Once again, Samsung treats the mass market with the respect it deserves, with the AU9000 (UE50AU9000) a deeply accomplished television. It’s excellent with native 4K content, upscales 1080p stuff confidently, and has one of the best smart TV interfaces around. And it’s much slimmer than you were probably expecting.

The Samsung AU9000 is the sort of range of TVs with which Samsung has always tended to excel – it attempts to deliver full-fat picture performance, with a healthy serving of smart TV functionality, at a semi-skimmed price. And given that it’s available in 43in, 55in, 65in and 75in versions as well as the 50in version we’re testing here, it attempts to be the perfect size for more-or-less any room, too.

Nothing exists in isolation, though, and Samsung is far from the only TV manufacturer attempting to woo customers with an enticing combination of performance and price. So does the Samsung UE50AU9000 have what it takes?

The Samsung UE50AU9000 is on sale now in the UK for £699, which is a pretty aggressive price, all things considered. Nevertheless, we wouldn’t be surprised to find it getting even more affordable sooner rather than later. That’s how it usually goes with Samsung’s mid-market ranges…

There are two ways to consider the design of the 50AU9000. The first is from straight-on, because that’s how you’ll be watching it. And when viewed this way, the Samsung is completely anonymous – but in a good way. After all, very few people want their TV to draw attention to itself, so design flourishes are pretty rare. The Samsung AU9000 is mostly screen, with quite narrow bezels across the top and down each side.

The bezel across the bottom is a little wider, and stands proud of the screen just a little, but I wouldn’t call it unsightly. ‘Inoffensive’ is sometimes a put-down, but not in this instance. Look directly at it when the TV isn’t switched on, and this Samsung is the best sort of inoffensive.

Looked at in profile, though, the AU9000 is a fair bit more interesting. Somehow Samsung has managed to keep the depth down to a super-svelte 26mm – and that’s a consistent depth, too. Unlike that OLED TV you’ve had your eye on, there’s no swelling or protuberance housing all the electronic odds and sods here. If you decide to wall-mount your new TV, you can be sure that it will sit as flush to the rear surface as any screen that doesn’t cost maybe five times as much.

However, if you’re not going to wall-mount your Samsung AU9000 then be aware that its simple plastic push-and-click feet are a) quite a long way apart, and b) feature some very welcome cable management. So you’ll definitely need quite a wide surface to stand it on – but at least you’ll be able to keep the wiring tidy while it’s on there.

The headlines with regards to features are exactly as you’d expect from a mid-range Samsung television. The UE50AU9000 is a 4K LCD TV with LED edge-lit backlighting, and it’s compatible with most of the HDR standards you’re familiar with: HLG broadcast, HDR10 and HDR10+ dynamic metadata.

As is usual with Samsung – and for reasons that only look more pig-headed with every passing day – there’s no Dolby Vision dynamic metadata on board here. So, despite the fact that the world’s most popular subscription video streaming service has its app front-and-centre on the Samsung’s Tizen smart TV interface, the 50AU9000 isn’t able to exploit that service’s potential.

It’s an egregious omission, and it’s one we’ll never stop complaining about –but in every other respect, the 50AU9000 has everything you can reasonably expect at this sort of money. The aforementioned Tizen interface remains as good as anything around: a stack of options, plus clean and straightforward menus, make getting to the content you want completely painless. And while there’s no Freeview Play on board, the 50AU9000 has every UK broadcaster’s catch-up app available.

Three HDMI inputs should be plenty – and one of them is eARC-enabled, so deploying your favourite soundbar is easy. There’s a hint of HDMI 2.1 specification available, too, with FreeSync and ALLM capability from all three, so at least some of the clever features of your next-gen console are catered for. In addition, there’s a pair of USB 2.0 inputs, an Ethernet socket, aerial post for the integrated TV tuner, and a CI card slot; that’s your lot for physical connectivity, and it really should be plenty. As far as wireless connectivity goes, dual-band Wi-Fi and Bluetooth 5.2 are available.

When it comes to controlling the screen, your choices are wider than you might expect. There’s a degree of voice control available via Amazon Alexa, Bixby or Google Assistant; see if you can spot the odd one out in that trio. Or you can jump through the various hoops required to get Samsung’s Smart Things app up and running, and once you’ve done so, it proves stable and useful. But there’s also a choice of remote controls – one is a small, plasticky wand with too many buttons, many of which are too small, but the other is a much less burdened and nicer-feeling alternative.

There’s a lot to admire in the way the Samsung UE50AU9000 deals with a 4K HDR10+ Blu-ray disc of Drew Goddard’s Bad Times at the El Royale. Most immediately impressive is contrast, if for no other reason that the AU9000’s peak brightness figure of around 350 nits isn’t exactly promising.

But while it’s true to say this isn’t the brightest TV you’ve ever seen, thanks to its ability to keep its white tones clean and detailed, they nevertheless pop against the winningly deep and equally detailed black tones. Impressive backlighting control, keeping blooming and haloing to a bare minimum, always helps in this respect.

Elsewhere, the 4K HDR10+ news is equally good. Detail levels are high across the board, and the amount of information the Samsung loads into skin-tones in particular is impressive. Colours are natural and convincing, with a degree of vibrancy when required but never over-driven. Plus, they’re wide-ranging enough to give expression to even subtle differences in shade or tone.

And where edge definition and motion control are concerned, the Samsung UE50AU9000 is similarly confident. With content of this standard there’s just no suggestion of the Samsung losing its grip of on-screen movement, and it draws edges with a deft and steady hand. There’s a definite suggestion of three-dimensionality to the 50AU9000’s images that most comparably priced alternatives would struggle to match.

Step down to some 1080p content and the Samsung remains a composed and convincing watch. Inevitably, there are drop-offs in pretty much every area: detail levels aren’t quite so high; skin-tones aren’t quite so naturalistic; colours aren’t quite so wide-ranging; motion isn’t quite so stable. But given the amount of work the 50AU9000’s Crystal Processor 4K is getting through, these shortcomings are minor in the extreme.

Beyond this, however, the Samsung can be seen labouring. If you’ve bought a shiny new 4K TV in order to watch antique 4:3 content on one of the nation’s lesser daytime TV channels, well, that’s your business – but the results here aren’t really all that enticing. Unless you’re into softness, vagueness and smearing in your TV pictures, there isn’t a great deal about the 50AU9000’s ability to upscale elderly programming to recommend it.

Gamers may hanker after full HDMI 2.1 capability to really maximise the potential of their new PS5 or Xbox Series X – but, then again, gamers really ought to know that’ it’s going to cost them a wee bit more than this.

Nevertheless, the Samsung UE50AU9000 is a very capable gaming monitor,. Its response times are well below 10ms and almost all the picture-quality positives already discussed hold true for games, too. And the ability to mimic the super-wide 32:9 aspect ratio beloved of some PC games is handy – even if the resulting image is more letterboxing than actual picture.

Would you be staggered to learn the Samsung is quite a bit less impressive in sonic terms than it is in picture quality terms? I doubt it – that’s usually the case with mid-market TVs.

To give the Samsung 50AU9000 some credit, at least it doesn’t become unlistenable at serious volumes – which is a trait that afflicts plenty of its rivals. It just gets louder. But the tonal quality of its sound is nothing to write home about.

‘Object Tracking Lite’ is the entry-level, Happy Shopper version of Samsung’s multi-driver object-tracking audio systems fitted to its more upmarket TVs. Here, it’s supposed to bring a sensation of height and width to the sound delivered by an array of two downward-firing drivers. Spoiler alert: it doesn’t.

What it does do quite comprehensively, though, is make the source point of sound vague and hazy. And while there are worse-sounding TVs out there, there aren’t that many that sound as resolutely matter of fact and unengaged as the 50AU9000.

So, yet again, you’re invited to peruse this list of the best affordable soundbars around. You won’t regret it.

You tend to watch information-rich content The Samsung looks an absolute treat with native 4K stuff, and it’s also a very adept upscaler of the sort of 1080p content that shows up on the majority of streaming and catch-up services.

You’re expecting sound to match those pictures
Samsung isn’t unique in treating the sound quality of its mid-range TVs as a bit of an afterthought, but it grates nevertheless (the attitude grates, I mean. The sound itself doesn’t have it in it to grate even slightly).

In almost every respect the Samsung UE50AU9000 is an admirable television and well worth the asking price. It’s picture quality from content of 1080p standard and upwards is impressive, its interface remains among the very best around, and it’s far slimmer than might reasonably be expected. Ignore the tedious sound and the lack of Dolby Vision HDR and there’s no way you’ll be disappointed. 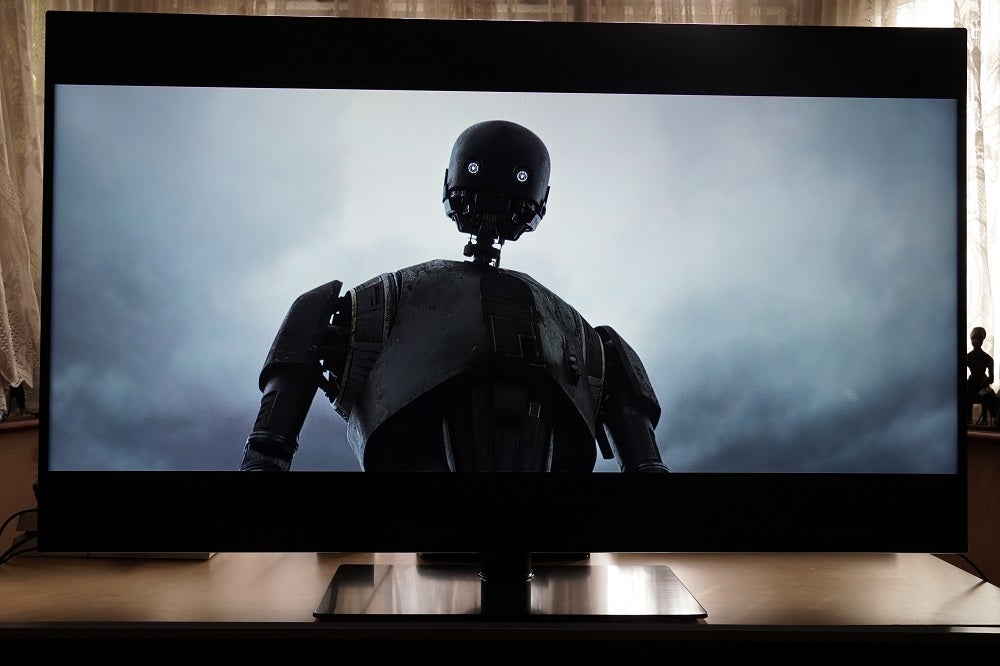 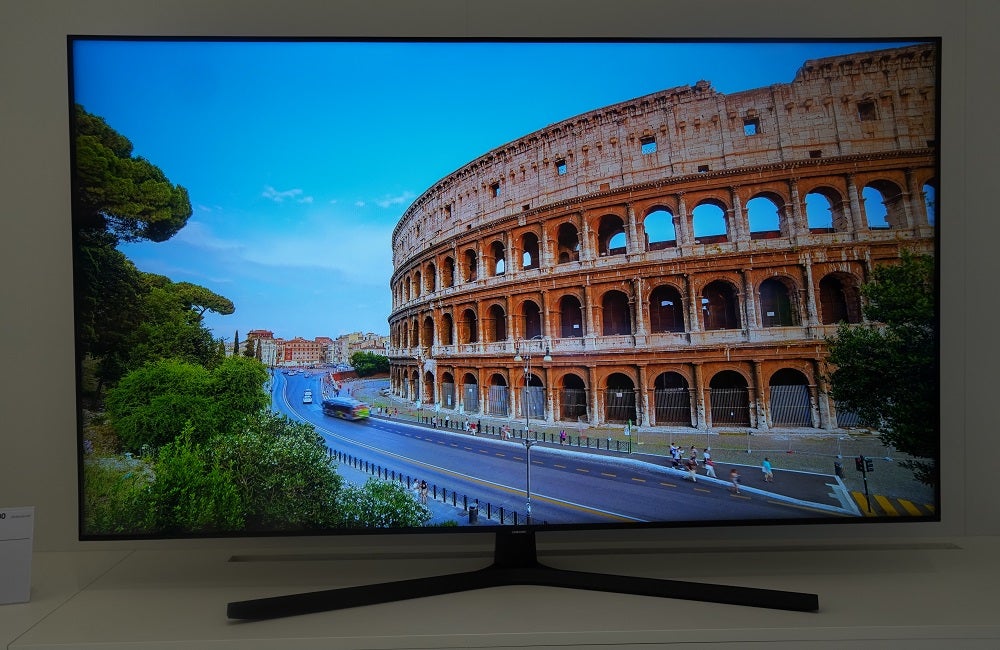