We’ve had an extensive play with Samsung’s brand-new Series 7 laptops, and they are – in a word – impressive. From their narrow bezels that allow nearly an extra inch of visible screen compared to similarly-sized rivals, to their higher-than-usual resolution, metal chassis, generous specs and backlit keyboards – not to mention an 8GB micro SSD with concomitant software to speed up hard drive access and app loading – you’re getting an awful lot for your money here. 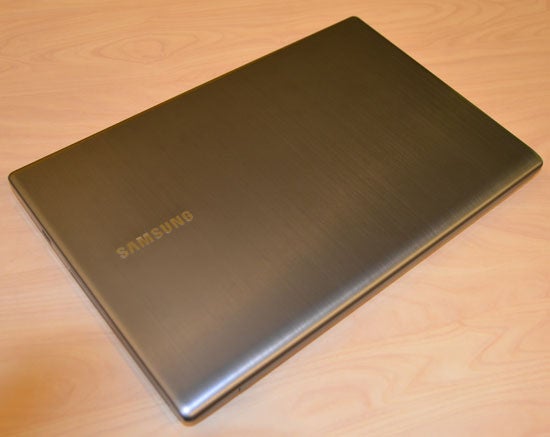 From our initial impressions, the Series 7 are being posited as the MacBook Pros of the Windows PC world, but without the associated high prices you might expect. Though there will be a 13.3in model down the line, the initial launch unit is a 15.6in affair, so let’s find out how it holds up.

First of all, there’s its note-worthy design. With stunners like the Series 9 under its belt, the Korean company is no stranger to classy design, but the style and build on show here are remarkable considering the cheap entry price. 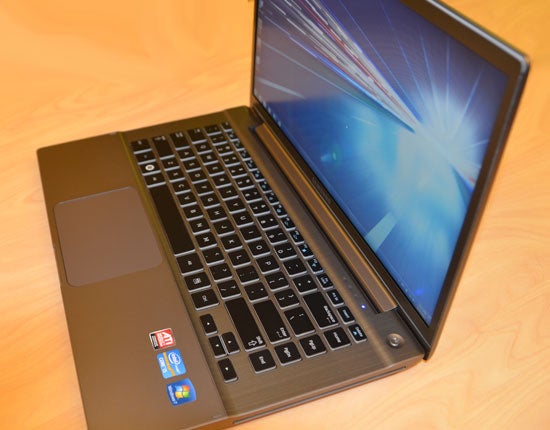 The Series 7 comes with an all-aluminium brushed metal exterior, that gives a unibody impression and is actually somewhat reminiscent [cough] of certain Apple products. Unlike the Series 9 it’s not glossy, thus preventing it being the fingerprint magnet that laptop was. It’s classy, premium and high-end, and its tight lines give it a streamlined appearance.

As you might expect, build quality feels great all-round. The only part of the chassis that’s conspicuously not metal is the palm-rest, which is faux metal plastic. Samsung claims this decision was made to keep the weight down, and it also ensures your palms never have to rest on a cold surface.

Though it’s all kept very discrete, Samsung hasn’t skimped on the connectivity either. On the left you get twin USB 3.0 ports, a ‘slim’ Gigabit Ethernet port (with pull-out flap as is found on many recent ultraportables like the Sony VAIO Z, a 3.5mm headphone/microphone combi port and both HDMI and VGA for video. The VGA port is a tiny micro-HDMI-like affair that requires the included adapter, and we’re happy with this compromise as it keeps the laptop pretty while causing little inconvenience to users of the dying
standard.

On the right you’ll find a USB 2 port and slot-loading optical drive, which is a DVD writer rather than Blu-ray – the first and only obvious concession to the Series 7 line’s affordability.

When it comes to usability, the chiclet keyboard with its black keys holds up very well. Layout is good, and the keys are nicely shaped and spaced. Key action is firm with adequate travel, and there’s not even a hint of flex. Best of all, the entire keyboard is backlit, making it great to use in the dark. 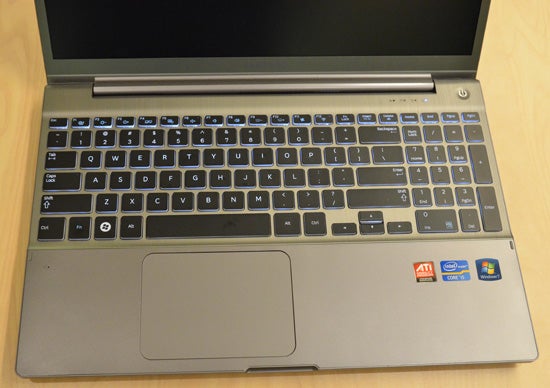 The touchpad, meanwhile, looks and feels almost exactly like Apple’s equivalent, which is a good thing. We called it the best touchpad we had used on the Series 9, and that hasn’t changed here. The single sheet of frosted glass is lovely to touch, with your finger gliding along smoothly without feeling slippery. The ‘buttons’ integrated into the touch-sensitive area work well and the pad doesn’t interfere with typing.

Getting to the Samsung Series 7 700Z’s 15.6in screen, it doesn’t quite manage to emulate the superb viewing angles or ridiculously high brightness of the Series 9 13.3in effort, but in every other regard it’s top of the TN class. To begin with, there’s its 1,600 x 900 resolution, which is higher than most rivals’ 1,366 x 768 (though some high-end 15in laptops tend to cram in Full HD panels). In our brief hands-on time we didn’t spot any backlighting issues or artefacts, and we found it to be reasonably responsive. 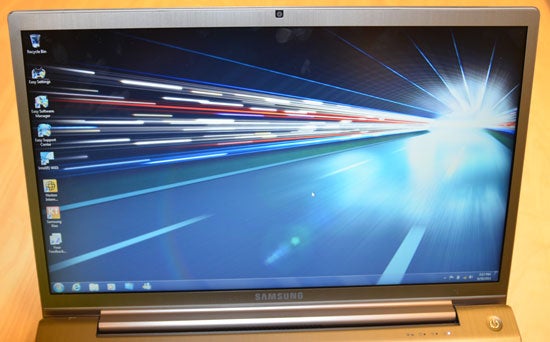 Best of all as far as panel quality goes, black levels were excellent, with deep blacks along relatively pure whites and good dark detailing. The icing on the cake is that Samsung has a new policy of making all its laptop screens matt, a decision we can’t help but applaud heartily. Likewise on the incredibly narrow bezel (by laptop standards), which lends the Series 7 a more compact profile compared to rivals with similar screen sizes.

Specifications-wise, the £799 base model comes with a Core i5-2430M backed by 6GB or RAM, a 750GB, 7,200rpm hard drive and Intel’s integrated graphics. If you do want a little more graphics grunt, the £899 and £999 configs come with dedicated AMD Radeon cards while upping the RAM to 8GB and, in the case of the flagship model, a quad-core Core i7-2675QM. That’s some serious power.

If you’re disappointed by the lack of SSD, there’s some consolation in Samsung’s use of Express Cache. This is a mixture of fine-tuned software and an 8GB SSD that’s built into the motherboard, in a pre-caching setup that’s similar to that used on Seagate’s hybrid drive – except here the SSD memory isn’t built into the drive, so you can upgrade to a larger model yourself without losing the extra speed. Brilliant!

As a result of Express Cache, boot-up times are significantly reduced and frequently-used apps will run faster. Though our startup test on the early preview sample we saw took just under 30 seconds (compared to an estimated boot time of 35 seconds with a regular hard drive), Samsung are hoping to get this down to under 20 seconds by launch. 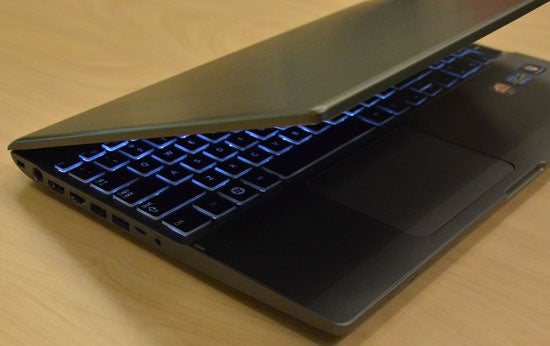 Last but not least, with eight-cell batteries across the models, battery life should hold up well too. To be quite frank, we’re very excited about the potential of this machine and indeed the Series 7 family overall, especially since they don’t demand a huge premium. They have all the elements in place to hold their own against established rivals like the Dell XPS 15z and then some, and we can’t wait to get one in for a comprehensive review.