The Galaxy TabPro S remains one of the best Windows tablets around. The stellar screen and battery life make it a solid, albeit expensive, alternative to Microsoft’s ageing Surface 3 and easily outclass Huawei’s competing MateBook.

Months on from release I wouldn’t reccomend you buy it right now, however. The Galaxy TabPro S’ shelf life as the best convertible is limited as there are a number of decent looking 2-in-1s on the horizon.

Asus is set to release its funky looking Transformer 3 Pro, which should have significantly better hardware (but is a wee bit more expensive) in the next few weeks.

Lenovo also has a stack of new convertibles in the works, including its satchel-friendly Yoga 900 S. The foldable laptop may be chunkier than the TabPro S, but it has equivalent specs and a solid physical keyboard that should be much more comfortable to type on.

I also expect Microsoft to unveil a rather overdue successor to its Surface 3 fairly soon – though this is pure speculation on my part.

Windows 10 Anniversary Edition’s release also slightly damages the Galaxy Tab Pro S’ overall appeal. Samsung’s bundled the device with a keyboard, not a stylus, which means buyers will have to shell out extra cash if they want to take full advantage of the Anniversary Edition’s coolest feature, Windows Ink.

Ink expands Windows 10’s native stylus support, making it so you can directly write into applications. It also adds a nifty new Sticky Notes feature that lets you add reminder note to applications or web pages. As an added bonus Cortana can contextually understand them and turn them into reminders, where relevant.

What is the Galaxy TabPro S?

2016 is rapidly turning into the year of the convertible. Over the past four months we’ve seen tablet-come-laptops from tech powerhouses such as Apple, with its 9.7-inch iPad Pro, and new players in the market such as Huawei, with it sleek-looking MateBook.

So you may well question why you should pay attention to Samsung’s Galaxy TabPro S – a device that at first glance looks all but identical to every other Intel Core M, Windows 10 convertible set to arrive this year. However, having got my mitts on the device, I can tell you that the Galaxy TabPro S is one of the most interesting – and difficult to review – convertibles I’ve tested in quite some time.

Recently, however, the company has managed to buck this trend with its smartphones, delivering truly gorgeous handsets such as its shiny new Galaxy S7. The Galaxy TabPro S is the first sign I’ve seen of Samsung’s improved design philosophy extending into the tablet space.

As tablets go, the device is outright stunning. The 12-inch convertible’s Gorilla Glass front and slightly rubberised back plate are housed within a classy metal frame. The combined effect makes it look like the tablet version of the Galaxy S7.

Samsung has designed the Galaxy TabPro S for use in a landscape, not portrait, position – like most convertible tablets outside of the iPad Pro. This may be an issue for those who want to use the device as an e-reader replacement on the commute to work. 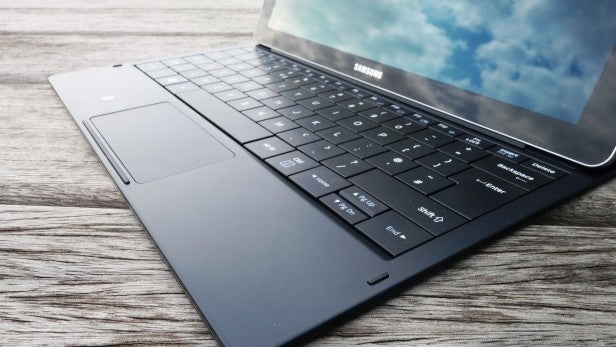 Unlike the iPad Pro, MateBook and Surface convertibles, the Galaxy TabPro S comes bundled with a keyboard dock. This is a huge deal, since competing devices charge as much as £120 for their keyboards.

With this dock in mind, the tablet’s aspect ratio makes slightly more sense; it means the Galaxy TabPro is one of a select few convertibles capable of functioning as a semi-laptop-replacement straight out of the box.

The device is also about as portable as you can get, with the ultra-thin keyboard doubling as a screen cover when closed – you’ll be able to throw the Galaxy TabPro into your satchel without worrying.

The tablet has accompanied me to and from the office for more than a fortnight now and it’s survived a variety of interesting encounters. The most concerning was an accidental meeting with a set of train doors, which the device survived unscathed.

Eariler I described the Galaxy TabPro S as only a “semi-laptop-replacement”, and this is because there are a few serious flies in the ointment. Chief among these is the TabPro S’s dire connectivity options.

The tablet section of the Galaxy TabPro S has a single USB Type-C charging port – and that’s it. There’s no micro-DisplayPort, SD, or full-sized USB ports. There isn’t even a back-up micro-USB. The keyboard is similarly lacking when it comes to connectivity. Unless you’re willing to shell out more cash for a multi-port adapter, you’re going to have zero wired connectivity options.

I understand that Samsung has designed the Galaxy TabPro S to be as travel-friendly as possible, but with prolonged use the device’s lack of ports becomes a serious issue. On too many occasions I found myself wanting – but unable – to carry out basic tasks such as connecting the Galaxy TabPro S to my scanner, or pulling files from a USB stick. 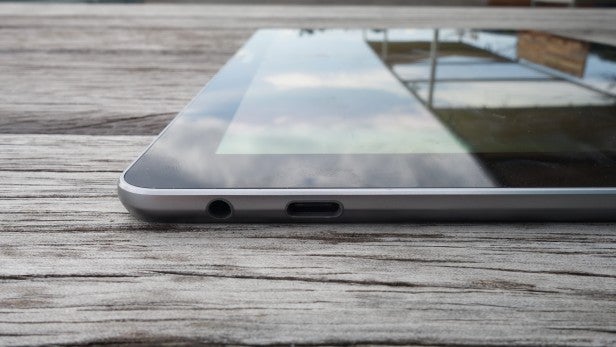 The lack of ports is indicative of wider issues with the keyboard dock. The keyboard isn’t the worst I’ve used by a long shot, but it also isn’t the best. It feels oddly similar to the first-generation Type Cover found on the original Surface Pro.

The keys are physical and full-sized, but they have poor travel and aren’t as tactile as I’d like. That said, they remain far better than the keys I see on many competing tablet keyboards, such as those on the iPad Pro, which have a horribly spongy feel.

I’m also not entirely convinced about the Galaxy TabPro S’s positioning options. In theory, the case should allow you to prop up the tablet section at two angles – one for when you’re using the TabPro S on a desk, the other for when it’s resting on your lap. This would be fine, but the tablet’s thin nature makes typing on anything but a desk a cumbersome, awkward experience. Even moderately heavy typing causes the tablet to lose balance and precariously rock when its being used on your lap.

The trackpad is a little better. It’s about the same size as that on the Microsoft Type Cover 4 and is suitably responsive in general use. Two-finger gesture commands are recognised without problem, and outside of my wider issues of using the Galaxy TabPro S on my lap, it performed admirably.

For those out of the loop, Super AMOLED is a Samsung-branded version of regular AMOLED technology. Screens that use the tech can display deeper and richer blacks, which are achieved by electrically charging each individual pixel to generate colours – meaning they can create blacks simply by cutting power to each pixel. The deeper blacks in turn make colours pop out more, improving the screen’s overall performance.

The Super part relates to the Samsung screen’s power consumption. Super AMOLED screens, according to Samsung, have lower power consumption as they integrate the capacitive touchscreen layer directly into the display instead of overlaying it on top. The placement removes the need for the device to charge two components at once.

The only trade-off with the tech is that colours can look a little overcooked compared to competing IPS screens. This hasn’t been a problem on phones, where colour accuracy isn’t quite so important. But on laptops and convertibles however, which you’re likely to use for digital painting or photo touch up work, it’s a bit of a problem. 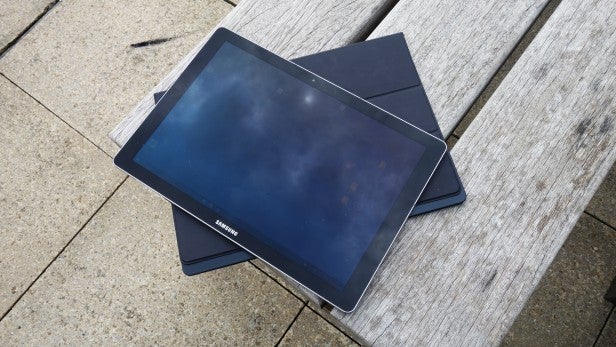 But, cracking out my trusty X-Rite colorimeter, I found my concerns were completely without merit – the Galaxy TabPro S absolutely blitzed all the screen tests I threw at it.

In its out-of-the-box Adaptive Display setting, the colorimeter picked up a darker than Mordor 0.00 black level and super-bright 367-lumens white level. The 7,661k colour temperature is a slight departure from the 6,500k ideal, but far from terrible, and the 3.88 Delta E puts it well above competing convertibles such as the Dell XPS 12.

But what really grabbed my attention is the Galaxy TabPro S’s stellar Adobe RGB and sRGB coverage. Out of the box the device covers 99.9% of the standard sRGB spectrum and an impressive 86.6% of the Adobe RGB – which is used by many artists and photographers.

To put it simply, this means theGalaxy TabPro S has one of the best displays I’ve seen on a convertible and is one of a select few devices that’s fit for creative professionals. The more expensive Microsoft Surface Pro 4’s screen covers only 96.2% of the sRGB spectrum and 68.3% of the Adobe RGB colour space, by comparison.

What’s more, thanks to the addition of Samsung’s custom “Galaxy Settings” you can actually adjust the screen’s settings, by picking between a series of more focused Cinema, Photo and Basic options. These all make slight differences to the screen’s charactersitics; Photo makes it more accurate with Adobe sRGB while Cinema mode was too much for my liking, with oversaturated colours.

The Basic mode is what I’ve settled on for day-to-day use, when not painting or touching up photos on the Galaxy TabPro S. It tones down the screen to give it a cooler 6,681k colour temperature and an almost perfect 1.65 Delta E – but at the expense of its Adobe RGB coverage, which drops to 68.2%. This means the screen generally looks more balanced for tasks such as web browsing and Netflix binging, but isn’t suitable for creative work.

The only problem I have with the Galaxy TabPro S’s display is that it’s so good it makes me wish Samsung had bundled it with an active stylus. Unlike the Microsoft Surface, you have to pay extra to get the Galaxy TabPro S’s Bluetooth C-Pen. Considering how great the screen is for designers, its omission from the standard bundle is a little disappointing. In fact, I’d rather they’d given me the C-Pen than the keyboard.