What is the Transformer 3 Pro?

Microsoft’s 2015 Surface Pro 4 was the ultimate tablet-come-laptop. Offering advanced stylus support, plus a nifty new keyboard cover that was actually comfortable to type on, the Surface Pro 4 remains one of the most flexible laptop replacements on the market.

Which is why it’s no surprise that we’ve seen all manner of new Surface-like convertibles, such as the Acer Switch Alpha 12, hit the market this year.

However, while its rivals may look the part, most have cut a few too many corners to truly challenge Microsoft. This applies to Asus’ Transformer 3 Pro too, but it remains a decent 2-in-1 machine nevertheless.

From a distance, the Transformer 3 Pro is all but identical in design to the Surface Pro 4. The only minor difference is that the Transformer’s metal chassis is slightly darker than that of the Surface and there’s an Asus, not Microsoft, logo on the back.

Some will complain about the lack of originality, but I’m all for it for the sake of practical computing. Too many convertibles’ attempts to be different have led to significant design flaws.

The Samsung Galaxy TabPro S looks nice and is super-thin, but the lack of a full-sized USB port makes it ill-suited as a full-on laptop replacement. The Huawei MateBook suffers the same issue, but also has a dire keyboard cover whose magnetic stand design makes it nearly impossible to use as a laptop. 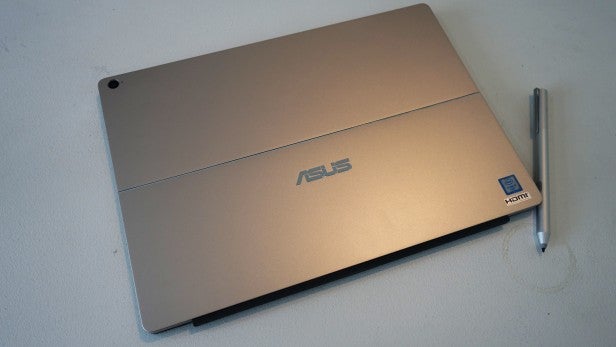 The inclusion of a kickstand makes using the Transformer 3 Pro as a laptop every bit as easy as it is on the Surface, and means you can manually adjust the angle at which you want the screen to sit. In addition, the single full-sized USB 3 port also makes it easier to use as a laptop than the MateBook and Galaxy TabPro S – although personally, I’d still have liked to see a second port for extra peripherals.

Asus has also made a number of small tweaks to the Transformer’s design that in my mind improve on the Surface’s connectivity and usability.

For starters, the Transformer 3 Pro charges using a regular USB Type-C cable. This may sound small, but I’ve always hated the fact that Microsoft’s Surface uses proprietary charging ports. Too many times I’ve thrown the Surface Pro 4 into my backpack and headed out for work, only to realise that I’ve left the cable at home and been forced to make an emergency U-turn to get it.

By comparison, the Transformer 3 Pro works with any USB Type-C adapter, so long as you have a plug with a high enough wattage. 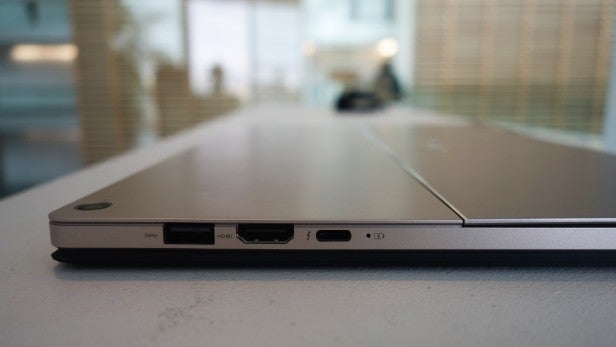 The inclusion of a full-sized HDMI, rather than mini-DisplayPort connector, is another welcome change that made it easy for me to connect the Transformer to my office monitor and use it as a full on work machine. The Surface can work in the same way thanks to its mini-DisplayPort, but most people are unlikely to have the correct cable lying around and will need to pay extra for an adapter.

My only qualm with the design of the Transformer 3 Pro is that the metal casing is a little too easy to scratch – even when compared to the Surface Pro 4, which itself wasn’t immune. My unit picked up a few dings along the way, and while I’m perhaps clumsier with my tech than some, I remain unsure where some of the marks came from.

I’m also a little annoyed that there’s no way to dock or store the active stylus, which makes it all too easy to misplace. It isn’t easy to search out a replacement pen from UK retailers at the time of writing, so you’d better take care not to lose it.

In terms of weight, you’re unlikely to notice the difference between the Transformer and the Surface Pro 4. With their keyboard covers attached, both weigh practically the same at around at 1.15kg and 1.13kg respectively. That’s seriously light. 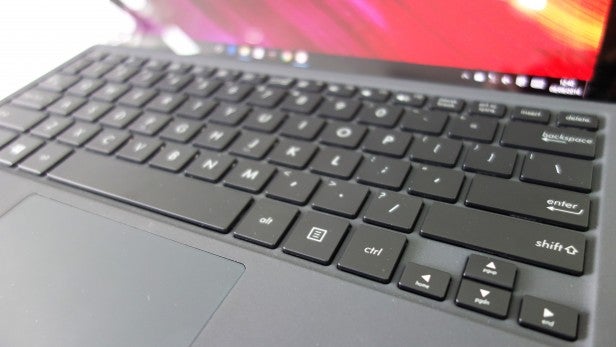 The keys are suitably spread out and feel noticeably more reactive than most Type Cover style peripherals. I wouldn’t describe them as clicky, but they have better travel than competing devices, like the MateBook, and don’t feel quite as spongy. The fact the keyboard is backlit is a minor, but welcome touch, that makes it easy enough to use the Transformer 3 Pro in dark rooms.

I’m less enamoured with the trackpad, however. It’s reasonably large, but a little schizophrenic when it comes to reading commands. The pad isn’t Microsoft Precision-certified and it shows. Basic one-finger commands work reasonably well, though rapid movements can cause it to go haywire. Multi-touch commands such as two-fingered scrolling are hit and miss.

Asus has made some important claims about the Transformer’s screen that will make it more alluring to creative types, with the screen capable of covering the sRGB colour gamut and a few colours beyond.

It has big shoes to fill: in most ways, the Surface Pro 4’s 12.6-inch display is excellent. The 2,736 x 1,824 resolution on the Surface Pro 4 ensures text and icons are sharp and the screen is excellent for regular use. However, its lacklustre coverage of the Adobe RGB required by many artists and photographers remains an issue. The Surface’s screen covers only 96.2% of the sRGB spectrum and 68.3% of the Adobe RGB gamut. 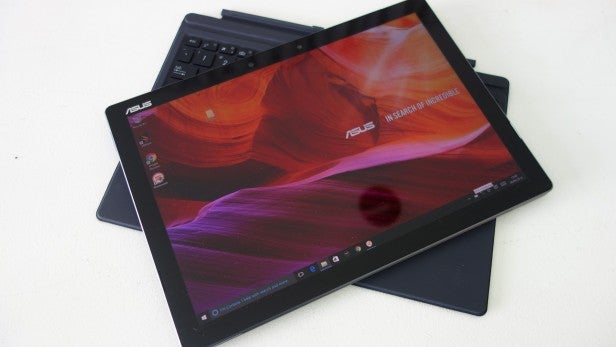 The Transformer performed marginally better than the Surface. The screen managed a very similar sRGB figure and was capable of showing a greater portion (76.1%) of the Adobe RGB gamut.

The 252.4 nits maximum brightness and 0.1150 black level also give it a perfectly adequate 997:1 contrast ratio, making for detailed images that have plenty of “pop” to them. The 7,125K colour temperature is a little above the 6,500K ideal, but that won’t be much of an issue for anyone but professional photographers and videographers – most of whom will need a more powerful device anyway.

With the stylus in hand, I also found the screen more than good enough for basic digital painting and sketching. It uses stylus tech from Wacom, which is my preferred choice. The Surface, meanwhile, uses N-trig hardware. The N-trig stylus tech is generally designed for rapid note-taking, and as a result can be a little hit-and-miss for precision artwork, where things such as pressure sensitivity are more important.

My only qualm with the Transformer 3 Pro’s screen is that it’s fairly reflective. Using the convertible outdoors, the screen regularly picked up stray light and became difficult to read. This is a problem I experience on pretty much every tablet, laptop and phone I test, but it felt more pronounced on the Transformer 3 Pro – perhaps because the screen’s brightness isn’t a high as your average tablet.