The Galaxy TabPro runs using the professional version of Microsoft’s Windows 10 operating system. For me, the use of Windows 10 is a key selling point, differentiating the Galaxy TabPro S from convertibles such as the Apple iPad Pro and Google Pixel C.

This is because, despite what Microsoft says about Universal Apps, Windows 10 is a desktop – not mobile – operating system first. This means it has key features, such as legacy application support, that competing Android Marshmallow and iOS 9 operating systems lack.

This gives Galaxy TabPro S users a much more diverse set of applications from which to choose, and it means they won’t be forced to use stripped-down, touch-focused versions of Photoshop and InDesign. It also opens the door to freeware, such as GIMP, Krita and Blender, which means you won’t necessarily have to break the bank buying expensive licence codes.

Add to this the productivity benefits of Microsoft’s own desktop services such as Office 365, and the Galaxy TabPro S quickly becomes a compelling device for buyers looking for a solid mobile productivity unit, or sketch pad.

Samsung has also kept bloatware to a minimum, loading the Galaxy TabPro S with only a few custom services and apps – the majority of which are either unobtrusive or actually useful. 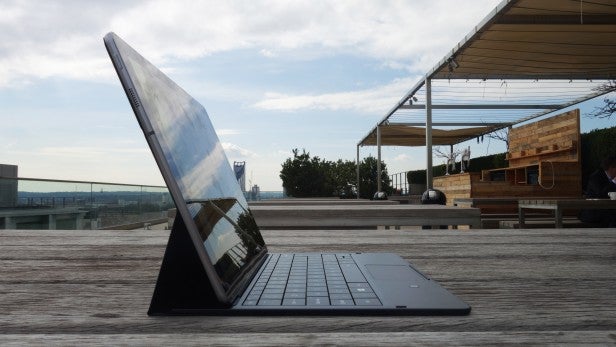 I say “unobtrusive” because most are designed for Samsung Galaxy smartphone owners – a group to which I don’t belong, so as a result I didn’t get to test.

The best of these is the Galaxy TabPro S’s Samsung Flow feature. Flow is basically Samsung’s answer to Apple’s Continuity. The Cliff Notes explanation is that it lets you pair your Galaxy devices, so you can view and respond to incoming messages and notifications to your mobile on the tablet. As an added bonus for Samsung phone fans, Flow also means you can use the Galaxy S7’s fingerprint scanner to unlock the Galaxy TabPro S.

My only issue with the Galaxy TabPro S’s features stem from its default Galaxy settings. They instruct the Galaxy TabPro S’s screen to automatically dim after one minute of inactivity. This would be fine, but I found the feature is a little finicky; it would inexplicably activate at random times. For example, streaming video on CrunchyRoll or YouTube, the Galaxy TabPro S wouldn’t recognise the services as a process and would dim the screen after a minute, ruining my viewing experience.

The Galaxy TabPro S doesn’t make it explicit that the feature is controlled in the Galaxy – not general system – Settings. This led to me spending a good hour wondering why the dimming continued to occur after I’d told the screen to not sleep or turn off in Windows’ built-in settings menus. As an added faff, you can’t instruct the screen to never dim in the Galaxy Settings. The best you can do is instruct it to only turn the lights down after 10 minutes, not one.

When it comes to silicon credentials, the Galaxy TabPro S isn’t the most blinging convertible out there. It’s powered by a dual-core Intel Core M3 processor and fairly piddly 4GB of RAM.

Neither spec is cutting-edge. M is the bottom rung of Intel’s current processor family and focuses on power efficiency more than performance. In the past I’ve found that M-powered tablets with anything less than 8GB of RAM can be prone to performance slow-downs with anything but basic tasks. Considering the tablet’s £800-plus up-front cost, I’m surprised that Samsung hasn’t loaded the Galaxy TabPro S with more memory.

These figures aren’t terrible, and are a definite improvement on some of last year’s Intel Atom-powered convertibles, but they put the Galaxy TabPro S behind competing convertibles such as the Surface Pro 4 and iPad Pro. The iPad Pro ran in with a more robust 5,523 multi-core score on Geekbench, by comparison.

I didn’t get to test the basic Intel M, 4GB of RAM version of the Surface Pro 4, but the Intel Core i5 model with 8GB of RAM I tested ran in with a much beefier 6,727 multi-core Geekbench score. 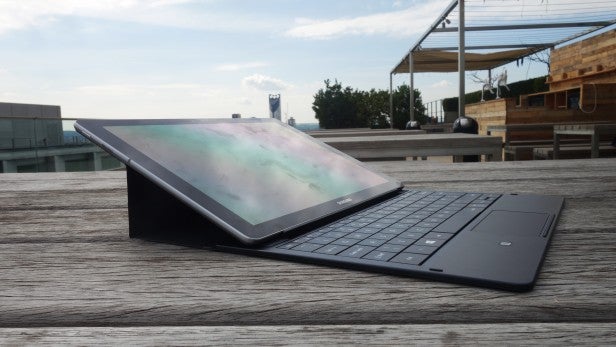 I count the i5 Microsoft Surface Pro 4 as a baseline for acceptable performance for a professional Windows 10 tablet that will be used for 3D modelling or big digital painting projects. If that’s what you’re after, then despite the TabPro S’s amazing screen, you may want to look elsewhere.

My real-world impressions of the Galaxy TabPro S’s performance were a little more positive. For general web browsing, video streaming, small digital-painting projects and general office tasks, the Galaxy TabPro S is more than fast enough and smooth to use.

However, ask anything more from it and small performance issues begin to creep in. Games from the Windows Store generally run okay, but if you try anything else then the Galaxy TabPro will struggle – even Minecraft crashed on it. 3D modeling on Blender became chuggy on larger projects, and I wouldn’t even attempt any video editing on the Galaxy TabPro S.