What is the Huawei MateBook?

The MateBook is Huawei’s first attempt at a Windows-powered laptop replacement, taking on the likes of the Microsoft Surface Pro 4 and Samsung Galaxy TabPro S. With a 2-in-1 design that includes a detachable keyboard and a stylus for drawing and making notes, this should be a great-value, versatile machine.

However, with its cut price and Huawei’s inexperience in this market, there is a myriad of flaws that prevent the MateBook from being anything more than an also-ran in the 2-in-1 race.

Note: No UK pricing or release date has been announced for the MateBook, so our review price is based on a conversion of US pricing (inc VAT) at the time of publishing.

The MateBook tablet by itself weighs just 640g, which makes it comfortable to hold and very easy to sling into a backpack. It feels great, with rounded edges and a reasonably grippy aluminium back. It’s a classic tablet design. At just 6.9mm thick, it’s the thinnest Windows tablet around, which is impressive.

On the top you get the power button and a pair of stereo speakers, while on the right there are two volume buttons with a fingerprint reader sitting between them. Also on the right is the single USB-C port that’s used for charging and data transfers. You’ll need the optional dock add-on ($89) in order to use this port for anything else, which is a pain. On the left is a microphone hole and a 3.5mm headphone jack.

If you want to get any serious typing done, you won’t be buying the MateBook without its Portfolio Keyboard. It costs an extra $129 and comes in the form of a faux-leather case that fully covers the MateBook when closed, and is kept secure using a magnet and a set of pins for data. 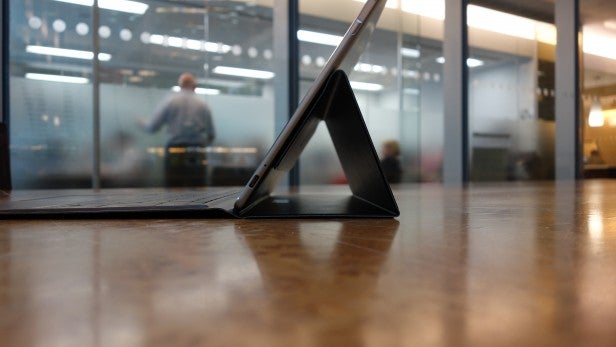 It’d be comical if it weren’t so frustrating.

First, the keyboard case stand… The stand has two positions: one that’s comfortable and another that’s too steep for most regular use cases. To stand the tablet up you need to find the sweet spot where the magnets actually connect – which is done purely through guessing and knocking the tablet over – and then slide it up and down between positions. If you eventually manage this, you’ll have to be careful not to knock the tablet, as it’ll go tumbling with a firm jab or if you accidentally push it backwards into another object on your desk. 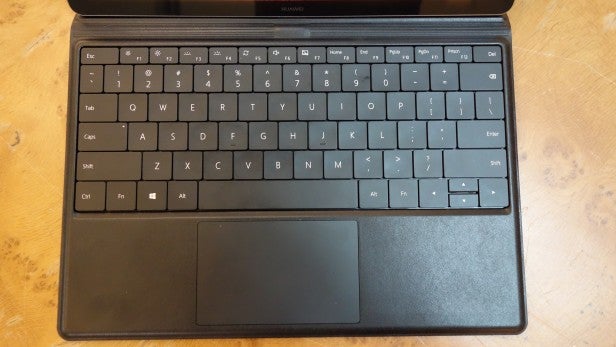 The keyboard is equally difficult to use, and despite hours of typing on the MateBook I never became fully comfortable with its cramped design, shallow key travel and the fact that it sits flat on the desk with no elevation whatsoever. It is at least backlit, but the top row of function keys doesn’t have any media functionality, and there’s no on-keyboard volume button.

The touchpad is nothing to write home about. It’s a bit too small for my liking, and I found it was slower to respond to my first touch than most other touchpads.

The optional MatePen ($59) is very good, with 1,024 points of sensitivity and two built-in buttons for performing on-screen actions. I found it more than usable for sketching and note-taking, and the MateBook’s palm-rejection algorithms are spot on; I had no problems whatsoever with my hand being detected as an on-screen touch.

There aren’t any Huawei-branded pieces of software to make better use of it, so you’ll be limited to whichever applications you use for drawing and note-taking, although the upcoming Windows 10 Anniversary update with Windows Ink support should improve things somewhat.

The MatePen also has a third button for a laser pointer, which will come in handy when using the stylus as a presentation clicker. The stylus is charged via a Micro USB connector that’s supplied in its box, and Huawei claims it’ll last up to 100 hours on a single charge. That’s not particularly great – the Surface Pen supplied with the Surface Pro 4 has a claimed battery life of 18 months, although that stylus requires an AAA battery, while the MatePen’s cells are integrated. 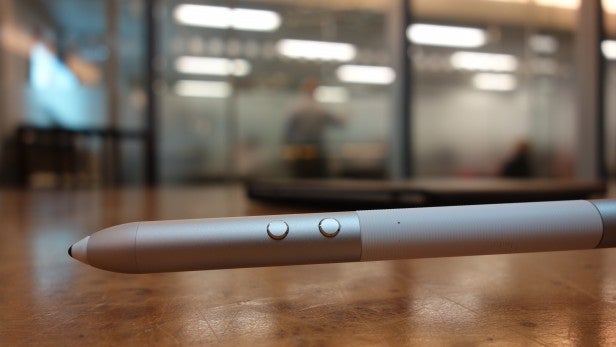 The MateBook’s best feature is its fingerprint scanner. It hooks into Windows Hello, which is Windows 10’s new security protocol, and lets you log in using just a tap of your finger. It’s as fast as the fingerprint reader on the Huawei P9, which itself is the fastest in the business, and makes logging in a painless process. It’s not as seamless as the facial-recognition system on the Surface Pro 4, but it’s still a welcome addition.

The screen is a 12-inch, 2,160 x 1,440-pixel IPS panel that’s capable of displaying 99.8% of the sRGB colour gamut and 82.8% of the wider Adobe sRGB gamut. This puts it neck and neck with the Samsung Galaxy TabPro S, and well ahead of the Microsoft Surface Pro 4. Maximum brightness is excellent, at 380 nits, while contrast is reasonable at 829:1.

Its wide coverage means photographers and designers will be pretty happy with it, which is a fairly big reversal of fortunes for this otherwise flawed machine.

The speakers built into the MateBook are forgettable. They’re reasonably loud, but they don’t deliver much depth of sound. They’re good enough for a bit of TV streaming and not much else.

The microphone, meanwhile, does a good job of cancelling out the background noise of a lively office, but the actual audio quality is very poor.

Finally, the front-facing camera is of decent quality, coping with challenging backlit scenes and keeping good focus on faces in shot.