What is the Samsung Galaxy Tab S3?

A new top-end Android tablet is a rare occurrence these days, and after using Samsung’s Galaxy Tab S3, I can sort of see why.

This iPad Pro-chasing tablet is good-looking, fast and has a gorgeous screen, but I can’t fully recommend it because the Android user experience on a tablet still isn’t quite up to scratch. Samsung has tried its best, but the future for high-end Android tablets isn’t looking too rosy.

Who knows, maybe the Samsung Galaxy Tab S4 will fix the S3’s issues, but for now this is far from the best tablet experience around.

The Galaxy Tab S3 is a mixture of the very best and the very worst of Samsung’s industrial design. It’s thinner than an iPhone 7, with a flat back and slightly curved sides that make it a pleasure to hold. Weighing in at just 429g it’s also noticeably lighter than the latest iteration of the regular iPad. 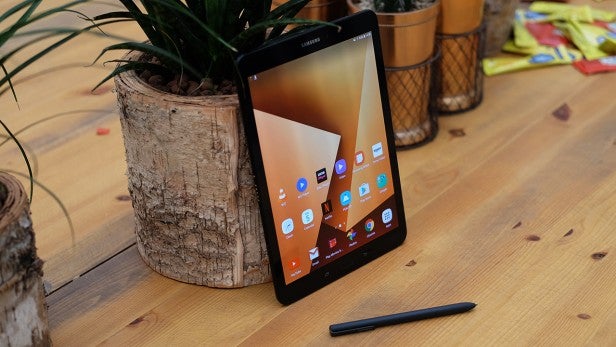 The Tab S3 is about the same size as an iPad Pro 9.7-inch, but the all-black colour is a hue I’ve been wishing Apple would introduce for its tablets since the matte-black iPhone 7 arrived.

There are clicky volume and sleep buttons on the side, while the headphone jack and USB-C port sit slightly off-centre on the bottom. Like the iPad Pro, four speakers are dotted around the tablet and they have some software trickery that angles the sound depending on how you’re holding the device. There’s also a very fast fingerprint scanner below the screen, flanked by two capacitive ‘back’ and ‘overview’ buttons.

It’s a stunning piece of kit, until you start using it. The glass back, for me, is a wrong step for a tablet. After using the Tab S3 for a few minutes the behind becomes completely covered in oily fingerprints.

I also expect tablets to be much more durable than a phone, mainly because they spend a lot of time being bunged inside a bag or passed around a group of people. An iPad can comfortably live inside a full rucksack without getting damaged, but I’m already starting to see tiny marks appearing on the Galaxy Tab S3. I understand a glossy, glass back might be a flashier design choice, but I’d prefer a matte metal back. 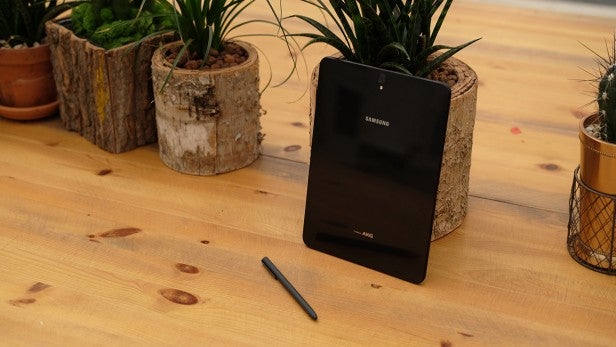 Samsung has knocked it out of the park with the display on the Galaxy Tab S3. The screen is so good that it sits in the same league and in some ways surpasses the iPad Pro 9.7-inch’s True Tone panel, which is one of the best I’ve ever seen on a tablet.

The thing that really gives it the edge over Apple’s tab is the screen tech used. While Apple uses IPS LCD panels, Samsung uses AMOLED, which allows for much richer colours, deeper blacks and a more immersive screen for bingeing on media.

The tablet packs the same 2048 x 1536 resolution as the Tab S2, but it’s now HDR-enabled when you’re watching supported content either through Netflix or Amazon Prime. HDR (high dynamic range) gives much greater peak brightness, with blacks appearing deeper and more natural as a result. 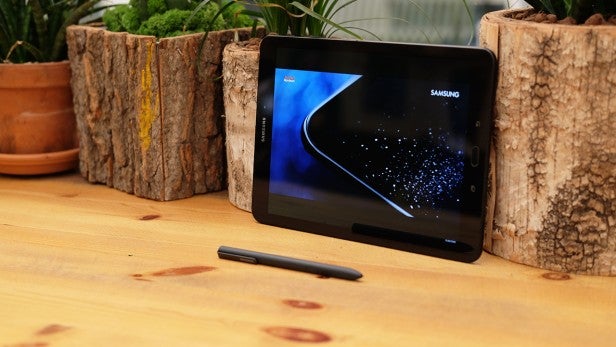 The demo HDR footage I’ve seen looks tremendous. It’s a shame neither Netflix or Amazon has updated their mobile apps to support it yet, and there’s no word on when that might happen, which means for now the HDR support feels a little superfluous.

The screen’s much more colourful and saturated than the iPad Pro display, which can look a tad dull when they’re both side by side, but this is where the S3’s lead ends.

The Tab S3’s screen doesn’t perform as well in bright light due to its overly reflective coating, which I’ve found is particularly annoying on trains. It also lacks any of the True Tone tech found in the iPad Pro, which alters the colour temperature depending on your environment and makes reading in the dark easier on the eyes.

Luckily, the media experience is made even better thanks to the four speakers. There are two on the bottom and two on the top, and they’re tuned by the audio gurus at AKG.

They’re decent speakers, with plenty of volume and the positioning means noise will come out in all directions, but they do have a tendency to feel like the sound is far away from you and being pushed the wrong way. This might have something to do with the software that’s supposed to alter the sound depending on which orientation you’re holding it in. Even with this issue, they’re much better than the majority of tablet speakers.