The last machine released as the Dell XPS 12 featured a wacky, horizontally spinning screen as a solution to the convertible laptop/tablet hybrid conundrum. With this latest iteration, however, Dell has completely thrown out that idea and gone with a detachable tablet and keyboard dock system instead.

The 12.5in Windows 10 tablet slides into the dock to provide a true laptop-like experience with a fully backlit keyboard and quality trackpad. It also folds flat and comes with a fabric cover to complete the folio-esque feel. Has Dell finally nailed the hybrid formula?

Aside from the Gorilla Glass front, the rest of the unit is made from magnesium alloy painted in a soft-touch black finish. The result is a hybrid that’s incredibly light yet strong and comfortable in the hand. 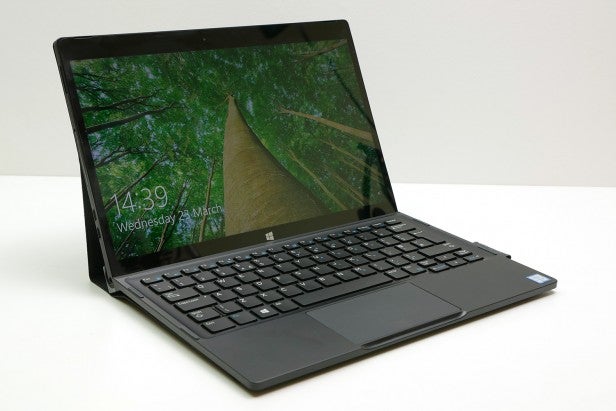 This quality feel continues to the keyboard dock, which gets the same finish and feels reassuringly rigid. A quick tap of the keys and trackpad also suggest they’re premium-grade inclusions.

The tablet is quite square, so it doesn’t nestle in the hand quite as well as an iPad. However, the XPS 12 really isn’t the sort of tablet that’s meant for casual, one-handed use. It’s just 12mm thick and weighs 790g on its own, compared to 723g for the iPad Pro, which is a noticable amount more.

Meanwhile, the simple flat back of the tablet allows it to rest securely on a flat surface, allowing you to type or draw on the screen without annoying wobbles.

The dock and tablet attach via a set of gold contacts on the bottom edge of the tablet. Slot it into the slot on the dock and the magnets pull the tablet into place. A couple of plastic tabs help to stop the tablet from sliding around in the slot, ensuring the docking works flawlessly every time. 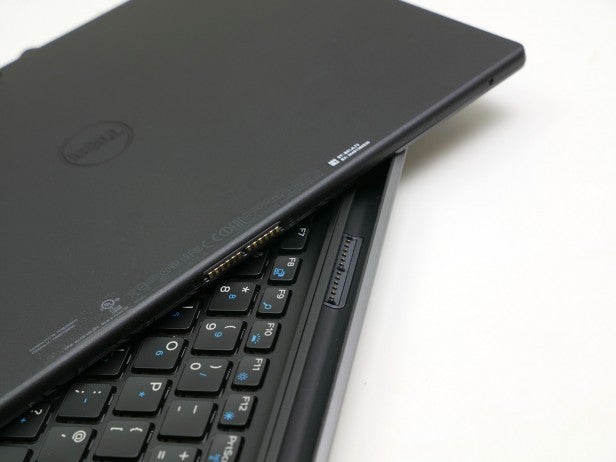 The magnetic connection is so strong that you can lift up the entire unit by the tablet alone; the angled support means the tablet stays secure when picked up via the dock too.

When you’re finished working on the tablet it can be folded flat just like a laptop, thanks to the clever dock slot that guides the tablet round as you lower it. The pull from a further set of magnets takes over as the two get close, holding the sandwich together. 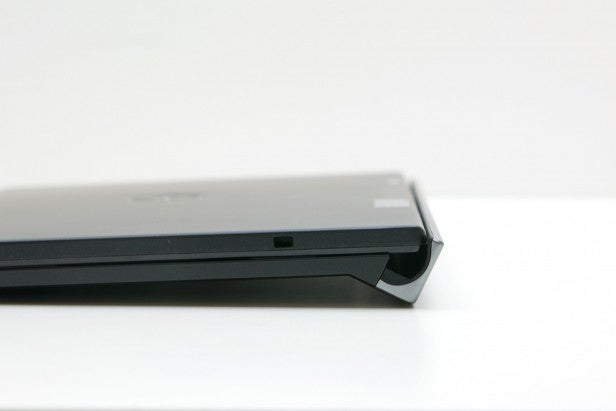 The operation works in reverse, too, allowing you to grab the front of the tablet and pull it open just as you would the lid of a laptop. Although it doesn’t do anything quite so clever as bringing the tablet straight out of standby, it’s far easier than many other such systems.

To complete the folio feel, a fabric-backed and rubber-lined magnetic cover wraps around the entire unit, with both stiff and hinged sections allowing it to sit flat on the tablet and dock while also bending as you open and close the device. The cover can even be used with only the tablet, and has a loop for storing a stylus.

The huge downside to this whole system is that it adds considerable thickness to the dock. Where the slot section juts out at an angle, the combined tablet/dock combo is 24mm thick, which could potentially make the setup that little too big to slide easily into your favourite bag pocket or protective sleeve. 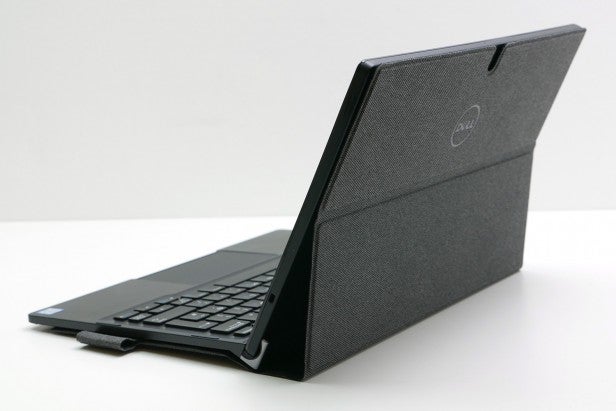 Also, unlike the Microsoft Surface Book, the dock doesn’t contain any batteries or any extra ports, nor does it boost the connectivity. Instead, it draws its power from the tablet and uses it to power the keyboard and trackpad.

As such, connectivity is limited. The tablet includes two USB Type-C sockets – also compatible with Thunderbolt 3 – and a microSD slot. It’s great to see Dell embrace the new connection type, but the lack of full-sized USB sockets means that you’ll always need to carry an adapter (one is provided). Thankfully, you do at least get two Type-C sockets, so you can charge your laptop and plug in a second device without the need for an adapter – unlike the MacBook.

Otherwise the tablet is entirely typical, with a power button on the top right edge (along with a Kensington lock slot), and volume buttons and a headphone socket on the left. Below the flap that covers the microSD slot is room for another slot, presumably for a SIM, but this feature hasn’t yet been added – at least to UK versions of the hybrid.

The XPS 12’s dock may only offer the addition of a keyboard and trackpad, but when they’re as impressive as this, it would be churlish to complain. Plain and simply, they’re the best you can get for a tablet/dock system such as this. In fact, they’re as good as the very best you’ll find on a laptop.

Admittedly the keyboard is slightly more compact than a typical laptop – it’s even slightly smaller than the already compact Dell XPS 13 at 358mm across – but it benefits from an excellent layout. For a start, it’s actually a proper UK configuration plus all the major keys are close to full-size. The key action is excellent, too, with decent travel and a clearly defined break. 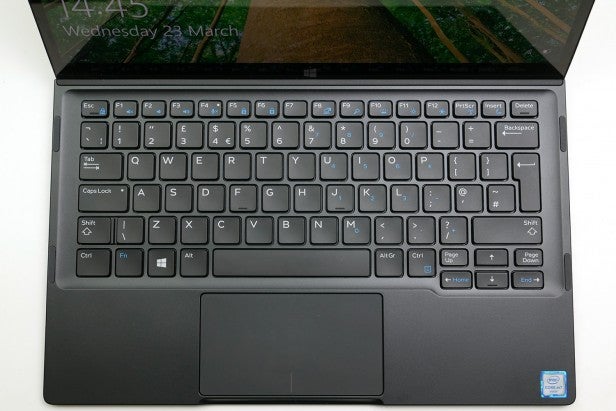 The keys are backlit, with even a couple of different brightness levels from which to choose. I really can’t overstate the usefulness of key-backlighting and thus how much it raises the status of the XPS 12 over most other hybrids.

My only complaint is that I’d have preferred the PageUp and PageDown keys to be made into secondary functions of the Up and Down keys in order to create a little space around the cursor keys.

The trackpad is also superb. The etched-glass top is delightfully smooth and the single-click surface is responsive and has a defined but lightweight click. What’s more, the tracking is spot on and perfectly setup right out of the box – no need to tweak the sensitivity in the driver.