The Galaxy Note 7 has the same CPU and GPU as the six-month old Samsung Galaxy S7, but that’s no bad thing. The 4GB LPDDR4 RAM and Exynos 8890 CPU is a potent combination that can handle intensive and day-to-day tasks with ease.

During my synthetic benchmarks, the Note 7 scored a respectable 2,118 in the single-core Geekbench 3 test and 5,924 in the multi-core version. That’s pretty much on par with all the flagship phones I’ve reviewed this year. The Note’s 129,729 score in Antutu 6 is also almost exactly the same as the Galaxy S7 Edge’s. Its 2,139 3DMark Sling Shot score confirmed its solid graphics performance.

Galaxy phones of old were packed with high-end components, but still lagged due to software issues. Luckily Samsung’s fixed the problems on the Note 7. Apps open instantly on the Note 7 and there’s no slow animations or janky scrolling. 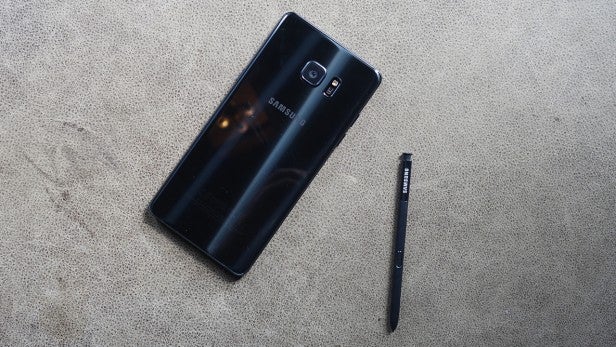 There’s also 64GB of extremely speedy UFS 2.0 internal storage. Samsung isn’t offering any other storage options, but there’s a microSD card slot that can be used to add a further 256GB of space.

Past Samsung phone speakers have always been a little disappointing, and this hasn’t changed on the Note 7. The downward facing speaker is loud and fine for YouTube, but it’s poor compared to the HTC 10.

Call quality is absolutely fantastic, with the mics picking up clear audio and managing to block out any irritating background noise. 4G/LTE signal, on both Three and EE’s UK network, is also strong and steady.

Steve Jobs famously said that ‘if you see a stylus, they blew it’, but Samsung has long marketed Note phones’ S Pens as a key selling point. 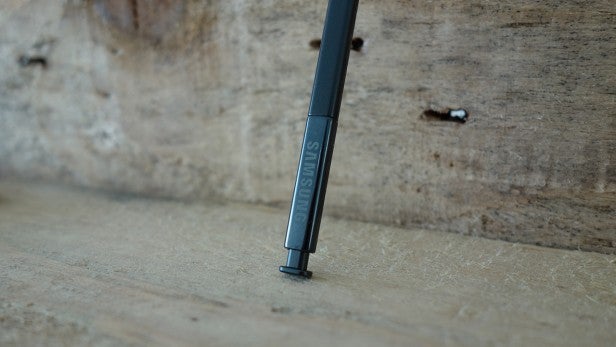 I must admit, even though I have used every iteration of the Galaxy Note line I haven’t found myself itching for a stylus once I switched to another phone. I have no qualms saying that the S-Pen in the Galaxy Note 7 is the best one yet. But has it converted me?

In some ways, yes. There are certain tweaks and software enhancements that make the S Pen more than just a writing tool. GIF creation, for one, is intuitive and fun. Start a YouTube video playing, pop out the pen and you can create up to a 15-second GIF. It works as advertised, but it’s the easiness that makes it great.

A GIF I made of our hench AF fitness editor Rich Easton. Why wasn’t I an artist you’re probably asking yourself.

I’ve also fallen slightly in love with the translation mode, even though I don’t think it works very well. The idea here is that you bring up a picture of a menu completely written in French, drag the S-Pen across specific words and it’ll translate them in real time. It’s quick and intuitive, but not always accurate.

It managed to translate some very basic words and knew ‘pain’ was bread, but it couldn’t work out ‘oignons’ meant onions. At this stage it’s unreliable, but could be great if Samsung spends a little time fixing it.

The S Pen’s increased 4,096 levels of pressure sensitivity makes it the most precise S Pen yet. The figure puts the Note 7’s S Pen on par with the Surface Pro 4‘s Surface Pen and over twice as sensitive as the Note 5’s stylus. This makes drawing and writing much smoother and the change is instantly noticeable on the Note 7.

Watercolours blend into each other, pencils shade and pens are pin sharp. I’m no Picasso, but I could still get some averagely drawn stickmen out without much trouble.

Related: Is the iPad Pro a good artistic tool?

Note taking is also better’, but the Note 7’s screen is still a bit small for me personally. That’s probably because I have been using the iPad Pro for so long. Either way,I love how you can pop out the pen and write on the blank screen, sliding it back inside to save the memo.

Samsung has tidied up its software on the Note 7, combining all its S Pen related apps into ‘Samsung Notes’. It’s very similar to Apple’s Notes app, with drawing, painting and text all bound together in one spot. It looks good, has a simple UI and offers a nice range of pens, effects and brushes.

I haven’t really spoke much about the stylus itself, because there isn’t much to say. It’s thin sliver of plastic, with an addictive clicky top and a single button halfway down. It satisfyingly slots in and out of the phone and as usual doesn’t need to be charged or paired. It’s small, but still feels big enough to write comfortably.

Setting it up is easy – it’s quicker than adding a fingerprint – but in real life use it’s little more than a James Bond-esque addition that sounds way cooler than it is. The scanner is finicky to use as you have to have it level with your retinas to get it going and then swipe up on the lockscreen. This makes it a much slower overall process than the fingerprint scanner.

Setting up the iris scanner 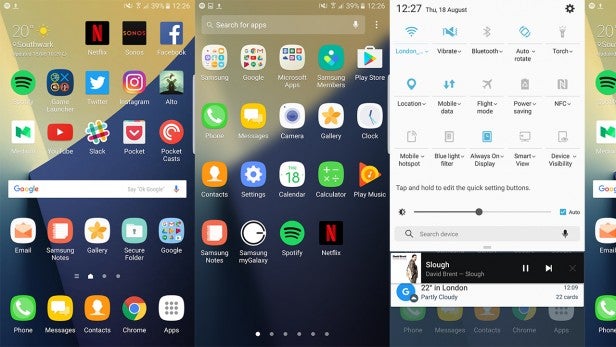 The UI on Note 7, which runs atop Android 6.0.1, is the sleekest and starkest version Samsung has ever made. It’s whiter, with pastel shades and less in your face colours. But, it’s still recognisably Samsung software and looks nothing like Marshmallow on a Nexus 6P. Samsung pushes you towards its own apps, its own services (it still has its own app store and cloud backup) and Google’s versions are hidden away in a folder.

To give Samsung credit, the software is so much better than it was even two years ago, but I still prefer Google’s alternatives for browsing the web, email and so on.

There are a couple of Samsung software tweaks that I really like, though. Split Window – having two apps side by side – might be coming to Android in Nougat but Samsung has been doing it for years and manages to make it work without any sort of slow-down or dodgy behaviour. 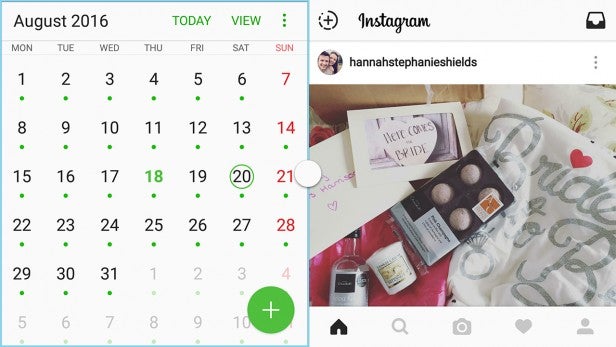 A new Blue light filter mode reduces blue hues and turns the screen orange, making it better for late-night reading. Like Apple’s Night Shift, it can be scheduled so it kicks in at the same time every night.

Instead of having Google Now on the leftmost homescreen window, there’s Upday. This is a basic news aggregator that works in a similar way to Flipboard, pulling in the latest articles from your favoured topics. The feature is a little hit and miss with its recommendations, during my time with the Note 7 it seemed to think I love celebrity gossip, but I generally found it useful nonetheless.

A particularly nifty software feature is the Secure Folder. This is far more than just a folder that’s locked away behind a passcode, as it actually acts as a separate OS. 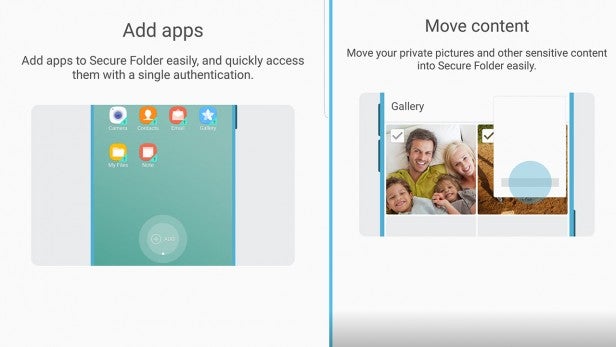 Throw the Twitter app in there and it’ll be a clean install, letting you add a completely new account. It’s backed up by Samsung’s Knox software and can be secured by a fingerprint, iris, password or passcode. I can see this being useful to not only hide your secret second personality on Twitter, but to also, ahem, conceal those pictures you don’t want to accidentally scroll through in a business meeting.

The big question though is when will the Note 7 will get Android 7.0 Nougat? Well, Samsung says ‘soon’. Hopefully that means before 2016 ends, but I won’t be holding my breath.

One major negative I still hold against Samsung’s phones is that they don’t yet have an Apple Pay rival set-up and available in the UK. Samsung Pay has been around for ages in the USA, South Korea and a smattering of European countries but it still hasn’t hit the UK. I’ve been repeatedly told it’s coming soon, but until then at least there’s Android Pay.

To make those ‘Edges’ – the curved portion of the display – seem more than just something to lust over, Samsung has Edge apps that aim to put the curves to use. 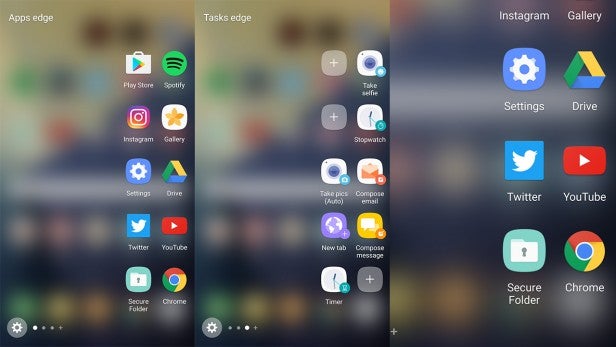 Developers can build extensions for the Edge, but there hasn’t been a whole load of them introduced since the launch of the Galaxy S7. Yahoo, for instance, made one for quickly swiping in and checking the news. It’s more of a novelty than something you’ll actually use everyday, but it’s nice to see Samsung is at least trying to do something different here.