What is the Microsoft Surface Pro 4?

The Surface Pro 4 is Microsoft’s latest high-end tablet/laptop hybrid. Its incredible desirable design and powerful hardware still, more than a year on, make it one of the most desirable devices on the market today.

Updated: Since I first reviewed the Surface Pro 4, the market has changed somewhat, with numerous rivals arriving on the scene. To its credit, the Surface Pro 4 has remained Trusted’s favourite 2-in-1, but the latest entry into the laptop market could be seriously tempting for fans of Microsoft hardware looking for an upgrade. The Surface Laptop, announced in May 2017, is everything that was great about the Surface Pro 4 but in laptop form, starting at under £1000. You can read more about it in our guide to the Surface Laptop.

There are more games afoot, too: Microsoft has announced an event for May 23 that looks likely to be some sort of hardware reveal. While the Surface Pro 4 is still an excellent piece of kit, it’s well overdue a refresh, so my money’s on a Surface Pro 5. It might be worth waiting to buy until then, although with the number of discounted Surface Pro 4s on the market right now, you won’t be losing out if you buy the current-gen model right now.

Below continues my original review from late 2015.

The Surface Pro 4 doesn’t rework the wheel on the design front. The tablet section of the Surface Pro 4 looks almost identical to the Pro 3 from a distance. It has the same metallic-grey magnesium finish; the same adjustable kickstand; and only slightly more svelte 292 x 201 x 8.4mm dimensions.

Some will view the lack of immediately noticeable changes as a negative, but for me it’s no bad thing. The Surface Pro 3 breathed new life into the Microsoft series of devices when it replaced the boring, boxy black design of the Surface Pro 1 and 2 in 2014, and it remains one of the nicest-looking convertibles on the market.

The Surface Pro 4 Intel Core i5 model I reviewed was also suitably satchel-friendly, weighing a meagre 786g – the Intel Core M variant weighs an even more modest 766g. It also has the same USB 3.0, mini-DisplayPort and microSD connection options as the Surface Pro 4, meaning that it will happily meet most users’ connectivity needs.

If you take a more thorough look at the Surface Pro 4, however, you’ll realise that Microsoft has addressed several niggling issues with the design. The most obvious of these being the Surface Pen’s new docking mechanism. 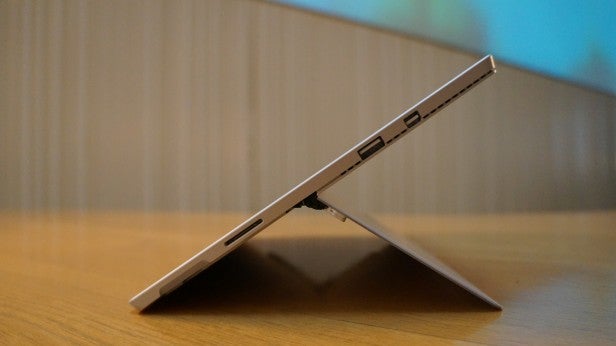 In theory, the docking system works in the same way it did on the Surface Pro 3, using a magnetic lock to hold the stylus on the tablet’s short side. I wasn’t a fan of the system on the Pro 3, because the magnetic lock was quite weak and the pen would detach itself when met with even the slightest of nudges. The position of the lock itself was even more annoying, since it placed the pen over the tablet’s physical power and volume keys.

These flaws have been fixed in the Surface Pro 4 by first, moving the power and volumes keys to the tablet’s top, long edge; and second, by increasing the strength of the locking magnet. Using the Surface Pro 4 as my main laptop and tablet, the Surface Pen never once detached itself from the device, and proved capable of clinging to the tablet section even when the Pro 4 was thrown into a fairly full satchel and lugged around London.

You can pick up the Pro 4 with either 128GB, 256GB or 512GB of SSD storage. The wealth of cloud storage services available on Windows 10 means that running out of space won’t be a concern for the majority of people.

These changes may sound insignificant, but it’s systemic of Microsoft’s overall strategy with the Surface Pro 4. The company has made a series of subtle improvements that are small when viewed on their own, but add up to create a vastly improved user experience overall.