OPINION: Is Apple’s iPad Pro and Apple Pencil the perfect combination for artists? We let our in-house artist Alastair Stevenson take it for a spin and see.

Apple has never shied away from making big, sweeping claims about its hardware. Back in the day Steve Jobs claimed Apple created the smartphone market, when he unveiled the first iPhone, despite the fact Nokia had technically beaten the company to the punch with Symbian.

Having worked as an artist and been a staple fan of everything from Wacom tablets and design PCs to Microsoft’s Surface Pro 4 I took this claim with a pinch of salt.

After all, how could a tablet running a mobile operating system previously focused on entertainment and mobility offer all the services and tools an artist, or designer needs?

As it turns out, for the most part it can, or at least could in the near future. 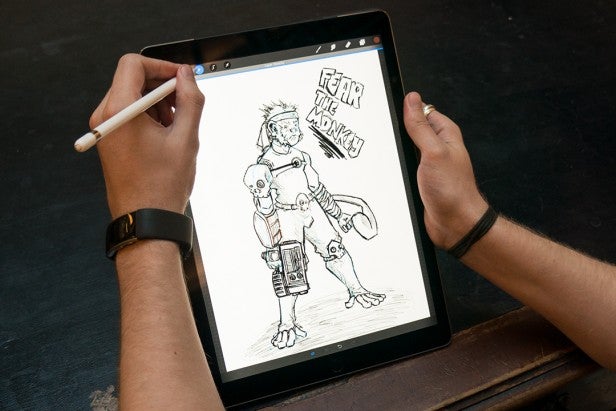 To be a great design tool a device needs three things; an impressive stylus, a well calibrated display and top notch software.

On the first two fronts the iPad Pro ticks all the right boxes. I didn’t get a chance to check how much of the Adobe RGB the display covers. But it’s sizable 12.9-inch dimensions mean it is suitably large for general sketching. The iPad Pro’s 2048 x 2732 resolution screen will also meet most doodlers needs, and ensure photographers can accurately edit shots.

I was also surprised how much I liked the Apple Pencil. Apple’s a newcomer to the stylus market – Jobs famously claimed any product with a stylus was dead in the water back in the day – and competing technologies from Wacom and N-Trig are more established and work on across multiple device categories. 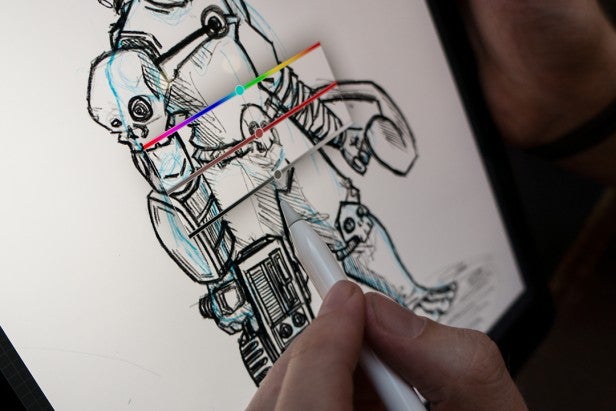 But powering up Adobe Sketch on the iPad Pro I found the Pencil is capable of matching, if not beating more expensive active styluses in a number of areas.

Ease of use is the Pencil’s biggest draw. Many other active styluses require specialist drivers to properly work on specific programmes or touch screen enabled devices. This isn’t a problem for most Photoshop, Illustrator or InDesign users as Adobe is pretty good at rolling out updates for bigger products, like the Surface Pro 4.

But, if you’re on a budget and use freeware, like Krita or GIMP it’s a big annoyance. To date people that try to use Krita on the Surface Pro 4 will be met with a blank, unusable black screen and GIMP still doesn’t recognise pressure sensitivity for the numerous styluses, including the Surface Pen, out of the box. To get these functions you have to go through a tricky and time consuming hunt for drivers and manually install them. 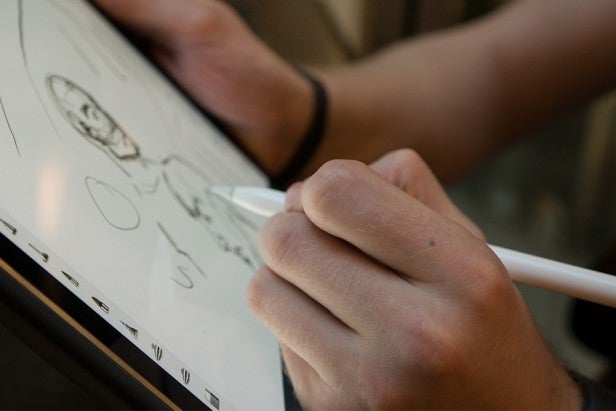 Apple’s always been great at making things easy and simple for its users and this carries on with the iPad Pro. The iPad Pro and Apple Pencil come with the functions and correct software pre-installed. The moment you power up Adobe Sketch, Sketchbook or Procreate the the Pencil works and the apps recognise everything from pressure sensitivity, to the stylus’ angle and orientation.

The Apple Pencil is also nicely responsive. For starters let’s discuss latency – an issue on many styluses where there’s a delay between when the pen touches the screen and a command is registered. Apple claims the Pencil has next to no latency and from what I’ve seen it’s definitely come close.

The iPad Pro and Pencil are lightning fast compared to things like the Surface Pen, or Dell Active Stylus – where there’s a millisecond delay between the pen drawing a line and it appearing on the screen.

However, that’s not to say it’s perfect. During frantic doodling sessions where I was shading or hash shading, latency did begin to creep in – though not to the point the Pencil ever felt unusable. 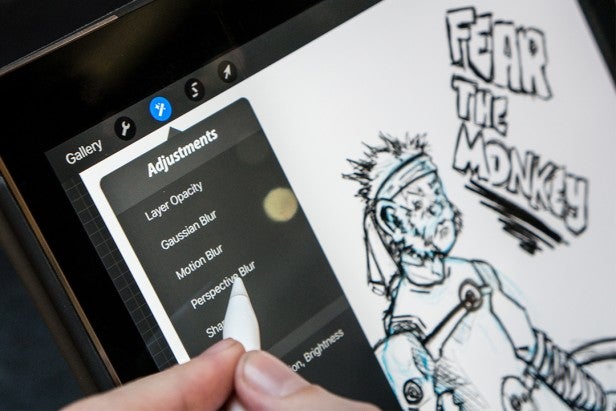 The Pencil tip’s two tilt sensors also impressed me and let me create accurate charcoal and pencil lines when sketching in Procreate and Sketchbook. The sensors communicate with iPad’s display to track the Pencil’s orientation and angle. This then lets it accurately adjust the style of brush stroke or pencil mark that’s rendered on the iPad Pro.

If you place the tip at a flat angle on the screen when using Procreate’s pencil tool, a flatter, lighter mark will be rendered on the screen, for example.

The tech works a treat and made it easy for me to use the iPad Pro for basic, background design work, like character sketches and thumbnail page compositions. 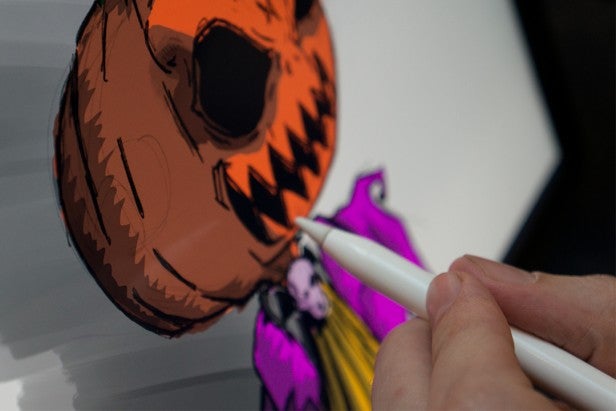 But it’s not perfect

This sounds great, but the iPad Pro’s artistic issues don’t stem from its hardware. The fact is, despite Apple’s stellar work getting pencil support into iOS creative apps, critical features and tools are still missing.

Adobe Sketch is missing important tools, like Magic Wand and Clone. All you get are basic pencil, pen, brush and smudge tools. There are customisation options but they’re severely limited and don’t offer the granular level of control you need to create a truly great digital painting.

Procreate makes a noble effort to fix these issues and is the best creative tool on the iPad Pro. It adds an array of proper selection tools, multi touch support, handful of filer options for things like Noise, and Sharpening, alongside more robust brush customisation options. 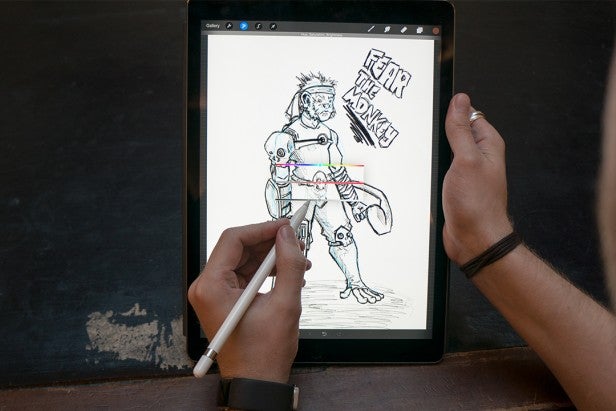 However, again it falls short of matching the performance of desktop creative packages, such as Photoshop and GIMP. The brush controls still aren’t as precise as I’d like and Procreate’s lack of an easy to access colour matcher and undo function makes colouring posters and comic book pages a painful and laborious experience.

This isn’t to say the iPad Pro is useless as a design or artistic tool. For basic layout work and penciling it’s great. But as it is, the creative packages on offer aren’t powerful or developed enough to complete a comic page or poster using just the iPad Pro.

To get truly great results, I had to export projects I’d started on the iPad onto my desktop and complete them using the full version of GIMP paired with my trusty Wacom Intuos.

That said, because the issues are nearly all software related, I can see the situation changing if Apple continues the great work getting third party app developers on board. Here’s hoping this happens in the near future.

Have you been using the iPad Pro for drawing and sketching? Let us know in the comments box below