We all love surround sound. Unless you’re severely aurally challenged, having at least 5.1 sound will make a huge difference in movies and games; I’ll never forget the first time I ”heard”, rather than saw, a creature skittering around me in the PC-game version of The Thing. However, awesome as it might be to have five large speakers and a giant sub-woofer blasting away, there are several considerations that make this impractical for many.


First there is obviously cost, as a decent 5.1 setup doesn’t tend to come cheap. Then there is space: in order to create a plausible sound-stage, you need a minimum size room. Another concern, especially for owners of older notebooks, is that they might not have more than stereo out. The most common one is probably people living in the same house and neighbours, who selfishly don’t appreciate you rumbling the walls with explosions at three in the morning.


Well, headsets are an obvious solution, and today we’re looking at a model that might just have all the answers: the Saitek Cyborg 5.1 Gaming Headset. Using a headset lets you experience your multimedia at any volume you want, and wired 5.1 models tend to be relatively affordable. Saitek also caters for people who don’t have surround sound outputs on their PC/notebook, with the common trick of integrating a USB sound card. Basically, any machine that has USB 2.0 running XP or Vista will be turned into a fully 5.1-capable device – at least as far as the headphones are concerned. 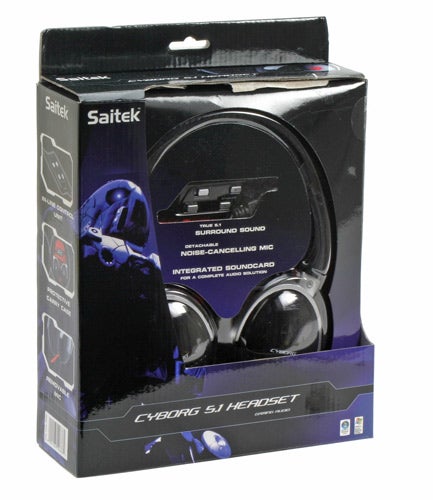 There are only two immediately obvious downsides with this Cyborg headset, however: there is no provision to hook it up to consoles with anything but stereo, and as it lacks rumble/vibration, you won’t ‘feel’ explosions and thumps in the same way as you would with a proper sub.


Some people remain unconvinced by headphone rumble, and I can see it being a personal taste, but most of its detractors haven’t tried it on a good set. Owning the Tritton AX360, a top-end Dolby-certified 5.1 headset with its own dedicated hardware decoder box, I can confirm that – if done properly – rumble makes a lot of difference. Oddly enough, Saitek seems to think so too, as its low-end stereo GH20 Vibration Headset sports it. It seems a pity that the company haven’t included this feature on the 5.1 model for those who want it; after all, if you don’t like it you can just turn it off. It seems unlikely that it was excluded just to keep the price down, since at £54.80 the Cyborgs are more than twice the price of models offering comparable specifications. 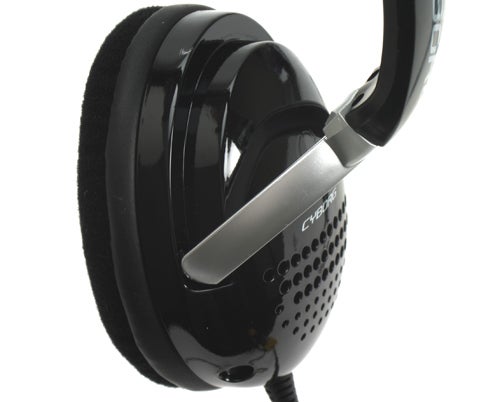 The package is fairly basic: apart from the headset itself, with its detachable noise-cancelling microphone, you get a driver CD, multilingual user-manual and case. The user manual looks and feels cheap, but is clear and not prone to the hideous ‘Engrish’ you often encounter.


The included hard case comes in two halves which require assembly through the simple process of zipping the two pieces together. It feels kind of cheap and can’t take much pressure, but is one hell of a sight better than nothing. It does look the part with a textured nylon outside and red felt-covered moulded-cardboard inside. Also, it will protect your headphones against scrapes and scratches, which is important considering their glossy piano-black finish.

Portability is certainly a strong point of this headset, considering it is a 5.1 model (hello, LAN-Party!). Rotating cans and a detachable microphone let it get as compact as you can expect, and clicking it into the moulded depressions of the hard case takes under half a minute. In addition it’s very light, with the whole bundle including case weighing a mere 482 grams.


When you first plug the headset in using USB, the somewhat ugly Cyborg logo (a half human, half robot face) on each cup gets lit up in two different colours: red on the left, green on the right. Saitek seem to be giving all their recent products multicoloured LEDs, which looks jarring, cheap and inconsistent. It does give Cyborg products a unique look, but it’s at best an acquired taste.


A pity too, since the rest of the headset is really quite attractive. The ear-cups are foam with a leatherette trim, and a glossy black hard plastic back with a nice perforation pattern. The hinged cup-holders are silver, while the headband is semi-matte plastic with the Cyborg name in muted grey, with a leatherette-padded section in the middle. 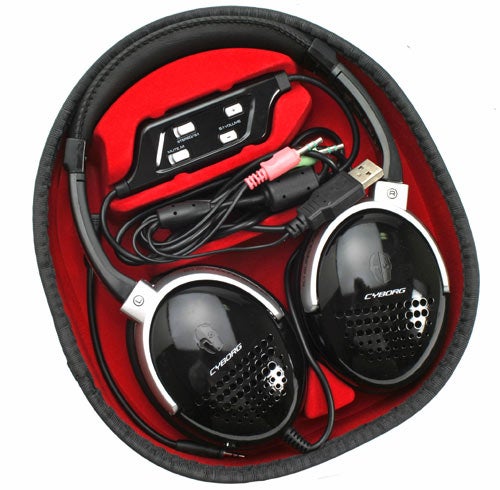 Unlike the solid construction of the excellent Saitek Eclipse Keyboard, these new Cyborgs do not hold up as well. Build quality is not bad, but it’s hardly exceptional; there is some creaking when adjusting the headphones, and flex on the plastic of the headband. Frankly, you’d expect a bit better for the price, and overall the set feels ‘plasticky’.


When it comes to wearer comfort though, Saitek has done an adequate job. Adjustment is pretty much standard for headphones. The cups (or cans, if you’re from across the Atlantic) can be rotated flat and are hinged, so they will always sit close against your ears. 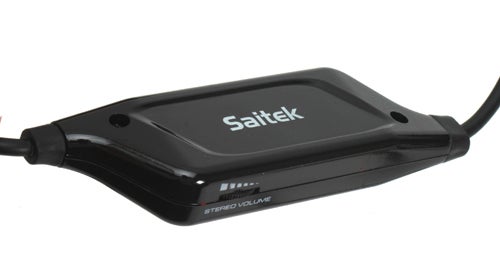 The foam padding is sufficient, and because they’re circum-aural (surrounding your entire ear) the cups form a closed sound-stage. The main niggle here is that they don’t quite feel large enough to allow my ears to be comfortable for extended periods.


The headband can be lengthened, and thankfully the extending sections are metal, so won’t break like cheap plastic ones tend to do. Annoyingly for the perfectionists among us, increments are barely notched, so both sides might not be equally adjusted by the time you’re finished. However, this does make it easier to adjust the headband while wearing the Cyborgs. The headband padding is again adequate, but a little more wouldn’t have hurt.


It’s only when you compare Saitek’s most recent efforts to other sets, like the light Icemat Siberia headphones, that you realize the Saitek’s are a tad confining, clunky and heavy; putting on the Icemats felt like a relief. A fairer comparison might be with my 5.1 Trittons, which despite being far heavier are still more comfortable, thanks to large amounts of padding. Basically, the Cyborgs are comfortable enough to get by with, but not the ideal set for hours-long gaming sessions.

Cable length is great: two metres ought to be enough for most situations. The cable terminates in one USB plug and stereo microphone and headphone plugs. The large glossy-black inline controller has a selection of options, including silver 5.1 volume buttons, a stereo volume dial, stereo/5.1 switch and microphone mute. The only additions it could have done with are a volume-mute button for the actual phones themselves, and some form of bass/treble control when switching between things like games and music.


While the Cyborg 5.1 Headset will work over USB if you just plug it in, you need to install the driver to make software adjustments, and Saitek have provided a mini-game and an aural demo to let you experience the surround sound. However, installing on an XP system installed the game and demo, but not the driver, while two Vista systems gave the opposite result; giving us access to ”some of” the driver’s functions but not the game or demo. 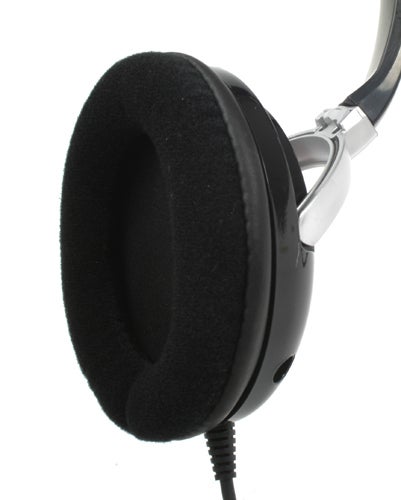 Not that you’d be missing much, as these two applications are a prime example of poor software more likely to ”put” you off the product than ”show” it off. That aside, the part of the driver I managed to get working was basic, but covered all the important bits. You’ll want to set your system to ‘6 speakers’, which incidentally matches the number of physical sonic drivers in the Cyborgs (compared to eight in the Trittons).


Firing up some good old Farcry and a bit of COD4, I put the headphones through their gaming paces – and they didn’t disappoint, but that was simply because I wasn’t expecting too much. Compared to my Trittons, positional audio was nowhere as clear; in this regard, they barely outperform a decent stereo set with virtual surround. Audio quality when gaming is not as good as the AX360 set either, lacking the range and clarity of treble, and the punch of bass. In their defence, the Saitek headphones do give you a sense of depth that most stereo models can’t quite match.


Microphones are pretty difficult to get wrong these days, and thankfully the detachable one included with the Saitek headset is decent. It picked up everything I said, shouted and whispered clearly, and didn’t pick up on too much background noise either.


Premium music listening is obviously not a primary target for gaming headphones, and audiophiles will want to steer clear. In general, this headset is bass-heavy, and just a tad muddy in general with treble especially lacking distinction. If you’re not too picky though, the Cyborgs are fine, providing quality roughly equivalent to a £20 stereo headset you can buy on the high-street. 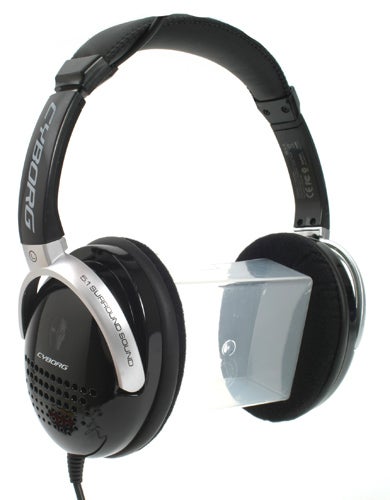 However, here we come to the main problem with the Saitek Cyborg 5.1 Headset: it’s not £20, but £55. While this headset is adequate in most respects, it doesn’t excel in any – and personally, I would happily pay twice as much for a Dolby certified Tritton or Sharkoon 5.1 set, which come with their own decoders and multiple digital and analogue inputs. Moreover, since the Cyborg’s don’t offer any of these options, there’s very little separating them from mediocre offerings that can be had for less than £20.


Even the best 5.1 headsets won’t give you an experience equivalent to a real 5.1 speaker system, but they can come pretty darn close. Unfortunately, the Saitek Cyborg 5.1 Headset doesn’t even play in the same room. Though it’s not a bad set as such, there really is nothing here to justify the rather high asking price.