Available now on Xbox One and PS4 (version tested)

There’s an episode in season seven of The Simpsons, “Scenes from the Class Struggle in Springfield”, where Marge finds a Chanel suit on clearance. Seen out and about in the designer brand, she’s soon catapulted into the upper eschelons of Springfield society, but increasingly has to refashion and recut the garment to maintain her new status.

Resident Evil: Revelations is starting to look very much like Marge Simpson’s endlessly re-stitched Chanel suit, and like the snooty ladies of Springfield, one might wonder how many more times the game can be repurposed. First released on Nintendo 3DS in 2012, it’s since been reanimated in high definition on PS3, Xbox 360, Wii U and PC, and now comes to current gen consoles.

What’s different? Not much, to be brutally honest. At its heart, it’s the same game as the last time Trusted Reviews looked at Revelations, just looking marginally better and with a few tweaks to controls and bonus material. 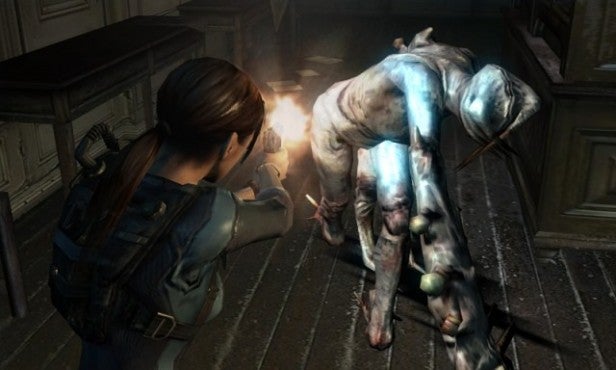 The game opens with series stalwart Jill Valentine boarding the cruise ship Queen Zenobia in search of her old friend and ally Chris Redfield. Trapped on board, the pair – plus a handful of largely forgettable new characters – find themselves caught in the middle of another series of horrific experiments with bio-organic weapons that have, true to form, once again gone disastrously awry.

Originally released episodically, the HD re-re-master maintains that structure, making for short, snappy segments of action-horror gameplay. It remains a nice approach to the Resident Evil formula, providing cliffhanger moments on a regular basis to keep your attention on the story. The setting remains one of the franchise’s best too, the gentle sway of the Zenobia creating unsettling Dutch angles as you explore its rusting, haunted depths, and adding a near-palpable sense of sea-sickness to the tension of what kind of undead monster lurks around the next dark corner.

It’s here where Revelations remains effective, as creepy as the series has ever been. It masterfully leverages your anticipation of lurking terror to create a fear more potent than whatever frights actually arrive.

The shorter chapters and scenes make Jill and Chris’ investigation feel more urgent, too. Being scored for how quickly you complete them, your shot accuracy against enemies, and the number of times you died is another nice touch, adding an arcade feel to the proceedings while almost tricking you into rushing and risking mistakes. 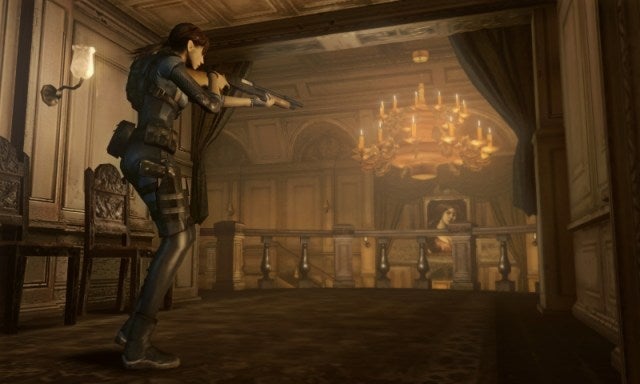 However, being set between the events of Resident Evils 4 and 5 – the year 2005 in the series’ timeline – makes it feel dated in more ways than one. When core entries are set in, or closer to, the present day, it’s hard to feel particularly concerned about events that took place over a decade ago, while the game’s structure isn’t as fresh as it once was.

You see, when Revelations was first released, it was meant to be something of a throwback, offering longtime fans something a bit closer to the games that came before Resi 4 re-defined what the series was until then. That meant less emphasis on fast-paced shooting and cover mechanics, and more strange puzzles in labyrinthine settings. It wasn’t entirely retro though, adding in features like the Genesis bioscanner and incentives to use it to record all the grizzly mutations you crossed paths with. Along with refined movement controls, it succeeded in making classic Resident Evil feel new. Those features have stayed with Revelations as it’s transitioned across formats.

Ultimately though, the difference between Revelations HD on PS3 and Revelations on PS4 is the existence of Resident Evil 7. Much like the fourth instalment re-wrote the rulebook for the series, the seventh – released earlier this year – again totally changed expectations, swapping outlandish biotech conspiracies for isolationist cults and The Hills Have Eyes-style hillbilly horror. Revelations now feels twice removed from what Resident Evil has become.

As for the overhauls the PS4 and Xbox One release brings? As I touched on before, the differences are marginal at best. Visually, the 1080p presentation doesn’t dramatically improve on the previous release, though a noticeably higher and more stable framerate makes the Zenobia’s horrors that much more pleasantly disgusting to encounter. Lighting and effects are improved too, with flashlights cutting through the inky blackness to reveal scuttling monstrosities. Capcom claims textures have been improved too, and I’m sure on a technically measurable level they have, but the environmental detail here left the same unremarkable impression I remember having to the PS3 release.

The co-op Raid mode – where you fight hordes of enemies of varying difficulty with a friend – makes a welcome return, mostly the same but with a remixed “Ghost Ship: Chaos” version. Here, you can use more powerful weapons, but monsters are similarly boosted and enjoy new placements and tactics, making predicting their movements trickier. 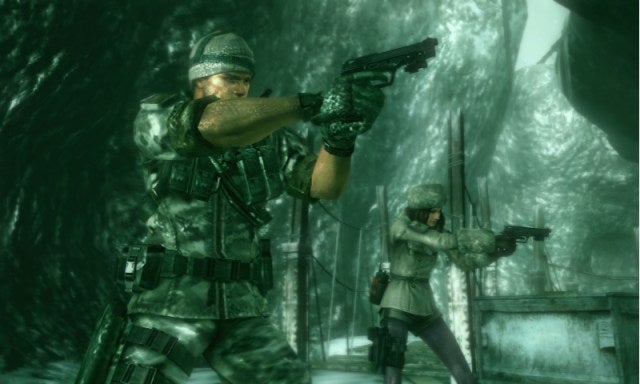 Other tweaks include alternative control schemes, based on layouts from across the franchise – some far more palatable to modern tastes than the retro-style “tank” movement style – and the very welcome ability to unlock all of the existing DLC through in-game accomplishments, without paying a penny.

Yet despite these additions, this still can’t be called the ultimate edition of Revelations. Like Marge Simpson increasingly frantically re-cutting that Chanel suit, Capcom is planning yet another outing for the game, bringing this HD version to Nintendo Switch later this year. Even better, there it will be packaged with a complete edition of Revelations 2. If you’ve got a Switch, that’s the version to hold out for – it’s tough to tell who the PS4/Xbox One version really exists for.

Although Resident Evil: Revelations remains a great game in its own right, it’s hard to recommend this HD (HD-er?) version to even staunch loyalists of Capcom’s fright fest, especially if they picked up the home console release in the last hardware generation. The exception would be those who really loved Raid, as the new Chaos mode might prove reason enough to revisit. Instead, this is probably best suited to those who’ve never played Revelations before, or who came to Resident Evil off the back of Resi 7 and are curious about the series’ history. Even if you fall into that camp, unless you’re a one format gamer, holding out for the Switch release seems wise.