Veterans might be disappointed by a few gameplay changes. The headshot-focused gunplay of RE4 and RE5 has disappeared, and while there is a mechanic to stun your enemies and then dishing out some damage hand to hand, it’s a risky, slightly unrewarding manouvre. The only reason to adopt it is that, on higher difficulty levels, ammo is in fairly short supply. The weapon upgrade system has also been changed, with the creepy merchant of the last games given his marching orders to be replaced by a simple system of swap-in/swap-out custom parts. 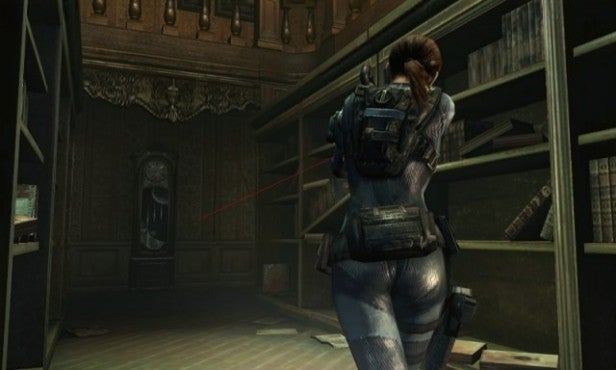 The best new addition is a scanner – the genesis device – that earns you extra points for scanning the scenery, corpses and monsters, and which comes into its own for discovering hidden items and lurking beasties.

The biggest disappointment in Revelations – and the one that comes closest to reminding you that this is still a handheld game – is the AI. Those who hated your CPU-controlled sidekick, Shiva, in RE5 should not be too concerned. While your AI-controlled buddies in Revelations might struggle to navigate shelves or toilet stalls, at least they’re not wasting grenades on solo zombies or hogging all the herbs.

No, here the real issue is the enemy AI. After the ferocious opponents of RE4 and RE5, being attacked by lumbering, jelly-skinned mutants – even lumbering jelly-skinned mutants with spikey appendages – is a bit of a disappointment. These guys just don’t have any window shattering, outflanking tricks to surprise you. In fact, they struggle to make their way around minor obstacles and sometimes even corners, and its only through numbers of sheer toughness that they pose any threat. Yet oddly this isn’t a disaster. The game still has its share of shocks and scares, and the narrow, claustrophobic settings keeps the tension high in spite of their idiocy. 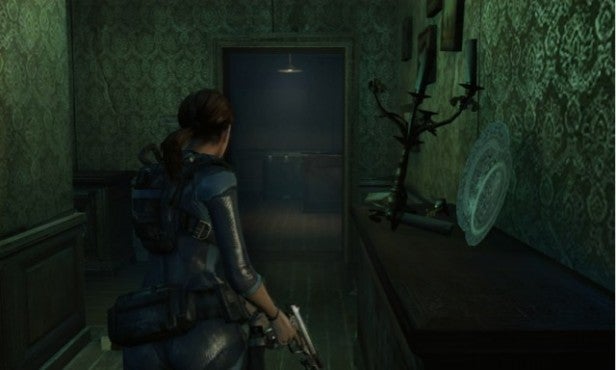 What’s more, Revelations has some fine standout moments. The boss battles are challenging and enjoyable, there’s a fantastic running battle against a giggling mutant witch who sneaks around in the ventilation shafts, some tense moments in a flooded bilge and an early section where you’re left bereft of weapons and dependent on speed and cunning to survive. While Revelations has its flaws, you can’t truthfully say that it’s devoid of imagination.

And it’s the experience that counts here. The 3DS might have struggled for most of its first year, but with Super Mario 3D Land, Mario Kart 7 and now this we’re finally getting games that are as engaging and immersive as anything you can find on a home console. Playing Revelations at night with headphones on we’ve found it every bit as nerve-wracking and atmospheric as a Resident Evil should be, and while it doesn’t scale the stratospheric heights of Resident Evil 2 or Resident Evil 4 it stands up well with the other titles in the series. The campaign is long enough to put some home console titles to shame, and Capcom’s usual attitude to unlockable bonuses, with a system of secondary ‘missions’, gives it a high degree of replay value. 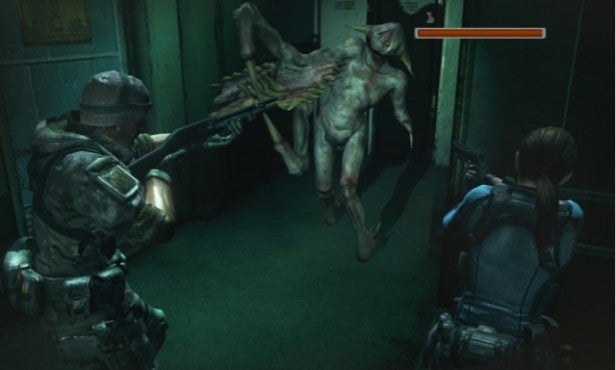 And that’s before we even talk about Raid, a bonus mode unlocked once you’ve cracked the first three chapters. Played solo or co-op through local WiFi and online play, Raid slices up the game’s environments into bite-sized chunks with an entry point, an exit point and a lot of monsters in between. Weapons and perks can be earned and upgraded, and even though there’s a tendency for one player to dominate in the game’s narrow spaces, it’s addictive to play and genuinely great fun.

Verdict
Dubious AI puts Revelations at a disadvantage, but otherwise this looks, feels and plays like a proper Resident Evil, with all the positives and negatives that that implies. Graphically it’s proof of what the 3DS can do when pushed, and while the single-player campaign can feel like a step backwards from the RE4/RE5 years, it’s creepy, action-packed and totally immersive.