Available on PS4 (version tested), Xbox One, PC
The best Resident Evil game is hotly-contested, though often the same few crop up. The Gamecube remake, 2 and 4 often form the backbone of any discussion about Capcom’s best, and I think Resident Evil 7 now belongs in that conversation.

The long-overdue return to survival horror is just what the series needed and, though the move to first person may seem a drastic change, Resident Evil 7 still plays like a Resident Evil game. A great one at that.

Whereas the tank controls of old used to induce fear through a sense of powerlessness, playing from the perspective of Ethan as he battles the Bakers to save his girlfriend, Mia, carries that same fear but in a different way. While more liberated in my movement thanks to much sharper controls, I’m now more fearful of what lies around the next corner, as the first-person perspective makes the scares feel all the more personal.

This is done by some of the greatest sound design of any game I’ve ever played. Seemingly innocuous noises suddenly become utterly terrifying the deeper into the game you get. Capcom is very intelligent in how it scares the player. It doesn’t simply go for the cheap thrills in a way that games like Until Dawn: Rush of Blood do, instead it allows the player to get comfortable through repetition. Moving through the same corridors, solving puzzles (much like the Spencer mansion, the Baker household is designed in such a way where you’ll explore every room multiple times) and every time I THINK a scare will come, it doesn’t.

The times when I’m sliding through a narrow passageway, the music rises and rises as if Jaws is approaching so that I begin to expect Jack to grab me by the throat as I reach its end, or open a door to a new room expecting to be thrown through its walls by him, it doesn’t happen. Now, I don’t know what to expect, so rather than build myself up to the scare, I’m left in constant dreaded expectation, meaning any sudden sound has me on edge. 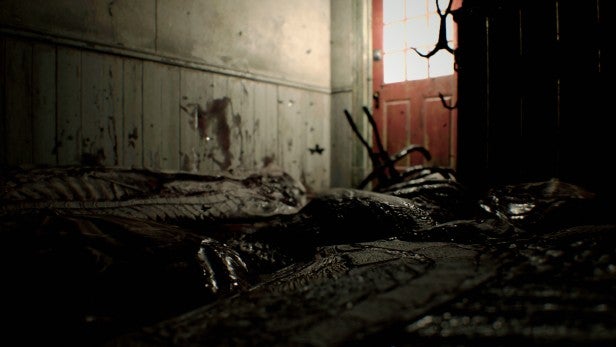 While moving around a corridor, the simple noise of a bottle hitting the floor, a door closing upstairs or rusty pipes means I’m constantly spinning Ethan 360-degrees to the point where he must start feeling ill. Capcom has done a fiendish job in driving me mad with the torture of a scare that never comes, that is of course until it comes and somehow manages to still be terrifying.

The first half of Resi 7 feels like I’m playing a teen slasher horror movie in the best way possible. It’s me versus whichever member of the Baker family is particularly pissed off, it’s incredibly thrilling. Hiding behind sofas and boxes as Jack stomps around yelling obscenities searching for Ethan is truly intense. Then, as I progress through each room, there comes some of the greatest and most creative boss fights in the series to date. I won’t spoil them here, but just know you’re in for a treat.

One new combat mechanic is Ethan’s ability to block. Blocking significantly reduces the damage taken from strikes, and you’ll quickly learn how vital this mechanic is during combat, and for a player like myself I suffered some initial growing pains combining blocking and running. With previous Resident Evil games the strategy was always to turn and run to relative safety before turning to shoot the enemy. Now, turning your back presents serious vulnerability, so it is now more strategic to absorb a blow while blocking before fleeing. With resources being so scant I often found myself dying because I failed to remember how useful blocking is, with my flight instinct kicking in far too soon.

There will be many nods to fans throughout the game: from the use of simple herbs to even the sound of pressing buttons on a keypad being taken directly from the original games. It’s clear that every facet of this game has been built by developers with a true affection and understanding for this franchise’s history.

The gameplay and sound are complemented by stunning visuals, too. Resi 7 includes PS4 Pro support with full 4K and HDR, and is one of the best games to take advantage of the tech. The step up in visual fidelity is immediately noticeable on what is an already gorgeous game. Candles flicker with brightness that can hurt your eyes to look at for too long but the flame can be surrounded by pitch darkness, a burst of the flamethrower in a dark room will light it up with blinding light. It finally made me feel justified in spending an outrageous amount on a new TV in last year’s Black Friday sales.

The superb sound and looks would only be window dressing if Resi 7 wasn’t compelling to play, and thankfully it is thanks to incredible voice acting coupled with a compelling story. As the story unfolds and this new form of infection causes its subjects to deteriorate further it leads me to want to discover more. The T-Virus has been around for decades to the point where veterans can detail its lineage, but this new virus is different, giving us plenty of questions to find answers for. Resident Evil has always done a great job of telling the story beyond cutscenes and that continues in 7 with newspaper clippings, diary entries and other things littered in the map further embellishing the Baker’s already compelling story. 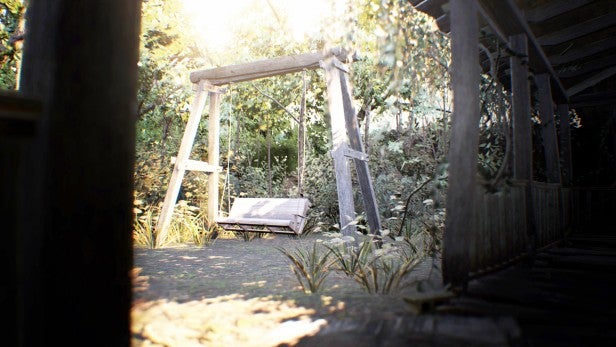 However, there comes a time at the midway point where the landscape of the game completely changes, all hindered on a critical narrative plot point. Unfortunately the moment that it is built on significantly lacks the narrative punch Capcom thinks it has, meaning rather than be left with my jaw dropped I was instead left with my eyebrows raised in confusion.

Then, of course, there’s the support of PlayStation VR. Capcom has tried to make the VR experience accommodating to all players with multiple settings, including a “smooth” option where movements on the right analogue stick are one-to-one and allow Ethan to move as he does in the regular game mode. Unfortunately I found the experience quite nauseating, the juxtaposition of Ethan’s head moving while my head stayed still was something my brain couldn’t deal with, so I switched to the more rigid option, where flicks of the stick left or right sees Ethan turn at sharper angles.

There are multiple problems with VR which make it a far lesser experience than in the TV version. For starters the graphics quality takes a major dip, as you might expect, even when running on the Pro, and considering how amazing the game looks on the TV, the step down can feel a little too steep. Secondly, because of the slightly fiddly movement mechanics, it can lack the dexterity required in the game’s more challenging sequences, making the experience far more frustrating than it need be.

Also – and I’m not afraid to admit this – Resident Evil 7 is far too terrifying to play in VR, especially on a first play through. The nerves I felt while playing even on the TV meant I couldn’t imagine playing it in virtual reality without having at least some awareness of what lies ahead. If you’re a true thrillseeker, masochist or genuinely mental, then go for it, but I certainly didn’t have the heart or stomach for it. I feel like VR should be treated as a means of enjoying the Resident Evil 7 highlight reel rather than using it during intense gameplay moments which require precision.

After spending years yearning for Resident Evil to return to survival horror, Capcom has done so in absolute style. The switch to first person works wonders for the series and we have a game that feels completely fresh while at the same time has so many moments that will lead series fans to reminisce.

Its constant changes of pace, intense action and genuine terror make Resident Evil the most enjoyable horror game I’ve ever played. Is it the best Resident Evil game? No, not quite, but it’s very close.