Introduction
Capcom always knew it had a lot to prove, and with Resident Evil 6 it’s thrown just about everything at putting the longstanding horror series back on top.

It’s a bit unkind to label Resident Evil 5 a dud – for all the flabby plotting and Sheva’s rotten AI it still had sections of brilliance – but you won’t find many people who would put it up there with the likes of Resident Evil 4, and there’s a real sense that EA’s Dead Space duo has defined the horror game for this generation (even if it borrowed a lot from Resident Evil 4). At times, the new Resident Evil offering feels like an apology, and at times it feels like a statement of intent: sure, other developers can make survival horror games, but can they make them as big and as bonkers as us? 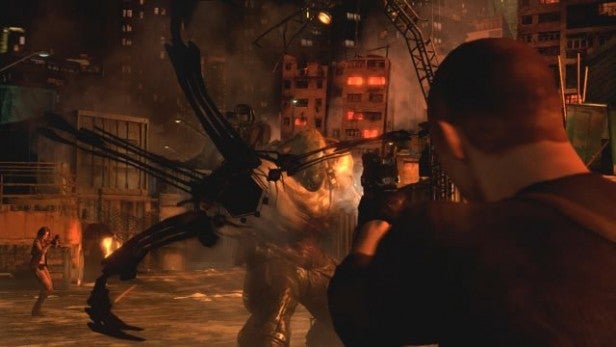 Resident Evil 6 Storyline
Size and scale are the watchwords. Resident Evil 6 incorporates not one but three lengthy campaigns, each fully-playable in single-player or co-op modes, and all three binding together in one massive over-arching storyline. On the one hand, Resident Evil 6 acts like a straight sequel to Resident Evil 5 and Resident Evil: Revelations, tracking Chris Redfield and his squad as they’re sent into action against hyper-charged terrorist mutants – the J’Avo – in a fictional Chinese city.

On the other hand, it’s also a sequel to Resident Evil 4, continuing the adventures of Leon Kennedy as he tackles zombies and other bio-monstrosities in, around and under an American university town. Finally, in the fictional Eastern European state of Edonia, a mercenary – Jake Muller – teams up with Resident Evil 2’s Sherry Birkin as the BSAA (the good guys) battle more J’Avo in a remote mountain city. It turns out that Jake is the son of notorious Resi villain Albert Wesker, and that his blood might just hold the key to stopping the latest virus before it destroys the world.

Three different campaigns, then, and three surprisingly different experiences. Chris’s adventure harks back to the urban chaos of Resident Evil 2, but it’s also the closest the series has ever come to being a straight third-person action game. Though there’s limited use of cover and the J’Avo have a nasty habit of suddenly sprouting giant clawed arms or bat wings, it can feel a bit like Gears of War 3 or Army of Two – or even Capcom’s own Lost Planet 2. Jake’s tale is also pretty action heavy, though altered by Jake’s brutal melee skills, awesome acrobatics and impressive resistance to machine-gun fire. Though the platforming bits are basic and only semi-interactive, you still can’t help but suspect that someone at Capcom has been playing the Uncharted series.

It’s Leon’s chapters that feel closest to the Resident Evil of old, and if you liked Resident Evil 4 – and most of us did – then you’ll find Leon’s campaign a little slow to start, but great once it gets going. It’s still a bit linear, and still very action heavy, but there’s a bit more exploration and a little more puzzle solving, and with zombies everywhere you look there’s a bit of the classic Resi feel. 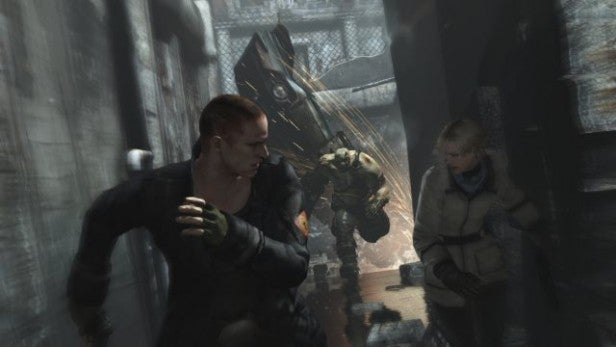 Resident Evil 6 Controls
There’s an awful lot to like here. Capcom has finally modified the controls so that you can aim and shoot at the same time, which makes dealing with fast-moving enemies a whole lot less frustrating. There’s now plenty of room in the inventory, and you spend less time working out what to keep and what has to be thrown out. And while Resident Evil 6 still employs AI-controlled partners when you’re playing alone, Helena in Leon’s campaign, Sherry in Jake’s campaign and hotshot sniper Piers in Chris’s campaign are all pretty useful with a gun. We’ve played Resident Evil 6 alone, with a friend and with drop-in, drop-out online players, and while it’s still better with a friend or even with a stranger, it’s perfectly enjoyable on your tod. You’re no longer left swearing while Sheva wastes grenades on the grunts, fires a pistol at the bosses and hoovers up the herbs before you grab them.

However, the problem here is consistency. Of the three campaigns, Leon’s is the best, Jake’s improves with time, while Chris’s is decidedly patchy. We saw Capcom struggle with the third-person shooter in Lost Planet 2, and the work here shows the same lack of experience, and the same problem delivering convincing and exciting encounters.

Resident Evil 6 Gameplay
Annoyingly, someone seems to think it’s
really thrilling to keep you in an enclosed area with respawning
monsters and minimal ammo, ask you to survive for a specific period,
then have you join up with your partner to activate whatever will take
you to the next scene. With experience, you learn to recognise these
sequences, give an inward groan and just accept that you might be stuck
here for the next half an hour until you’re lucky enough to both get to
the activation point and press the button before being overwhelmed. 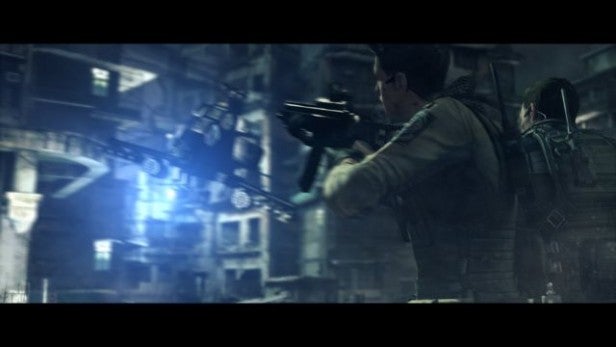 Similarly,
a couple of sequences have you retracing the same chunk of map with
respawning J’Avo or zombies, which soon gets old, particularly when the
checkpointing is poor, which it can be. Finally, in some cases the
limited quantities of available ammo – presumably kept limited to up the
tension – simply means that you spend huge amounts of time meleeing
your way through the local zombie/mutant population. This isn’t just
dull; it also looks really silly.

Yet the bad stuff is always balanced by some goodness. It’s not that the plot holds your attention or even makes sense (even Resident Evil 4 couldn’t manage that), but there’s something about the way all the byzantine threads come together that keeps you coming back for the long haul. We miss the old merchants with their cool gun upgrades, but the new system of skill points and perks works well, and you can carry on equipped perks from one campaign into another. 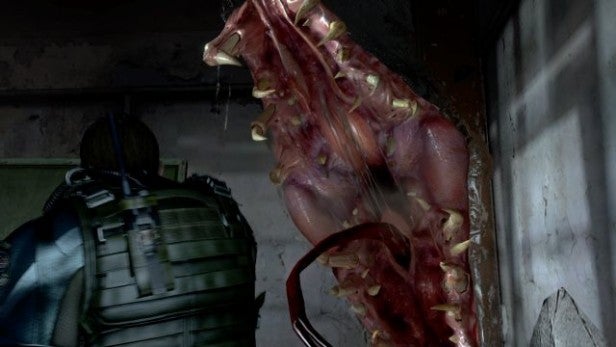 Resident Evil 6 Multiplayer
We also love the way that campaigns intersect within Resident Evil 6, with the game intelligently bringing in another one or two players from the masses playing online, so that your adventure temporarily connects with someone else’s. Taking down a gigantic horror with three other players is one of this year’s big gaming thrills, even if the process of taking them down feels over-extended. Meanwhile, a sneaky Agent Hunt mode – unlocked once you’ve completed one campaign – allows you to sneak into another player’s game as a monster and do your worst to take them down. If you’re on the receiving end, this adds a little frisson of excitement, though you can disallow Agent Hunt if you’d rather just get on with your game. This is really inspired stuff, showing that Capcom is still trying to push the envelope in online gaming, even if nobody appreciated it in Resident Evil 5 and Lost Planet 2. 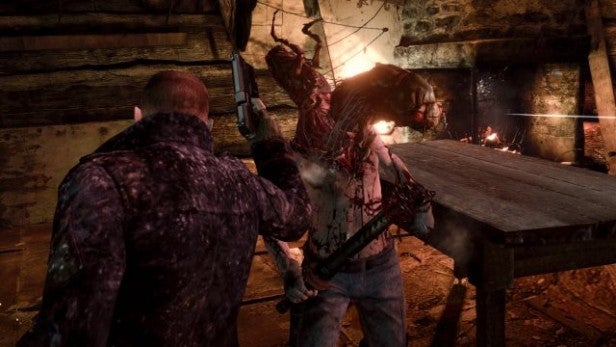 Resident Evil 6 Graphics
What’s more, the graphics and design are consistently impressive. We’ve always said that Capcom is the world leader in monster design, and Resident Evil 6 has the developer on top form, with all kinds of pulsating, tentacle-forming, bio-mechanical, eyeball-sprouting abominations. Some, particularly those that stem from partially clothed women, are a bit unsettling for all the wrong reasons, but most of the time the beasties are a joy to watch and a joy to destroy. The environments, meanwhile, are amongst the creepiest, most detailed and most atmospheric we’ve seen in a Resident Evil game, whether we’re talking a water-filled underground labyrinth, a mountain pass in the middle of a snowstorm, or neon-lit streets in the middle of the carnage. 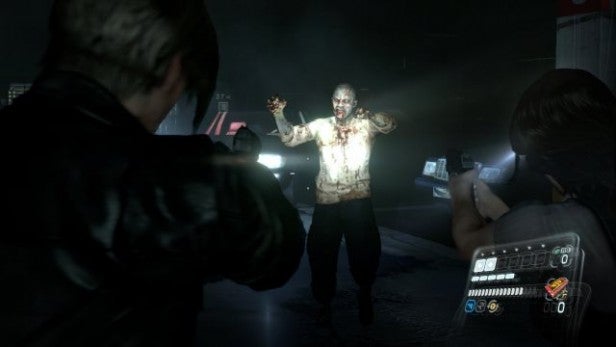 Resident Evil 6 is a huge game with a huge array of features, but one that does feel bloated. Inevitably, every player will be drawn to one campaign more than the others, and we’re still not sure what Capcom is playing at with Chris’s action-oriented chapters. Those who hate quicktime events will find a lot to hate throughout, there’s still plenty of poorly written dialogue, and some of the encounters just don’t work. At times more effort seems to have gone into the blockbuster cinematics than the minutiae of the level design and, frankly, we could do without turret sequences in a Resi. In the end, it’s a game where size and scale are a double-edged sword, giving fans an epic feast but ensuring that the finished game lacks focus. One third of it is the best Resident Evil since Resident Evil 4, but wouldn’t it be better if all the game hit that level, not just part?

Resident Evil 6 Verdict
In doing its best to be all things to all fans, Resident Evil 6 has lost some of its coherence. For all the ingenuity of the criss-crossing plotlines and the clever online cross-play, there’s no getting away from the fact that at least two of the three campaigns are patchy, and even the best doesn’t often hit the heights of Resident Evil 4. Improved controls, stronger AI, impressive visuals and some genuinely brilliant moments make this a stronger Resi than the last one, but for all its size and bombast Resident Evil 6 isn’t quite going to put the series back on track.