Rightly or wrongly, Nintendo has picked up a reputation for being the “kiddies’ choice” when it comes to console gaming. This opinion developed mainly from the cutesy characters associated with Nintendo in big games such as Super Mario and Zelda. That’s not to say that these games aren’t good, because they are, very good to be precise; but a lot of prospective gamers have been put off by the younger look and feel of these games. However, the cutesy Nintendo image is about to take a battering, because Capcom has released Resident Evil 4 and made it a GameCube exclusive – at least until the end of the year when a PlayStation 2 version is rumoured. 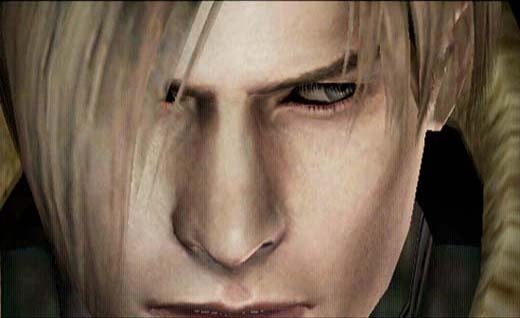 Now I dare say that many of you won’t be that excited about a new Resident Evil game, since the franchise had started to get a bit stale. Even though Resident Evil: Code Veronica on the Dreamcast was a great game, it didn’t feel like much of a step forward from the previous PlayStation 1 titles. I’m therefore happy to report that Resident Evil 4 isn’t so much a step forward, but more of a giant leap!


As with all the previous games, Resident Evil 4 has a strong storyline that carries the action along. But coming as a big surprise, is that there are no Zombies and even more amazingly, the evil Umbrella Corporation has nothing to do with the proceedings – well the latter isn’t entirely true, but you’ll have to play pretty far into the game to find out what I mean. 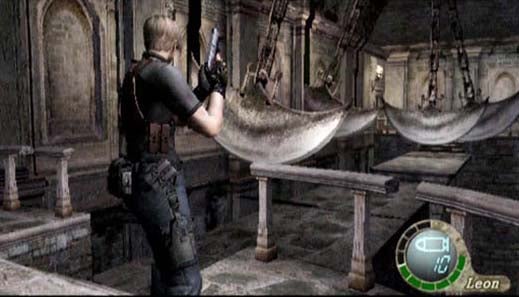 What will be instantly recognisable to Resident Evil fans, is the character that you control. Leon Kennedy, the rookie cop from Resident Evil 2, makes a return although he’s no longer working for the police. Leon has been through a few changes and is now a government agent on a mission to rescue the President’s daughter (Ashley). Following sightings of Ashely in a remote European village, Leon heads out (alone of course) to find and recover her. 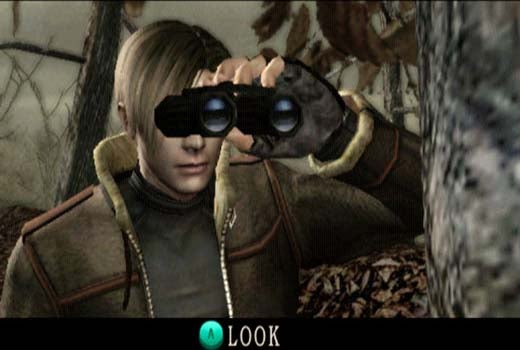 So, the storyline has taken quite a twist, but ultimately it’s the gameplay that will make or break any major title. If you’ve been playing Resident Evil games for a while, there are probably a few things about the gameplay that you hate – those stupid inventory boxes for one, and the fact that aiming weapons was always a pretty random affair being another. Well, if you made a list of all the things that annoyed you about previous Resident Evil engines, you’d probably find that Capcom has addressed them all. 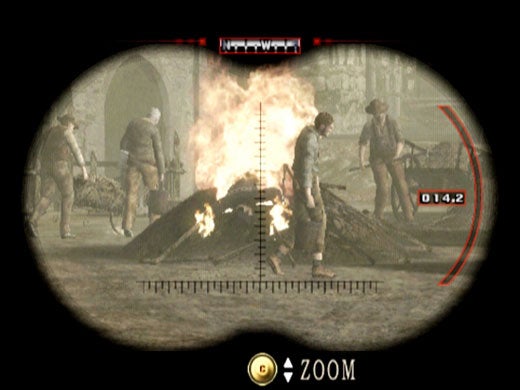 Controlling Leon’s movement with the left analogue stick is simplicity in itself, while the right analogue stick allows you to look around. You still have to press the B button to sprint, but this doesn’t feel as antiquated as it did on previous games for some reason. The A button deals with most actions and acts as an attack button when you have a weapon drawn. The right trigger will draw your equipped weapon, while the left trigger will draw your knife, regardless of which gun is equipped. 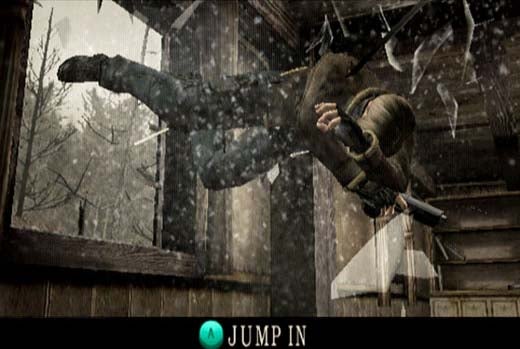 Combat is far slicker than on any previous RE game. When you press and hold the right trigger, Leon will draw his gun; all the short range weapons have laser sights, so you do have to aim well for maximum damage – go for the head shot and you could take that villager out with one or two shots, go for the torso and it could take four or five. Longer range weapons have telescopic sights, which can be zoomed in and out using the right analogue stick. There’s also a bit of unarmed combat thrown in for good measure – if you manage to stun an enemy with a few well placed rounds (or a flash grenade) you can then walk up to them and kick them in the head. The kicks don’t do a huge amount of damage, but they’re very satisfying. 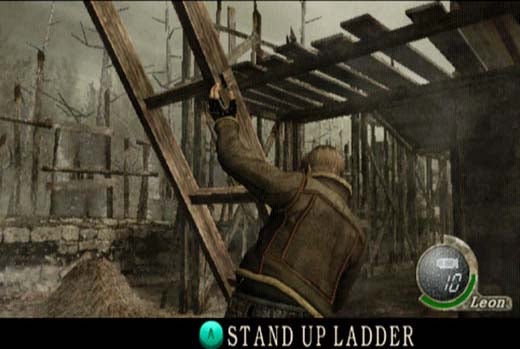 Talking of weapons, although you will pick up the odd bit of hardware conveniently lying around, if you want some state of the art weaponry, you’re going to have to pay for it. Scattered throughout the landscape are arms dealers that will sell you weapons, or even upgrade the guns that you have. These merchants will also buy any treasure that you may have acquired during your wanderings, giving you even more cash to spend on destructive products. Unfortunately, you can only buy weapons from the merchants and not the ammunition to go inside them – ammo has to be collected along the way. Ammo can be just lying around or hidden in cupboards, though more often than not enemies will be kind enough to drop some when they die. 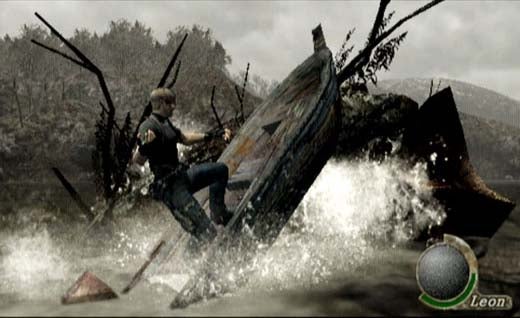 The merchant doesn’t only sell weapons though, you can buy treasure maps that show you the location of all the treasure in your current area – ideal for building up a significant bank roll. But one of the best new inclusions is the ability to buy attaché cases from the merchant. Put simply, the larger your attaché case, the more items you can carry with you. You may think that you have plenty of inventory space at the start of the game, but once you start collecting weapons like shotguns, rifles, SMGs and magnums, that space soon fills up. Not to mention the fact that you need to carry ammo for each and every gun as well. 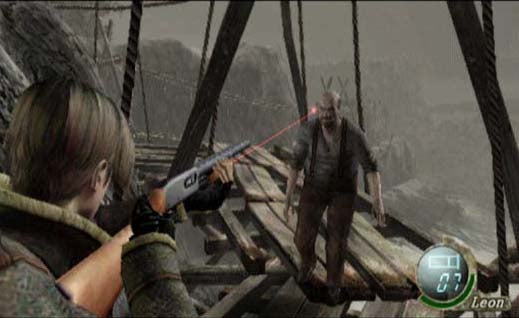 In previous RE games you only had a set amount of inventory space, and you had to dump other items in lockers scattered around the game. I imagine that the idea behind this was to add in a strategy angle where you had to carefully balance what you carried with you and what you left in the locker. Unfortunately, what the locker method actually added to the game was annoyance and frustration, so I for one am very glad to see the back of it.


Although there are no zombies in RE4, there are a lot of villagers who appear to be possessed – they look remarkably like zombies, but with greater swiftness and agility. You eventually find out that the villagers are being controlled by some kind of parasitic life form, and it’s clear from the visuals that the developers have spent plenty of time watching John Carpenter’s The Thing. 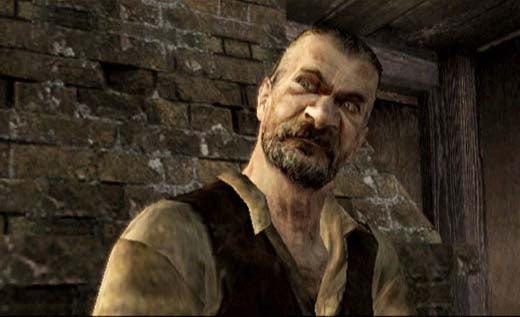 Graphically, Resident Evil 4 breaks new ground on the GameCube, and it’s probably one of the best looking console games I’ve ever played. The attention to detail on the character models is amazing, while the landscapes, buildings and internal environments are all beautifully rendered. Sound is also very well taken care of, with a Dolby Pro Logic II soundtrack adding more atmosphere to an already immersive game.


Another truly infuriating feature of the older RE games was the need to find ink ribbons for the typewriters in order to save your progress. So, not only did you have to find a save point, but you had to have a spare ink ribbon once you’d found one. Thankfully this has also been addressed in RE4, and although the typewriters remain, the ink ribbons have thankfully gone the way of, well, ink ribbons I guess. 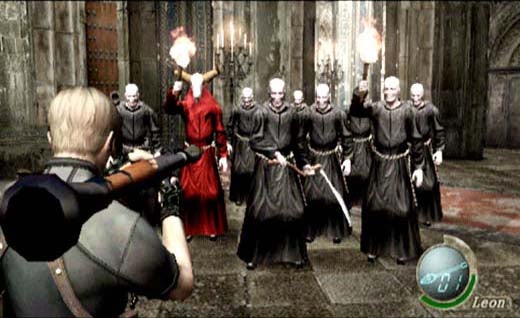 Resident Evil 4 is a very big game and just like Code Veronica, it ships on two discs. To make the transition from disc one to disc two took about twice the time it took me to complete Halo 2. But just like Halo 2, you want to keep playing RE4, just to see how the story pans out, or which familiar face is going to pop up next.


Once you find Ashely, you have to keep her safe as well as yourself – if Ashley gets killed or taken, then it’s game over. You can use your first aid sprays and healing herbs on Ashley to keep her healthy though, but every one you use is one less for yourself. Ashley does come in handy at times though, since there are certain puzzles and tasks that require both of you, and when you venture deep enough into the game you’ll even find yourself controlling Ashley instead of Leon. 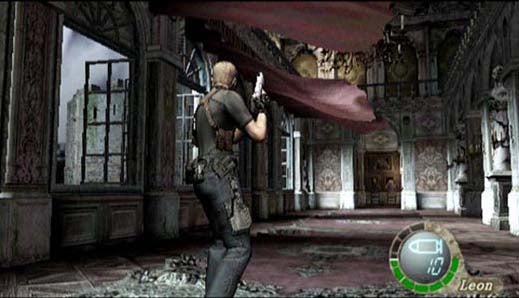 The gameplay has definitely been streamlined for RE4, and you don’t find yourself running backwards and forwards over the same ground for hours like you did in previous games. The puzzles are set at just the right level to be interesting, but not frustrating. There’s even some “reaction time” moments thrown in, where you have to hit a specific button combination within a second or so – the best example of this is the knife fight, where you have to react quickly or end up as sushi. 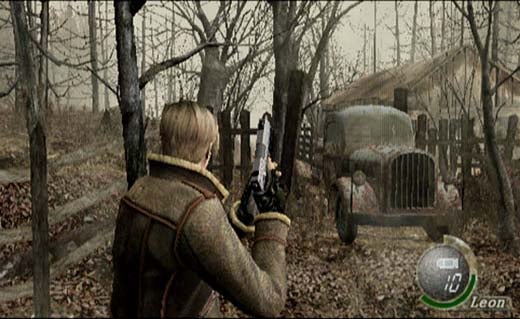 Unfortunately, although the puzzles aren’t annoying or frustrating, the excessive amount of boss characters is. I know there was a time when end of level bosses were needed to add longevity to games, but those days are gone. I’m not even one of those gamers who complains about bosses too much, and having the odd boss character to get past can be quite rewarding. But RE4 seems to have one boss fight after another, and another and another. Some of the bosses are truly amazing to behold, but you’re still going to be stuck there while you try figure out where the weak spot is, and then how to exploit it without dying. In fact, if it wasn’t for the exorbitant number of bosses in RE4, it would probably have been the first game to have walked away with a 10/10 score and an Editor’s Choice award. But a game as good as this one didn’t need to throw in this many boss fights in order to squeeze out an extra hour of gameplay. 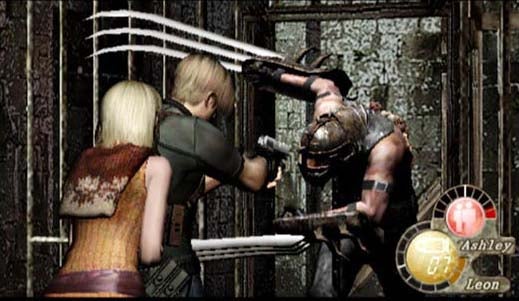 But even the excessive use of bosses can’t dampen my enthusiasm for Resident Evil 4, I’d even go as far as saying that it’s one of the best games I’ve ever played – and that’s saying something when Half-Life 2 and Halo 2 were released only a few months ago. If you liked the previous RE games you’re going to love Resident Evil 4, and even if you hated the other games you should still give RE4 a try, as it’s so much better than its predecessors.