Here’s a quick checklist of items you’ll need to enjoy Army of Two: a copy of the game, a PS3 or Xbox 360 console, a good screen, a decent sound system, an Internet connection, Xbox Live or PSN membership and a friend.


The last one is important. As you might be able to tell from the title, Army of Two was designed from the beginning as a co-op shooter. You can see it in every aspect of the game, from the control system to the game mechanics to the way the missions are designed. There’s not a moment in the game where the two playable characters, Rios and Salem, aren’t working together. Play it as you would a normal 3D shooter and you’ll die. Recognise that it’s all about teamwork, and you won’t just survive – you’ll prosper. 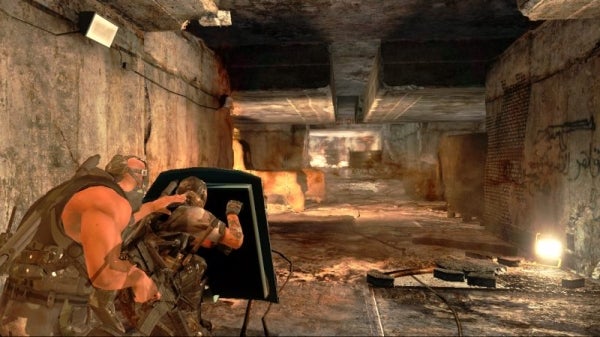 That’s because Army of Two takes place in the murky world of Private Military Contractors, or mercenary corps. By the end of the first mission Rios and Salem have decided to throw in life in the US Army for a more lucrative career working for one of these companies, and it’s from here that the game throws you first into Afghanistan, and then into Iraq. Handed objectives by the company, it’s up to you to take out terrorist leaders, destroy enemy weapons and generally riddle anything that moves with bullets.


Perhaps I should add here that Army of Two isn’t for those with a hatred of violence or a liberal conscience. While it has a coating of dark, almost goofball humour, it’s a game whose references to 9/11 and the invasions of Iraq and Afghanistan may get too close to the bone for some. The violence, meanwhile, is unrelenting and at times pretty gruesome. If Saving Private Ryan and Black Hawk Down are the touchstones for many of today’s military shooters, this one feels like a cross between Rambo, Commando, Team America: World Police and Friday 13th – maybe it’s the hockey masks that does it. 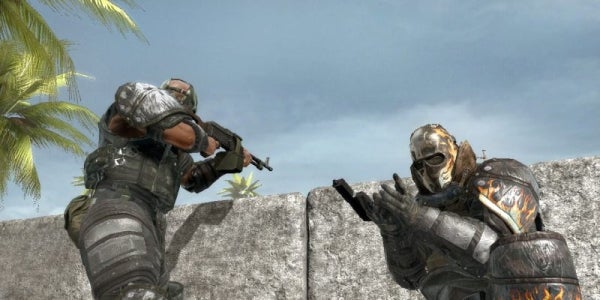 Moral objections to the side, the game puts co-op play at the heart of everything it does. The central mechanic is what EA calls the aggro system. It’s an idea pinched from MMOs, where the warrior characters attract all the hostile attention so that the weaker magic users and archers can blast the enemy from a safe distance.


Here, shooting at the enemy or moving offensively towards them attracts their attention, and the game’s aggro meter sways your way. The more aggro you get, the more your partner is free to do his thing without hostile interference. Say there’s a gang of hostiles behind a bunker. If you sit behind cover but lay down a carpet of suppressive fire with your primary weapon, they’ll focus all their attention on you, giving your partner the chance to outflank them and shoot them from behind.

Take too much aggro, however, and you could end up under fire so heavy that your chances of survival grow slim. Aggro is also affected by your position and the size of your gun, making this one game where switching to a small, quieter side-arm to do the actual killing often makes a lot of sense. Sniping, for instance, can be useful, but the sight of a sniper rifle is practically an aggro magnet to those nasty terrorist types on the field.


The key to Army of Two, then, isn’t just shooting straight but managing your aggro so that both you and your comrade can function effectively. Not only are your enemies too numerous and too tough to tackle with a more head-on approach, but certain troops come heavily armoured or will lurk in shielded machine gun emplacements, making it imperative that one or the other of you gets behind them. 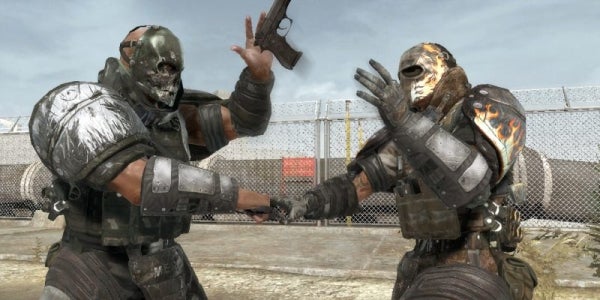 On top of this, a number of secondary game mechanics need teamwork. There are sniper targets out there that need simultaneous shooting, plus areas where one partner gives the other a leg-up, then in return gets pulled up into position. At times, one of you can pick up a shield to give mobile cover to a partner who does all the shooting. There are also back-to-back sequences where you guard each other’s rears while enemies attack in slow-motion – it’s a shame these only occur at preset moments.


Even the health system asks you to work together. The game uses a Call of Duty style fade-out when you’re low on life, and if you fail to crawl to cover and rest you’ll find yourself collapsing on the floor. At this point your partner needs to race into the fray and drag you to safety before administering a little much-needed medical assistance. 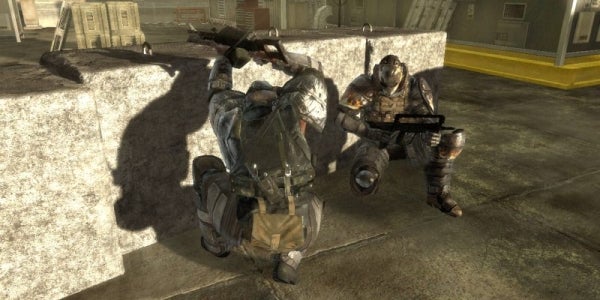 Obviously this all makes sense in an online co-op context, but what about those of us who want to play alone? Luckily, EA has clearly invested a lot of time and effort into its PAI or Partner AI system. With you playing one merc, the CPU takes the other and tries to support you in whatever you’re doing, using the environment and any tools at its disposal as effectively as it can.


It actually does a fairly good job, and you can help it do a better one not by issuing orders, as in squad-based games, but by instructing it to adopt hostile (aggro raising) or passive (aggro losing) holding or advancing behaviours. Sure, there are times when the AI goes skew-whiff – dragging you to the worst possible cover position under heavy enemy fire when you’re hurt, or failing to make use of all the aggro you’re busy building – but a lot of the time he does his job sensibly and with just the right amount of management.

The only problem is that, while Army of Two functions as a single-player game, it’s not actually all that enjoyable as one. After the novelty of the first couple of levels has worn off you feel like you’re just travelling from one cave, camp or concrete bunker to the next, fighting off more of the same identikit middle-eastern terrorists using basically the same technique. Instead of Halo’s infamous thirty seconds of fun, over and over again, we get thirty seconds of time passing in a vaguely interesting fashion, repeated ad nauseum.


Tactics never seem to develop and there’s just not enough variety to the environments or the challenges posed. The game picks up with an assault on a terrorist occupied aircraft carrier, but it’s not long before even this gets bogged down in more of the same-old, same-old. As a single-player experience, I would comfortably put Call of Duty 4, Gears of War, GRAW2 and even Frontlines: Fuel of War way ahead of Army of Two. It’s full of interesting ideas – I’d love to see the weapons store and upgrade options turn up in other 3D shooters – but it’s ironically not all that exciting. 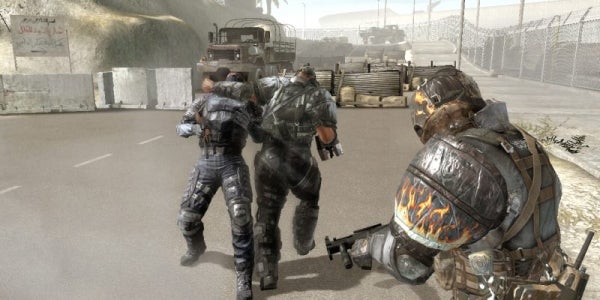 With a friend, however, it’s a different story. Even played with a stranger over Xbox Live, Army of Two takes on a new dimension because the simple fact that you’re playing with another human being adds a range of new dynamics to the game. You have to fight well and look after your partner, partly out of embarrassment at what happens when you don’t, and partly because you need them to do the same for you. Even in the space of a single mission a sort of trust develops, and you learn to work together as a team, taking turns to cover, suppress and outflank so that neither of you is left out in the fire for two long.


You learn to take calculated risks, not stupid ones, because collapsing in the open under heavy fire will only get both of you killed. In a game where checkpoints can be quite spaced out, this is never the most appealing option. If your partner has a headset you’ll soon get an idea of how pleased or pissed off they are, and even if they don’t a system of single-button applauds and rebukes will give you an idea.

Technically speaking, Army of Two is solid and sometimes outstanding. You may get a little tired of the over-egged HDR effects, but the Unreal Engine 3 graphics pack in plenty of detail, particularly in close-up shots of your brutishly armoured duo. Audio is on the gritty and understated side – though that’s no bad thing in a game soundtracked by the constant rattle of machine-gun fire.


The game also feels robust on the networking side. Occasionally the action will pause a little while the game waits for your partner’s console to catch up, but generally speaking we’re talking about a smooth, lag-free experience. The only shame is that you can’t kick in a single player game and have partners drop in and drop out at will. Instead, you have to select an online co-op game at the opening (starting at any of the missions you’ve unlocked) and go from there. 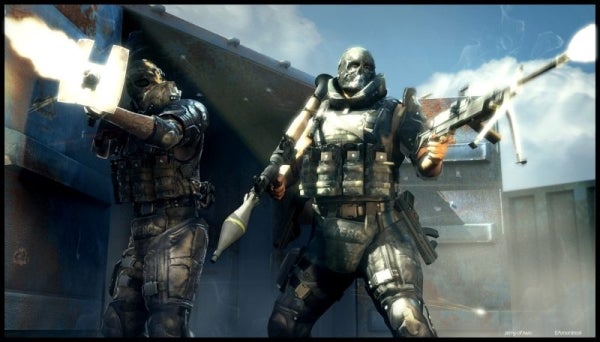 I won’t go overboard dissecting Army of Two any further. It’s a strong co-op focused title and if you’ve enjoyed similar options in Gears of War or Halo 3 then you’ll certainly get a kick out of this. If you’re in it for single-player, however, then there are better ways to spend your money and your time.


My only real worry is that it’s not a huge game, and while the game also packs in an interesting competitive online mode, still based on the same two-man, co-op concepts, it won’t give you as much long-term value as Gears of War, Halo 3, Call of Duty 4 or Frontlines: Fuel of War. All the same, it’s a good jumping off point for future co-op ventures, and if that means another Army of Two with a little more spice to the levels, then I for one wouldn’t be too disappointed.


An innovative and well-designed co-op shooter that, despite a decent AI, only takes off when played with another human – preferably a real-life buddy.