It was hard to imagine how Epic might have topped Gears of War 2. If Gears of War was the action game that set the benchmark for HD era action games, Gears of War 2 was the game that realised how bold and cinematic this style of game could be. Say what you like about the heavily-scripted gameplay or the muscle-headed melodrama, there was just no arguing with the magnificent of its big set-pieces. Well, top it Epic has. While Gears of War 3 is not consistently as awe-inspiring as Epic clearly thinks it is, most of the time it comes awfully close. So close, that it’s amongst the most incredible action games we’ve ever seen. 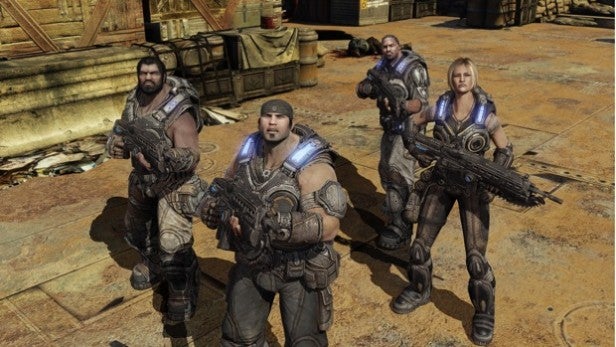 This is to the Gears of War trilogy what Return of the King was to Peter Jackson’s Lord of the Rings. It’s a dazzling spectacle punctuated by a series of extraordinary sequences, and while not everything works perfectly, it’s hard not to come away feeling exhilarated. If everything in Gears 2 was bigger and, in Epic’s terminology, more badass, then Gears 3 takes this approach to it’s limits, at least on current console technology. The game’s biggest set-piece battles are larger, louder and even more bombastic than before. The turret sequences – you didn’t really think you’d see a Gears of War without them? – are so breathless and massively-staged that any rival shooters in production that plan to put them in might as well just give up now. Much as we love Killzone 2 and the mighty Resistance 3, Gears of War 3 sets a new benchmark for large-scale set-pieces in a sci-fi action game. 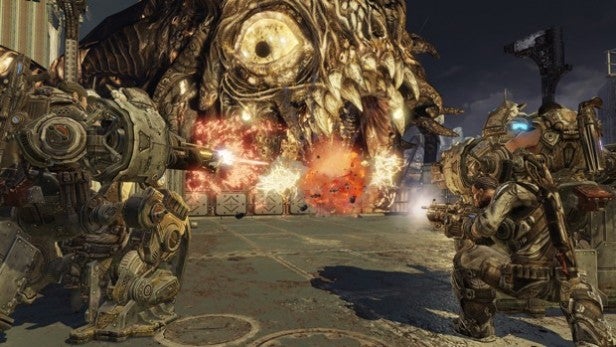 The graphics certainly help. Gears 3 pushes the Unreal 3 engine further than anyone has ever done before. Even if you have your doubts about the game’s obsession with muscle-bound figures and chunky military gear, you can’t help but be impressed by the level of detail in its characters, its monsters and its rubble-strewn scenery, or the sheer loveliness of its lighting. Gears has cinematography that would make any real-world director of photography feel proud. Meanwhile, there’s even more colour and variety in its world, with a range of landscapes and architecture that makes it no less starkly beautiful than the original Gears, but a little more engaging over the long
haul. 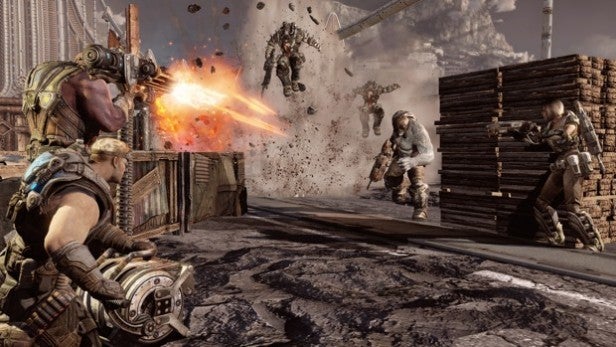 You can also see the close links between the engine technology, the art and the level design in the efficiency with which it all works together. There’s little – if any – texture pop-in, and even with dozens of allies and enemies on-screen and multiple explosions rocking the view, the frame rate never seems to slow. It’s hard to say whether Gears 3 is the best-looking console game in existence, but if not it’s right up there with Uncharted 2, Killzone 3 and Crysis 2 and trying to punch its way into the prime position.

Admittedly, you might have to bear with Gears 3 in the early stages. The opening, with Marcus, Dom and their comrades battling the fiendish Locusts aboard a floating refuge, is a little too close to Gears-by-numbers, as you hold off waves of attackers using the by now tried and tested cover mechanics. The same holds true of the second section, as Cole and his team work their way through yet another ruined city, this time tackling the just as fiendish Lambent as the stalks thrust upwards from the ground and dispense warriors and exploding bloaters into the fray. In fact, there’s a worrying sense, early on, that Gears has become a bit of a one-trick pony, and that the relentless pacing is designed to overwhelm and stop you noticing the repetition. 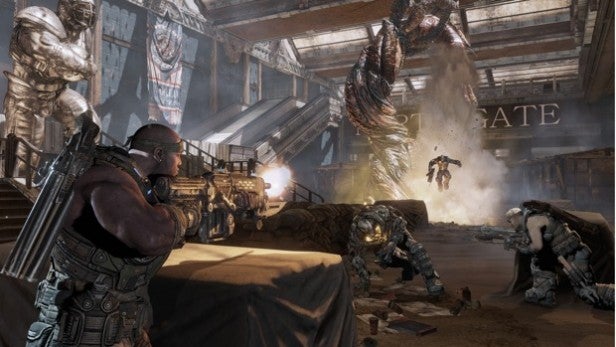 However, the deeper you get into the game, the more this feeling disappears. While Gears 3 never quite matches the consistent mood or grim atmosphere of Resistance 3, it still has the artistry to vary the pace, build up the tension, and throw in a range of different scenarios. While the cover-based blasting never really changes that dramatically, a sequence where you fight feral Locust through bunkers and an underground lair feels very different from the last-ditch defence of an old fort, which itself feels different from a series of battles in the ruins of a city besieged by brand new peril. Despite stretches where the game reverts to formula, there’s always a new challenge or epic battle lying in wait around the corner. What’s more, Gears 3 now has a weapon set to rival the best shooters in the business, with more real variety than Killzone 3 or Halo: Reach and some of the most imaginative arms outside of Resistance. 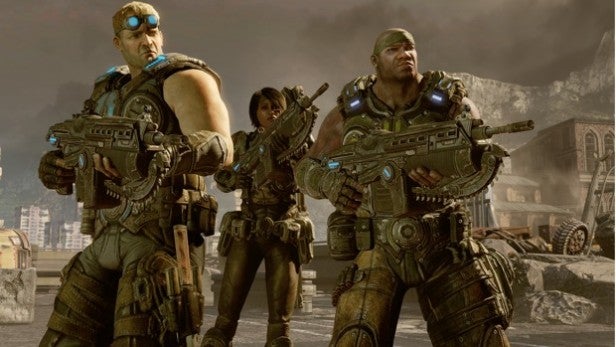 With the mutated Lambent even more in evidence than in Gears 2, there’s no shortage of variety on the enemy front, either, and while neither the Lambent or Locust forces fight in a particularly tactical manner, they’re tough enough and deployed cleverly enough to make you work hard through every stage. Old favourites re-emerge in new, more dangerous forms, and new threats emerge that give you something new to think about. Thanks to a recharging health system and revives from allies there’s not a lot of dying in Gears 3, but certain sequences will stretch your abilities and give you that feeling that you’re fighting against overwhelming odds. It’s also worth mentioning that your CPU-controlled comrades are handled very well indeed, giving able support but never hogging the spotlight. With its more squad-based structure and emphasis on a wider cast of characters, Gears 3 does a better job than any other shooter we can think of of making you feel like part of a fighting team. 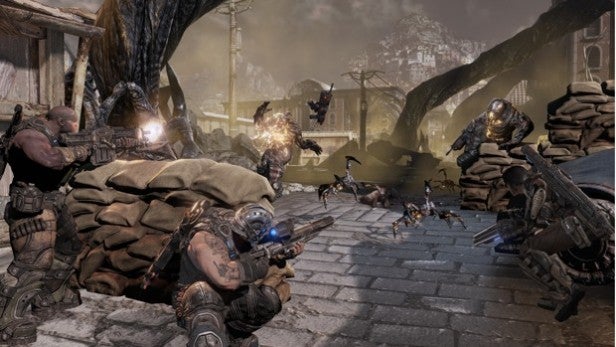 If the game struggles anywhere, it’s in conveying the emotional depths that it now clearly aspires to. The first Gears was wildly ridiculed for its meat-head heroes and slightly uninvolving story, and while Gears 3 follows on from Gears 2 in working hard to turn this around, it rarely achieves the pathos you can see it reaching for, though their is an amazing moment where this threequel reaches back to the first game with surprising sensitivity and understatement. Plot-wise, Gears 3 has plenty to interest and intrigue fans of the series, but it’s hard for a game this macho and this badass to work on any other level.

In terms of multiplayer action, Gears 3 builds on the strong foundations of Gears 2. The competitive modes still feel unlike any FPS game; the nature of the gameplay makes it a game of slow builds and sudden bursts of violence. It’s the co-op modes, however, where Gears 3 really shines. The tuning of the campaign to four-player co-op works impressively well, while Horde mode – where players work together to beat wave after wave of Locust beasties – is still one of the best experiences of its type, beating CoD’s Zombies mode and Halo: Reach’s Firefight mode thanks to its rich Locust bestiary and brilliant weapons, and matching F.E.A.R. 3’s excellent Contraction mode for tension. 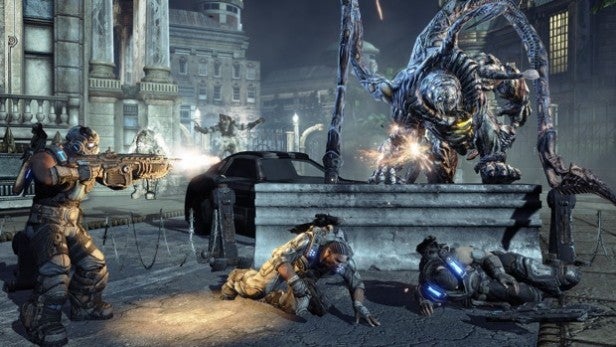 However, Gears 3 has a new treat in store: Beast mode. Turning Horde on its head, it’s all about wiping out the muscle-bound Gears and humans as a member of the Locust horde. You start off with a few basic Locust forms to choose from, and the more you hurl yourself against the human barricades, slashing and blasting at their puny flesh, the more interesting and powerful forms you’ll get to take on; not just the drones and wretches, but the exploding tickers, cleaver-wielding butchers, beefy maulers and bloodmounts (with an AI-controlled Beast Rider atop). It’s strange, slightly messy and undeniably chaotic, and the spike and razor wire defences take some getting past, but it’s the best kind of mayhem. 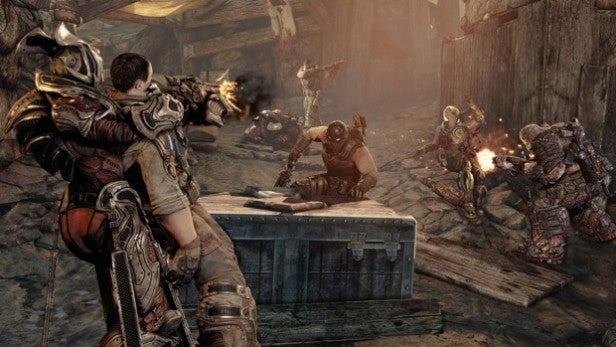 Gears 3 isn’t perfect. Naysayers will carry on complaining about its linearity and its adherence to established formulas, and the games occasional slump into the pedestrian definitely holds it back from a ten. Yet the package as a whole is worth every superlative we can throw at it. Gears of War 3 is an exceptional action game and a fitting finale to a series that has, in many ways, set the standard for the current console generation. It’s not the end of the saga, by any means, and we eagerly await what Epic has to show us next.

Verdict
One of the Xbox 360’s most outstanding action games, and a new benchmark for epic sci-fi spectacle, Gears 3 is simply unmissable.