Because I’d currently rather spend my time playing Resident Evil 5 than writing about Resident Evil 5, I’m going to break the habit of a lifetime and cut to the chase. In case you haven’t heard already, Resident Evil 5 is not as good as Resident Evil 4. It’s not ground breaking. It’s not going to revitalise the series or the survival horror genre as a whole, and in many ways its play mechanics and indeed its whole approach are curiously dated. Visually it’s stunning, but there are things going on here that really have no place in a 2009 blockbuster title. I wouldn’t say that Capcom is resting on its laurels, but there’s a definite feeling that the developer did all the heavy lifting with the last instalment and is now content to carry on that style. Basically, Resident Evil 5 is to Resident Evil 4 what Resident Evil 3 was to Resident Evil 2; It works with and develops styles and ideas and themes from its predecessor, but focuses more on delivering solid, balls-to-the-wall action than on finding whole new ways to thrill and terrify. 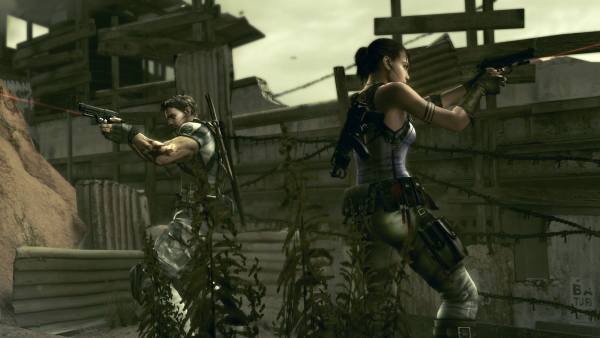 To some extent, this is a disappointment. For much of its running time – bar one key difference that we’ll come to later – Resident Evil 5 plays and feels a lot like Resident Evil 4. The change of setting, from a fog-bound, rustic Europe to a sun-drenched vision of Africa, feels skin-deep. The new zombies, the Majini, are much the same as the old ones, Los Ganados, albeit with some new variants brought in by the upgrade of Los Plagas to a version 2.0. For all that we get tribal warriors instead of killer monks and oil-refineries and underground temples instead of research complexes and castles, the differences seem cosmetic. Crowd control with handgun, shotgun and sniper rifle is still the main course, with boss battles, quicktime event action sequences and spots of exploration on the side. It might be a welcome return for RE1 star Chris Redfield, but were Leon Kennedy on centre stage you probably wouldn’t raise an eyebrow. 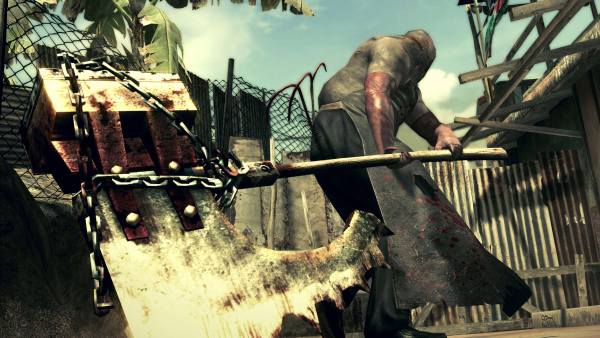 Inevitably, familiarity has drained some of the shock factor that made RE4 so terrifying. We’re now used to fast-moving zombies who attack you from every side, drive you to the rooftops and force you to conserve your ammo. We’ve had them smash through the windows, climb over counters and knock down the doors. We’ve developed tactics for the gits who throw Molotov cocktails and the ones who pace towards you, hunkered behind shields. RE5 is happy to take most of its ideas wholesale from Resident Evil 4, to the extent of recycling boss battles and incorporating the earlier game’s iconic chainsaw-wielding maniac. 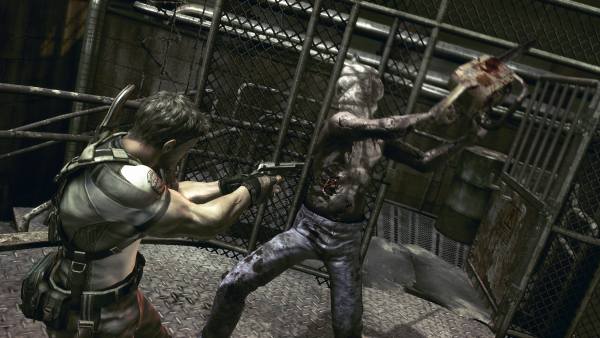 The real shock is that Capcom has done little to change the controls or some of RE5’s most dated game mechanics. The aim and fire buttons have now moved to the triggers, Call of Duty style, in the default configuration, but while shooting you’re still effectively rooted to the spot. For manoeuvrability, think Land Rover Discovery, not Mini Cooper. Some think the restrictive behind-the-shoulder view and equally restrictive controls are part of what makes Resident Evil 5 so cinematic and so scary, but there’s a good chance that you will find the combination infuriating at some point during the game. I know that I certainly did.

Inventory management remains a nightmare. You now have nine boxes per character which you can fill with any object of any size, but the further you go on in the game, the more nightmarish this gets. Because different weapons suit different situations, and because health and ammo are scarce, the game positively encourages you to horde, but later on you find that you can’t pick up, say, the shotgun shells because your nine slots are all full, even though all your other guns are empty and one slot is occupied by – tada! – the empty shotgun. Drop the shotgun or any other weapon and it’s gone for good, so you either drop something else or risk needing the shotgun in two minutes time and not having the ammo to fill it. It’s truly teeth-grinding stuff, and needlessly annoying. 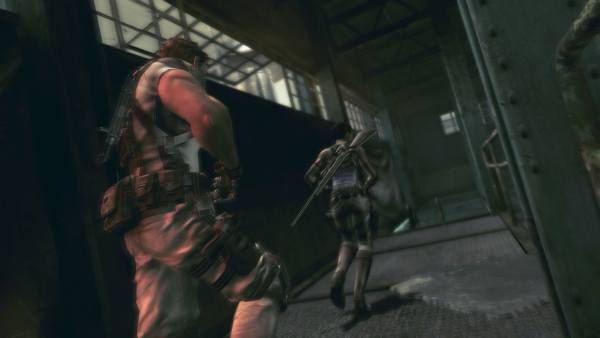 And while I’m on the warpath, let’s talk about checkpointing. Most of the time the game gets it right, but there are times when a death will put you back twenty minutes of zombie slaying, object gathering and lever pulling at a time. Worse still – you can’t always rely on the game having saved your progress at the last checkpoint when you switch off your console. In one case, I had to repeat an hour’s play because the game had saved my character’s status, but not the point that I had reached (even though the Saving message had appeared). 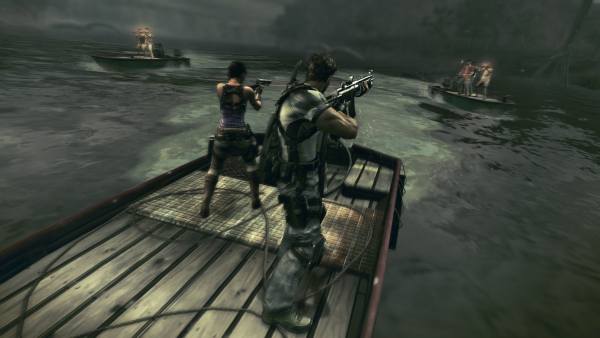 All of this stuff would be enough to doom most games to a mediocre 6 or a could do better 7 when we get to the final score, but luckily – and for all its faults – Resident Evil 5 is not most games. I’ll admit that I’m not 100 per cent happy that the series has taken such an action-oriented direction, or that the game has ditched much of the puzzling that used to be a Resident Evil hallmark (I’m not even sure you can call ‘pull the next lever’ a puzzle unless you’re a barely-functioning imbecile). Were Capcom to consider a more restrained, back-to-basics game that put the ‘horror’ above the ‘survival’ next time around, I’d be delighted. RE5 isn’t actually all that scary. I’m even slightly alarmed at the intrusion of several button-battering quick-time cinematics and – urgh! – on-rails shooter sections in the game. Yet for all my complaints, there’s just no denying that this is one of the most polished, cinematic and compelling horror-flavoured action games around. 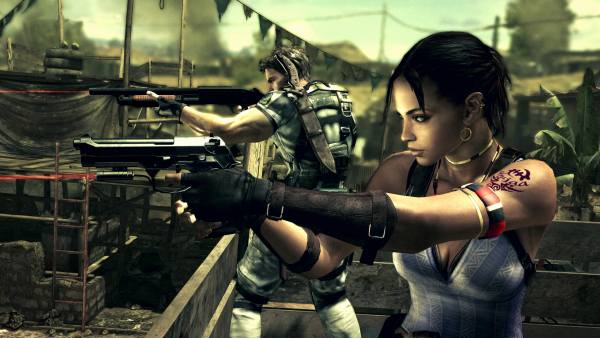 Part of this comes down to the game’s one major change to the formula – the addition of a co-op character, Sheva Alomar. In the single-player game she provides backup and covering fire with varying degrees of success; she’s accurate, but she’s rather slow to fire, and you’ll find some bewildering sections – the worst involving giant crocodiles – where she’s happy to stand around and do nothing while you’re brutally mauled. You can call her to your position and ask her to attack or watch your back, but otherwise your management of her is restricted to sorting out her inventory; swapping items back and forth and keeping anything she might waste (I.e. herbal remedies, grenades and first-aid sprays) well out of her way.

Sheva’s value lies in the fact that she’s available to play as a second hero in online and offline co-op modes. This isn’t just a feature tick box thing. Capcom has found some ingenious ways to make RE work as a co-op title, using broken ladders and lever puzzles to separate you, and forcing you to cover, guard and heal each other in ways that make Army of Two’s efforts to do the same seem dull and unimaginative. Even playing single-player, I’m struck by how much thought has gone into this, and if you have a friend with the same console or you have a screen big enough to share, then RE5 can be considered pretty much essential. 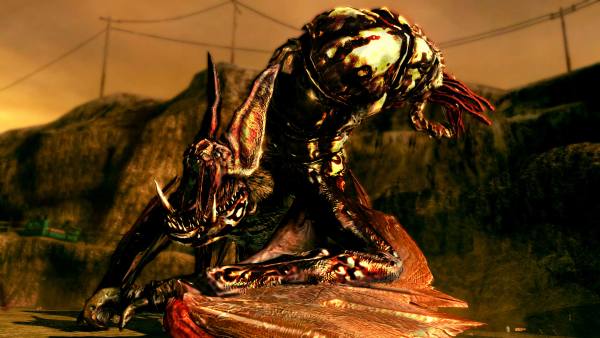 What’s more, RE5 shows that Capcom hasn’t lost its way with the great art of the set-piece – a fear that will have been shared by anyone who played the mediocre Lost Planet. RE5’s best bits are very, very good indeed, mixing up different strains of Majini to keep you on your toes, then blindsiding you with a surprise assault or some big brute that you never expected. It might not be all that innovative, but RE5 is never boring. It’s the sort of game that’s very hard to stop playing, because you just have to see what’s coming next.

Finally, RE5 is a fine example of how good Capcom is at handling artistic style and mood. Visually it’s hugely impressive, perhaps not on the same technical level as, say, Killzone 2 or Gears of War 2, but using lighting and post-processing effects in a range of subtle ways that make the game and its characters look totally convincing, even when the plot and characterisation is – in typical RE style – utterly hatstand.

The character art and modelling is particularly stunning, whether we’re talking about Sheva’s gorgeous, endlessly watchable curves or the hideous, pulsating organs of some vile, unnatural beast. Chris might be another gun-toting beefcake, but he’s an awful lot more solid and believable than your usual Marcus Fenix clone. And while the storyline is faintly ridiculous, making a heroic but doomed attempt to tie the events of RE1 to 3 in with the events of RE4, there’s still something horribly compelling about it. As our hero’s journey pushes on to the inevitable, overblown conclusion, it’s hard not to get caught up. 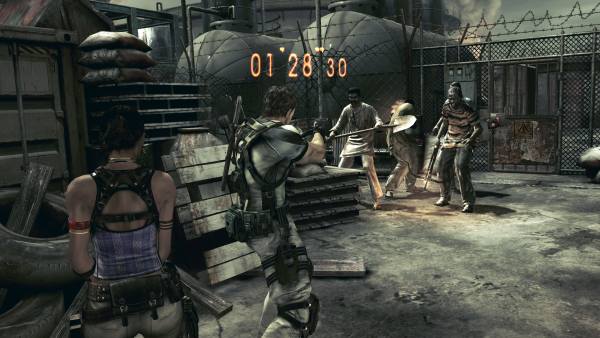 Is Resident Evil 5 a classic? No, and that’s why we’re holding off on the awards and dialling down the hyperbole a jot. Yet I can’t help feeling that it’s a brilliant game, and one that any fan of the series will want to see through to the end. I wouldn’t rank it up there with the high points of RE2 and RE4, but I’d certainly put it above RE3 or RE Zero. There’s no doubt that EA’s Dead Space was a scarier and more imaginative game, but I couldn’t say that RE5 is any less enthralling. Let’s hope that Capcom will shake things up next time and fix the series’ remaining antiquated features, but there’s no reason to get too angry or too downbeat about this episode: RE5 is still very good as it is.

Resident Evil 5 plays it safe and a little too close to RE4’s established formula and slightly dated play mechanics, but Capcom’s assured handling of atmosphere, style and action makes it an experience that’s just too good to miss.