Some games make you think that originality is over-rated. Dead Space is a fine example. A heady cocktail of sci-fi and horror games and movies, there’s barely a truly new idea to be found in it. Without ”Alien”, ”The Thing” and ”Event Horizon” it would probably never have existed. Without Doom 3, Resident Evil 4, System Shock and Half-Life 2, it’s hard to imagine a world with Dead Space in it. Yet despite the fact that you can see so many elements stolen or borrowed, this is a fantastic survival horror game. In fact, it’s easily the best in the genre since Resident Evil 4. 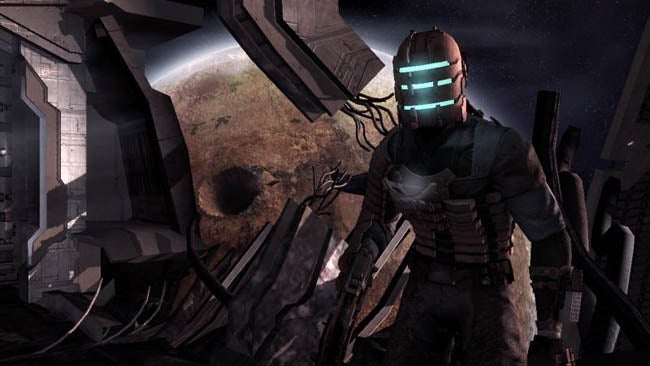 You can safely put this down to three things: atmosphere, slick game mechanics and the sort of polish that you wish all games would do their best to emulate. Basically, Dead Space bends over backwards to give you a genuinely scary, suspense-packed and thoroughly enjoyable experience – and that’s for everyone, not just the hardcore few who can be bothered to put up with the huge difficulty spikes or frustration that are too often part and parcel of the survival horror game. It’s still got enough depth to keep the more ardent gamer happy, but it never does so at the expense of the more casual crowd. I can see a few snobs turning their nose up at this, but I think EA should be congratulated on doing a brilliant job. 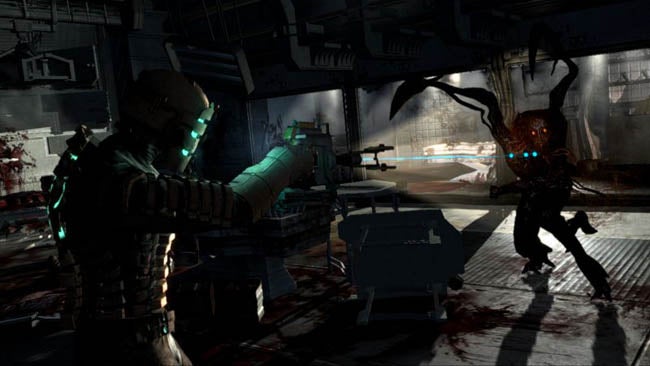 The opening gives you a pretty good feel for Dead Space straight away. The setup – troubleshooting team arrives to investigate spacecraft in distress, discovers all hell has broken loose – is pretty much a cliché, yet Dead Space’s presentation makes it feel as compelling as any big blockbuster movie. Of course, it helps that Dead Space looks like a big blockbuster movie. EA’s in-house engine powers an amazing looking game, with detailed, lifelike characters and environments, awesome real-time lighting and a dizzying array of post-processing and particle effects.


The viewpoint is a variation on the over-the-shoulder view of Resident Evil 4 while the overall style is reminiscent of Doom 3, but that doesn’t really do justice to how strong the game looks. It’s gloomy, gritty, horrendously gory and the stuff of futuristic nightmares. This is what a next-gen survival horror game ”should” look like. 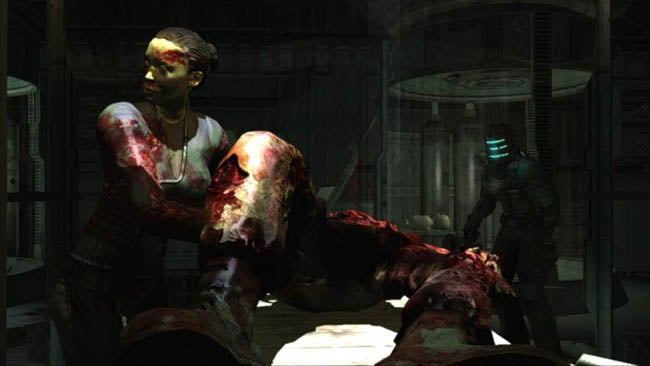 Perhaps more important than how it looks, however, is how it sounds. I played the majority of Dead Space through headphones and I can honestly say that it’s the sort of experience where it’s best to wear brown trousers. Things scuttle out of sight through the dark, metallic corridors. You can hear telltale growling or clanking somewhere to your left, shifting past the back of your head and creeping somewhere to the right. When you’re under attack from numerous monstrosities – and you will be – the music swells until you can feel a little knot of panic in your stomach.


Meanwhile, the frantic radio and video messages from your team-mates and the audio/video logs you’ll discover only serve to accentuate the game’s overwhelming fear factor. That’s the thing about Dead Space; you’ve seen or heard all of this before – the dark corridors, the unlit chambers, the logs, the lurking horrors – but EA’s game uses the power of the PS3, 360 and PC to take it to a whole new level.

The creatures, meanwhile, are really nasty. Again, there’s nothing here you haven’t seen before from iD, Valve or Capcom – and at times Dead Space comes frighteningly close to homage – yet these guys gave me the heebie jeebies like I haven’t had for ages. EA’s one major tweak is to make the vulnerable spots not the usual places, like the head or neck, but the limbs. The fiends advance on your like hell-spawned variants on Mr Tickle, their evil, razor-clawed limbs stretching towards you. Some move fast. Some fling themselves at you. There are little ones that swarm you, medium sized ones that fire projectiles at you from their tentacles, and some genuinely terrifying gits that can’t be killed.


Using a range of cutting and slicing projectile weapons, your engineer hero has to – literally – tear these ugly muthas apart limb by limb. For once we’re out of the familiar realms of pistol, assault rifle, shotgun, rocket launcher and into a scary new world of plasma cutters, line launchers and rippers. Each has an ingenious secondary fire mode, giving you one of the more satisfying arsenals I’ve come across in ages. 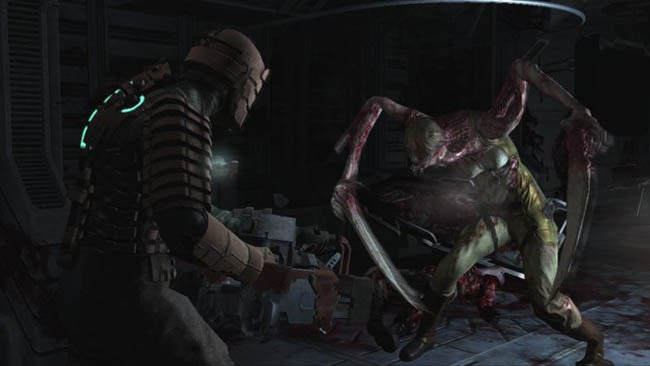 There’s more praise coming: the storytelling and pacing are just excellent, each chapter giving you a series of tasks to do that take you up against new threats and into interesting new territories, and each culminating in a satisfying climax, whether it’s a kind of boss battle, a new plot twist or a cool set-piece. Gameplay ideas are rifled from Half-Life 2 (the Gravity Gun), F.E.A.R. (a slow-mo device, though more used in puzzles than combat) and Prey (lots of monkeying around with gravity), but they’re all used with a real panache and there are few stretches of the game that could be described as dull or monotonous.


And like the Half-Life saga and Bioshock, Dead Space knows the value of a strong but basically anonymous hero. Isaac Clarke (spot the nods to sci-fi history) doesn’t say much, but he makes a great point of identification for the player. Sure, there are moments where you can’t help thinking of Doom 3 – Dead Space pulls a lot of the same sudden shock and ambush tricks – but Dead Space is a more consistently thrilling and frightening game. True, it’s not as long or as varied as Resident Evil 4. Still, much as I love Capcom’s bizarre plotlines and eccentric melodrama, Dead Space feels a little more coherent and believable. 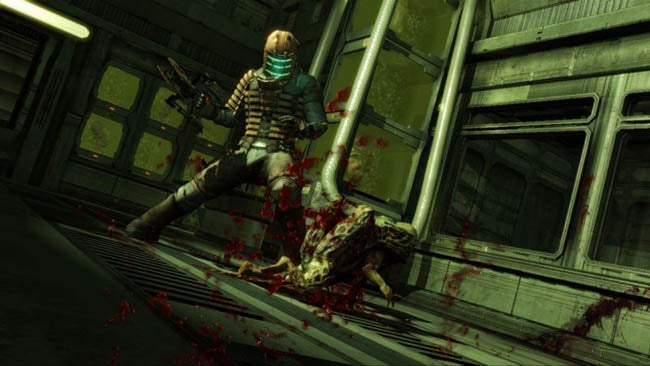 EA has also worked in a lot of mechanics that make Dead Space a more streamlined, absorbing and accessible game to boot. One of the game’s cleverest conceits is that Clarke’s suit projects a HUD onto the environment, and the game uses this to control all switches, options, information and inventory management without ever dragging you out of the game. Lost? Unsure where to go or what to do? Just click the right thumbstick down and a blue line appears momentarily on the environment, showing you the route to your next objective without patronising you in the way that Perfect Dark Zero’s infamous markers were so prone to.


Plus I can barely remember a survival horror game where automatic checkpoints and manual save points are so regularly and sensible placed. You will inevitably die and reload in a game like this, particularly once the ammo and health starts getting scarce in later stages, but will you find yourself repeating long sections over and over until you feel like giving up? Thankfully not.

Not that the game has abandoned the more hardcore gamer. Combine the gravity-gun like telekinetic power and the explosive canisters and sharp objects in the scenery and there’s some room to experiment with alternative methods of monster destruction, while a comprehensive system of weapon and suit upgrades gives you a chance to customise your character and play the game your way. We’re not talking Bioshock here – let alone System Shock – but Dead Space is a richer, deeper game than first appears. 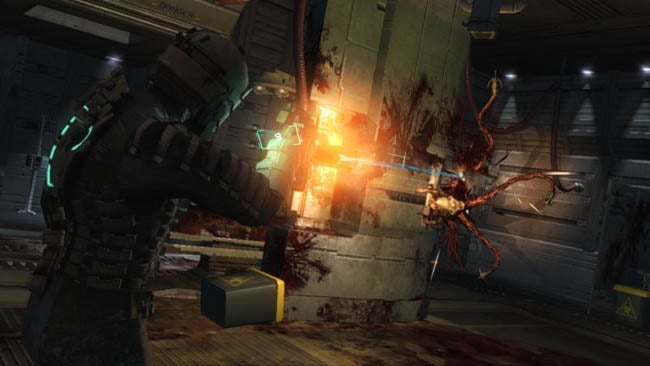 OK, so there is a little bit of repetition as the game goes on, with the game cheekily revisiting areas you’ve already been to once the game gets to its halfway stage, though you will see new areas and new creatures and characters which stop the game falling flat. You could also argue that once you’re used to the basic gameplay – and you’ll have a head start here if you’ve played Resident Evil 4 – it doesn’t do much to stretch you or surprise you, and all those gloomy, industrial spaceship interiors do have a risk of getting dull. 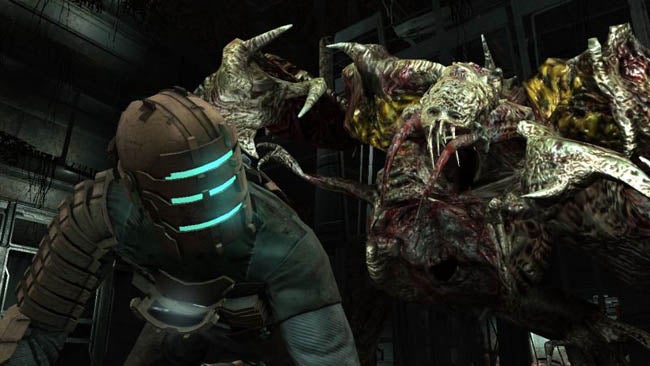 Still, none of this stuff can spoil the incredible sense of raw panic that the game instils. When you’re being chased around a room by demonic, clawed creatures, trying desperately to avoid lethal spots of bad gravity, or when you’re fighting through a series of airless chambers, watching your supply run down while fending off monsters in a noiseless vacuum, you’re not thinking how derivative Dead Space is; you’re just in there, fighting for your life.


EA gets a raw deal from a lot of gamers, and often the company deserves it. Content to shove out franchise update after franchise update after lacklustre licensed game, it’s been responsible for an awful lot of mediocre games. Dead Space does a lot to redeem this. It’s not original and the plot and gameplay tail off a little after an incredible first few hours, but this is still a really great title. The nervous, easily frightened and generally lily-livered should give it a wide berth. Everyone else should get stuck right in.


A five star, flesh-crawling, scary sci-fi feast. While you can hardly describe it as original, Dead Space is one survival horror game you shouldn’t miss.