Be sure to check out our news hub for all the latest information on Destiny 2.

Eight months on since launch and with the final part of the season pass having just been released, it’s time to look back at Destiny 2 and see how Bungie’s sci-fi shooter is holding up.

Destiny 2 is a hybrid first-person shooter which mixes classic shooter gameplay with elements from other genres, most notably MMORPGs. You play the role of a Guardian, a defender of last city on Earth who wields a power called Light gifted by a giant alien moon called the Traveller. Gameplay takes place across a series of hub worlds in the form of various planets and moons within our solar system. There’s a heavy focus on loot and grinding for better stats and gear which which to equip your character.

A robust story campaign acts as a solid introduction to Destiny 2’s systems and universe, but things don’t really come to life until you’ve finished the main plotline. From there you can explore the various hub worlds, compete in competitive multiplayer or team up with your fellow Guardians to take on Strikes – instanced missions distinct from the main world which offer further insight into the universe and lore as you with take down a powerful foe.

If you’re returning to Destiny 2 after a long hiatus, you’ll be struck by just how little has changed since launch. There have been tweaks and rebalances for sure, but unless you’re willing to pony up the extra cash for the DLC add-ons, Destiny 2 has very little to offer returning players. The value proposition is still mostly intact for new players though, so if you’re considering diving in fresh then you’ll find plenty to like. 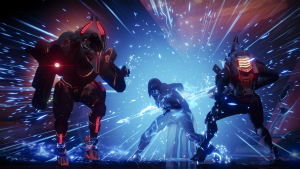 Bungie has a legendary pedigree in the FPS market having created the Halo series and hasn’t lost its touch since the split from Microsoft. No other game in existence comes close to nailing the gunplay in Destiny. Every weapon class feels distinct and viable and even two guns of the same type can feel worlds apart. It has never been this fun to shoot things, which is good, because you’ll be shooting all of the things.

The campaign is an entertaining romp through some of the more obscure parts of our solar system as you seek out a way to defeat the evil forces of the Cabal. The introductory cutscene shows the Dominus Ghaul and his Red Legion doing a spot of light redecorating on the Tower – Destiny’s hub world – and blowing it to pieces. They also attach a moon-sized chastity belt to the Traveller, which sucks the light out of the Guardians, leaving them powerless to defend themselves. It’s an intriguing set-up which establishes you as the underdog in the fight right off the bat.

But while the campaign is certainly enjoyable, it’s also entirely forgettable. I played it through several times when the game launched, once for each character class, and barring a couple of amusing one-liners from Cayde-6, the Vanguard of the Hunter class, I can’t remember much of what happened. Bad guys turned up, there was some mild peril, and everything was back to normal by the end.

When you’re done with the campaign, your goal changes from saving the world to acquiring better gear. Loot is the name of the game in Destiny 2 and basically everything you do will be in search of a sweet new pair of kicks and a matching rocket launcher. You’ll find all this new stuff by completing strikes, multiplayer matches and events scattered across the hub worlds. New gear drops at a slightly higher level than your current equipment, so there’s a steady stream of goodies coming your way until you hit the upper limit, though you’ll have to look to specific missions like the Nightfall strike and Raid to eek your way up through the last few levels.

The endgame for all this grinding is the Raid, a massive six-person mission to take down the former Emperor of the Cabal aboard his enormous spaceship. Much like the original Destiny’s raids, this mission requires a mixture of knowledge, teamwork and skill to complete. It also requires you to have 5 friends to play with, as there is no matchmaking. This isn’t a complaint though, as raids can be infuriatingly difficult even with a full team of communicating players, never mind a team of random strangers.

There are a couple of changes to Destiny 2 which will benefit new and old players alike, the most prominent of which is that DLC multiplayer maps are free in public matches – you only need to own the DLC to play these maps in private matches. Activision was the last bastion of the map pack as other publishers transitioned to models which don’t split the player base, so this change was inevitable, but welcomed nonetheless. Speaking of private matches, they’re now a thing too.

One of the more noticeable changes between Destiny and its sequel was the changes to weapon loadouts. Where previously players could carry both a special and heavy weapon, now both options are rolled into one power weapon slot. The aim was to bring balance to the multiplayer modes by reducing the amount of one-hit kill weapons in the game, but in a game where someone can mash a button to become an unstoppable lighting wizard or summon burning hammers from out of thin air to throw at you, cheap deaths are unavoidable.

The other casualty of this change was Destiny’s PvE game modes. Even if you take the multiplayer balancing argument as written, the changes are universal meaning PvE players are lumbered with it too. Reduced weapon options mean reduced gameplay possibilities and given the repetitive nature of Destiny’s PvE content, these changes only serve to homogenise the experience. 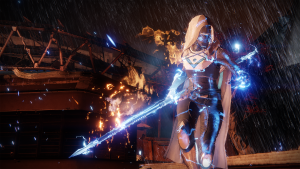 Another major change was reducing the player count in standard PvP matches from six down to four per fireteam. The majority of Destiny 2’s PvE activities are limited to three player teams, with the raid doubling the number up to six. Now the maths doesn’t work as fireteams are perpetually over or under staffed as they switch between PvE and PvP modes.

This new emphasis on small fireteams sticking together and focusing fire also leaves the PvP feeling unwelcoming to solo-players who don’t have a full fireteam to roll with. It should be noted that the special Iron Banner multiplayer mode has returned to 6 vs 6 gameplay, but this mode is only active during specific events.

It’s weird to re-review a game and concentrate so heavily on issues which have been with it since launch, but it speaks to Destiny 2’s failure to advance beyond its starting position. Apart from the paid DLC content, the latest of which we’ll get to in a separate review, basically nothing has changed since launch. There have been tweaks and balance changes, but if you’re coming back to Destiny 2 after a hiatus, there isn’t anything new here for you beyond new and exciting ways to spend money on emotes and shaders.

Even if you do count the Trials of Osiris DLC as part of the package, the paltry campaign it offers is both painfully short and intensely repetitive. Considering the price of entry stands at £17, it’s a poor showing from Bungie.

Despite all the criticism of its additions (and lack thereof) since launch, Destiny 2 remains a fantastic title for new players to pick up. A robust and entertaining story campaign is offered alongside a host of side activities that will keep you occupied for ages. But for players who have already done all that stuff, Destiny 2 has precious little to offer you, even if you’re willing to throw money at them for DLC.