There’s so much to love about Prey. It takes inspiration from all the right places, introduces a gorgeous environment awash with detail and a great sci-fi-meets-art-deco feel – and it couples all this with an absolutely stellar score. While the core combat and lead character fail to excite, simply exploring Prey’s space station is a joy.

If you’ve played Dishonored, you’ll be familiar with what developer Arkane does well: presenting incredible playgrounds in which the player can wreak havoc, finding myriad ways to unlock its secrets. Prey does this right from the start. Exploring the Talos 1 space station, learning its rules, then discovering how our protagonist, Morgan Yu, can break them is consistently rewarding.

Entering the lobby – the game’s first hub area – you’ll be presented with a series of doors, some of which Morgan has access to; others require keycards to open. But of course, a locked door is simply a challenge in Prey. There’s always an alternate pathway.

Climbing ledges, finding vents, or creatively using Yu’s GLOO Cannon to shoot rock-hard lumps at surfaces to create your very own climbing wall, you’re rewarded by thinking outside the box. 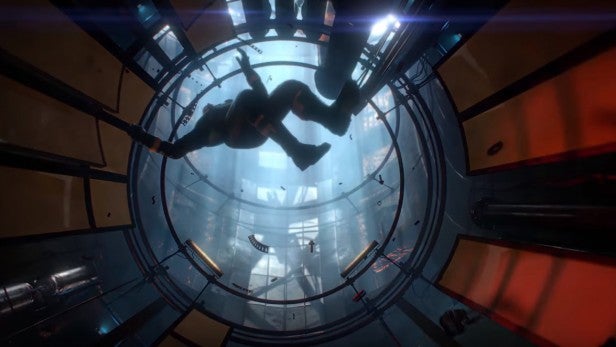 Energy, Morph and Telepathy, meanwhile, are literally how the magic happens. Using these paths Morgan can transform into any small object to gain access to otherwise blocked doors. I was able to get into a reception by rolling through a reception desk’s small window as a cup and then as a shoe. I was able to hack the brains of enemy Phantoms, so they’d turn and fight for me and even deliver my own Psychoshock blasts for immense damage.

But here’s the catch: venture too far into Typhon upgrades and turrets will turn hostile towards you. In the game’s early hours I relied heavily on turrets to defend against the tougher Typhons, but then they became the enemy, meaning I also had to upgrade Morgan’s hacking skills to prevent them from being a problem.

Balancing the tech tree is a great part of the game, and learning to spend Neuromods wisely becomes a fun challenge.

Arkane has also created an excellent enemy in the form of the Typhon. There are various types, but some enemies, in particular, stand out more than others – mainly those with a horror slant – creating far more memorable encounters. Mimics can take the form of any object in the environment, meaning that mop bucket, stack of paper or medkit you desperately need may actually be the thing you were running from in the first place.

The moments that Mimics leap from their disguises are scary, but when accompanied by a brilliant musical score to further heighten the intensity, they’re positively horrific. 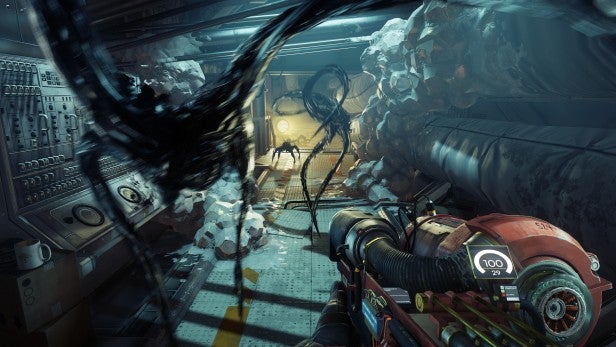 The Poltergeist is also a brilliant enemy. As the name suggests, this Typhon appears first by manipulating objects in the environment, either by a flickering TV screen or levitating everything in a room – and, again, the music really adds to the fear of trying to find the creature.

These encounters are truly the highlight of Prey’s combat, reminiscent of the likes of Alien: Isolation and Outlast, where you feel vulnerable at all times. No game has made me batter a bookshelf with a wrench before.

However, while Prey certainly does well to showcase Arkane’s strengths, it also sheds light on some of the developer’s weaknesses. Combat was never the Dishonored series’ strong suit, and in Prey it suffers too.

While the initial threat of waiting for a Mimic to appear from anywhere and in anything is terrifying, actually engaging in prolonged fights can become dreary. Arkane has done a good job of encouraging players to make the most of their varied arsenal, and there are as many options to deal with the Typhon as one could hope, but the actual handling isn’t particularly satisfying.

Guns can lack the punch one would hope to feel when they’re used, and when taking damage from enemies, it’s hard to know whether you’ve been dealt a near-death blow or barely suffered a scratch.

Also, being such a large space to explore, the game suffers with considerably long load times. Not every door will use a load screen, but moving from one large hub to the next can see load times of comfortably over a minute. This becomes incredibly annoying when you have to run back and forth from one area to the next so you can use a Recycler to get rid of old junk to create new medkits from the harvested materials via the Fabricator. Overall, the story is excellent. Finding out what happened in this alternate history – where John F Kennedy survived his assassination attempt, leading to a great advancement in space exploration; and what became of US-Russia relations – was way more interesting than I expected. This is one of the few games where I actively sought magazines, emails audio transcribes and notes sprawled around the game to find out more.

This also made side missions interesting. There’s a lot more flesh on the bone of the core narrative – which is, strangely, surprisingly thin on information; and Morgan Yu is a big part of the problem.

Prey’s story suffers because it’s told at Morgan Yu rather than through him. Many games have a silent lead, but when Morgan speaks via January and transcribes, it makes the silence a little strange. While this all ties itself in a neat little bow with the story’s conclusion, along with the inevitable Shyamalan-like twist, it’s a shame that it causes 20-plus hours of frustration and perplexity beforehand.

Players who neglect the side missions and all the emails will be missing the majority of narrative and context of Prey. That’s a real shame, since there’s a lot of good stuff here, making it strange that Arkane has left huge potential for most of it to be ignored.

As the side mission backlog builds towards the game’s conclusion, knowing which one to pick out of three possible choices – where completing one will negate the other two – is a significant part of the experience. And to overlook this means the latter half of the game is left wanting.

Another issue with the game’s final act is a sudden and aggressive spike in difficulty. Things very quickly become overly challenging, and it feels completely at odds with a character you’ve spent over a dozen hours empowering with mods and better weaponry to suddenly feel outmatched and, on occasion, outgunned. 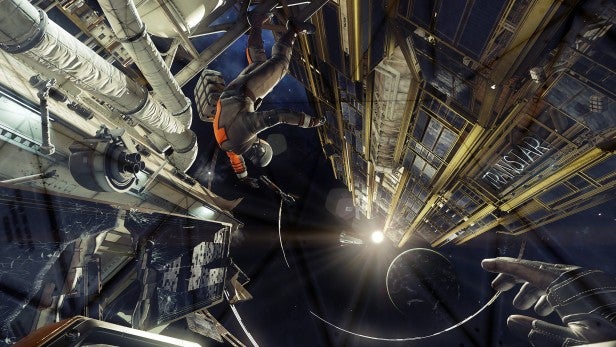 The new villain who shows up towards the very end of the game is also awful. With the narrative arc shoehorned in, rather than a slow build, it disappoints.

Arkane knows how to make excellent games, and has kept up its form with Prey. There’s so much to see aboard Talos 1, and so many ways in which to find it, that the replayability is huge.

I’d definitely encourage players to discuss with others how they completed certain objectives or reached certain areas, since it was only after I was told about alternate routes that it opened my eyes to the sheer number of options available at any one time with regards to problem solving.

Arkane has delivered some outstanding gameplay here, but the story is inconsistent. If you read emails and books littered across Talos 1, there’s something of intrigue here, but the actual narrative told directly to the player will leave you wanting significantly more.

I thoroughly recommend Prey, particularly to those who even remotely enjoyed Dishonored or BioShock – there’s plenty here that will attract attention. It’s a great game.