Like many of the ports that have come to Nintendo Switch - Overwatch isn’t the ideal way to enjoy Blizzard’s excellent hero shooter. It’s a merely passable experience thanks to frankly lacklustre visuals and a level of performance that doesn’t reflect the fast reflexes required to shine on its competitive battlefield.  It’s enjoyable in handheld mode and an undeniable novelty to play such a fantastic shooter in bed, but it still feels hamstrung compared to other platforms. You also need an internet connection to play, so busting Overwatch out on the go won’t always be easy.

Overwatch has finally arrived on Nintendo Switch several years after its original release on other platforms. It could be argued that the millions of players who once centered around Blizzard Entertainment’s ambitious hero shooter have moved on, leaving Tracer and the rest of her imaginative chums behind.

On the flipside, in terms of content, this colourful experience has never been more vibrant – filled to the rafters with heroes, maps and game modes many will be diving into for the very first time. Blizzard has done an excellent job expanding the lifespan of Overwatch, keeping players invested with frequent seasonal events which bring forward new cosmetics for us to fawn over again and again.

However, the proof is in the pudding. If Overwatch on Nintendo Switch doesn’t boast the same silky smooth performance and wonderful accessibility of other versions, it’s easily inferior, and a harder pill to swallow given that it’s also more expensive. But if your only platform is a Nintendo Switch, and you’re desperate to blow fools up as D.Va, it will suffice. Don’t go in expecting your socks to be blown off, though. 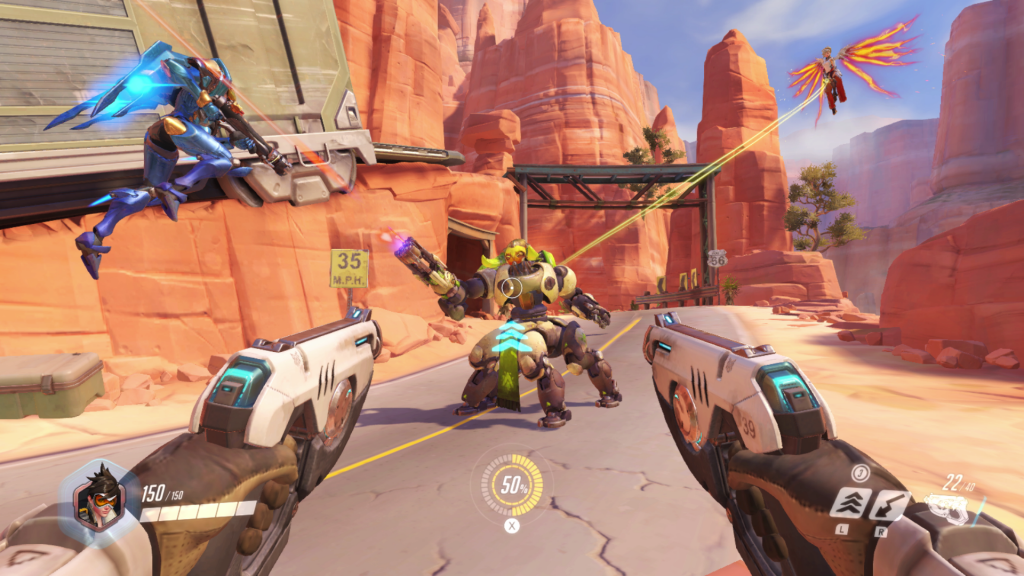 Overwatch on Nintendo Switch is the complete package. Upon booting it up, you’re greeted with the same cinematic intro, the same main menu, and even the same tutorial. No compromise has been made here, ensuring that existing players won’t feel cheated for hoping to play their favourite shooter on the move. It’s only once you’ve jumped into a match that the cut corners begin to show, and it’s not exactly pretty.

When playing in docked mode, Overwatch outputs at a 900p resolution at 30 frames per second. Well, that’s the target, but it sadly fails to hit it on a regular basis. Hectic firefights serve to highlight unexpected drops in performance as multiple heroes battle over objectives. The abundance of projectiles, effects and characters moving about the place with rampant unpredictability is clearly taxing on the hybrid console, preventing the experience from ever feeling smooth.

Docked play also serves to highlight the visual quality, which appears to match the low preset on PC with noticeable pop-in across character select screens and environments.

Amidst the chaos of capturing objectives and moving across battlegrounds as heroes, these blemishes fortunately become harder to spot, but stop and stare and it’s not the prettiest picture. The endless stickers on D.Va’s mech take several seconds to appear, while McCree’s belt remains a strange blurry mess compared to other platforms. 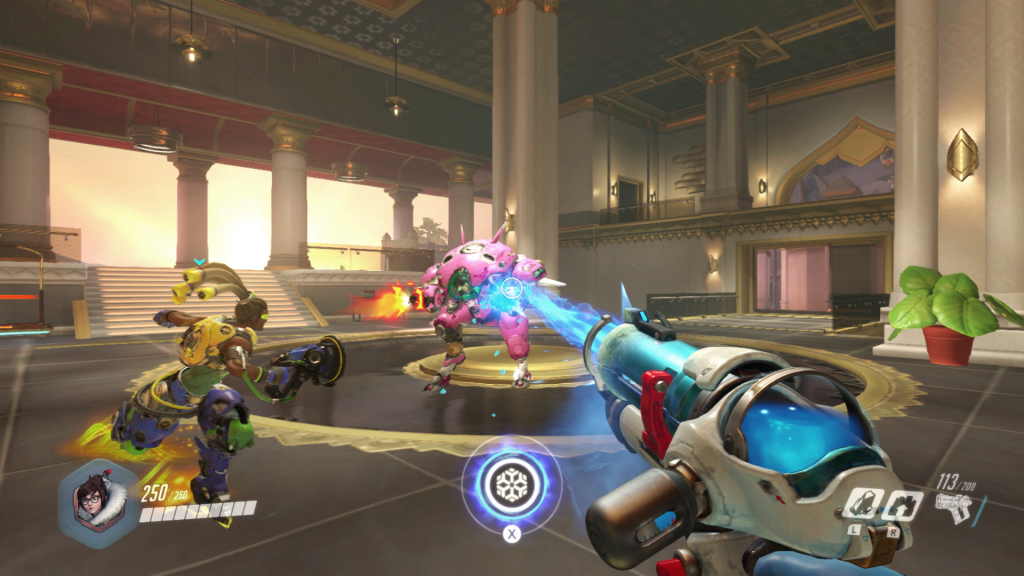 With such a wide gap in power compared to other platforms, I expected a compromise to be made on Nintendo Switch, but at times it can feel like too big of a sacrifice. The majority of my qualms surface in docked mode, where a larger display makes glaring graphical differences all the more noticeable. Much like The Witcher 3 and Wolfenstein on Switch, it’s far, far more enjoyable in handheld play.

On a smaller screen, the reduced visual quality is far easier on the eyes thanks to a lower resolution and smaller display. It looks sharp, colourful and, perhaps most importantly, smooth in motion. It still isn’t perfect by any means, but is definitely the preferred method to enjoy Overwatch on Switch.

Compared to the likes of Paladins and Warframe, as an entirely multiplayer experience this port feels oddly inferior, which isn’t something I expected from Blizzard. It isn’t all bad though, with a few distinct features helping this foray onto Nintendo’s console feel somewhat more unique. The biggest addition are gyro controls, which are switched on by default. It took me a while to figure out that was the case, though.

These allow you to control the camera of your character by moving the console around. In practice, it’s meant to offer a more accurate way of targeting enemies, although it’s far too erratic to achieve such a feat on a regular basis. If I’m honest, it’s a fun distraction I switched off after a few rounds, since it’s not ideal for a fast-paced competitive landscape. It gets in the way, which isn’t a shining recommendation for one of the version’s defining features. 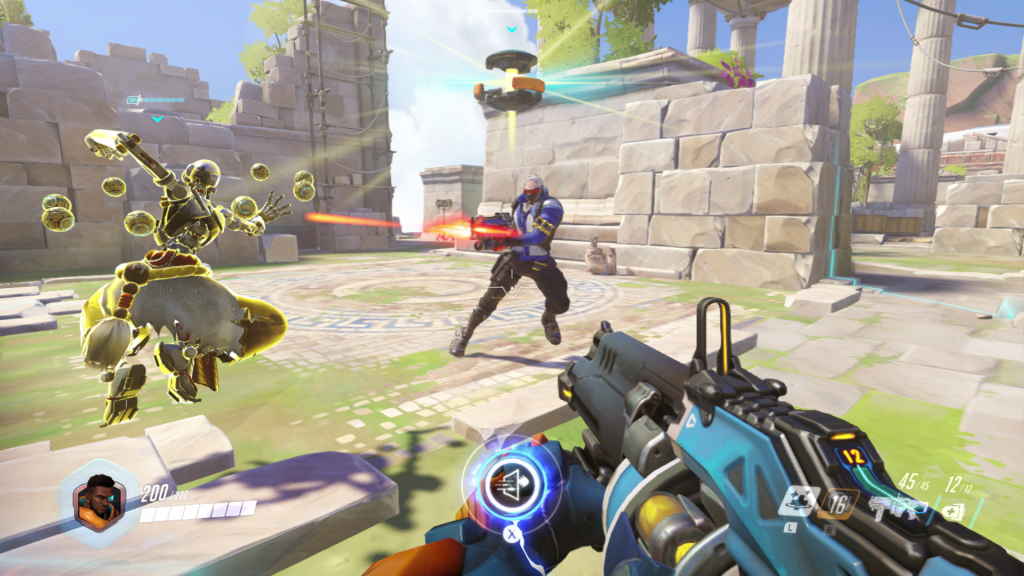 Like many of the ports that have come to Nintendo Switch – Overwatch isn’t the ideal way to enjoy Blizzard’s excellent hero shooter. It’s a merely passable experience thanks to frankly lacklustre visuals and a level of performance that doesn’t reflect the fast reflexes required to shine on its competitive battlefield.

It’s enjoyable in handheld mode and an undeniable novelty to play such a fantastic shooter in bed, but it still feels hamstrung compared to other platforms. You also need an internet connection to play, so busting Overwatch out on the go won’t always be easy.

Since launching in May 2016, Overwatch has amassed tens of millions of players while cementing itself as a cornerstone of popular gaming culture. This is largely thanks to Blizzard’s continuous support, whether it be through free updates, seasonal events or global esport competitions. Separating Overwatch from all the buzz and fanfare, it’s still a fantastic experience that remains focused on fun and diversity.

Overwatch is a first-person shooter centered around 27 heroes (having originally launched with 21, this number continues to grow via free updates to the roster), who reside in one of four categories: Offence, Defence, Tank and Support. Every character offers something unique, both in terms of identity and mechanics.

The moment-to-moment formula hasn’t changed much since its initial release. Matches still reside within three distinct modes: Escort, Assault and Hybrid. Escort follows one team as they guide a payload across the map, passing checkpoints along the way. The other squad must stop them, driving the payload back by outnumbering the number of opponents around it and dispatching enemies. 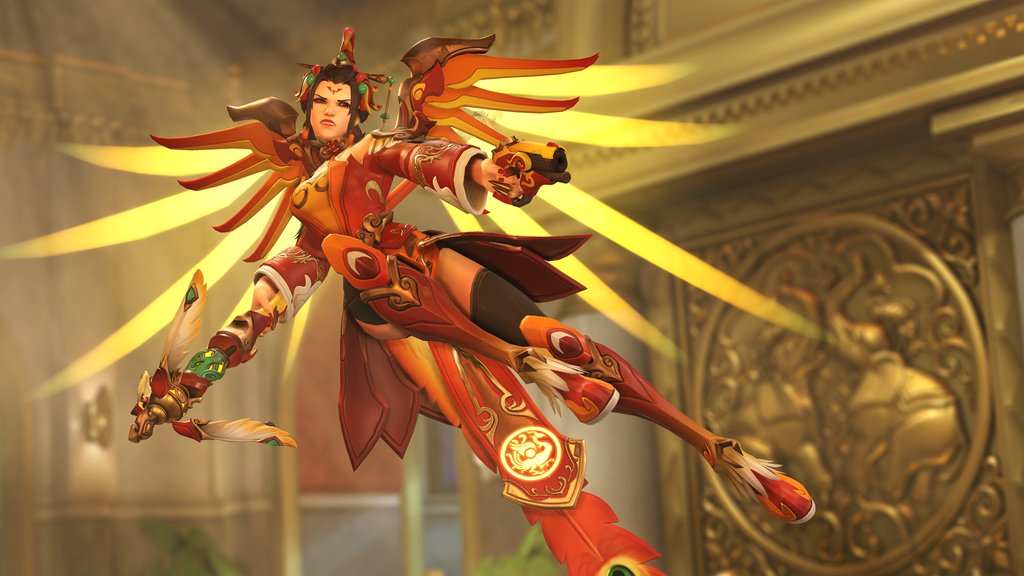 Assault features two points one team must capture, while the other tries to stop them. Hybrid is a mixture of the two: you capture a point before escorting a payload to its final destination. The rules are simple, meaning it’s possible for anybody to jump into Overwatch and give it a go.

After hundreds of hours of play, it still offers up moments of absolutely joy. It’s accessible enough so that a group of friends of differing experience levels can enjoy a match. Although, this ease of access doesn’t stop its staggering cast of heroes from possessing enough nuance that you’re always learning something new. Thanks to Blizzard’s addition of new heroes, this isn’t something I see coming to an end anytime soon.

This is all helped by how good Overwatch feels to control. Every bullet, rocket or beam connects with a satisfying impact as your foe’s health bar depletes. You can switch heroes whenever you like, too. This is encouraged, so that your team has the ideal components to complete the objective. Missing a tank but encumbered by two clumsy snipers? Switch it up and you’ll be surprised at the difference this will make. Every team needs a healer, it’s a thankless task, but being the selfless giver in your squad means you’re an invaluable asset to keep your team alive during the most important moments of a battle. 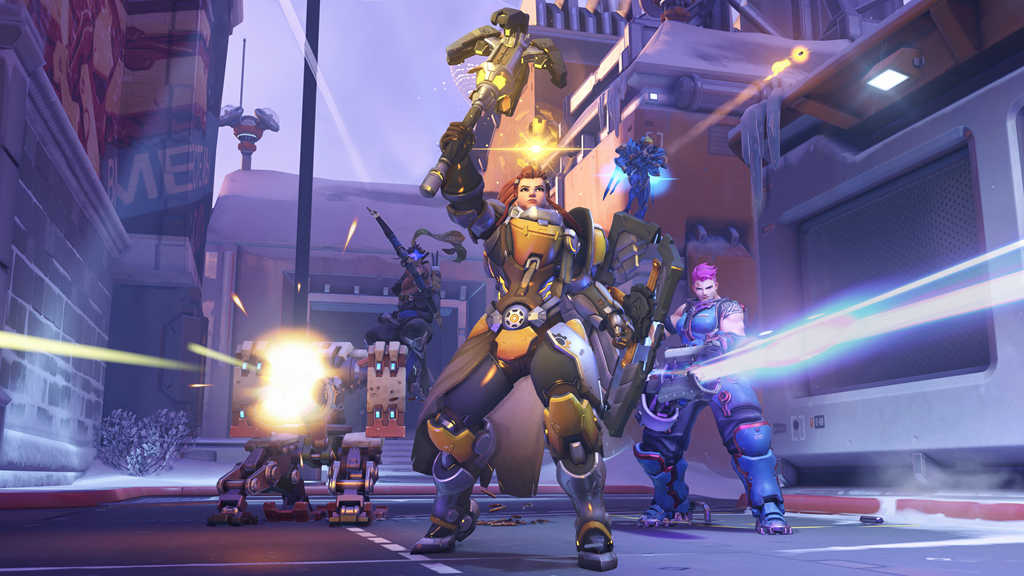 Following its original release you could have multiple versions of the same hero on each team, meaning it was possible to break matches beyond repair. This isn’t an issue now, although it does mean you have to be quick to choose your hero, especially if they’re popular.

Special modes are restricted to ‘Brawls’, played purely for fun and earning a few extra lootboxes. This isn’t the only change Blizzard has made to the formula in the past two years. A multitude of heroes, maps and modes have been refined, too.

Heroes like Symmetra and Mercy have been updated with new abilities that, while not to the appeal of everyone, are emblematic of a roster that is always unpredictable. Some characters have undergone minor changes, although nearly all of them have received alterations that make them more accessible and fun to engage with. The same can be said for the user interface which continues to receive neat little touches that make the experience easier to enjoy.

In terms of modes, the vanilla quick-play and competitive playlists are now accompanied by an Arcade Mode with variations on Brawls that change all the time. Seasonal Events are held throughout the year which introduce PvE events and a special aesthetic to Overwatch which compliments both gameplay and the unfolding lore. Blizzard has clearly taken Overwatch’s initial lack of variety into account, although its new additions aren’t always up to scratch. Capture The Flag and Elimination highlight that heroes were built for a method of play that suffers outside a specific framework.

Seasonal events and new modes transform the approach to Overwatch – whether it be through celebrating the culture of its cast, or growing closer to the narrative that Blizzard holds in front of us like a carrot on a stick.

Unfortunately, they also highlight the fractured jewel in Overwatch’s crown: its progression system. 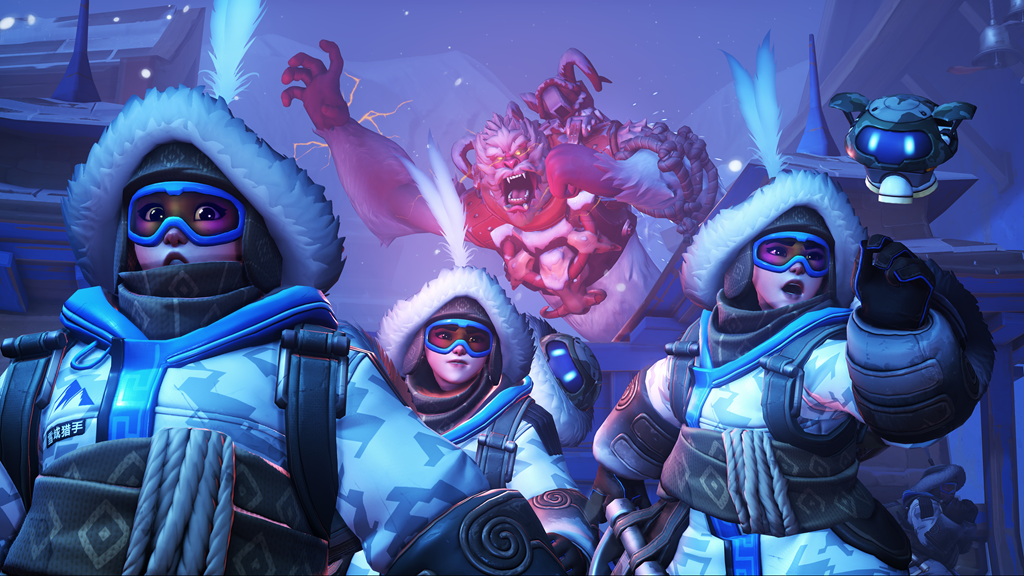 One of the only forms of notable progression in Overwatch is its substantial array of cosmetics. Every hero has several skins, sprays, emotes and lines of dialogue  that can be unlocked and assigned to your liking. These are earned through loot-boxes that are gained each time you level up.

Opening them is rewarding, yet grinding and failing to earn that one special skin is understandably frustrating. This is especially true during seasonal events, where you have only a few weeks to earn whatever tickles your fancy.

Coins are another way to purchase cosmetics, although these are earned so slowly that they’re almost trivial. Loot-boxes are available as in-game purchases if you’re looking for a potential, albeit expensive, shortcut. The sole goal of levelling up in Overwatch is to obtain boxes, which often packed with common items we found meaningless. It can feel predatory and unrewarding at the best of times. Blizzard’s shooter was arguably a catalyst to the systems that plagued Star Wars Battlefront 2 and Middle Earth: Shadow of War although the core difference here is they have no impact on player performance.

Players looking for something a little more serious can invest time in Competitive, a place to cement yourself in global leaderboards while earning points to purchase fabulous golden weapons. Now in its ninth season, this mode is a guaranteed method of injecting matches with an extra layer of tension. Bouts tend to last longer as each team pursues the objective in matches that prove genuinely nail-biting. 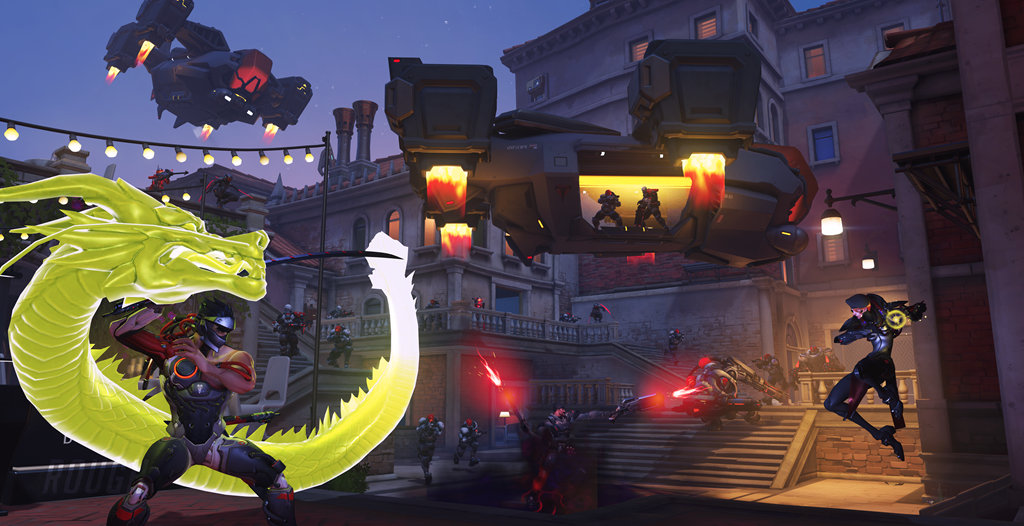 Should I buy Overwatch?

Overwatch remains one of the most compelling and experimental shooters in the world right now. Blizzard Entertainment’s commitment to innovative new heroes, modes and responding to community feedback is unparalleled – and a treat to watch.

Like World of Warcraft, Starcraft and Diablo before it, Blizzard has crafted something that will undoubtedly be around for years to come.