A mixture of lovely characters and a world brimming with imaginative ideas is complemented by a rock-solid combat system and experimental platforming that blend together strangely, but just works. If you're after a smaller adventure in-between the coming month's biggest releases, not much will shine brighter than this gem.

Indivisible is a rare delight, and not just because of its striking character designs and wonderfully charming humour. It sets out to combine two genres you simply wouldn’t expect to gel – precise platformers and RPG action – into an open-ended world I came to adore following only two hours with Ajna and her motley crew of lovable misfits.

Lab Zero Games’ crowdfunded effort is a long-awaited triumph, shining ever so brightly in a year filled with gems. It can stumble at times with its technical competence and unforgiving checkpoint system, but dig beneath these and you’re left with a long, beautifully presented tale I can’t help but recommend.

Ajna’s journey begins in her humble village, a quaint yet homely abode filled with passionate townsfolk going about their business. In typical RPG fashion, everyone is a little too happy for their own good, in a land filled with strange monsters and growing political intrigue. Our heroine makes her way to daily training with her father – a man who harbours many secrets about a past he isn’t willing to indulge in. 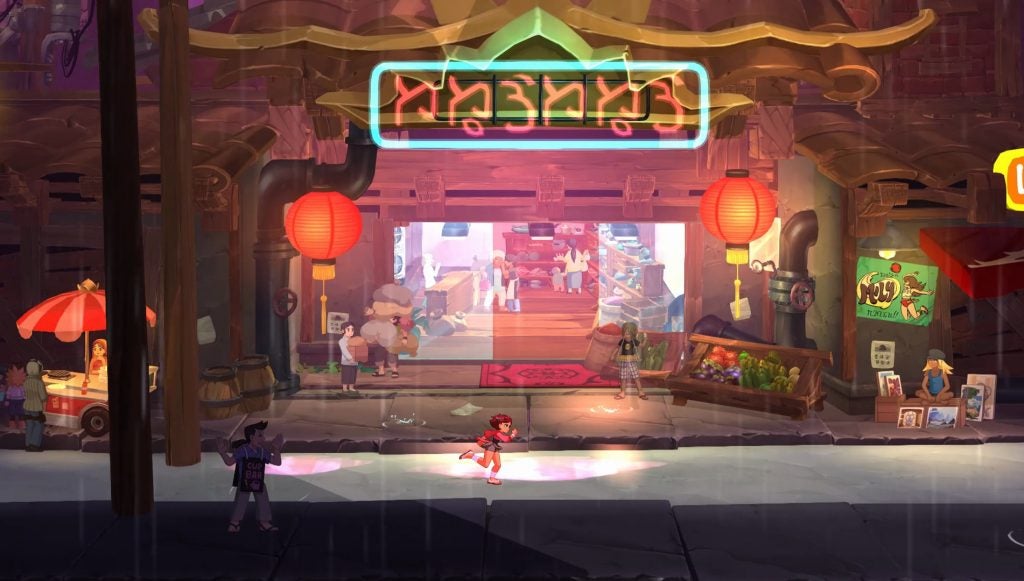 The world of Indivisible is positively gorgeous, awash with influences from numerous cultures

Grey-haired and adorned with scars, his life will become a bigger sticking point in the narrative moving forward. Instead of her usual training session, Ajna snaps and demands answers from her guardian. His dismissive caregiving and the fate of your late mother lead to him storming off, blissfully unaware it’s the last time you’ll ever see each other.

It’s a bittersweet farewell as Ajna returns to the village hoping to apologise, stricken with grief as she discovers her birthplace in flames. With her father’s corpse bloodied and battered before her, you encounter Dhar – lieutenant to Ravannavar, otherwise known as the man responsible for killing your father, and plenty more as you’ll soon discover.

Dhar’s introduction is the first of countless characters I came to love during my time in Indivisible. Each one is exquisitely designed, often adorned in outfits inspired from exactly where they came from in the game’s world. Ajna’s own attire is inspired by Indonesian and Hindu customs, and you’ll gain more outfits with plentiful quirks throughout the campaign.

Razmi is a reclusive, wise-cracking shaman who has an obsession with setting things on fire; a tiger’s fur drapes upon her back like a makeshift hoodie. Kushi, meanwhile, is a small girl wrapped in a winter coat with a giant eagle by her side.

There’s so much variety, with each new encounter proving an imaginative surprise. The excellent battle system takes inspiration from the Valkyrie Profile series, as your party consists of four characters who can be mixed and matched at any time, each with their own distinct abilities. One might excel at stunning enemies before dealing massive damage, while another can shower allies with healing juice in a tight spot.

You’ll even recruit an adorable dog you can pet during battle. It doesn’t do much, but it’s certainly adorable. 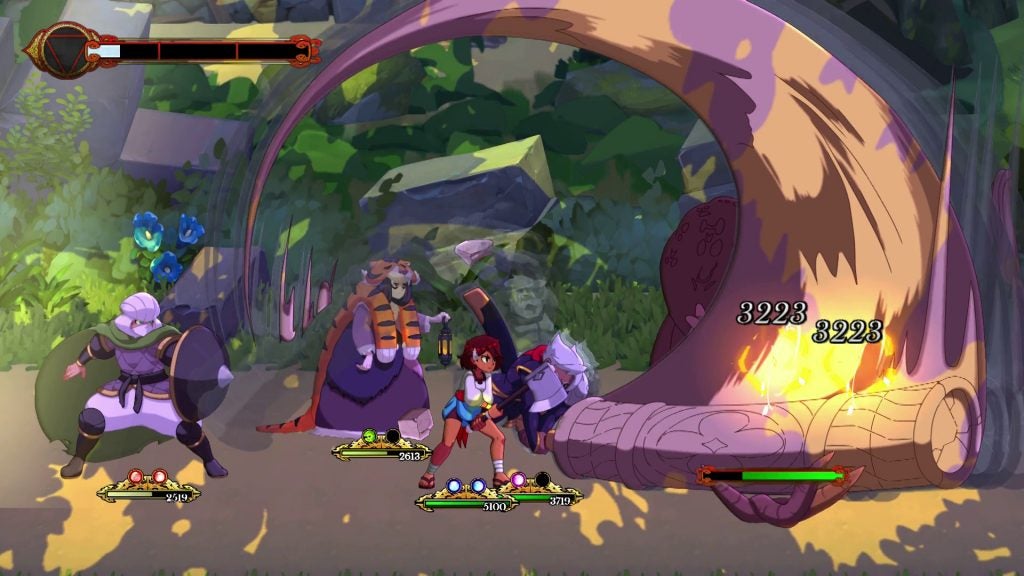 Combat is a challenging, tactical blast, with boss battles blending with platforming in some ingenious ways

The combat system is simplistic in the opening hours, but mechanically dense beneath the button-mashing surface. Each hero in your party is mapped to a face button on the controller. They attack, defend or use abilities according to the direction pressed alongside their respective input.

For melee-driven characters, this will determine the angle of their strike, a tactic required to break the defence of tougher monsters or juggle them into the air. Healers and spellcasters are best left on the backburner, saved from attacks as they cast elemental blasts of fire or precious little bits of healing.

You’re meeting new characters and swapping them into your party constantly, ensuring fighting off baddies seldom grows stale. There’s one exception, however, and that’s when you mess up some of the occasionally finicky platforming and are forced to retrace an area, smashing through the same group of foes over and over again until you get things right.

Beyond these rare sections, exploring the world is a joy. Ajna is a strong, curious teenager, capable of leaping up chasms, sliding under tight spaces, and eagerly observing every new environment she comes across – many of which are gorgeous. You’ll explore dusty desert ruins filled with fragments of history, alongside snowy mountains awash with ancient devices and strange booby traps. 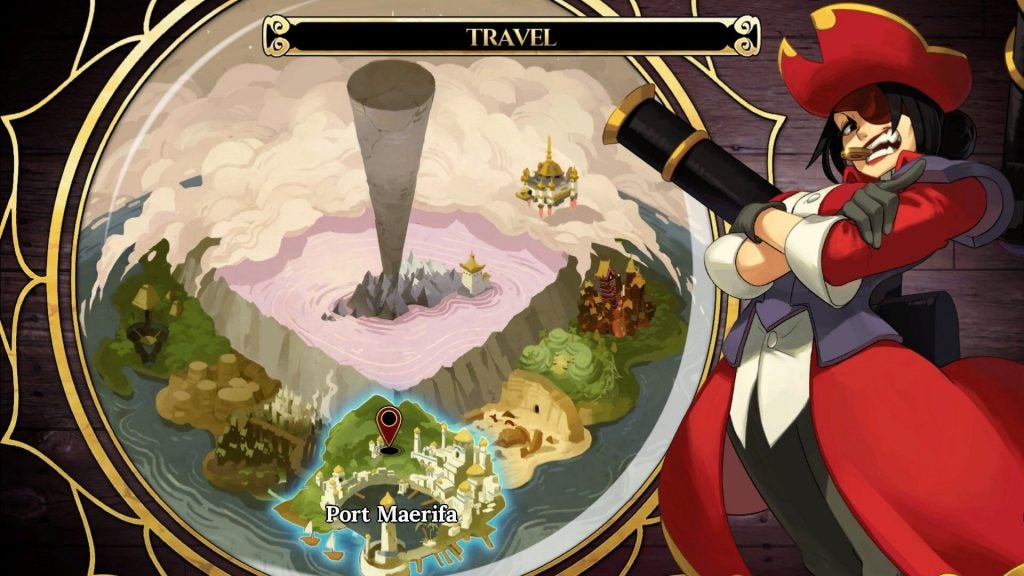 You’ll unlock a world map later into the game, earning the right to revisit old locations for new rewards

Tai Krung City is one of my personal highlights, showcasing how this world inspired by different aspects of Asian culture is filled with fascinating architecture and people simply going about their lives. Lab Zero Games has done a phenomenal job making this place feel alive and kicking, like you’re learning more about it alongside its inhabitants.

I made a conscious effort to uncover every new arena and converse with my friends whenever new dialogue surfaced. Many of them find refuge within Ajna’s mind – and I mean that quite literally. She absorbs them into her “Mind Palace” of sorts, where they stand around befuddled by such obscene circumstances. It’s like your brain is a Pokéball and they’re the rather unfortunate monsters.

Dialogue reflects this whimsy approach to humour, personalities awash with sharp quips and delightful observations. The writing is excellent throughout, although some of the later, more dramatic plot developments would benefit from more substance or additional room to breathe. Revelations come thick and fast, and can feel unusually out of place when compared to the otherwise happy-go-lucky atmosphere. 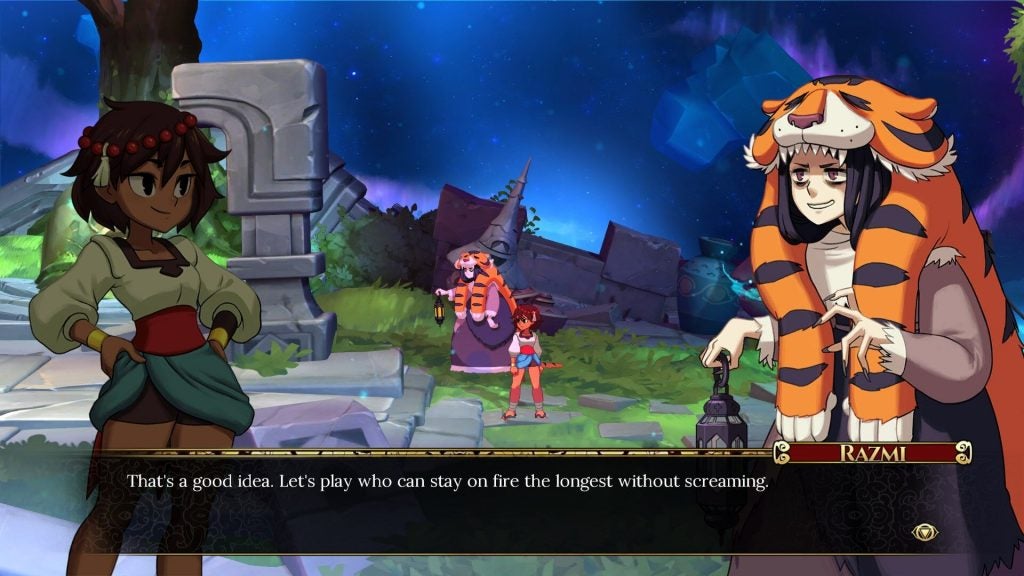 Dialogue and characters are endlessly charming, right until the very end. You’re bound to end up picking favourites

Following four years of development stemming from a successful crowdfunding campaign, Indivisible crashes onto the scene, delivering one of 2019’s most brilliantly imaginative experiences.

Lab Zero Games has crafted a mythos drenched in gorgeous environments and varied characters that all feel rightfully distinct, representing different areas of Southeast Asian culture in a way the medium simply hasn’t before.

Its mixture of lovely characters and a world brimming with imaginative ideas is complemented by a rock-solid combat system and experimental platforming that blend together strangely – but in the end it all just works.

If you’re after a smaller adventure in-between the coming month’s biggest releases, not much will shine brighter than this gem.