Diablo 4 has been on the wishlist of gamers for years, with the highest hopes that Blizzard Entertainment would return to its roots and create something truly breathtaking. Now it’s been revealed, it seems that the iconic studio is definitely on the right track.

The announcement was made with a 9-minute cinematic trailer alongside a glimpse at gameplay which appears to run on an updated engine, although maintains many of the motifs fans have come to expect from the series. It’s dark, bloody and brilliant – exactly what we were hoping for.

We’ve compiled everything you need to know about Diablo 4 including all the latest news, release date, trailers, gameplay and more.

When is the Diablo 4 release date?

No release date has been confirmed for Diablo 4, although we do know it’s currently in development for PS4, Xbox One and PC. A playable demo was available to attendees of BlizzCon 2019, so knowing this we’re crossing our fingers for some form of release in 2020. Perhaps we’ll see a next-gen version, too?

Diablo 4 trailer – how does it look?

You can check out the trailer for yourself below. Be warned, it’s surprisingly violent and not for the faint-hearted, ending with a particularly gruesome creature making her appearance:

Diablo 4 is very much going back to its roots in terms of art style, abandoning the somewhat cartoonish aesthetic of the third instalment for a more gritty, grounded style reminiscent of gothic fantasy. It’s also especially gruesome, so be prepared for that. Oh, and there’s also a gameplay trailer:

Diablo 4 gameplay – how does it play?

Diablo 4 is engineered to appeal to both casual and hardcore fans alike, crafted as experience that remains true to its roots while forging a confident path forward. This much is obvious in its visuals. Dark, gothic and bloody in a way its predecessor simply wasn’t, keen to set itself apart from what came before. Blizzard has announced a handful of playable classes for Diablo 4 thus far in the form of Sorceress, Barbarian and Druid.

The Druid is capable of conjuring animal allies to fight by his side, or make natural formations such as storms and tornadoes appear to keep enemies at bay. He’ll be a devastating force whether you’re playing offensively or defensively. The Barbarian is somewhat more simplistic, designed around brawn and the use of weapons more than fancy spells. He’ll be on the frontlines, hacking monsters to pieces with an axe the moment they’re spotted. Lastly, The Sorceress employs three disciplines of magic which are Fire, Lightning and Frost. 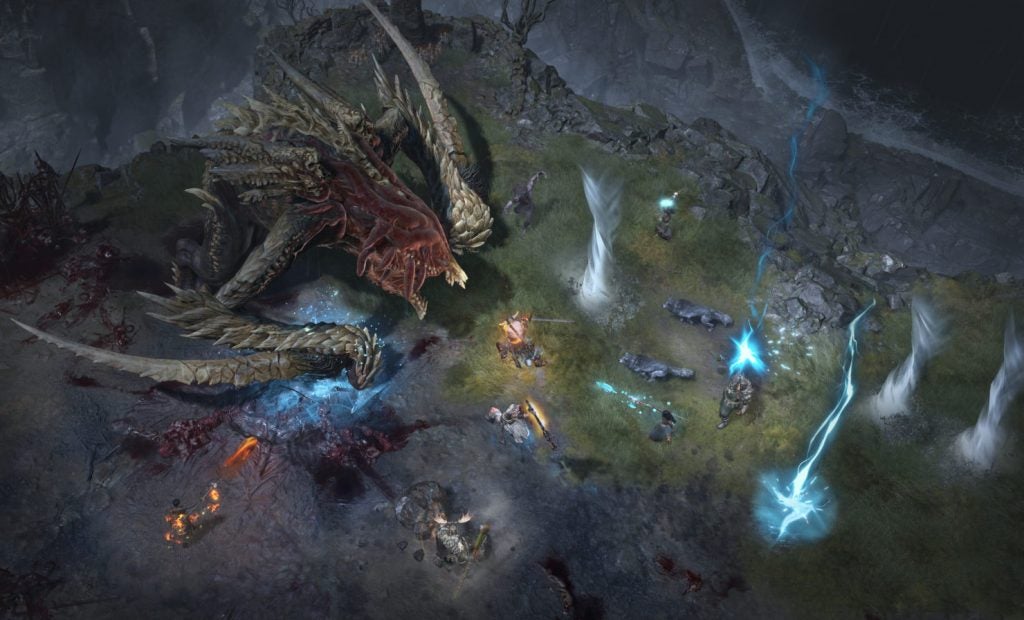 If you’re an offline player we’ve got some bad news – Diablo 4 will require an internet connection to be played. This is due to a shared, MMO-esque world players will inhabit. Knowing this, it’s likely you’ll stumble across other adventurers on your journey in search of loot and dungeons to explore. This sounds like a great idea, but the lack of offline play is a bit of a shame. Dungeons will be instanced, as will zones where players can participate in combat against one another.

Player population across each zone will differ depending on the existence of wild zones, cities and other locations. You’ll be able to fast travel, walk, run or travel by mount, the latter of which are fully customisable. Obviously, your character can be altered with plentiful types of loot and other equipment. After a few hours you’ll have likely crafted a distinct identity in the world of Diablo 4 nobody else can replicate. Plenty is yet to be revealed about Blizzard’s latest project, though.

What is the Diablo 4 story about?

Taking place after the events of previous games, the eradication of angels and demons across the realm has provided an opening for new evil to make its mark. This comes in the form of Lillith, Daughter of Mephito and Queen of the Succubi. She’ll act as the series’ primary antagonist, and makes a spectacular impact in the debut cinematic trailer.