We need a name for this weird indie sub-genre. I’m talking Rime, Bound, Beyond Eyes, ABZU, Journey. Games of beautiful, abstract visuals and controlled colour palettes, with gentle puzzle-solving, easy-going action and soaring orchestral scores. They’ve become to their nearest conventional game cousins – the action adventure – what so-called walking simulators are to FPS games, but I wouldn’t want to give that cheap label to them. All these titles are shooting to deliver a strong emotional experience. Should we call them arthouse adventures? Journey-likes? Nothing seems to quite hit the mark. Now here’s another one: Oure.

Oure is the game Sony launched by surprise in its Paris Games Week conference. It’s the latest project from Heavy Spectrum Entertainment Labs, the UK team behind last year’s remake of Shadow of the Beast, and it’s firmly in the Journey/ABZU mould. 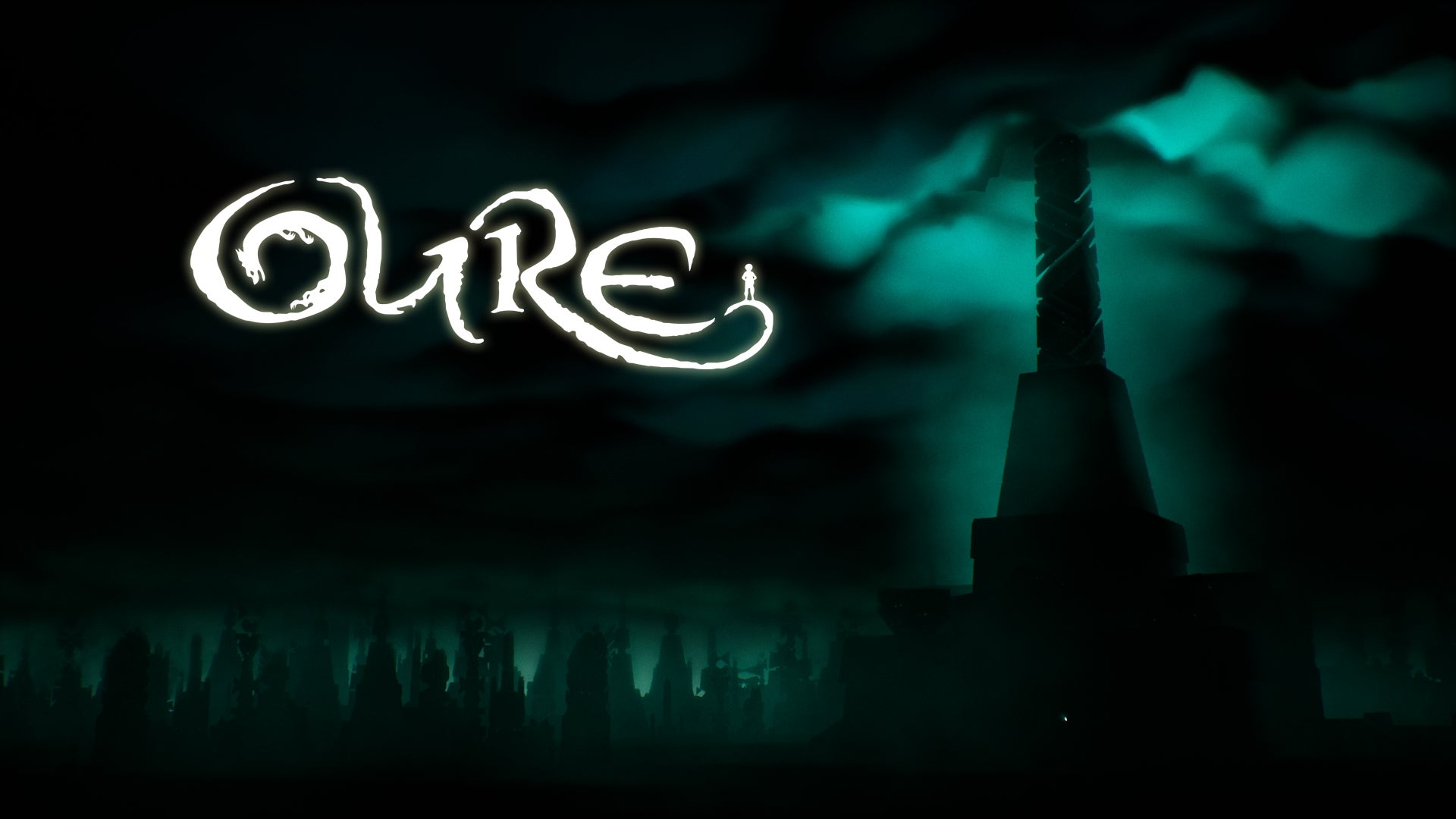 It’s the tale of a girl in a dark, ravaged city who dreams of flying through the clouds into the blue skies above. Her parents take her to a tower with a strange, glowing door, where – effectively – her dreams come true. Our heroine becomes a kind of Chinese dragon, flying over enormous cloudy landscapes, charged with bringing back the Titans that once protected the city. The hope is that their return will clear the oppressive gloom and bring life back to the world below.

Oure wants you to discover things for yourself. Following a brief tutorial you’re left to get on with flying around, heading upwards and downwards with squeezes of the triggers, boosting with X or tapping the square to go into a tight circle. This creates a wave of mystic energy that ripples out to reveal objectives in the world. 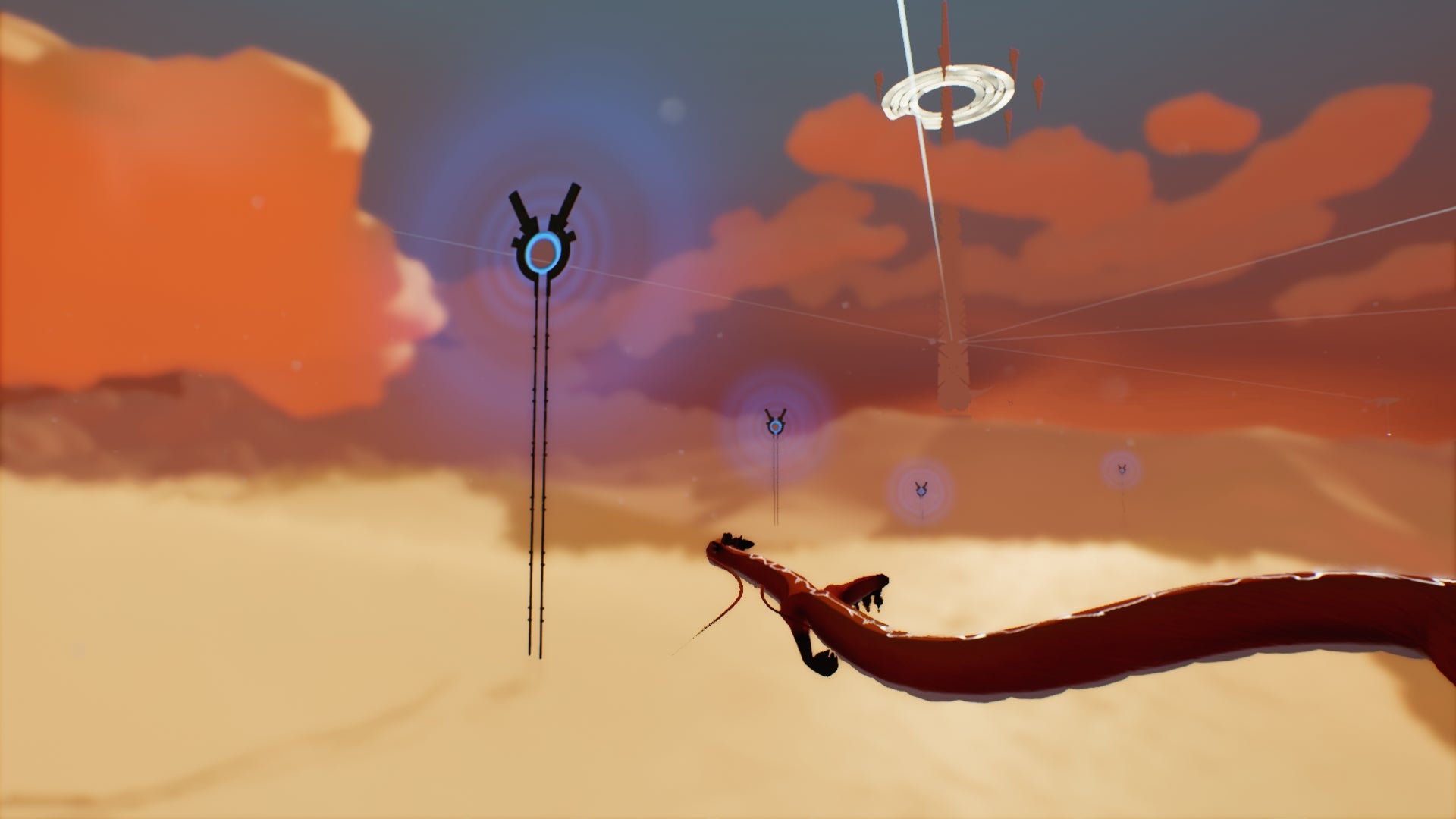 At first, your main task seems to be collecting glowing blue orbs, although there are runs of strange monuments with gates that tempt you to race through. Flight feels great; your dragon’s long sinuous movements playing in to flowing chains of swooping dives, high-speed climbs and graceful turns.

And even though the environment isn’t particularly memorable – all cloud formations, tunnels and clusters of floating ruins – it’s beautifully lit and coloured. It’s fun enough to just get out there and explore, and you’ll soon find mysteries to puzzle over and plenty to interact with.

Before long, however, you’ll discover your primary mission: energising pylons that summon the Titans, then doing whatever is needed to fix them and get them back to work. It’s at this point that it hits you that while Oure’s visual touchstone is Journey, its gameplay has more in common with the mighty Shadow of the Colossus. While the open-world exploration and collection helps bind things together, the real focus is on your encounters with the Titans, each effectively a non-violent boss battle with puzzle elements.

These are spectacular, as you speed your dragon across each Titan’s monolithic form as it twists, turns, boosts and dives through the air. You might be racing around a giant starfish, a soaring phoenix-like creature, or an undulating caterpillar, but in every case the puzzles come in two forms. Your primary task is to grab onto a series of crystal pillars then complete a little point-to-point puzzle – a bit like something from The Witness. Complete the puzzle and the crystal breaks in a puff of smoke. You’re one step closer to a Titan back in action. 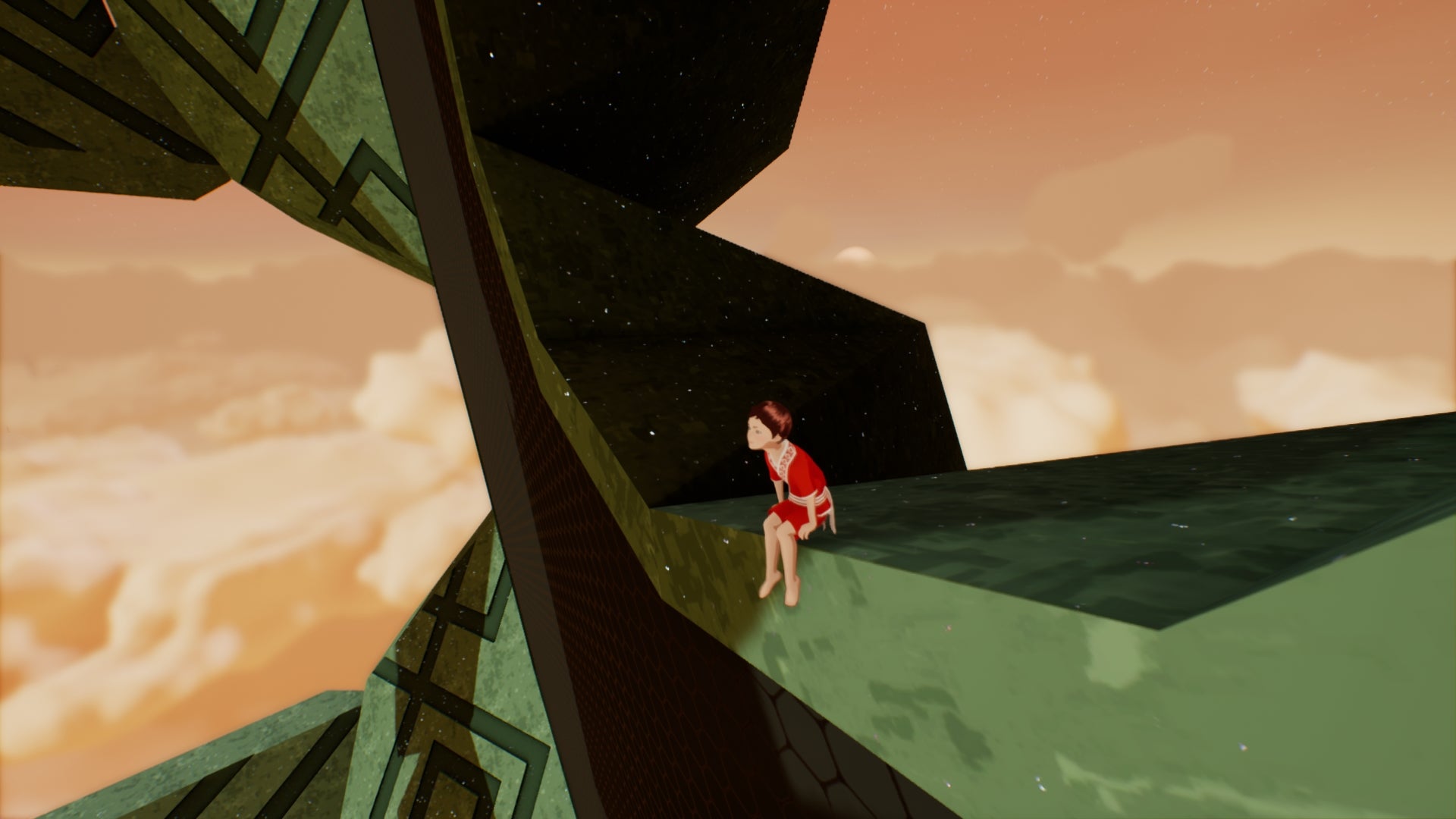 These puzzles aren’t actually as tricky as they look, but the more challenging puzzle is how you get to all those pillars in the first place. Every Titan has its own cheap tricks to keep you reaching your objectives, whether sudden bursts of speed, burning jets and hostile airflows or elements that only become visible when the Titan – or part of – turns over. Once you know the trick and how to counter it, you need only a modicum of skill to fix the Titan – but that’s a process of discovery in itself.

It all makes for a beautiful and often oddly relaxing adventure, which you can work through in six or seven hours. And if you like the ambience? Just take a little longer. Hold off the Titans and track down the bonus collectibles and challenges. There’s a New Game Plus option when it’s over, with slightly harder puzzles, while a handy grid tells you what you’ve missed. All said, though, I’m not sure Oure is a game I’ll keep coming back to. It doesn’t quite hit the heights of Rime or Journey. In fact, I’m not sure it’s even in the ABZU class.

Some of my reasons are pretty subjective. Personally, I didn’t find the story all that enthralling, and I rarely felt the highs and lows that Oure’s creators intended me to feel. Where Journey, Rime and ABZU spend time setting up the mood and tone for each new sequence or challenge, Oure’s work seems rushed, repetitive and strangely flat.

One thing I did feel was that Heavy Spectrum has overdone the depth-of-field blur, to the extent that the camera seems oddly myopic, unable to focus on anything beyond the nearest objects. At best it’s a distraction; at worst, it’s an impediment to seeing where you need to go next. 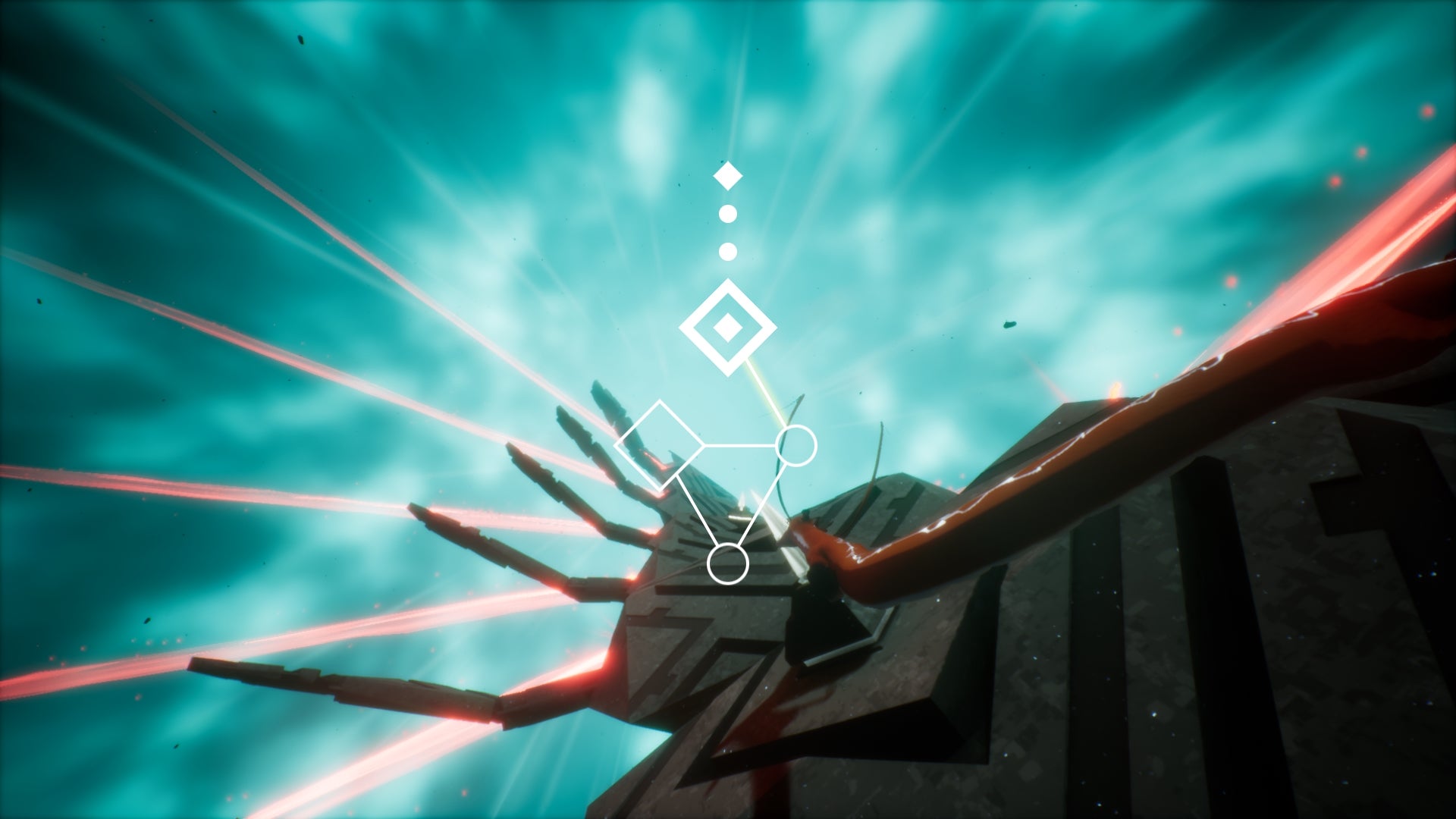 On the plus side, Oure never falls foul of my biggest complaint about ABZU and Bound – the lack of any real player agency or meaningful things to do. But there are other aspects of the game that are more annoying. For one thing, your dragon doesn’t have the tightest turning circle, so putting in threats or obstacles that require precision manoeuvring might not have been the best idea.

For another, the camera is borderline disastrous at times, and nearly always when precise manoeuvring is required. Having to latch on to a column when you can’t actually see it, waiting for the grab prompt, isn’t brilliant. The same is true when trying to turn quickly around a barrier while the camera is doing its best to shift in the opposite direction.

These things didn’t wreck Oure’s pleasures for me, but they meant I spent too much time wrangling with mechanics when I could have been soaking in the experience. And that’s a shame – its style might owe a lot to ABZU and Journey, but it has a flow and a beauty of its own. If I come away a little disappointed, it’s only because there’s potential for Oure to be so much more.

Verdict
Like ABZU, Oure wants to be your next Journey, but Heavy Spectrum’s work falls short of the mark. It’s often beautiful, graceful and intriguing, with more in the way of gameplay than ABZU or Bound, but it struggles to deliver moments that resonate with wonder, while the demands sometimes go beyond what the controls and camera can handle. It’s hard enough to make a game with the artistry of Rime or Journey, but Oure hasn’t got the polish, heart or soul.