Available on PS4 (version tested), PC
Until thatgamecompany delivers a real follow-up to Journey, ABZÛ could be the next best thing. Developed by Giant Squid, a studio founded by Journey’s art director, Matt Nava, it echoes Journey not just in its looks but in its minimalist gameplay style and multi-act structure. It uses the same composer, Austin Wintory, and feels a lot like Journey, or at least an underwater equivalent. None of this means that ABZÛ is Journey’s equal, but it tries for many of the same ambitious targets and sometimes hits them. What’s more, it’s no clone. For all the similarities, it also has its own ideas.

Like Journey, ABZÛ likes to be all mysterious. Your mute protagonist is a black-and-gold-clad diver with the ability to breathe underwater without any special apparatus. You begin floating in a tropical ocean, where you’re free to explore a series of areas, activating weird fish-spawning zones with a tap of a button, your mainstay for environmental interactions. You can also make nice with the local fauna, even grabbing them with a squeeze of the left-trigger to catch a lift. Divided into discrete sections and chambers, it’s not a wide-open sandbox in the vein of Endless Ocean, but instead one location leads to another, drawing you deeper into the sea – and the game. 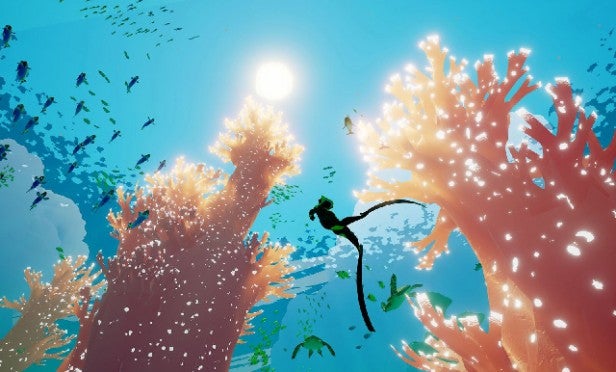 At first your objectives seem obscure, even empty. The underwater environments are convincing and beautifully lit, rendering both the scenery and fish without much surface detail, but with a real eye for shape and motion. The way fish move, flock and respond to your movements is utterly believable. The controls do a great job of capturing the feel of moving and turning gracefully through water, and while the camera isn’t always all that helpful, the game does a fine job of taking control of it, either to point you in the right direction or create an effect. You can swim around and play with the fish, find a small underwater drone and use it to demolish net-like barriers. But is that really all there is?

Not quite. Before long, you encounter your first sunken ancient ruins, the blue and gold walls bearing large-scale murals that seem to have something to do with the diver. You’ll encounter a shark – is it friend or enemy? – and discover statues where you can chill out and meditate, with the camera switching to following the fish, flicking from one shoal to another with a twitch of the left stick. 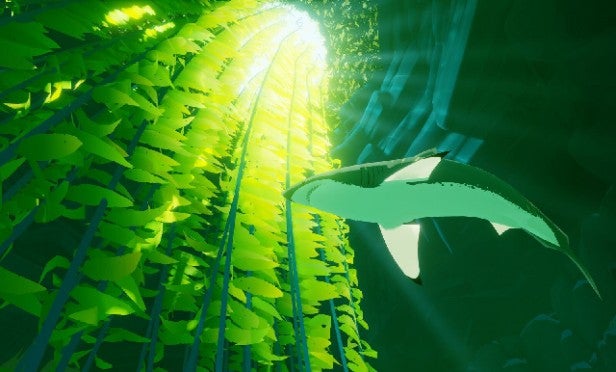 And it’s around this point that ABZÛ’s structure becomes apparent. It’s divided into acts, each one consisting of a journey through a different underwater environment, pushing you to explore, putting you through some task or challenge, then ending with a trip through a whirlpool portal to a strange, luminous shrine. No act drags or outstays its welcome. The action sequences can be exciting without ever becoming challenging, and what puzzles there are won’t hold you back for long. The emphasis is always on discovery and interaction with your fellow creatures. This isn’t a tough, demanding action game or even much of a mental challenge. Instead, there’s something quiet and meditative about much of ABZÛ, as if it’s taking you on some kind of inner journey.

That doesn’t mean it’s quiet and unassuming. Despite its deliberately abstract scenery and often carefully restricted palette, ABZÛ knows how to dish out huge moments of wonder, filling the screen with massive shoals of tiny fish, dragging you through vast, inhuman architecture, pulling you further down into the depths where the weirdest, most alien fish live. At times it feels like a series of dreamscapes, as you swim with whales or through coral reefs that suddenly overwhelm with a riot of colour. And that’s before the game goes sci-fi on you, switching from The Blue Planet to 2001: A Space Odyssey and back again in a way that feels organic, part of the tale. 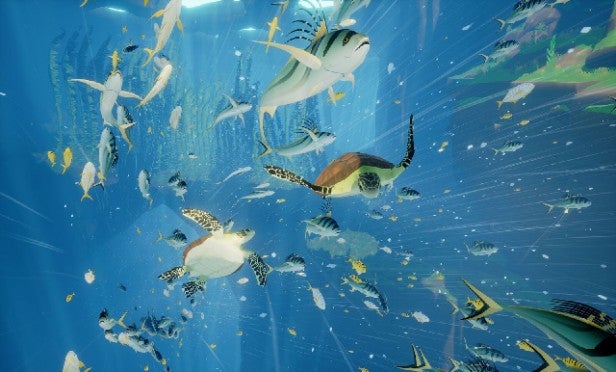 The biggest moments are complemented by a powerful orchestral score, heavy on the harp and choir when it’s time to go for gob-smacked awe. At times, ABZÛ overplays its hand, practically battering your senses in its drive to amaze, astonish and enthral, but when it hits the mark it can be powerful, producing some of the most extraordinary scenes of the gaming year.

I don’t want to spoil what these are or what the storyline is really all about, but it’s safe to say that there’s more to ABZÛ than immediately meets the eye. In fact, reconstructing the underlying myth becomes part of the game, as you scour the scenery for clues. This makes ABZÛ something of a slow-build game, but it develops momentum well and ends in a really compelling final act. 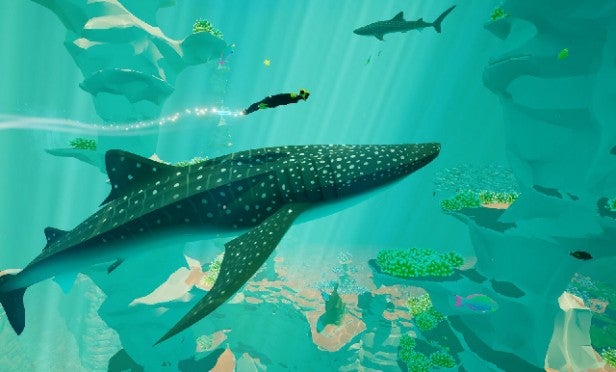 I like and admire ABZÛ – it’s hard not to be wowed by it – but for me it can’t quite reach the standard set by Journey. Firstly, the actual gameplay’s not that satisfying. Where Journey threw different mechanics, ideas and emotions into every act, ABZÛ only brings in a few basic problems, none of them that tricky, and expects you to solve them in just a handful of ways. It’s really more of a big, highly orchestrated experience than a game, and your interactions with your fellow creatures and the environment aren’t as deep nor varied as you might expect.

More seriously for me, it doesn’t have Journey’s heart. While Journey’s story was just as abstract and open to interpretation, it had a warmth and personality that escapes Giant Squid’s game. It had that brilliant, anonymous, multiplayer dynamic – where each area matched you with a different co-op player – but there was also something about Journey’s character design and animation, not to mention the discoveries you made and the challenges you faced. Where Journey grabbed my emotions, ABZÛ grasped at them sporadically. It’s a hugely impressive game – a real sensory feast – but no revelation. 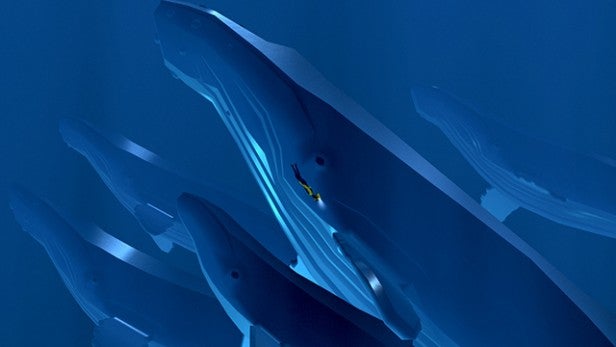 Like Journey, it’s also short. I clocked it in around two hours without too much rushing, and while I spent more time on a second playthrough, we’re not talking much more. Your own mileage will vary depending on how much time you spend meditating and how carefully you search for all the different sea creatures you can unlock – some of which are long extinct. In fact, there’s a certain amount of replay value in just reaching a 100% completion and enjoying the undersea world. Even the Meditation stuff, accessible without playing the game on completion, is a nice way to chill out and see some clever virtual fish in motion. Yet where Journey kept you coming back because pairing with different online players could transform the whole experience, ABZÛ is pretty much the same experience every time.

And this is where a definitive verdict gets tricky. The real value in a game like ABZÛ isn’t in the graphics or the game mechanics, but in how you connect as an individual with the game. For some, it’s going to be a powerful experience, for others, a visually stunning one, but ultimately unsatisfying. For me, it’s an experience with moments of real power, but one that can’t reach the pinnacles climbed by Journey, even while it finds such vibrant spectacle in the ocean’s depths.

ABZÛ is a visually stunning arthouse game with a fantastic score and some awe-inspiring, powerful moments, but it’s one that can’t match the achievements of its nearest relative, Journey. The gameplay’s never as compelling as the visuals, and while its undersea kingdom is a fascinating place to visit, the story doesn’t quite have the same heart. Stick it on a big screen, put on some headphones and you’ll be blown away, but will you keep coming back? I’m not so sure.