In our original review of RiME (which you can read below this one), we described it as a potential masterpiece. Unfortunately, for players picking it up on the Switch, it will be incredibly hard to see why. This is an incredibly shoddy port. From horrendous frame rates to poor visuals that look even worse when you take the console on the go, this isn’t the release that such a game deserved.

While our original review talks much about the game and its mechanics, I’d like to focus on how the game has transitioned onto Nintendo’s platform, or – more specifically – how poorly it has done so.

I started playing the game in the dock, and immediately the signs were troubling. I was initially greeted by a long load screen, before an opening cut-scene stumbled its way to its conclusion, thanks to an incredibly choppy frame rate. After getting control of the lead character, things became worse. 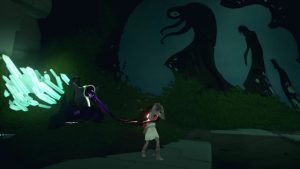 At any time other than simply wandering around an open space, the game desperately struggles to keep up. The frame rate is so poor that the experience becomes pretty much unplayable at times, with control being stripped from my hands and returned only once the game pulls itself together and catches up with whichever frames it failed to load in the first place.

Running around what is effectively a gorgeous terrain becomes tricky when stutters and judders mean you’re almost forced to lead the little boy and anticipate where he’ll be, as the choppy performance conveys an awful sense of input lag. The aggressive texture doesn’t help much, either.

Then come the visuals. RiME is a visually striking title on PS4, Xbox One and PC, but on the Switch its beautiful colours and detail fade into a smudge. In the dock, the little boy looks weirdly blurry in motion, suffering from terrible aliasing with any movement. It so bad that at times it looks similar to those snippets you see where people’s faces have been deliberately blurred in order to protect their identity. Cut-scenes are the only segments in which the boy looks normal.

In portable mode the game looks significantly worse. Background scenery is so blurry that I found myself having to squint in the hope things would become clearer; but, of course, it didn’t. When there are games as gorgeous as Breath of the Wild and Super Mario Odyssey running on this device, there’s absolutely no reason that this title should suffer such a deterioration in quality.

This isn’t the Nintendo Switch port both RiME and consumers deserve. It feels like a shoddy downgrade from a console to a significantly inferior portable from a bygone era.

With that in mind I’d recommend that, unless patched to significantly improve matters, you avoid buying RiME on the Switch. Buy it on another platform instead.

RiME wears its influences heavily, even proudly. Fumito Ueda’s work on Shadow of the Colossus and Ico – particularly Ico – is the dominant one, but it isn’t difficult to see elements of The Legend of Zelda, especially The Wind Waker, or Journey, in there as well. I can lavish no higher praise on it, then, that it isn’t just more than the sum of its influences but a game that can sit alongside them.

Nor is this the end of RiME’s achievements. In the wake of Journey, we’ve had a series of arthouse games distinguished by their visual style and almost abstract narratives, but where the gameplay felt hollow and the tale never quite connected. ABZU, Beyond Eyes and Bound spring to mind almost immediately – but they’re not the only ones. RiME does better, by not only delivering engaging gameplay but making it feel an inextricable part of the story. It isn’t some kind of high-falutin’ interactive experience, but a beautifully crafted game.

It’s an enigmatic tale but also a simple one. A boy finds himself washed up on the beach of a mysterious island, populated only by animals, but housing numerous ruined structures: temples, statues, fountains, towers and – at the centre of it all – an enormous white tower that fills the sky. The boy can run, jump, climb and grab on to ledges, just like any platform hero, but his voice seems to have some power in this strange world, summoning mystic energies that activate mechanisms or open seemingly blocked-up gates and doors. 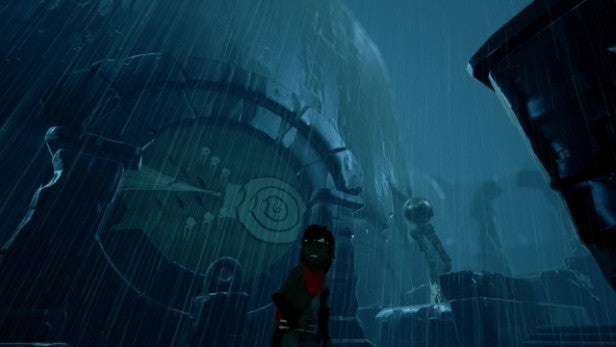 At first our young hero explores the landscape, solving simple puzzles and experimenting with the island’s mechanics. There are other things to ponder, too, like a barking fox that serves as a guide on his journey; or the half-glimpsed red-hooded figure who’s forever out of reach; or the statues, murals and emblems that seem to mean something beyond your grasp. Before long, he discovers that the island is only part of a wider universe, with different areas – maybe aspects or reflections of the same island – all linked by that central tower.

To be honest, I don’t want to tell you anything more than that because so much of the experience of playing RiME is bound up with what you discover and when and how you discover it. Even once completed, there will be areas of ambiguity and events and characters where the meaning isn’t clear. In this sense, it’s very much like Ico or Journey. Perhaps, what it’s about isn’t quite as important as how it makes you feel.

On this front it’s propelled by its beautiful visuals, which marry the cartoon, cel-shaded look of The Wind Waker or Journey with a whole range of advanced lighting techniques and some dazzling water, blur and particle effects. The art style is cleaner than that of Team Ico’s games, lacking the heavy stonework and the gothic and tribal flourishes, but there’s something about its use of repeated motifs and volumetric lighting that hits the same buttons. RiME’s world seems hewn from ancient myth, only not some ancient myth of which you’re already aware. 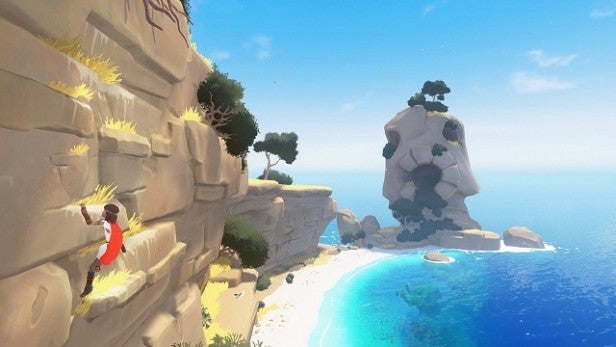 It’s a cinematic game, but not in the sense that it’s barely interactive, but in that everything is so carefully paced, structured and composed. It makes fantastic use of audio, both for vital sound cues and a lush, emotive score, and where some of the other games we’ve mentioned seem to have used this as a substitute for effective storytelling, RiME uses it in a way that enhances the drama and the gameplay. This really isn’t as easy as Journey and Ico have made it look.

Still, none of this would matter if the gameplay was flat or unengaging – but, luckily, it isn’t. The platforming is rather in the Tomb Raider/Uncharted school, where your routes are clearly marked and it’s more a case of spotting them than any great test of reflexes, but there’s a great sense of exploration, plus tension and relief, as you scale the most vertiginous heights – something else it’s learnt from Ico. RiME even handles underwater action well, giving you enough stress to make you feel the boy’s lungs straining, but never so much that the game becomes frustrating.

The puzzling, meanwhile, is absolutely brilliant. Sometimes it’s just a question of logic, understanding how to trigger several statues at once, or manipulate a mechanism to get the desired result. At other times it’s all about using light and shadow, making the most of the environment, or exploring an alternate path to get you where you need to go. Throughout there’s a sense that, as in a great Zelda dungeon or Jonathan Blow’s The Witness, the game isn’t telling you how to do things but slowly teaching you how to think the way the game wants you to think. 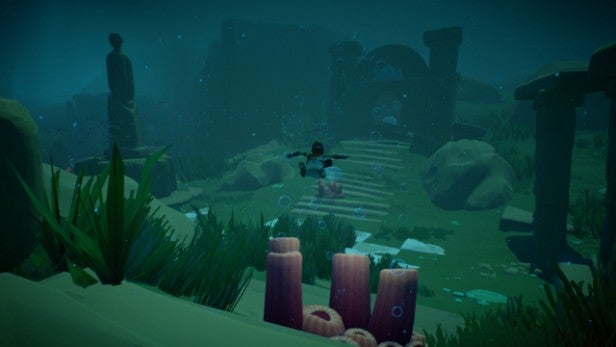 If RiME has a weakness, it’s that it never expects all that much from you. The puzzles are challenging enough to keep you busy, but there’s never the kind of ‘wow’ moment you get in, say, The Last Guardian or The Witness, where something that’s been perplexing you for half an hour suddenly becomes clear. There’s menace and even death to be found in the game, but nothing that will ever set you back more than a few seconds. There are plenty of ‘wow’ moments in terms of the visual spectacle and the storytelling, but if you’re looking for a serious brain workout, RiME falls ever-so-slightly flat.

As failings go, this is fairly minor, and I’d rather see everyone get through RiME’s powerful story and experience all that it has to offer than see it spoiled by frustrating puzzles or – as was the case with The Last Guardian – by hours wrestling with inconsistent game mechanics. While RiME never throws up anything as near-miraculous as The Last Guardian’s Trico, it’s telling that when it slips into similar territory, it feels on surer ground.

I should also note that I encountered the odd judder when playing in 4K on the PS4 Pro, but nothing major or in any way annoying.

Kudos to the team at Tequila Works. With its third effort the Deadlight developer has created a game of immense beauty, mystery and wonder. And while it’s a relatively short, single-player-only experience – taking roughly eight to ten hours to complete – there’s replay value both in the existence of hidden collectibles that matter to the story and in the desire to play it again once you know how it all plays out. I, for one, will be going back in for a second dip.

While it’s reminiscent of Journey, The Wind Waker and Ico, RiME is so much more than a grab-bag of borrowed ideas. Combining art, craftsmanship, enigmatic storytelling and engaging gameplay, it does what the likes of Bound and ABZU couldn’t: wrap a powerful experience inside a compelling game. I’m still working out whether RiME is a masterpiece and, if so, where it sits in the pantheon of greats – but one thing’s for sure: if you love the games it’s inspired by, you’re going to love RiME as well.