Available on PS3
Two things make Journey hard to talk about. Firstly, it’s an astonishing game, but astonishing in a way that’s hard to describe. We can try and cover how you play it, what you do, what it looks like and all that kind of thing, but somehow it all seems a bit prosaic in comparison to the experience of actually playing it. There’s a famous dictum that writing about music is like dancing about architecture, and we feel a bit like that about Journey. 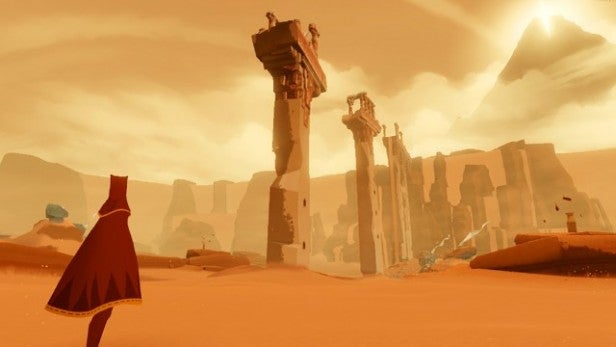 Secondly, it’s a game you should enjoy while knowing as little about it as humanly possible. In fact, we would urge you to put down your tablet, close up your laptop and shut down your PC, fire up your PS3, go to the PSN store, purchase the game, download it and then come back for a nice chat about how good it is in the comments thread (unless for some unfathomable reason you don’t like it, that is).

Still, if you want to read a review beforehand, here it is. Journey comes to us from Thatgamecompany, the small developer that gave us Cloud, Flow and Flower, the last two of which have appeared on PS3. With each game the developer has been growing more ambitious, and while Journey is a short game, at roughly ninety minutes to two hours in length, it feels like an epic. You begin as a robed figure – let’s call them the pilgrim – seemingly lost in a vast desert, with the only visible objective a large mountain in the distance. 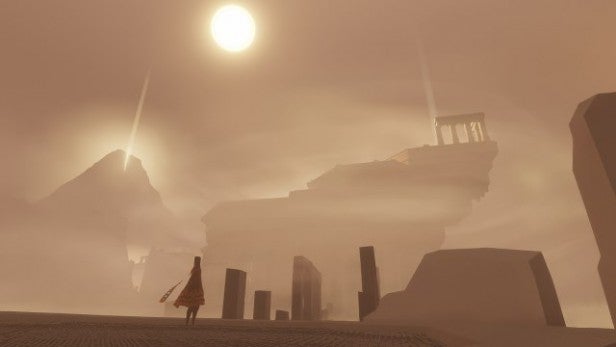 This mountain is your goal, and all you really do in Journey is make your way towards it. There are elements of platforming in the scenery you travel through, with ancient ruins and abandoned cities, and in the way that you can fly for brief periods, activate ancient mechanisms and use structures to protect yourself from adversity. However, it’s hard to say that Journey is a platformer in the classic sense. If we were pushed, we might say that it’s a bit like Shadow of the Colossus without the Collosi, or like a weird, ambient take on The Legend of Zelda. Neither explanation really does it justice.

To really get to grips with the experience, we have to start using words like ‘mysterious’, ‘opaque’ and ‘enigmatic’. Journey doesn’t really explain anything beyond the most basic controls. What plot there is is explained in minimalist, ancient-looking tableaux, and the characters and locations are deliberately unnamed. You can work out the game mechanics and how visual indicators relate to matters of gameplay, but nothing is ever forced down your throat. Everything is simply what it is. 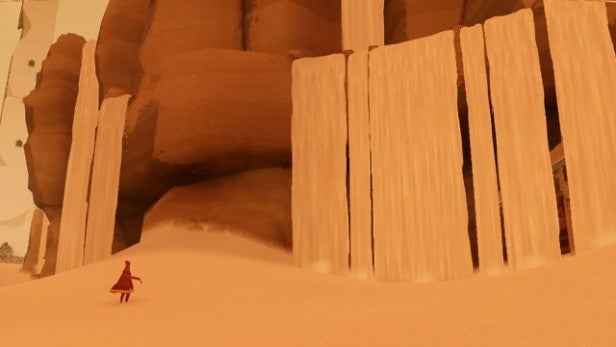 Yet the game feels personal and strikingly cinematic. As a camera pulls back to show magnificent architecture or draws in on the pilgrim’s slender robed frame, and the game’s beautiful sweeping score kicks into high gear, it’s a surprisingly emotional experience. During one playthrough of Journey you might experience uncertainty, wonder, joy, fear, awe and hope, and it’s all down to the game’s masterful use of scenery, framing, light, colour and music. Journey is an extraordinary game.

But we’re still leaving our something quite important: Journey is an experience you share. In each section of the game you may be joined by another pilgrim. You won’t know who they are, their age, their nationality or their gender. There is no talking, just a signal that’s half ball of light, half musical motif, and all you can see is how they behave. Some of your fellow pilgrims will ignore you, some will help you, and some might do all the hard work before you get a chance to. You in your turn can interact with them, leading them to things they might not have discovered, while at specific points in the game there are key benefits to working together. 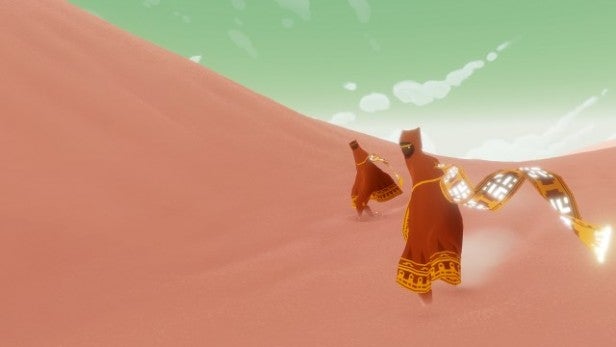 The thing is that each of these other pilgrims is a real player, sat somewhere playing Journey elsewhere in the world. Somehow, you’re sharing something with someone you know nothing at all about, and the experience can be fun, sometimes irritating but often quite wonderful. It gives a game that’s already infused with personality an element of real human warmth.

Normally when we score a game ten out of ten we have to include some caveat, saying that no game is absolutely perfect and that there are some irritating minor niggles if you look. In this case, we’re not going to do that. Journey might not be entirely faultless, but it’s near-perfect at being what it is. 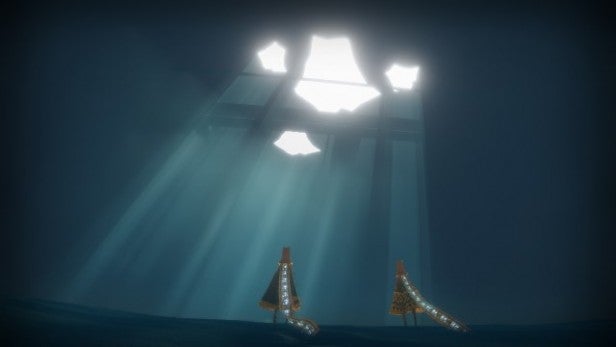 There are two possible causes for complaint. One is that it’s not the kind of game that celebrates skill. Journey doesn’t want to kill you or stop you from making progress, and the only real question is how long it’s going to take. There are bits you might want to explore and some bonuses you might want to pick up, but it’s not the kind of game where you can say one player will be massively better than another. Somehow, to try and speed-rush through it would be to miss the point.

Is this really a problem? No. If you want to prove your gaming chops, try Dark Souls, try Modern Warfare 3 Spec Ops. Journey is all about the journey, not achieving goals.

The second possible issue is length, which we gamers sometimes get caught up on because we like to feel we’re getting value for money, and because we’d like a great game to never end. But should we really weigh greatness by the hour? Or by the ratio of hours to price? Journey is a reasonable £9.99 and you will want to play through it more than once. You’ll also want to get other people on your PS3 and make them play it too. Otherwise, how can you make them understand? 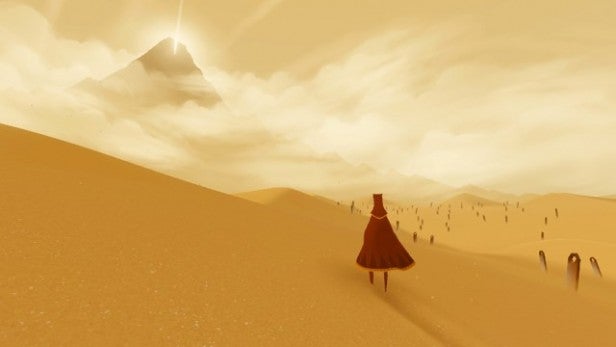 The important thing is that Journey feels like it’s the length it needs to be. It works best like a movie, played in one sitting and allowed to build. In a world where too many games are like long-haul TV series that dip and meander in a mid-season slump before they run up to the end, this is something we really ought to treasure.

Verdict
Journey is a masterpiece. It’s a short-lived experience, but totally captivating, and one you’ll be happy to repeat time and time again like a great piece of music or a much-loved movie. It’s beautiful to look at, has a majestic and often haunting score, and feels like no other game before it. If we could, we’d force you to play it, but as it is we’ll simply urge you not to miss out.