If you’re setting out to build your own PC, you’ll need to consider what motherboard on to buy for mounting all your bleeding-edge components.

But before you rush off to buy that shiny new tech, you’ll need to decide upon the model of motherboard you want.

Motherboards may not be the most alluring or exciting component of PC building, but it can make or break any build. To ensure you get the best board for your needs, we’ve tested all the big-name motherboards on the market to present our current best picks for both Intel and AMD hardware.

We’ve drilled deeper elsewhere on the site, so if you already have your heart set on a new Intel processor or an AMD CPU, then head over to our Best Intel motherboard or Best AMD motherboard roundups.

Here’s a quick index of all of the best motherboard options – scroll down for the full breakdown, as well as links to our reviews: 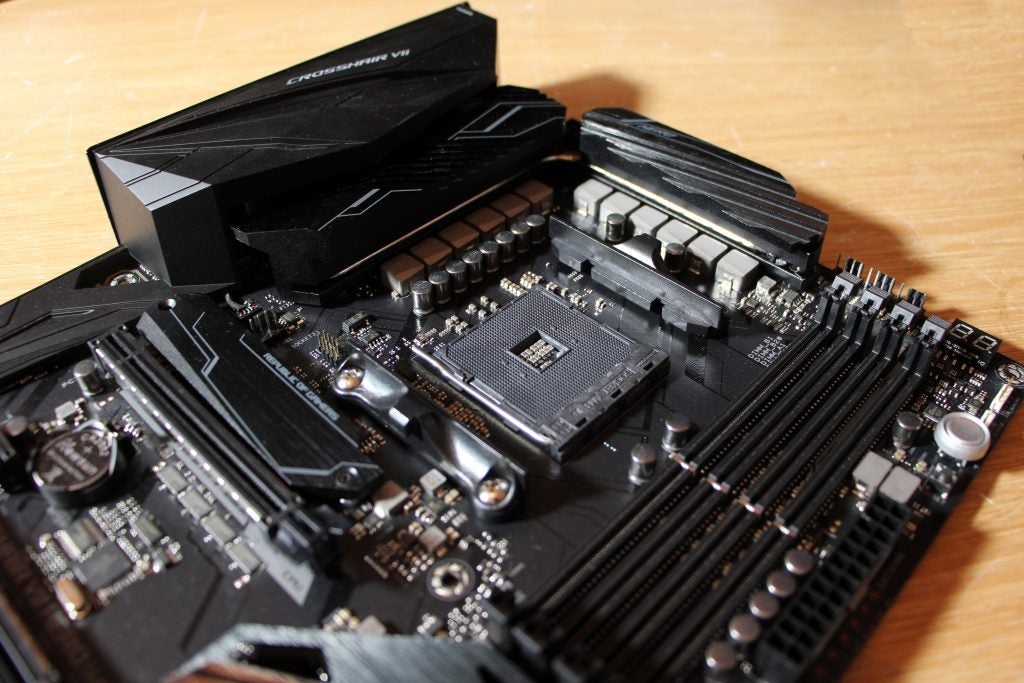 The best overall AMD motherboard you can buy right now

The Asus ROG Crosshair VII Hero (Wi-Fi) is expensive, but easily worth the price. It boasts excellent overall performance and is crammed with features.

There’s room for two graphics cards and you get an Nvidia SLI bridge included in the box. If you’re rocking a second-gen AMD Ryzen CPU, you can cram up to 64GB of 3600MHz memory in four slots here. In terms of storage, you get two M.2 SSDs and six SATA 3 ports.

Then there are nine USB 3.1 ports, plus a POST display, big metal heatsinks and lots of RGB LEDs, alongside a couple of connectors for AURA light strips if you really want your PC to light up like a bonfire night.

In our last group test, the Asus ROG Crosshair VII Hero held its own against rivals – but only just. Unless you’re set on squeezing out every iota of power from the ROG Crosshair VII Hero, you might be better served by opting for something cheaper. In terms of versatility and customisability, however, this Asus AMD board is your best overall option. 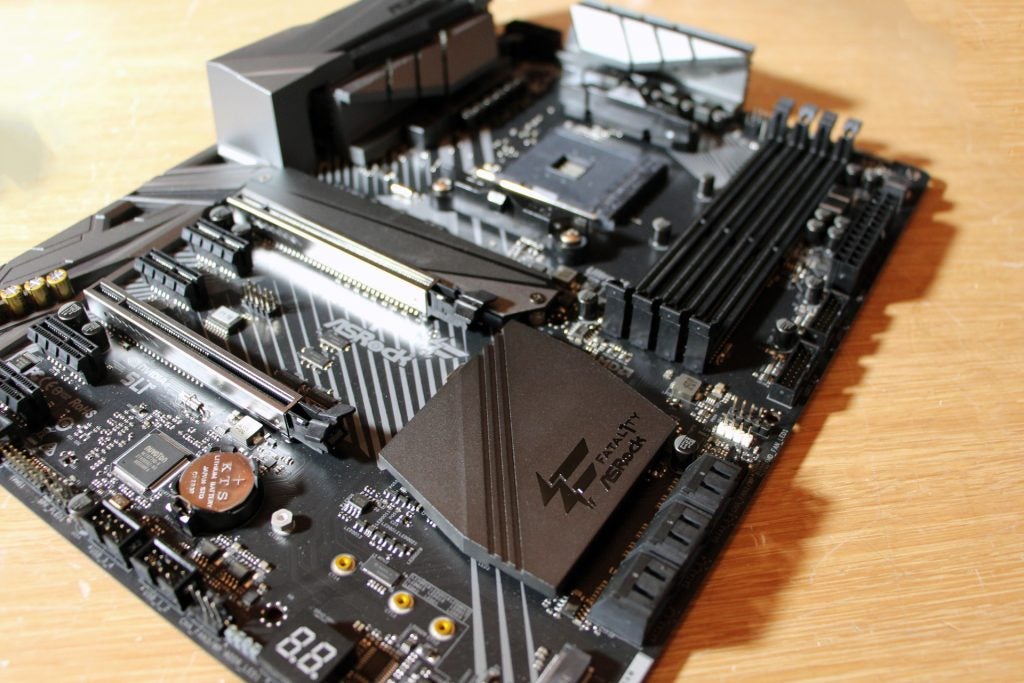 If you’re primarily building a gaming rig and you want something that will fly out of the box with minimal tweaking – but you want to save some money – then the ASRock Fatal1ty X470 Gaming K4 is a solid choice.

There are a few considerations here. The second M.2 port is slower, 10Gbps rather than 32Gbps, and you can only add up to 3466MHz DDR4 RAM – but neither stopped the Fatal1ty X470 Gaming K4 scoring well in gaming benchmarks. It’s less adept elsewhere, however, so if you want to do some creative work on the side then you should look elsewhere.

If you’re only interested in gaming, though, and want to save some money on a Ryzen-based rig, the Fatal1ty X470 Gaming K4 is a very good shout. 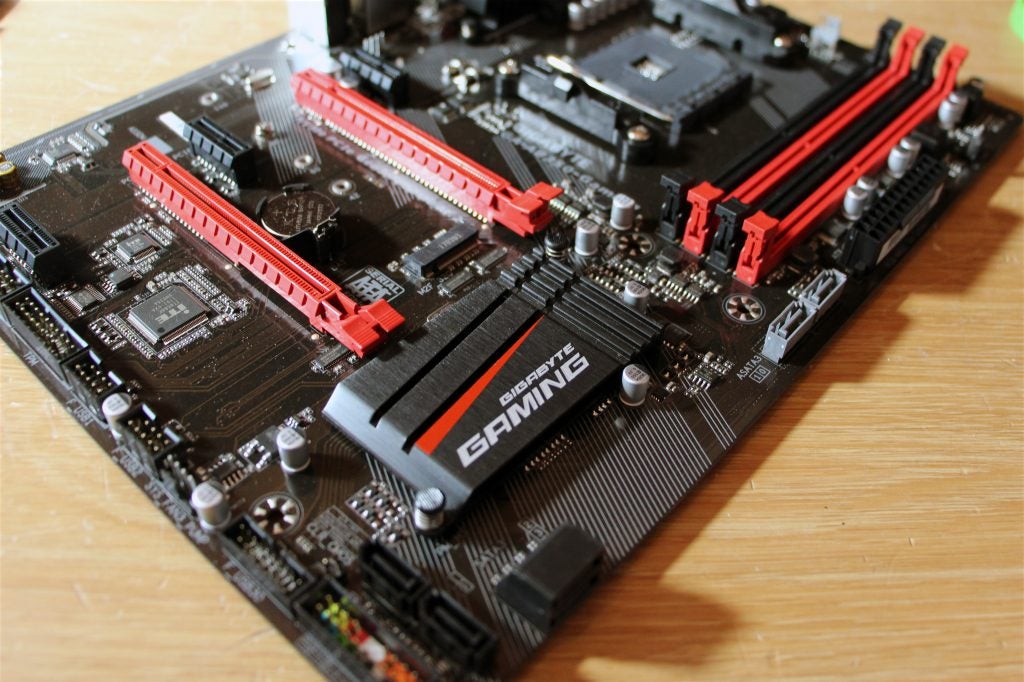 Cheap and cheerful, this AMD motherboard is good value, but not bleeding-edge

If the Fatal1ty X470 Gaming K4 is still a little out of your price range, then consider the Gigabyte AB350 Gaming.

Since it really only supports one graphics card – the top PCI-E x16 slot runs at its full speed, but the second slot runs at just x4 speed, which isn’t fast enough to support a second GPU – and one M.2 SSD, it’s also ideal for people building a rig on a budget.

You get an older Intel chipset, which won’t impact day-to-day use. However, there’s no USB Type-C – only three audio jacks, and four fan connectors – and is limited to basic Gigabit Ethernet speeds.

That said, the Gigabyte AB350-Gaming performed well in gaming, application and storage tests, making it a good option if you want to build a basic machine with a gaming focus. 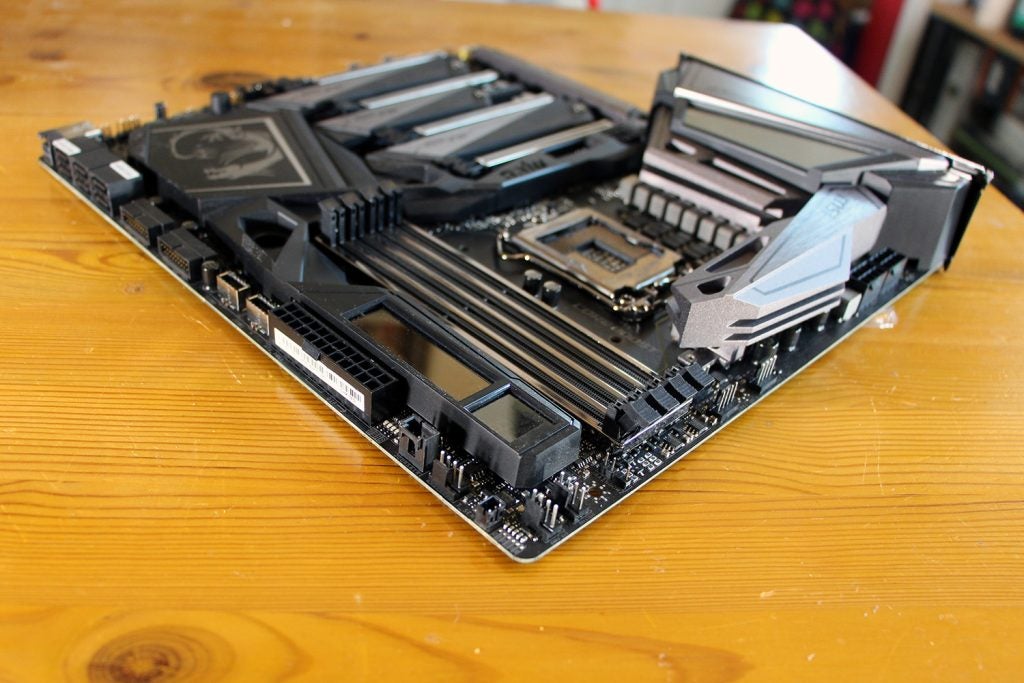 If you’re intent on building a powerhouse PC with lots of uses besides gaming, then the MSI MEG Z390 Godlike is currently your best option. While it’s beaten in the gaming stakes by the Gigabyte Z390 Aorus Xtreme, MSI’s MEG Z390 Godlike is better suited to creative work.

That’s not to say it’s a slouch at gaming – its 3DMark: Fire Strike score of 17,896 was the best in our latest group test of Intel motherboards, and it only trailed behind the fastest boards in both Middle-earth: Shadow of Mordor and Shadow of the Tomb Raider by a few frames per second.

Of the four PCI-E x16 slots, the top one runs at the full 16x speed, and you can run two at 8x speed. The four memory slots let you slot a whopping 128GB of DDR4 RAM in here. That may be overkill for gaming, but if you’re building a PC to do heavy photo and video editing then you’ll need that kind of extra headroom.

Storage connections include three M.2 SSD slots, each with their own dedicated heatsinks, a U.2 slot, and six SATA ports. There are also ten fan connectors, including ones for a water pump and CPU fan jumpers – so no matter what you slot in here, you’ll be able to keep everything nice and cool.

Yes, the MSI MEG Z390 Godlike is expensive, but if you want an all-round powerhouse then this is it. 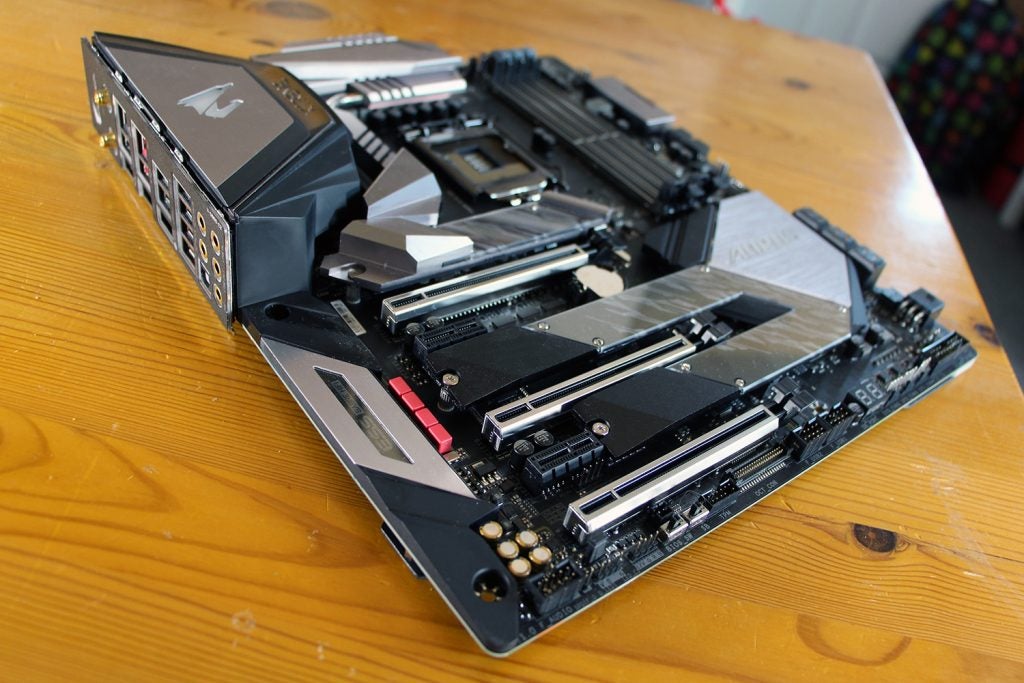 If you’re in the market for the best Intel motherboard for a gaming rig, then you should consider the Gigabyte Z390 Aorus Xtreme.

It’s the reverse of the aforementioned MSI MEG Z390 Godlike in the sense that it excels at gaming, but is found wanting in other areas.

There are three steel supported PCI-E x16 slots, two of which will let you run dual GPUs at 8x speed, so you can really push the graphical performance of your rig.

You get three M.2 SSD sockets for all your storage needs and can get up to 128GB of DDR4 RAM on here – not that you’d ever need more than 32GB for gaming, mind. In terms of networking, you get two Gigabit Ethernet ports, one giving you 1Gbps, and the other a very generous 10Gbps of bandwidth – handy, if you have a router capable of making the most of that and you’re getting decent service from your ISP.

On top of that, you get little extra features such as buttons to alter the CPU’s ratio and base clock speed, eight fan connectors, Thunderbolt, Type-C USB 3.1 and an HDMI port.

The Gigabyte is an expensive board for enthusiastic gamers and tweakers, and it delivered with reasonable gaming pace and lots of relevant features. It’s the best gaming-centric Intel board we’ve recently tested, but only pick this up if you’re going to make the most out of the dual GPU functionality and you’re building a rig that you’re likely to tweak. If you’re only making a single GPU gaming PC, aim for something a little less overpowered (not to mention cheaper). 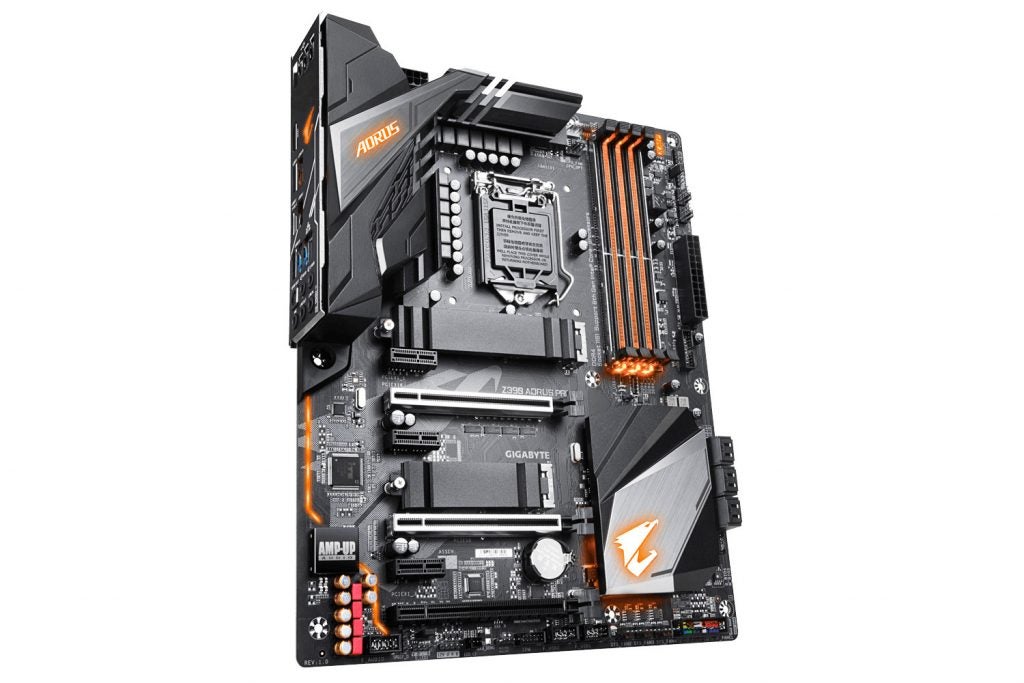 The Gigabyte Z390 Aorus Pro strikes the right balance between features and price, offering respectable gaming and application performance for a cost that won’t drain your wallet.

In terms of features and ports, you get an extra four-pin CPU power connector for overclocking, two M.2 slots that both have heatsinks – uncommon at this price point – and six SATA ports.

Like the more expensive boards here, you can have up to 128GB of DDR4 memory sitting on the Gigabyte Z390 Aorus Pro, which means you can configure this for gaming or heavy photo work – or both, depending on what you’re after.

You get three PCI-E x16 slots: one at full speed, a second capable of 8x speed and a third at 4x speed. Alongside, there are three PCI-E x1 slots, meaning for single GPU builds, the Z390 Aorus Pro is a better buy than a more expensive board with multiple 8x speed slots. You do get dual support for Nvidia and AMD cards here, however, if you want to dip a toe into that world.

The networking and audio hardware is good, and you get plenty of on-board fan connectors and USB options – including a front-panel USB 3.1 Type-C connector. The rear I/O is well equipped too, with five full-size USB 3.1 ports and a couple that support the newer, faster Gen 2 protocol.

Few other boards at this price offer so many features and so much balance, and the Gigabyte also delivered great performance. It’s better than all of its affordable rivals in application tests, proved speedy in application and memory benchmarks, and finished off with gaming results that outpaced the competition.

This board is a few pounds more expensive than others in the middle of the market, but it justifies its price with great features and performance. It’s the best mid-range all-rounder.

These tips are pretty universal – they’re applicable whether you’re buying an AMD or Intel processor, and they’re still valid if you’re on a budget or looking for the most expensive products.

For starters, there’s the physical size of the board. Most motherboards use the full-size ATX design, which is the largest mainstream option. Those boards will require the biggest cases, but they also offer numerous advantages. They have more PCI-Express slots and memory sockets than their smaller counterparts, and generally offer better storage.

Many ATX boards also tend to be a little faster than smaller form factors, perhaps because there’s less pressure on the components to be crammed into a smaller space. Such boards seem to be more receptive to water-cooling too.

Micro-ATX motherboards are medium-sized boards that still offer a solid amount of hardware, with multiple PCI slots and good storage and memory options.

Mini-ITX motherboards are the smallest on the market, which means obvious trade-offs. They’re fantastic for building tiny PCs for gaming or media, but they have fewer memory sockets and PCI slots – and fewer high-end features across the board itself. They also tend to cost a little more than equivalent ATX or micro-ATX products.

The physical size of the board isn’t the only consideration. Look at which chipset your potential purchase includes, because better chipsets from AMD and Intel will support a greater number of features in every department. AMD and Intel chipsets will also offer different numbers of ports and sockets, so compare the two before you buy.

Check how many memory sockets the board includes and how fast the memory can go – it’s no good buying rapid DDR4 if it can’t run at full-speed on your chosen board. Similarly, make sure a motherboard has the right storage connections for the SSDs and hard disks you want to install.

Also check the PCI-Express sockets – some motherboards include full-length x16 slots that only run at 4x speed, which is no good if you want to run dual-graphics. And make sure you have a sufficient number of PCI-Express x1 connectors for expansion cards.

The form factor, chipset, connectivity and price are key attributes when picking a motherboard. Benchmark speed is another factor, of course, but is less important than ever – many benchmarks perform similarly, no matter the chipsets or features they have. As such, the components you pick are far more important when it comes to determining the pace of your PC.

Best Intel and AMD motherboards – How We Test

The motherboards are put through a demanding suite of benchmark tests. We run Geekbench 4 to test single- and multi-core application speed, and use CrystalDiskMark to test the SATA storage interfaces on these motherboards.

We use 3D Mark: Fire Strike to evaluate gaming ability, and then test power efficiency by measuring the board’s power draw when idling and when running Prime95’s CPU stress-testing benchmark.

We’d like to thank Overclockers UK for providing some of the boards included in this test.