What is the Nokia 8 Sirocco?

The Nokia 8 Sirocco is the flagship in Nokia’s 2018 smartphone lineup. It’s a pricey device that certainly impresses with its quality build.

In other respects it already seems slightly dated, however. A 16:9 screen and processor more common in 2017 make the Nokia 8 Sirocco appear to be a device designed well before the Nokia 7 Plus, and most of the rivals at a similar price.

High-quality build, good battery life and clean software still appeal, of course. But the work put into making the Nokia 8 Sirocco feel so expensive deserves to be matched with hardware as competitive.

The Nokia 8 Sirocco wears its high-end build like a new jacket. Nokia seems proud of what it has created here – and it has reason to feel this way.

Glass and metal are used throughout, similar to every other top-end phone of 2018. However, the Nokia 8 Sirocco seems a little different.

Nokia hasn’t aimed for an ultra-smooth feel that downplays the cool ’n’ hard properties of these materials. Its front is curved, as it is in the Galaxy S9, but the metal sides protrude a little. Their cut edges highlight the metal, and it isn’t a commonly used aluminium alloy either. 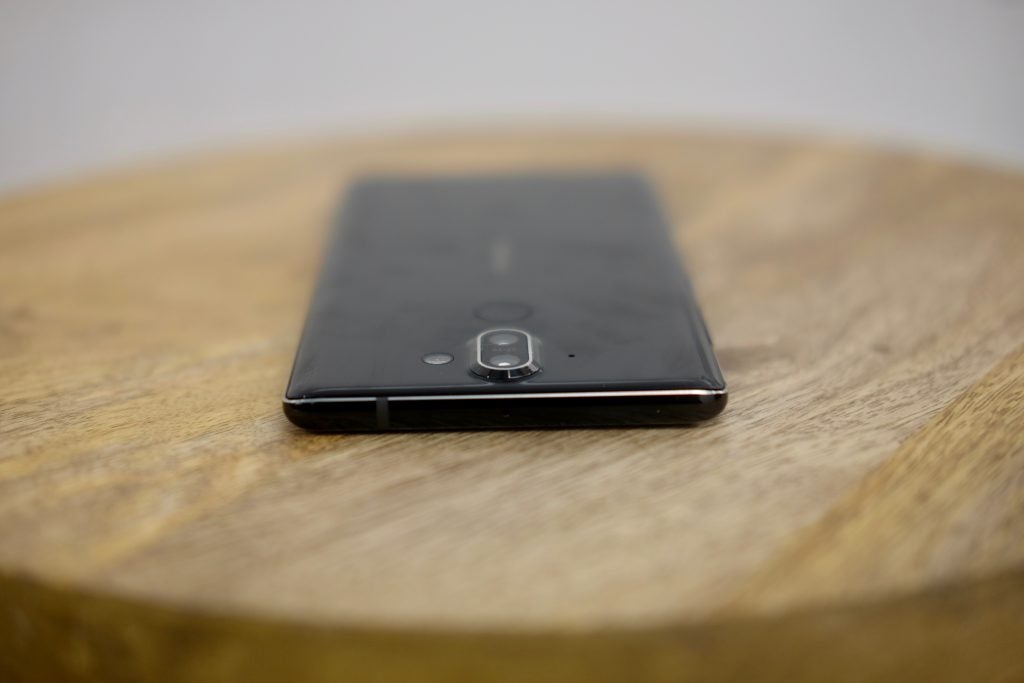 The Nokia 8 Sirocco’s sides are steel, which doesn’t dent or scratch quite as easily. It’s a denser metal. It’s also partially finished with a glossy black coating, which is unexpected and impressive.

Not everyone will love the design, however. The Nokia 8 Sirocco’s sides may not be sharp, but they are far less smooth than those of the LG G7 ThinQ, HTC U12 Plus or Samsung Galaxy S9. I tend to use the phone with its back resting across my palm, though, so haven’t found it off-putting.

Other parts of the hardware are more mixed. The Nokia 8 Sirocco will appear quite stubby, if you’ve been using a 18:9 screen phone. Nokia has trimmed down the display surrounds to appear reasonably modern, but since the Sirocco sports a less tall 16:9 display, the shape seems much less slender than the competition.

The handset is also relatively heavy, likely a result of all that steel, which is heavier than aluminium. It weighs 177g, 14g more than the Galaxy S9. This weight difference isn’t too apparent in use, however. 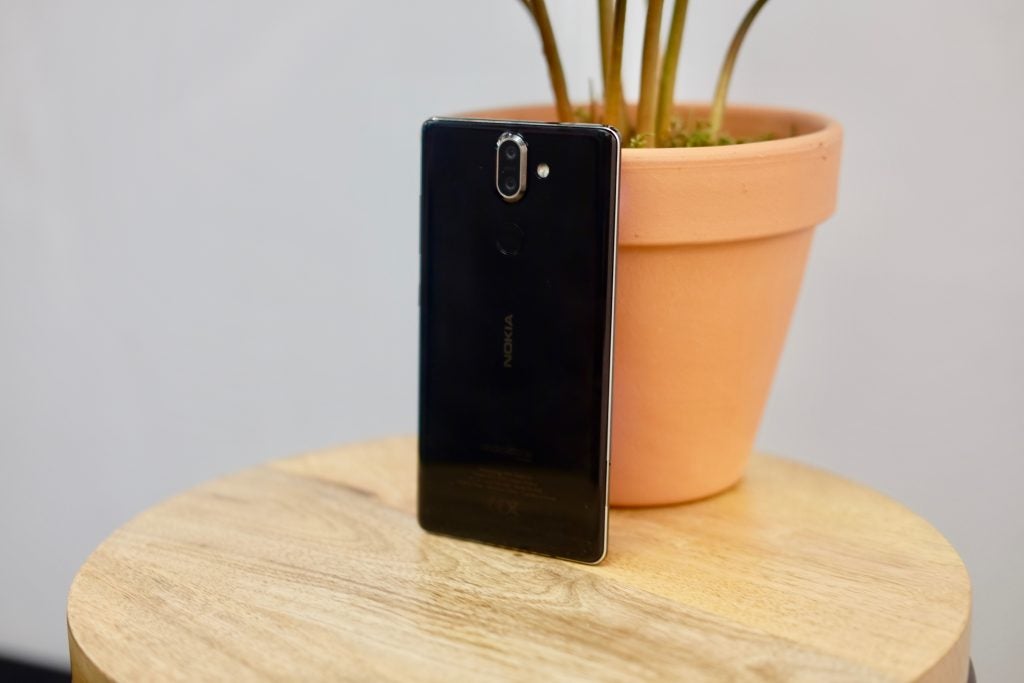 On the inside, the Nokia 8 Sirocco includes 128GB of storage, which is excellent. And the device is waterproof to IP67, allowing it to withstand submersion in water to a depth of 1 metre for 30 minutes.

However, the device lacks a headphone jack, one of the most consistently annoying trends in current phone designs. Want a headphone jack? Then you can choose from the LG G7 ThinQ, OnePlus 6 or the Samsung Galaxy S9 instead.

The Sirocco has a fingerprint scanner on its rear. It uses a raised ring border instead of a set-in pad, which would have been easier to locate. In addition, the scanner isn’t quite the fastest around, taking somewhere between a half-second and a second to get you to the homescreen. This isn’t terrible, but others are faster.

The Nokia 8 Sirocco speaker isn’t great, either. It fires out of the bottom of the device and, while loud, there’s virtually no bass. Treble sounds too sharp at high volume, too. Every other big-name phone at the price beats it.

The Nokia 8 Sirocco’s screen should be one of its stronger components. It’s an OLED; it curves around the front glass as can be seen in the Galaxy S9, and its resolution of 2560 x 1440 is great.

Despite these positives, the panel is actually one of the weaker parts of the phone, for two main reasons. First, as mentioned earlier, it’s a 16:9 panel rather than an 18:9 one.

Before experiencing a 18:9 phone, the change struck me as a pretty frivolous way to get us to upgrade our phones at a time when hardware improvements mostly aren’t that exciting. However, 18:9 screens are useful.

They let a phone fit in more screen inches without increasing its actual width, making it feel bigger. An 18:9 screen also allows you to view far more of a web page or article on-screen. And, the bit I enjoy most, a taller screen provides more space for virtual gamepad-style controls in landscape orientation games. Your thumbs no longer feel like they get in the way, as they will do at times here.

I’ve spent the past six months using 18:9 phones. Returning to a 16:9 phone feels like a step back. 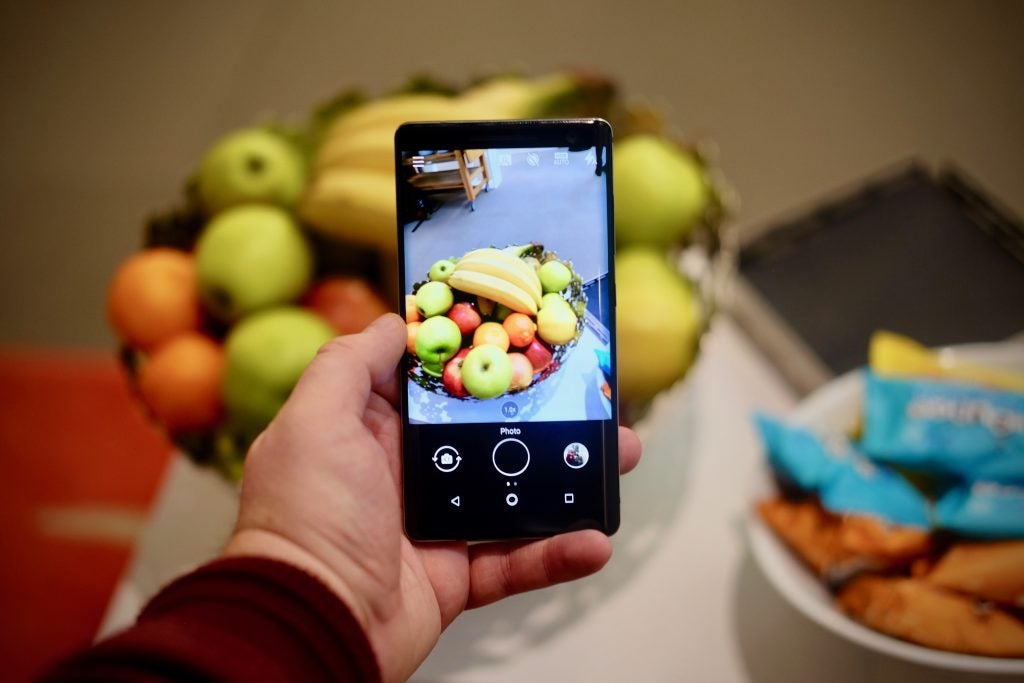 There’s also a problem with the P-OLED panel used. Unlike Samsung’s latest phones, the display takes on a blue skew at an angle. It’s a known characteristic of LG’s P-OLED panels. Many complained about this effect in the Google Pixel 2 XL.

The curved front of the Sirocco only serves to emphasise the issue. Open up a browser page and it will look as though there are blue-ish bars to the left and right sides of the screen. It’s less prominent in full-colour images as the white tone alters, but it still manifests as a slight darkening of the sides of the screen.

The Nokia 8 Sirocco’s curves look almost perfect with the screen off, not so much when it’s on.

There’s also zero customisation of the display’s colour profile. Most high-end phones let you choose a more or less saturated look. On occasion, they’re even calibrated to industry colour standards such as sRGB or DCI-P3. Here you have to accept what Nokia gives you.

It isn’t a bad look, with rich, punchy tones. However, those who like to rein in their phone for more accurate colours will find they’re unable to do so  with a Nokia 8 Sirocco.