The 9 PureView's camera is undoubtedly interesting but there's a question mark surrounding the price when it comes powered by last year's chipset.

Nokia’s flagship phone, and its rival to the Samsung Galaxy S10, is the Nokia 9 PureView – and it has five cameras on the back giving it a very distinctive design.

Optics and camera performance is clearly the focus here and you’ll be able to find a full rundown of all the camera specs and how it works below, along with a selection of sample snaps taken with the phone running a pre-release version of the software.

It’s not all about the camera though, and even though the PureView is priced to rival the OnePlus 6T and Honor View 20 it still packs plenty of features. There’s an optical in-display fingerprint scanner, IP rating, Qi wireless charging and a high-resolution OLED display with HDR support.

The Nokia 9 PureView is available for pre-order from February 24 and launches in March/April, with a proposed retail price of $699 (US). In the UK you can pre-order it now from the official Nokia website for £549.

If you do pre-order it now you’ll also get yourself a free pair of Nokia wireless earphones to sweeten the deal. Nokia is currently saying the phone will release in the UK from April 1 2019, however this might change. 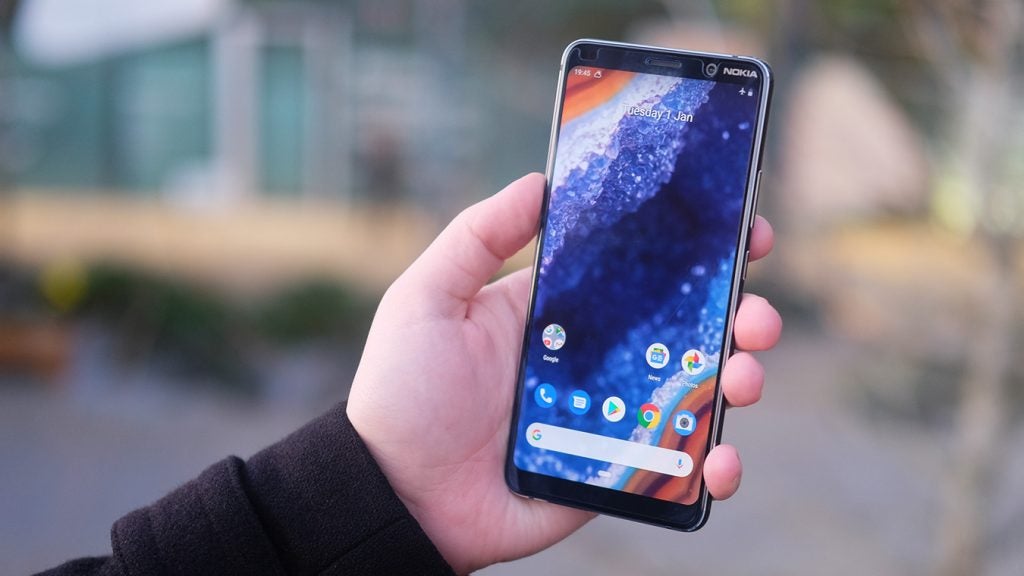 There’s every chance that you’ve seen the Nokia 9 PureView already; its existence leaked almost as much as the Samsung Galaxy S10‘s did and talk of what HMD Global might be cooking up with the return of the PureView name has also been floating around for a while too.

Now that the phone’s finally here I was able to gauge just what the company’s been up to and it would seem it’s all about that new camera, or rather cameras.

Where the Huawei P20 Pro ventured into then-unknown territory with its impressive triple camera arrangement, HMD has thrown out the rulebook and given the 9 PureView a total of five 12-megapixel rear sensors, alongside an LED flash and a ToF (Time-of-Flight) imaging sensor. 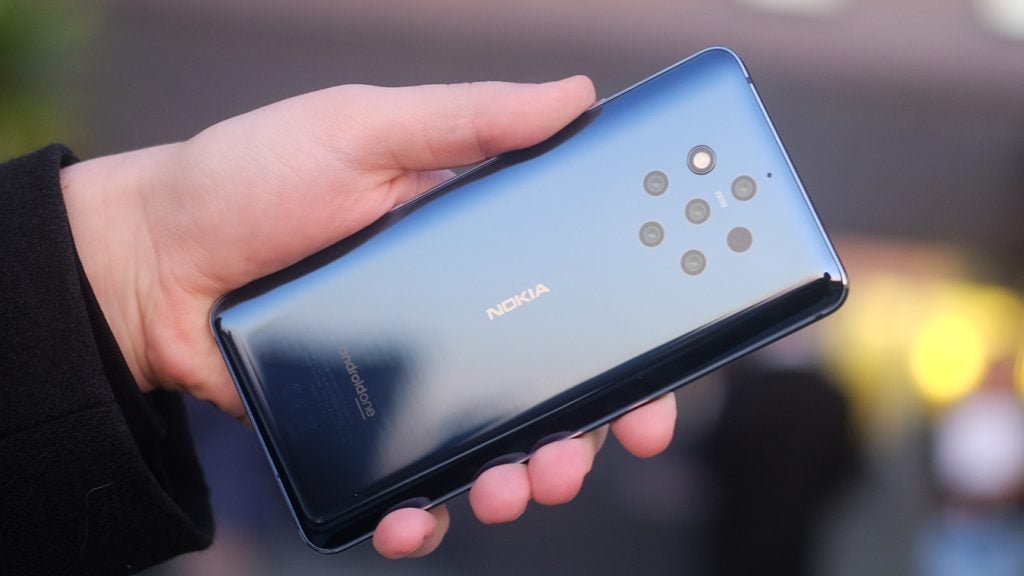 All of these cameras rely on the same underlying module, with two geared towards RGB light while three are tuned to only pull in image data in black and white. HMD says that this setup allows the phone to capture the “full spectrum of light”, supposedly absorbing more than 2.9x the amount of light compared to your typical phone camera setup.

In developing the phone’s unique arrangement, HMD partnered up with computation photography specialists Light, responsible for the sixteen-sensor-laden L16 camera. From Light, the PureView draws on both specialist hardware and image processing algorithms to pull off its imaging tricks. 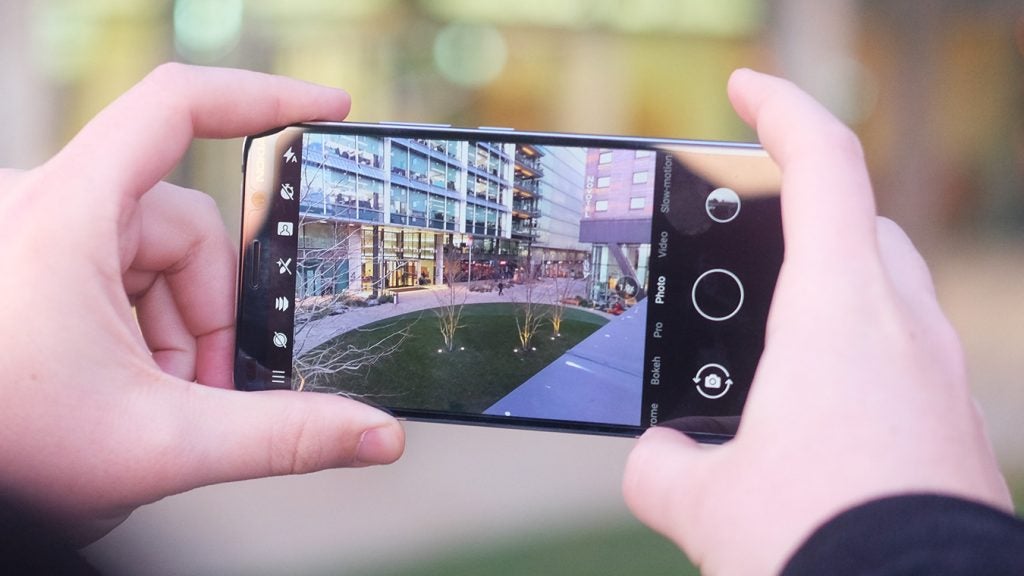 For starters, the phone actually consolidates data from each of the five rear sensors each time you take a snap and depending on the scenario, the phone may use multiple shots from its various rear cameras, meaning between 60 and 240-megapixels’ worth of data is distilled into a final 12-megapixel image. 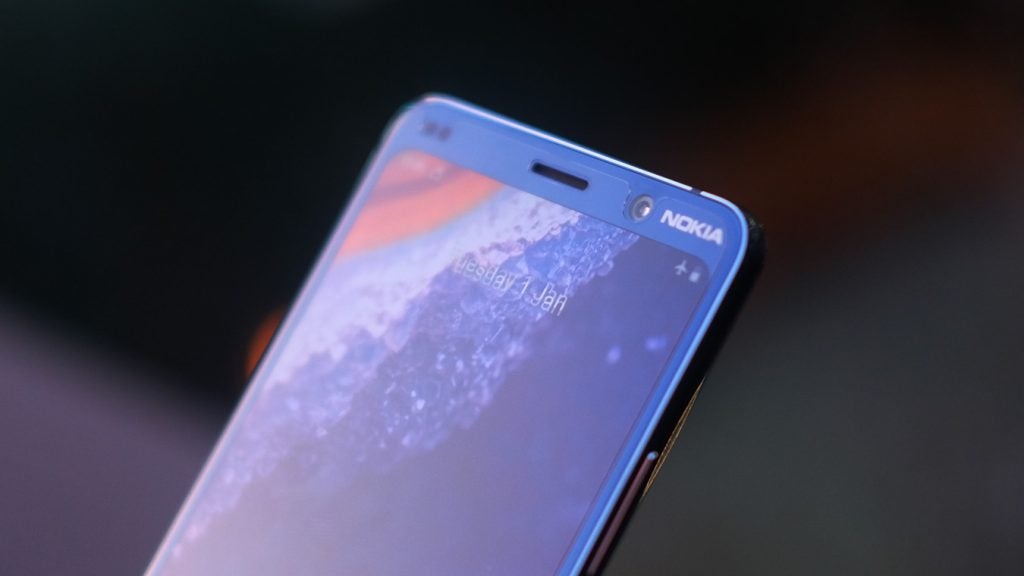 The 9 PureView’s camera promises unprecedented detail and dynamic range (up to 12.4 stops), plus the ability to gauge some 1200 layers of depth information (smartphones conventionally leverage just 10 layers) ranging from 7cm up to 40m. HMD has even baked depth controls into the Google Photos app, so you can refocus and toy with this feature after the fact.

RAW/DNG support is also part of the equation and what’s more, HMD has worked with the Adobe Lightroom team, so that all that additional image data is available for manipulation. Lightroom for mobile will also benefit from a 9 PureView centric lens in a future software update.

As part of my initial encounter with the 9 PureView’s many cameras it’s hard to pass judgement right now, indeed once images finish processing the dynamic range demonstrated does indeed look promisingly good, but without side-by-side comparisons with the other leading cameras phones currently on the market, it’s hard to tell whether HMD really has an edge here.

Check out some of the samples I captured using a 9 PureView running on pre-release firmware: 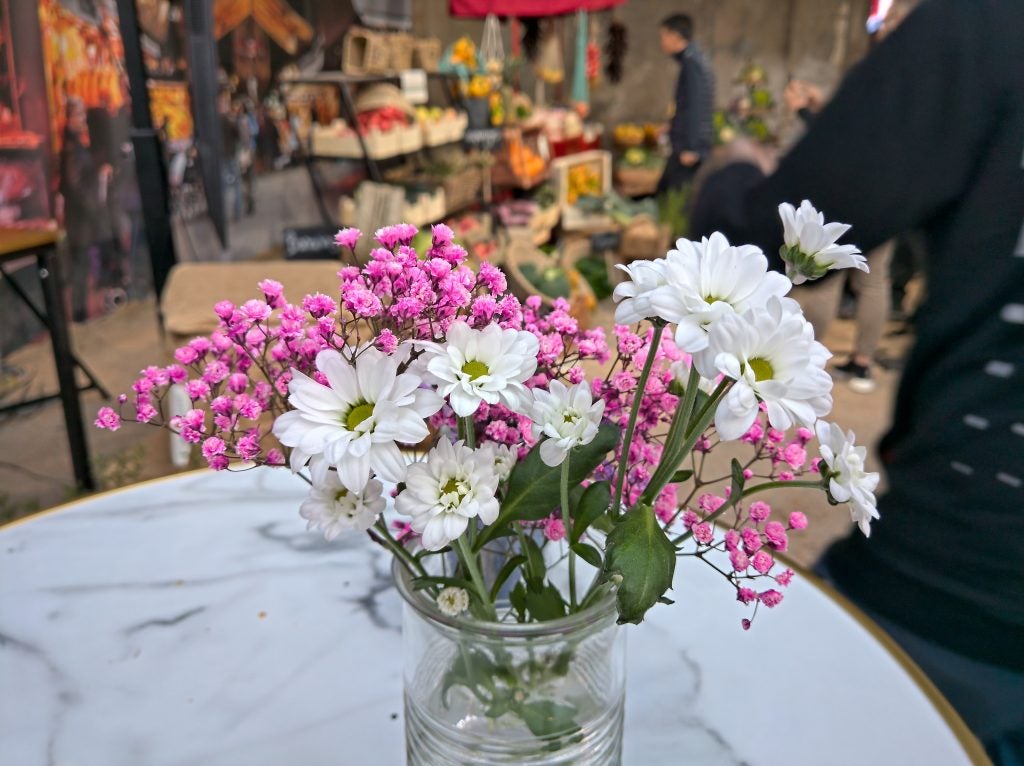 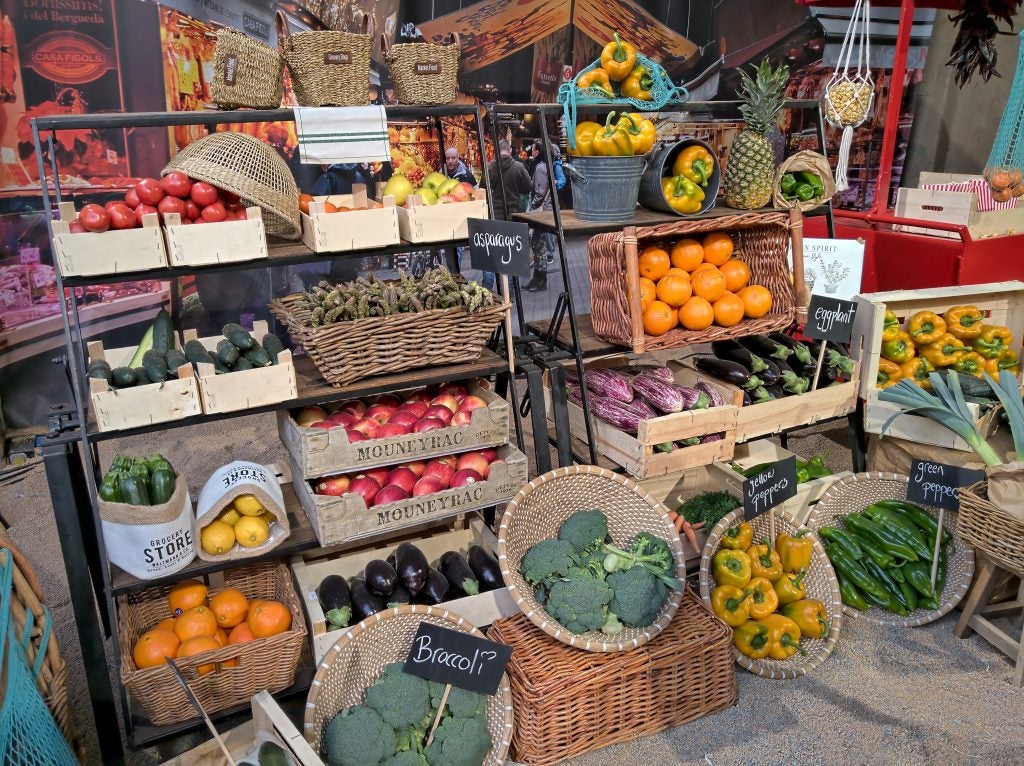 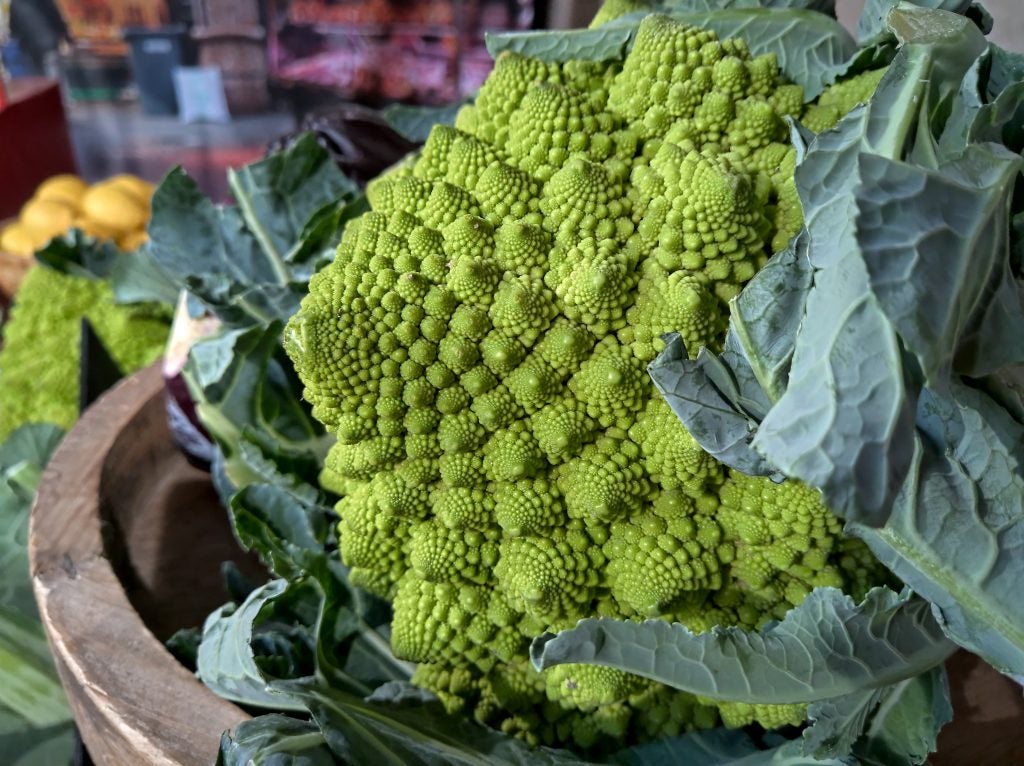 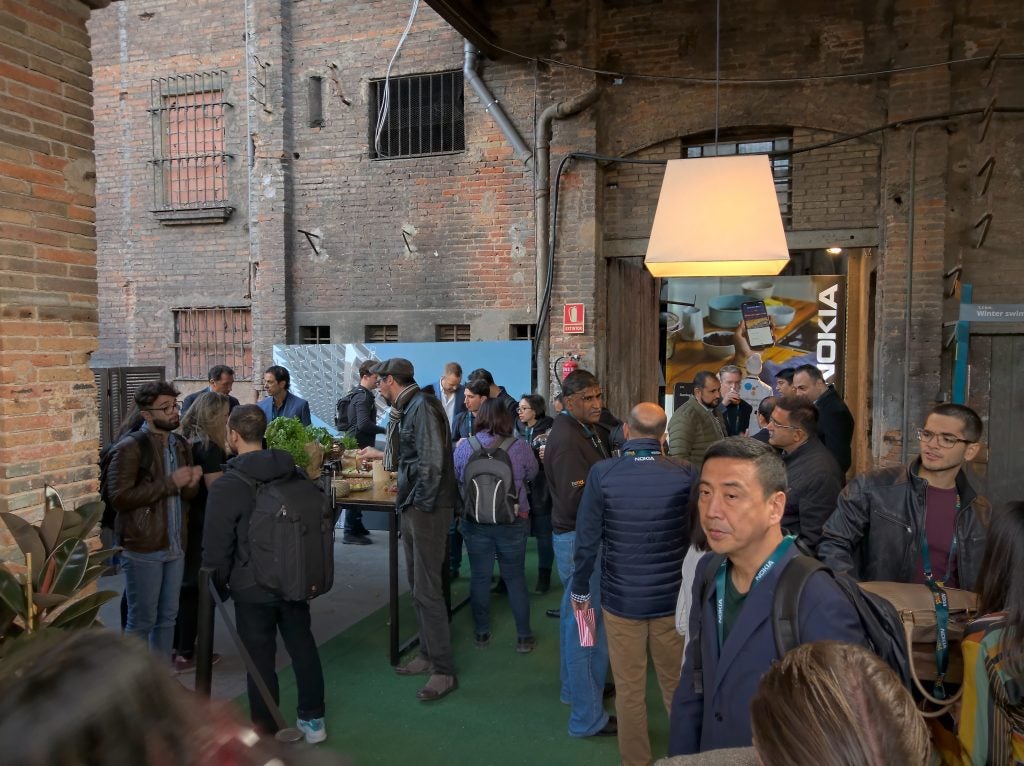 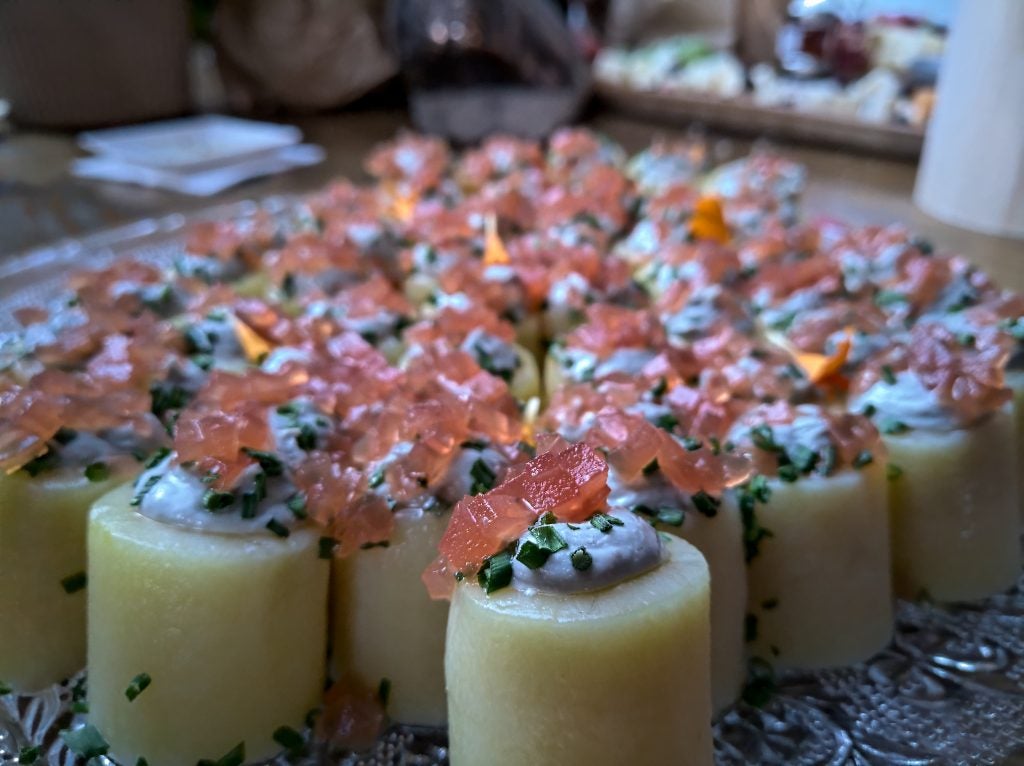 There’s also the matter of stabilisation. Five cameras allow for shorter exposure times which HMD says means the phone doesn’t require any form of optical image stabilisation (OIS) system, even for use in low light scenarios. This is all well and good when using the phone as your photographic companion, but things are a little different when it comes to shooting video.

Switch to video recording and the benefits of those five sensors are gone, the phone reverts to using a lone 12-megapixel RGB sensor with only EIS to help smooth out footage. Naturally, on a phone of this calibre video doesn’t look awful but without the assitive properties of the other sensors, by comparison it looks wholly unremarkable.

Interestingly, the phone is powered by last year’s Qualcomm Snapdragon 845 SoC instead of the 855 that many of the flagships in 2019 are toting. This comes about as a result of the work needed to tune and tie support into Light’s dedicated chip and the multi-camera setup at play, but for some that might be reason enough to leave the 9 PureView well alone.

It’s a trait that also held Light’s L16 camera back, which was still using a Snapdragon 835, long into the 845’s reign.

Beyond the camera, the phone feels like a more cut-and-dry high-end Nokia. A near-unaltered Android 9.0 Pie software experience underpins everything, not dissimilar from Lenovo/Motorola’s approach to firmware. Part of the Nokia package guarantees a prompt update to the next major release of Android and security patches for at least three years.

Like its predecessor, the Nokia 8 Sirocco, wireless charging comes built-in, while wired charging via the phone’s lone USB-C port (which is to say there’s no headphone jack) supports Qualcomm Quick Charge 3.0.

There’s a flat 5.99-inch pOLED display that gave me little reason to complain on first viewing, with a pleasingly crisp 2K resolution, nice colours, good brightness and viewing angles, and enough chutzpah to gain the company’s PureDisplay branding. There’s also an in-display fingerprint sensor, although it’s optical, rather than ultrasonic. For the time being, that talent remains exclusive to the Galaxy S10 family.

So much of what makes up the Nokia 9 PureView feels heavily entrenched in 2018 hardware, suggesting that the phone’s appeal and success leans almost entirely on that intriguing new camera array.

What do you think based on our initial experience with the Nokia 9 PureView? Let us know on social @TrustedReviews.