The MSI GS66 Stealth is a good upgrade from the GS65 Stealth, offering a welcome redesign and top-notch specs. Some pesky flaws mean the GS66 Stealth might fall short at a price point that is more fiercely competitive than ever.

Capable gaming laptops that don’t break your back or the bank are having a moment right now. With competition as fierce as ever, MSI will need to knock it out of the park with its new GS66 Stealth offering.

The MSI GS66 Stealth sees some big changes from its previous iteration, looking remarkably different and sporting the latest and greatest hardware.

As the name suggests, MSI’s new laptop is looking to give gamers a more on-the-go option for gaming. Unfortunately for MSI, this area has long been occupied by the strong Razer Blade 15 while also featuring a new contender, the Asus Zephyrus G14. Can the MSI GS66 Stealth compete?

The design of the GS66 Stealth is the prime talking point for the new gaming laptop, offering a mixed bag of good looks and impractical hindrances.

Starting off with the good, this version of the MSI Stealth comes in black and is definitely one of the best-looking gaming laptops around. Think similar to the Razer Blade 15 but with an even subtler look due to a black embossed logo rather than Razer’s garish green take. 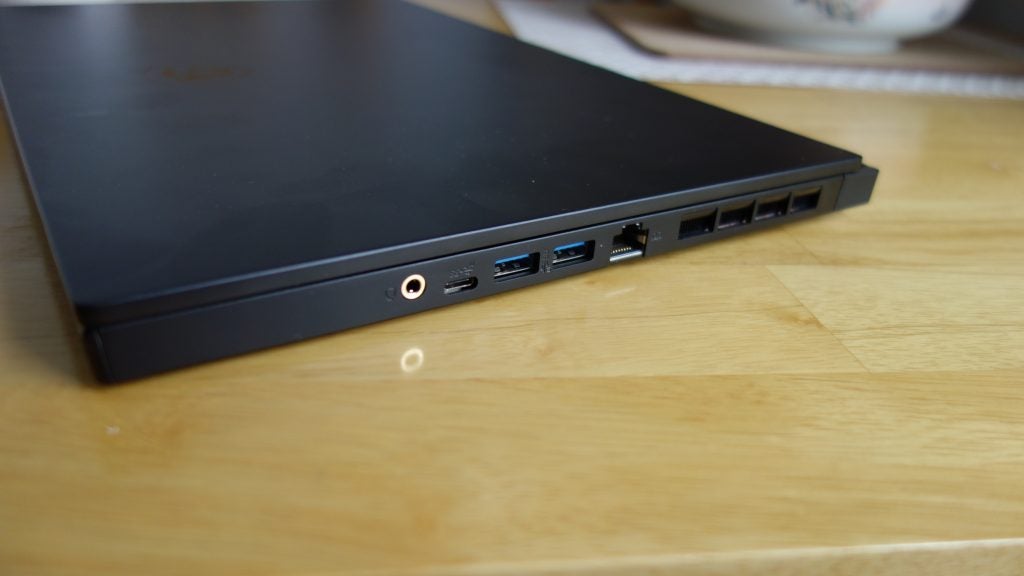 MSI’s Stealth range kicks off at 15-inch in size, meaning that you won’t really want to be hiding it away in a day-to-day work bag.

Instead, the size of the MSI GS66 Stealth is more equipped for moving from room to room in your house or, maybe, the odd trip to a friend’s house.

In terms of looks and quality, the MSI gives off a great first impression. The all-black metal chassis looks amazing. Open the laptop up, and the theme continues – no-frills but super-premium. 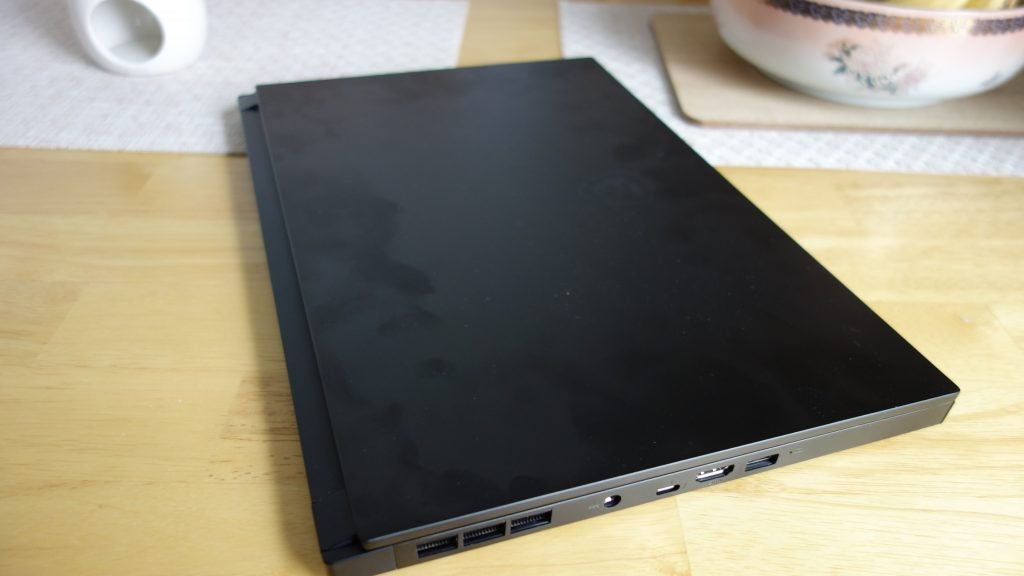 However, once you’ve first opened the laptop, the design’s biggest problem will have probably already emerged: this laptop is a fingerprint and smudge magnet – more than any other laptop I’ve reviewed.

Even if you try to avoid touching the device all that much, you’ll end up with an unsightly and smudged device soon enough, so keep a cloth handy.

The other snag comes in the form of a piece of plastic stretching from edge-to-edge on the bottom of the device. The plastic seems to be there as an angled ledge for your wrists to rest on more comfortably.

Unfortunately, it adds a bit of cheapness to an otherwise premium design. It’s also rather sharp to each side and is definitely something to be cautious of knicking on anything. 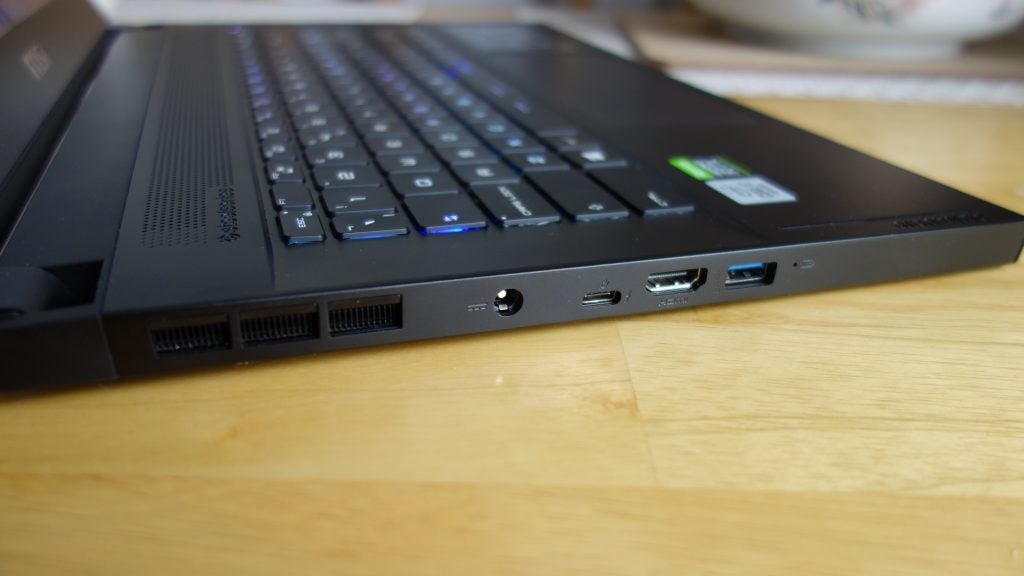 For ports, the GS66 Stealth isn’t shy. You get two USB-C (one features Thunderbolt 3 and Power Delivery charging), 3 USB-A, an HDMI, an Ethernet port and a headphone jack. A decent selection, however, some may be disappointed by the lack of any microSD/SD offering.

MSI has done a stellar job with the GS66 Stealth keyboard, providing one of the top gaming laptop typing experience on the market.

As always, these gaming laptops can’t match up to a quality mechanical keyboard, but MSI has given it a good go. You’re given plenty of travel at 1.5mm, and the experience is super clicky. 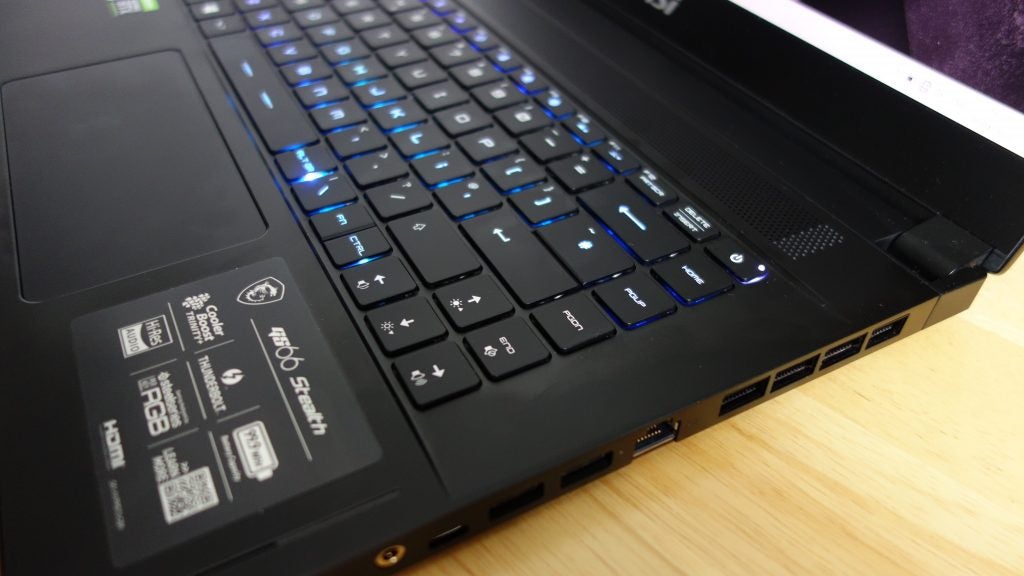 MSI has gone an interesting route with some key placements, however, with the function key on the right and only as a half-key shared with the right-ctrl.

The function row is also chockful of gaming-related features meaning brightness and volume toggles are shifted down to the arrow keys – which definitely takes some getting used to. 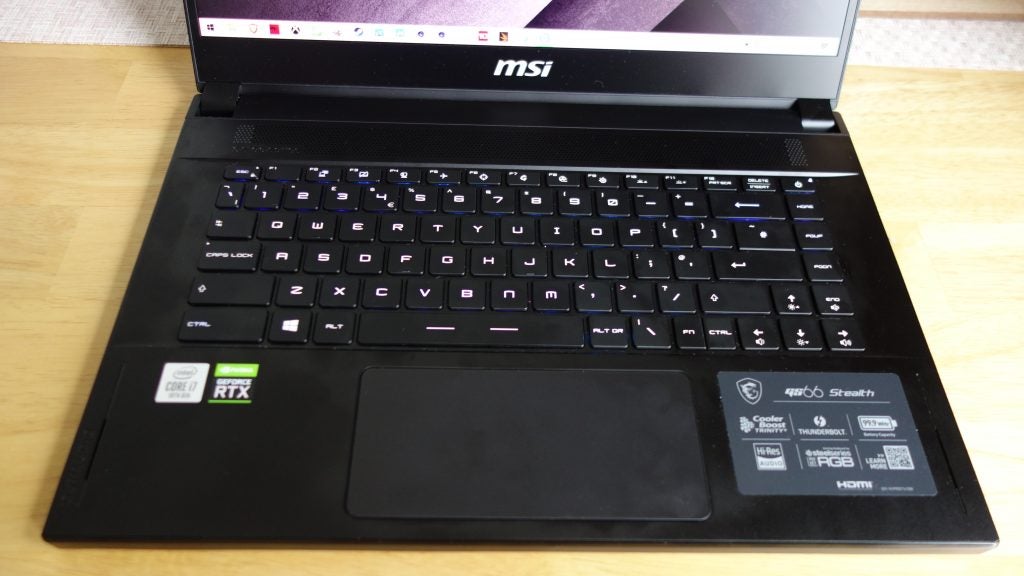 For fans of RGB, the keys have per-key lighting that is customisable via a SteelSeries program on the laptop, giving you a range of effects to tinker with.

While avid gamers likely won’t be getting much use out of it, the quality trackpad is definitely nice to have for any productivity task. The trackpad is very wide, giving plenty of room to manoeuvre, and it’s responsive all across its surface.

The MSI GS66 Stealth is sporting a corker of a display. The 1080p 240Hz panel provides a super-smooth gaming experience and even looks great for productivity and video-watching thanks to the accurate colour reproduction.

The display benchmarks back this up to, with the GS66 Stealth scoring 97% sRGB, 69% Adobe RGB and 71% DCI-P3. The stats make it one of the top-scoring gaming screens we’ve tested in terms of colour coverage. 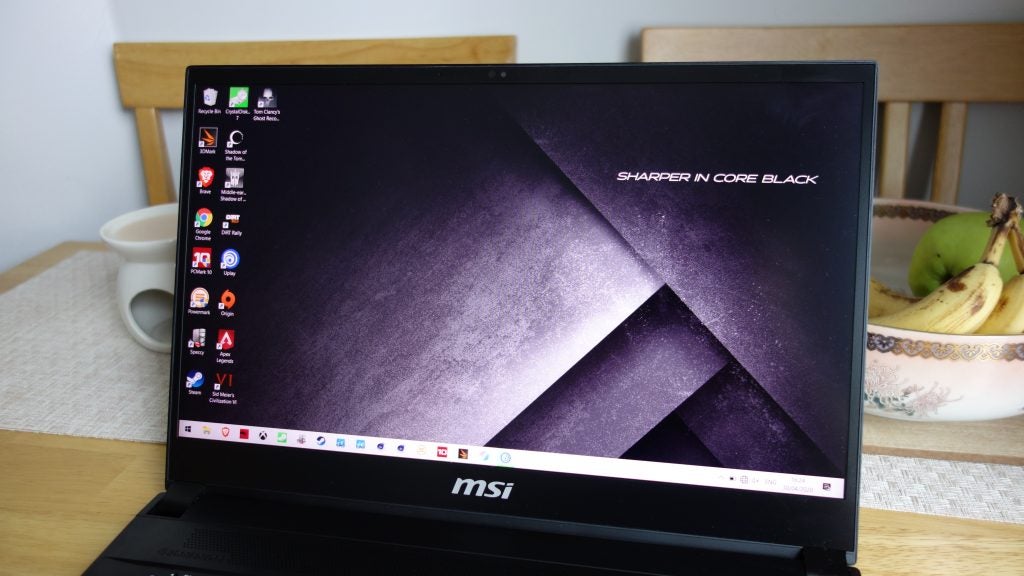 At 15.6-inch, it hits a size sweet spot for gamers who might find smaller displays far from ideal and bigger displays just impractical. The contrast ratio is also great at 1174:1, controbuting to a lovely punchy picture. The peak brightness level is about average for a laptop, but since you’ll likely be using this laptop indoors, it’s not really an issue.

Some gamers will be disappointed at the lack of G-Sync and FreeSync, which prevent screen tearing from ruining the visuals. Competitors such as the Razer Blade 15 also lack this feature, but the absence is becoming more unforgivable in an increasingly competitive market.

The specs give off positive results across the board, especially against competition that’s priced slightly higher (Asus ROG Zephyrus G14 at £1799) and the similarly-priced (Razer Blade 15 at around £1699).

However, the AMD-equipped Asus laptop expectedly tops the MSI in multi-core performance, giving it the edge for creative applications. In 3DMark though, the MSI just comes out as the winner there. The Razer sneaks ahead in this test due to its superior RTX 2070 card.

The race is also close when it comes to High settings frame rate scores from in-game benchmarks, as you can see above. Over in Apex Legends, a game where the frame rate is particularly favoured, our tests managed to hit just over an average of 100fps in regular play.

For SSD speeds, the MSI GS66 Stealth scored 2916.25MB/s for reading and 1998.34MB/s for writing. Once again, the MSI is close to the Razer in this department, which we’d consider pretty respectable.

The MSI GS66 Stealth is a decent-size gaming laptop so, hopefully, nobody is expecting to buy this and spend a full day gaming without charge. If you are, then you’ll be smacked in the face with a runtime of under two hours when gaming. Nevertheless, this isn’t shocking for a machine of this kind of spec. 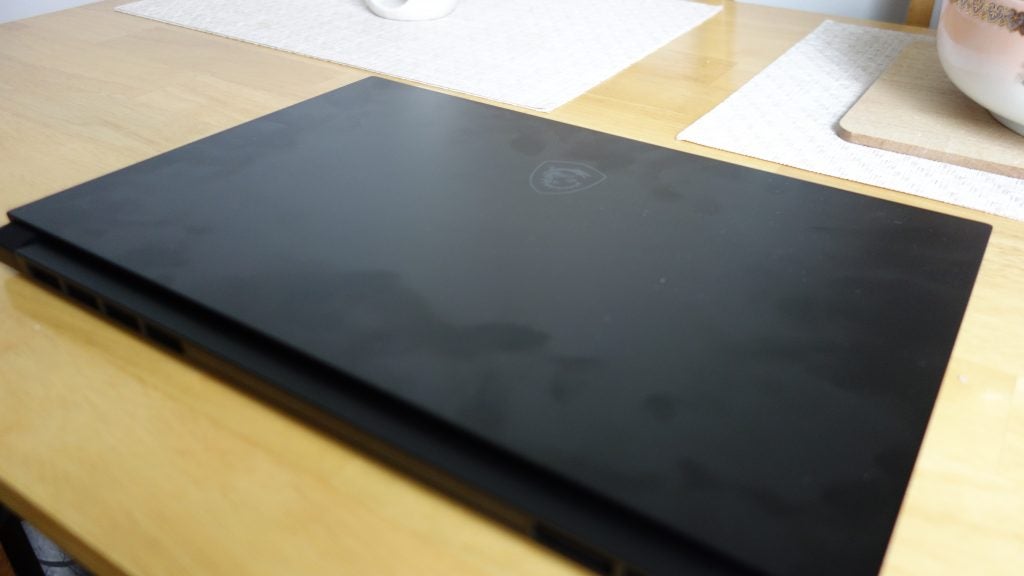 Where you might be surprised is the battery life outside of gaming. Our regular battery life benchmark that provides a productivity-focused test say this laptop reach a stunning nine hours.

If you’re buying this machine, then you’ll likely be expecting to spend most of your time getting the best out of its gaming chops by having it plugged in most of the time. However, it’s nice to know that, if you ever are without power and need to get some browsing or work done, the GS66 Stealth will go for hours.

Should you buy the MSI GS66 Stealth?

The GS66 Stealth is a solid effort from MSI in a competitive field. If you are a fan of MSI, then you likely won’t be disappointed with this effort.

However, with other manufacturers starting you down, you might have your head turned by the likes of the Asus ROG Zephyrus and Razer Blade 15 that stand out in other areas – portability and premium build quality respectively.

The MSI GS66 Stealth is a good upgrade from the GS65 Stealth, offering a welcome redesign and top-notch Full HD gaming performance. But pesky flaws mean the GS66 Stealth might fall short at a price point that is more fiercely competitive than ever.