The Razer Blade Stealth 2020 appears to be a great compromise for those wanting a classy ultraportable laptop that offers the ability to game in downtime. We've only tested a pre-production model as yet, which may not reflect the results of the final gaming ultrabook, so stay tuned for our final verdict

The Razer Blade Stealth 2020 has lofty ambitions, aiming to provide gaming grunt in an ultrabook form.

With the majority of gaming-capable laptops often cumbersome and clunky, Razer’s objective is admirable. However, achieving such a sweet spot in laptop design is decidedly difficult.

Razer’s latest attempt sees the Stealth 2020 fitted with the newly launched Nvidia GeForce GTX 1650 Ti graphics card. While this certainly isn’t one of the most powerful mobile GPUs on the market, it appears to offer decent Full HD performance while also keeping size and cost down.

The company sent over a pre-production model to Trusted Reviews, allowing us to take a closer look at this new gaming ultrabook to determine whether the company has achieved the perfect balance between power and portability.

But while this means I’ve been able to play games, run benchmark tests and use it as my day-to-day laptop for the past week, Razer has asked that I refrain from sharing any specific figures since they won’t reflect the performance of the final build.

However, I can at least impart my initial impressions about whether I believe the Razer Blade Stealth 2020 has what it takes to be an ultra-portable powerhouse.

Razer Blade Stealth 2020 price – How much will it cost?

A second configuration priced at $1999.99 sees a 4K upgrade with a 60Hz refresh rate display, while retaining the same graphics card.

There’s no word yet on UK pricing, but we’re in constant contact with Razer and will update this article once we hear more.

Razer Blade Stealth 2020 release date – When will it launch?

The Razer Blade Stealth 2020 will launch on 21 April in the US via the Razer online store.

There’s no confirmation on a UK release date just yet, but we’ll be sure to update this article as soon as we hear more. 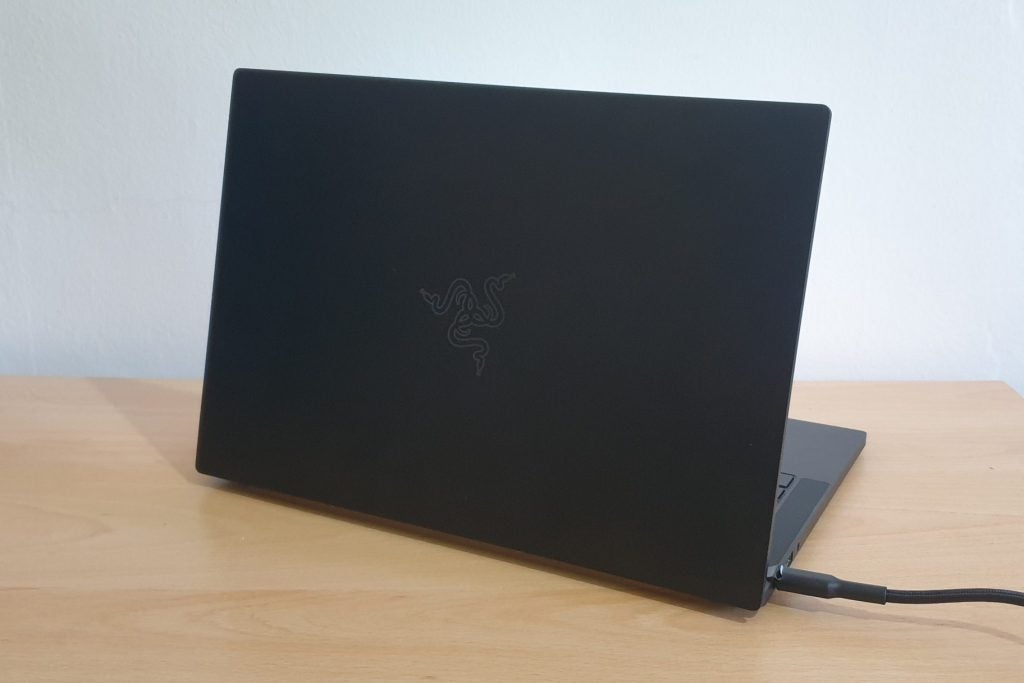 Overall, the design of the Razer Blade Stealth remains untouched for this 2020 model. Both configurations don the slender, black aluminium frame of the original. It’s a gorgeous laptop, carefully treading the line between classy Ultrabook and snazzy gaming system.

Despite the RGB lighting that sits beneath the keyboard, which can be customised to your preference with the superb Razer Synapse software, the Stealth flaunts a simplistic look that wouldn’t appear out of place in an office. Razer’s more modest approach is best conveyed in the lid’s logo, which abandons the luminous green colouring seen on the larger Blade 15 in favour of a stencil outline alternative.

The razor-thin bezel surrounding the screen ensures the Stealth looks modern, although since the display doesn’t reach the bottom of the panel, the chin still appears chunky – I’m still pining for a Razer system to imitate the InfinityEdge design of the Dell XPS 13 2020. 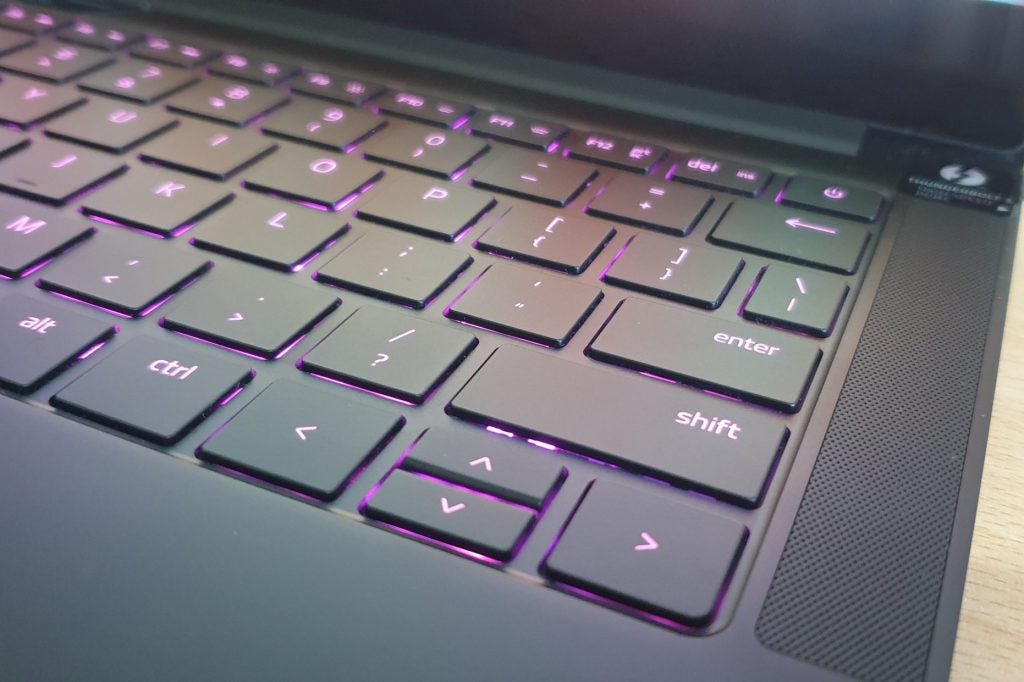 One change on the design front that Razer has carried through can be found on the keyboard. In response to customer feedback, the company has widened the size of the right-sided Shift key. While I can certainly see the benefits of this move, I’m disappointed that the result of this is that the “up” and “down” arrow keys have been squashed down in size. This has made it more difficult to play titles such as Civilization VI, which require frequent use of the arrow keys.

There haven’t been any changes to port options, with Thunderbolt 3, USB-A and a headphone jack all still present.

Overall, the design remains fantastic, with the laptop’s dainty 1.4kg weight meaning it can easily be held with just one hand. There’s been little aesthetic change then, but it wasn’t really a priority since the Razer Blade Stealth is already very competitive with the likes of the Dell XPS 13 and Surface Laptop 3.

Razer has launched two 13.3-inch display options for the Stealth 2020, allowing you to make a choice between Full HD and 4K. The former sees a nippy 120Hz refresh rate, which is theoretically great for eSports players, but I’m unconvinced that the integrated GPU is powerful enough to make the most of it.

I was sent the 4K model, with a 60Hz refresh rate. The Ultra HD resolution results in a fantastic-looking display; the Razer wallpaper sees colours burst from the panel for a mesmerising effect. 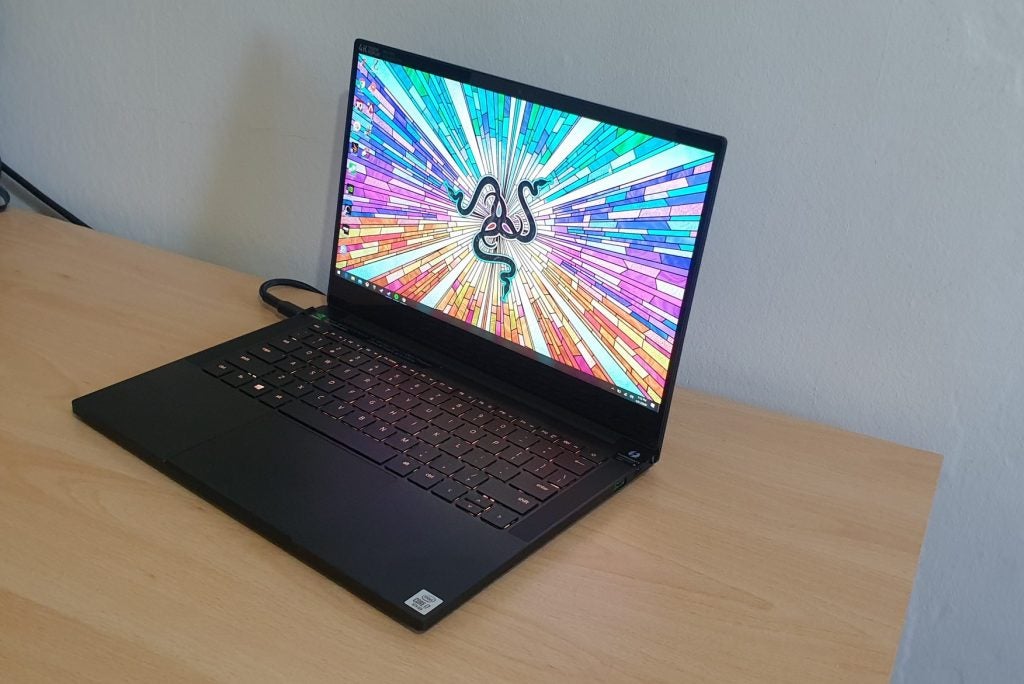 The GTX 1650 Ti GPU isn’t powerful enough for 4K gaming, however, leaving the high resolution limited to video streaming and basic photo/video editing. This will make it a needless luxury for the majority of people.

Personally, I’d rather save the cash and opt for the Full HD model – although there’s no denying that the 4K-screened Razer Blade Stealth 2020 is an absolute beauty.

The headline upgrade for the Razer Blade Stealth 2020 is the new GTX 1650 Ti graphics card. Nvidia is pitching this as a Full HD capable GPU, which should be available at a more affordable price than its more powerful GTX 1660 Ti sibling.

I ran multiple games and benchmark tests on the new Stealth, but Razer has requested I don’t publish any figures since this is just a pre-production model that may not reflect the performance of the final build. I can share my general impressions, however.

First, this is easily the most powerful Razer Blade Stealth laptop yet. The GTX 1650 Ti graphics card allowed me to play the majority of games in Full HD, from Shadow of the Tomb Raider to Dirt Rally. However, frame rate performance for AAA titles was less than ideal – unless you sacrifice texture quality by lowering the graphics preset options. 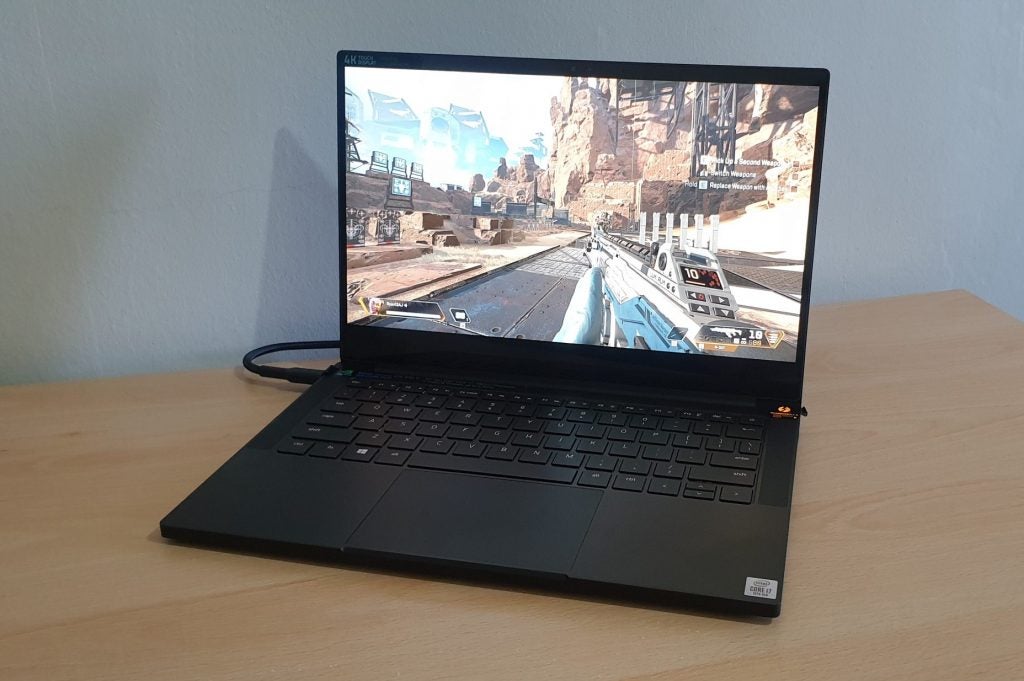 For playing the likes of Fortnite, Apex Legends and Rocket League, the Razer Blade Stealth 2020 feels like the ideal gaming Ultrabook, so long as you don’t want sky-high frame rates for competitive play. But that US price isn’t cheap; I’m hoping for more competitive pricing along these shores, especially considering the launch of the rival Asus ROG Zephyrus G14.

With an Intel Core i7-1065G7 processor, the Razer Blade Stealth offers superb CPU performance. Basic tasks such as web browsing (with multiple tabs open) and video streaming can be achieved with nippy speeds. That said, the release of AMD’s Ryzen 4000 has recently made Intel’s chip less impressive comparatively.

The 512GB PCle NVMe SSD is pleasingly speedy, though, with some of the quickest scores I’ve seen from a gaming Ultrabook. You’ll have no issues saving and loading data with this system. In addition, the M.2 SSD can be upgraded if needed, which will be handy for those who think the 512GB capacity isn’t sufficient for their needs.

In our initial tests of the Razer Blade Stealth 2020, we also assessed its battery life. While I won’t be publishing exact figures here since this is just a pre-production model, it does appear that the 4K resolution is having a big effect on the laptop’s stamina – which shouldn’t really be a surprise. 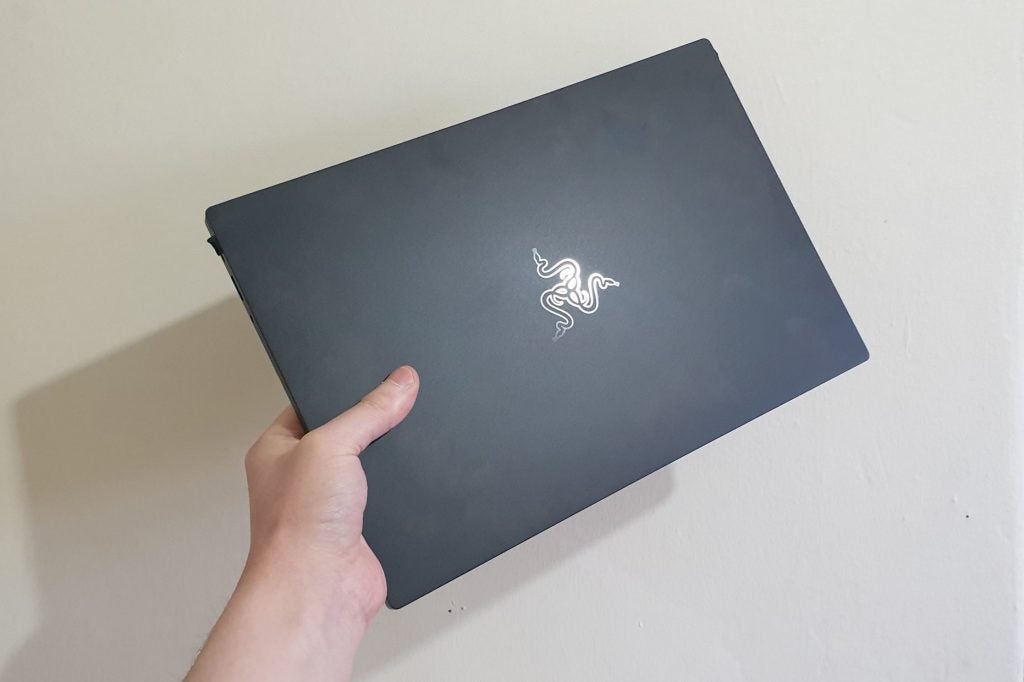 The Razer Blade 2020 looks to offer a great compromise for those who want a classy ultraportable laptop that offers the ability to game in downtime.

The introduction of the GTX 1650 Ti boosts gaming performance several notches without compromising on portability. Performance results (at least with the pre-production model) aren’t good enough for competitive or 4K gaming, but are decent enough to play the majority of games after some tweaks with the settings.

It’s impossible to say whether we’d recommend this gaming ultrabook right now though, since we’ve only tested a pre-production model that may not reflect the results of the final laptop. Plus, with no UK pricing available as yet, it’s hard to compare the Stealth 2020 with other laptops in an increasingly competitive market, especially since the launch of AMD’s Ryzen 4000 mobile processor and Asus’ ROG Zephyrus G14 gaming notebook.

For our final review and verdict, make sure to keep an eye on Trusted Reviews in the forthcoming weeks.