The Asus ROG Zephyrus G14 may not be the most powerful gaming laptop you can buy, but we reckon it's the best. Asus has perfectly balanced every feature, so there's no major weak point in sight. Even the design shows no sign of compromise, with a weight more akin to an ultrabook than your typical high-performance gaming portable. The incredibly good value price point is the final factor in confirming the Zephyrus G14 as the new golden standard for gaming laptops, with rivals such as Razer and Alienware needing significant strides to catch up.

The Asus ROG Zephyrus G14 is one of the best gaming laptops I’ve ever tested and is now my number one recommendation.

It’s one of the very first devices to feature AMD’s groundbreaking Ryzen 4000 processors. This is unquestionably a significant reason why I hold the Zephyrus G14 in such high regard, but to say it’s the sole factor would be incredibly unjust to Asus.

The Zephyrus G14 boasts a stellar thermal-efficient design, gorgeous 120Hz display and one of the best keyboards I’ve used on a portable. Plus, you’re getting Nvidia’s RTX 2060 Max-Q graphics card along for the ride, which is powerful enough to play any AAA PC game in Full HD and supports fancy features such as ray tracing and DLSS.

Despite flaunting high-end components, the Zephyrus G14 weighs just 1.6kg, which isn’t far from ultrabook territory. But most impressive of all, Asus has managed to keep the retail price relatively low. Combine all of this and you’ve got an outstanding gaming laptop with very few flaws.

With the Zephyrus G14, Asus has ensured a careful balance between gaming flair and universal appeal. It wouldn’t stick out awkwardly at an office but, simultaneously, can’t be accused of being bland thanks to an edgy font choice, lovely white lid and a sharp vent design seemingly plucked from a sports car.

No RGB lighting option here is a shame though, as the Zephyrus uses the same white backlight its non-gaming range flaunts. It’s not immediately obvious that this is a gaming laptop but I can absolutely appreciate there’s a market for those fed up of RGB glam. 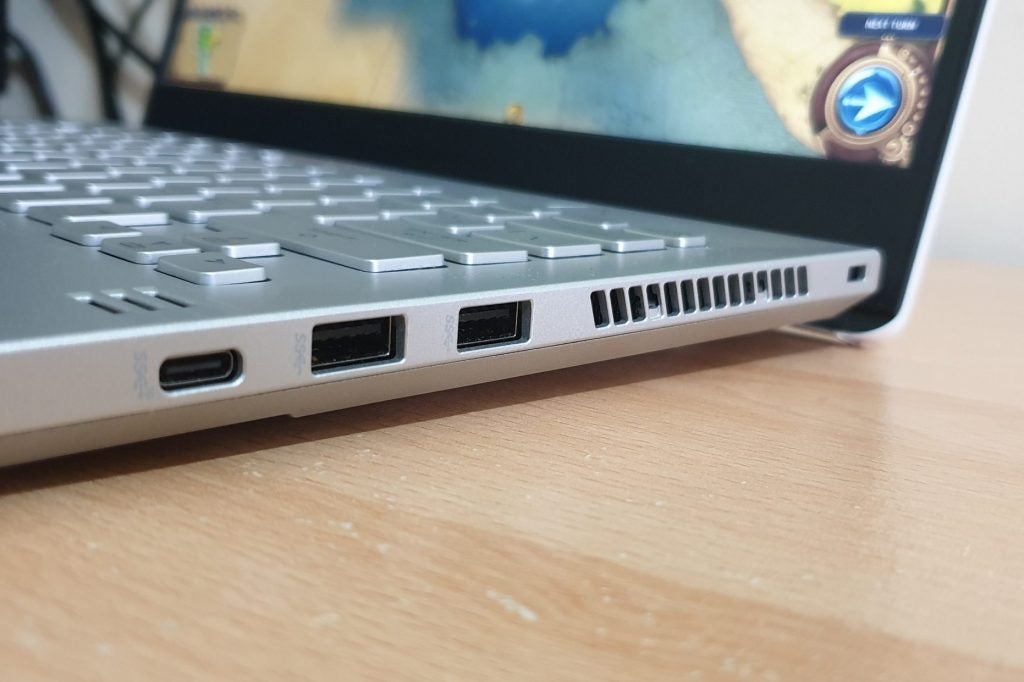 To make up for that, Asus provides the option of an LED display under the lid, which can be customised with your own pixel art, animations and notifications. It’s a lovely touch for gamers to add their own unique personalised design. I also give a lot of credit to Asus for making this optional, so those not bothered about flashy gimmicks can save some bucks.

The best design feature of the Zephyrus G14 is the ErgoLift hinge, which tilts the main chassis up off the desk to allow for improved airflow while also positioning the keyboard at a more comfortable angle. I’ve seen this before in other Asus laptops, but it feels a perfect match for the Zephyrus G14, helping to dispel heat so the chassis remains cool efficiently.

The side ports have also been shunted towards the front to make room for the vents. Asus hasn’t used that as an excuse to reduce the number of ports though, with 2x USB-C (one supporting DisplayPort and power delivery), 2x USB-A, HDMI and a headphone jack all starring. You could bemoan the lack of Ethernet but you can always buy an adapter – plus Wi-Fi 6 support is a great alternative. 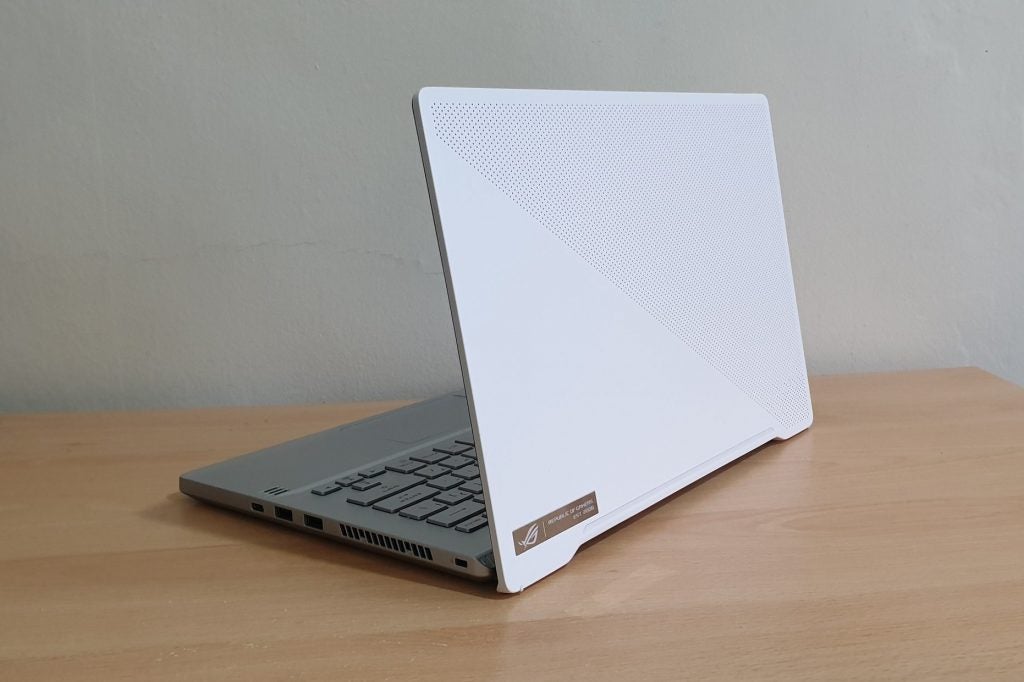 One of the biggest head-scratchers is how Asus has managed to make this gaming laptop weigh so little, at a dainty 1.6kg. For comparison, the Razer Blade 15 weighs 2.1kg. I can easily hold the Zephyrus G14 in one hand without straining and it’s slender too, measuring in at just 17.9mm thick.

Aside from a bizarre webcam omission (you can get an optional external webcam at checkout), it’s hard to see where Asus has cut corners, with the quad-speaker setup also excelling. Two tweeters can be found below the keyboard, firing right up at your face. You’ll also find a pair of woofers on the bottom of the laptop, although the ErgoLift design prevents them from being muffled by your desktop. Volume can be cranked up to a surprising decibel and it sounds great.

I’m a big fan of the Zephyrus G14 Chiclet keyboard. The ErgoLift design makes a noticeable difference in typing comfort but it’s the pleasingly deep 1.7mm travel of the keys that leaves the biggest impression.

This isn’t quite mechanical keyboard level, as the Zephyrus G14 lacks a crunchy click, but there’s still plenty feedback with each press to ensure comfort. Plus, you wouldn’t really want a laptop keyboard like this to be too noisy, as that would rule out use in an office or public area. 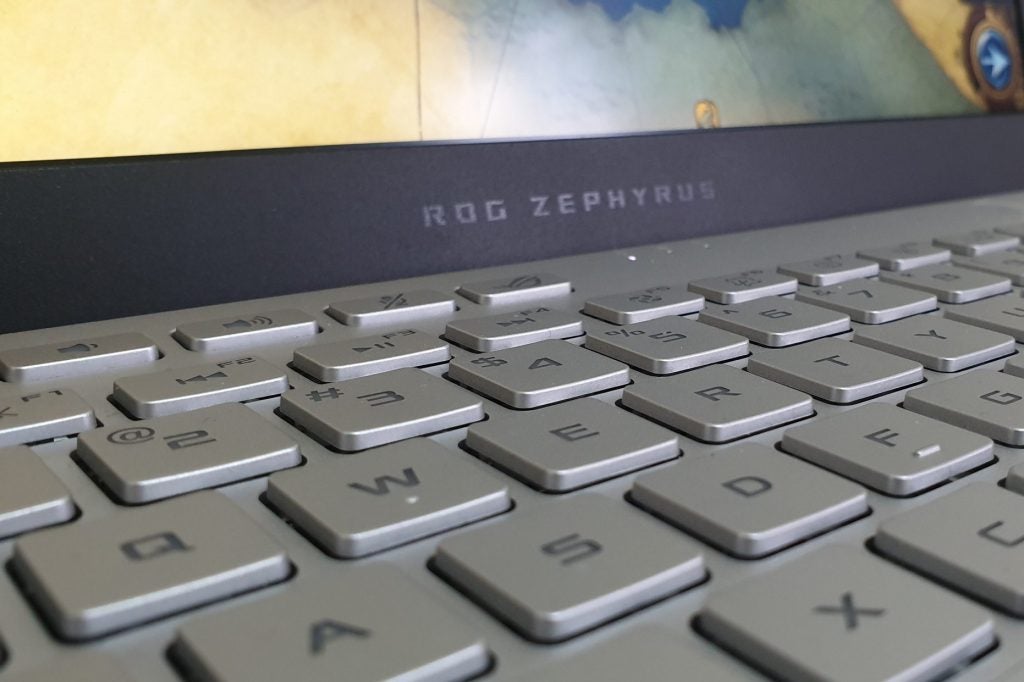 At the top of the keyboard, you’ll find dedicated hotkeys for volume, muting/enabling the microphone and a shortcut to Asus’ Armoury Crate where you can fiddle with performance settings. There are no macro keys here though, which is slightly disappointing.

My biggest issue with the keyboard is the tiny size of the arrow keys, proving a pain for games such as Civilization VI which demand frequent use. Meanwhile, the power button has been embedded with a responsive fingerprint sensor, making system logins much swifter. 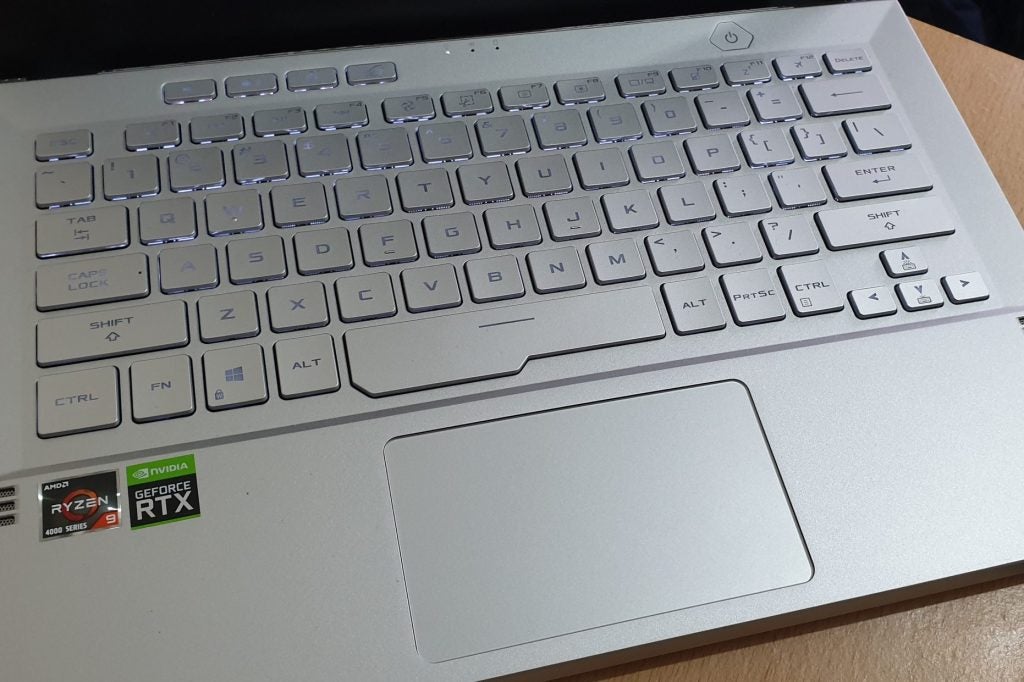 The technology here is impressive, with N-key rollover ensuring all inputs are registered in frantic firefights. At the same time, ROG Overstroke actuates each input earlier than usual to ensure a snappy performance.

Since the keyboard takes up so much space, the trackpad is slightly smaller than I’d like. It’s very responsive though, proving fine when playing shooters that demanded sharp responses. There’s enough travel and audible feedback to make both left and right clicks easily distinguishable too.

Gaming laptop manufacturers will sacrifice screen quality before anything else when trying to hammer down a price point. There’s no indication Asus has done that with the ROG Zephyrus G14, as the 14-inch Full HD panel offers natural, punchy colour.

Since this is an IPS panel, colours are accurate and vivid. Not only proving great for in-game visuals but also making the Zephyrus G14 a great Netflix machine, as the Tiger King’s big beasts were showcased in deadly detail. 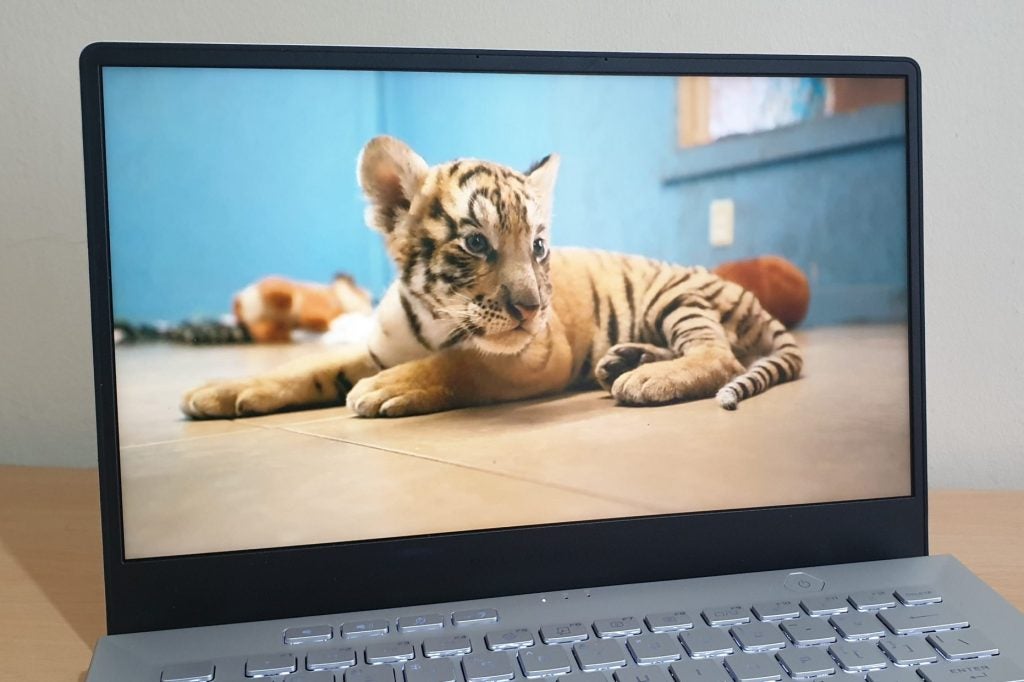 If I’m going to get nit-picky, the display is slightly warmer than I’d like. It’s not blatant but is noticeable when sat beside the colour-balanced Razer Blade Stealth.

The model I’m testing features a Full HD panel, but this can be upgraded to Quad HD at checkout. You can also get a refresh rate up to 120Hz. That may seem relatively low when rival laptops are now flaunting 300Hz alternatives but it’s more than fast enough for anyone outside competitive eSports players. AMD’s FreeSync technology is also supported, preventing screen tearing from jarring your view.

The Asus ROG Zephyrus G14 has multiple configurations available, with AMD’s Ryzen 9 4900HS processor and Nvidia’s RTX 2060 graphics card being the very best specs. The model I had in for review featured both of those components, setting the laptop price at £1799.

That price can fall all the way down to £999.99 if you’re happy to settle for a Ryzen 5-4600H processor and GTX 1650 graphics. While we weren’t able to test the base model, we did run multiple benchmark tests for the £1799 configuration.

The Zephyrus G14 marks the first time we have been able to test a Ryzen 4000 processor and the results did not disappoint. When left on standard ‘performance mode’, the Asus laptop comfortably stood toe to toe with larger and more expensive gaming rivals  – but when ‘Turbo’ mode was activated, the Zephyrus G14 obliterated the Razer Blade 15 and bested the HP Omen 15.

With the Ryzen processor boasting 16 cores, the laptop achieved exceptional results for multi-core performance. This means it can blast through creative tasks such as animation and video editing as well as CPU-demanding video games such as Total War: Warhammer 2 and Civilization VI.

The RTX 2060 graphics card performed admirably too, comparing impressively well to rival gaming laptops that housed the more powerful RTX 2070 GPU. The Zephyrus G14 rarely lagged behind more than 10fps for in-game benchmark tests and outperformed its rivals with titles that aren’t very GPU intensive such as Dirt Rally.

These specs become even more impressive when you factor in the cost and weight of the rival laptops: the Razer Blade 15 (RTX 2070) is priced at £1919 and weighs 2.15kg, while the Zephyrus G14 (RTX 2060) costs £1799 and weighs just 1.6kg. I’d personally be happy to trade in the minor frame rate advantage for a gaming laptop that costs less and is easier to carry around. Take note; we recorded all of these figures in ‘Turbo’ mode, which requires the laptop to be plugged into a power source.

One drawback to keep in mind is that the Zephyrus G14 gets really loud when gaming, especially in Turbo mode. There is a ‘Silent’ mode to counteract this but it will drop the performance significantly.

Unfortunately, the Zephyrus G14 SSD performance is underwhelming with a read speed of 1,927.16 MB/s and a write speed of 1,770.32 MB/s. These speeds mean it might take longer to save and load game data with the Zephyrus G14 than it would with one of the more premium alternatives. It’s disappointing, but you do get 1TB of storage capacity which is a very good compromise.

Gaming laptops are notoriously poor when it comes to battery life, often making them impractical for working on the go or watching Netflix on public transport. Thanks to the Ryzen 4000 processor’s incredible new efficiency though, the Zephyrus G14 has surprisingly good stamina. 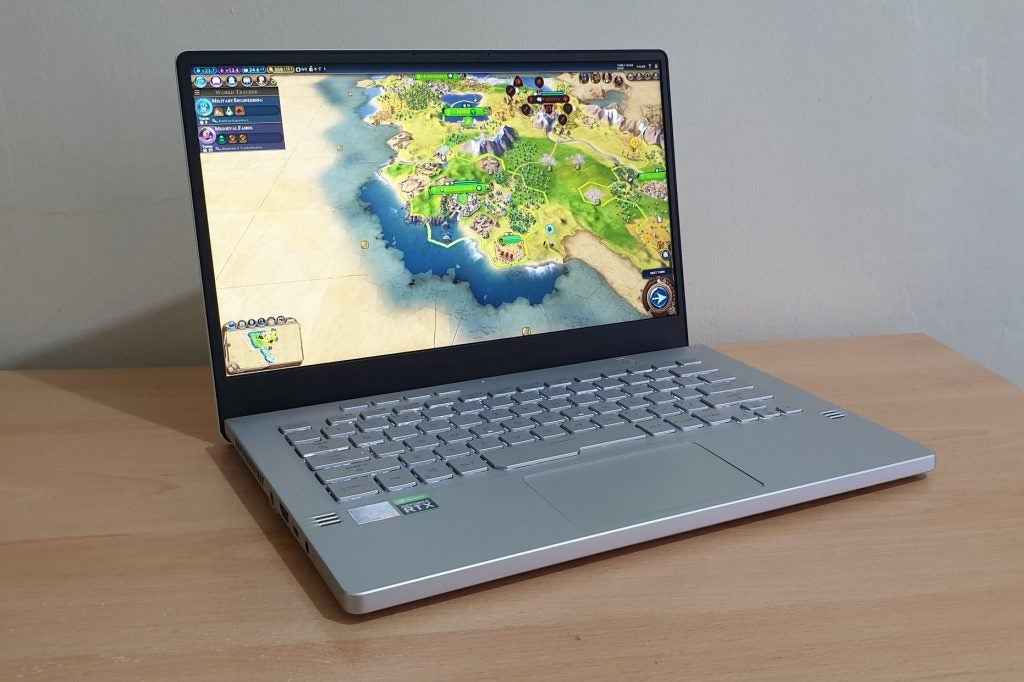 In our battery benchmark test, we reduced the screen brightness down to 50%, activated ‘Performance’ mode, left the keyboard backlight on, and then simulated web browsing and video streaming via Powermark until the battery tank was completely drained.

The Zephyrus G14 lasted six and a half hours, making it capable of surviving the majority of a workday – a remarkable result. For comparison, the Razer Blade 15 could only muster four hours in a similar test.

Should you buy the Asus ROG Zephyrus G14?

The Asus ROG Zephyrus G14 is an outstanding laptop. Not only is it powerful enough to run any PC game in Full HD at respectable frame rates but it also weighs very little and is incredibly affordable.

I’m very impressed by the £1799 model but more budget-minded gamers can get this laptop for as little as £999.99 if they’re content to opt for less powerful components. It’s a welcome return to normality in an age when gaming laptops are creeping over the £2000 bracket.

It’s admittedly not the flashiest of gaming laptops in terms of looks, with the lack of RGB lighting a specific disappointment. Still, I love the more original idea of the LED personalisation on the lid, even if you do have to pay extra for the privilege. Otherwise, it’s difficult to come up with more drawbacks. There are plenty more powerful gaming laptops but they all either cost more or are considerably heavier.

The Asus ROG Zephyrus G14 feels like an uncompromising full package; it’s powerful, hardly weighs a thing, has a gorgeous screen, boasts decent battery life and isn’t too expensive. If you’re looking to buy a gaming laptop right now, this is our top recommendation.