The Intel 10th Gen H-Series mobile processors have finally been revealed in detail, which looks to kickstart a new wave of ultra-powerful laptops.

With AMD only recently releasing its Ryzen 4000 H-Series mobile processors, the competition in the high-performance laptop sector is going to be fierce.

Which is best for you? While we’re yet to test any laptop with Intel’s 10th Gen H-Series processor, we’ve got all the details below, including specs, features and what laptops are expected to house it.

What is Intel 10th Gen H-Series?

The Intel 10th Gen H-Series mobile processors are the latest wave of Intel’s CPU chips intended for high-performance laptops. These can typically be found in the likes of gaming, creative and workstation systems.

With the new 10th Generation, Intel is introducing even higher frequency speeds, as well as support for the likes of Thunderbolt 3 and Wi-Fi 6.

Intel has confirmed it will launch six different SKUs for its new H-Series lineup, with the most powerful seeing frequency speeds climb up to a dazzling 5.3GHz, outstripping the Ryzen 4000 processor’s peak frequencies by quite a distance.

However, AMD’s Ryzen 4000 laptop processors excel at multi-core performance, enabling compact designs and feature a powerful integrated graphics engine, so it remains to be seen whether Intel has the overall advantage.

Intel 10th Gen H-Series release date  – When will they be available?

Intel gave no indication of when we can expect to see laptops landing in stores that feature the Intel 10th Gen H-Series processors, but it’s likely to be very soon.

Intel 10th Gen H-Series price – How much will it cost?

Intel’s 10th Gen H-Series processors won’t be available to buy individually as they’ll be integrated into laptops from other manufacturers. It will be up to those manufacturers to decide on the price.

However, Intel chips are traditionally more expensive than AMD counterparts. With AMD making large strides in terms of performance recently, it’s unknown whether that will remain the case during this new generation.

Intel made one thing clear during its 10th Gen H-Series processor presentation: it’s doubling down on frequency speeds.

Four of the six announced H-Series chips boast peak frequency speeds of 5.0GHz or more. That’s in stark contrast to AMD’s offering, with the peak boosted frequency speeds for the Ryzen 4000 range maxing out at 4.4GHz.

However, Intel fans may be disappointed by the core and thread counts here, as only the two top-end mobile processors see an 8-core and 16-thread combo. AMD reaches that magic number with all but one of its H-Series mobile processors, giving it the advantage for multi-core performance which is important for multi-tasking and running complex creative applications.

How powerful are Intel’s new H-Series laptop processors? It’s difficult to say without testing ourselves but those boosted frequencies will likely result in improved gaming performance.

Intel stressed during a presentation that most video games benefit more from single-core frequency speeds than multi-core performance, which would potentially (on paper at least) give the company an advantage when it comes to gaming.

But as AMD recently showed with the Asus ROG Zephyrus G14, the Ryzen 4000 mobile chips can achieve competitive processing power in compact and lightweight gaming laptops. It remains to be seen whether Intel can do the same, especially since its new H-Series processors are running on the 14-nanometre Comet Lake architecture. 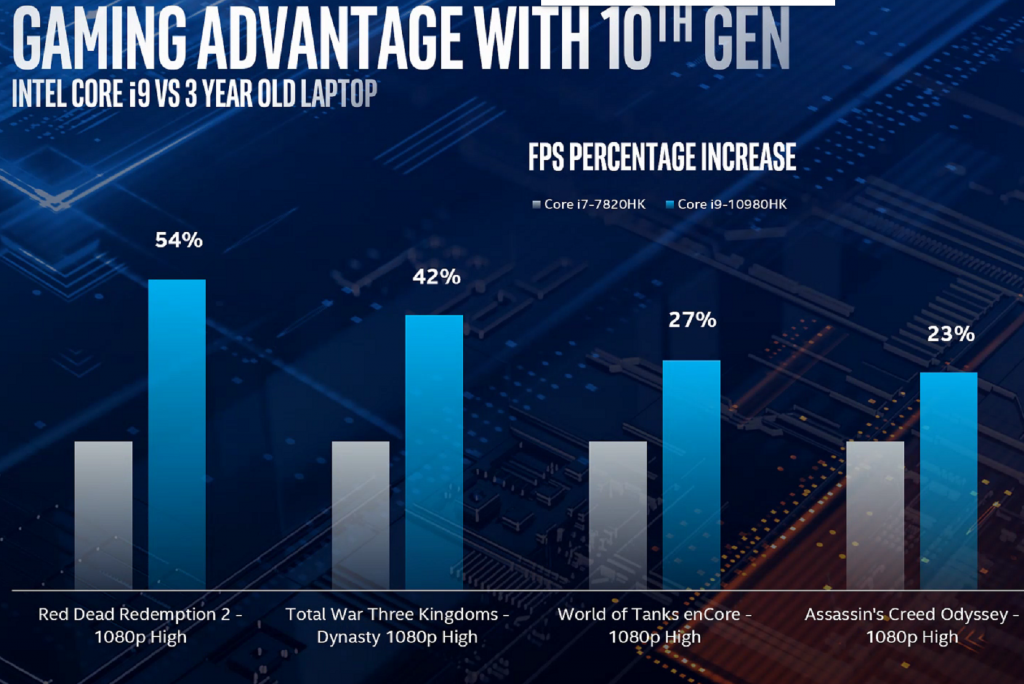 Using its 7th Gen H-Series mobile processors for comparison rather than the more recent 9th Gen counterparts is admittedly a strange decision by Intel. However, I can appreciate the reasoning that laptop owners don’t typically upgrade for at least three years after purchase. Still, using old comparative data makes the performance difference far less impressive.

In terms of performance for creative applications, you’d assume Ryzen 4000 has the edge thanks to having more chips with eight cores. That said, it’s impossible to know for sure, as Intel also confirmed it is working closely with the likes of Adobe and PhotoDirector in order to optimise performance.

You’ll have to wait until we start testing laptops with H-Series processors until you can get a proper idea of the performance.

By jumping to 10th Generation, Intel’s new H-Series mobile processors don’t just benefit from a performance boost but are also treated to a slew of new features.

Support for Wi-Fi 6 is one of the most noticeable, allowing for speedier wireless network connections with lower latency. You’ll need a compatible Wi-Fi 6 router to benefit from these speeds but there’s no question this is the future of wireless internet connectivity.

Thunderbolt 3 support was also confirmed, which is the latest and speediest USB connection format currently available, with a supposed 4x more bandwidth than USB 3.1. Data transfers are made speedier by this technology and it also makes it possible to connect up to compatible displays.

Intel also confirmed its 10th Gen H-Series processors would support up to 128GB DDR4 RAM and up to 40 platform PCIe lanes, while also being optimised for the latest discrete graphics cards. The latter point is not to be undervalued, especially with Nvidia recently launching its RTX Super GPUS for laptops.

Intel has confirmed there will be over 100 products featuring its new H-Series processors, including more than 30 designs that are less than 20mm thick.

So far, we have had the following laptops confirmed to feature Intel’s 10th Gen H-Series processor:

Many more are expected to be announced soon too, so keep an eye on Trusted Reviews for the latest developments.