The personal navigation device, or PND, was originally conceived as a convenient little gadget you could slip in a bag or even a jacket pocket, making it easy to move from car to car. But Mio’s new Navman Spirit V735 TV appears to have forgotten this important characteristic. Sporting a 7in widescreen, it’s one of the largest car navigation devices we’ve seen, even if it’s still relatively slim.


The reason for the ballooning in proportions is because the V735 has a special party trick. Lurking inside is a digital TV tuner, enabling you to watch Freeview programmes in the car. Naturally, this would be a crazy thing to do when driving, and Mio puts up a warning message every time you call up the TV function to ensure you realise this. When stationary, you can just press okay and start watching. But there’s also a checkbox, and if you don’t tick this the screen will go blank above 5mph. 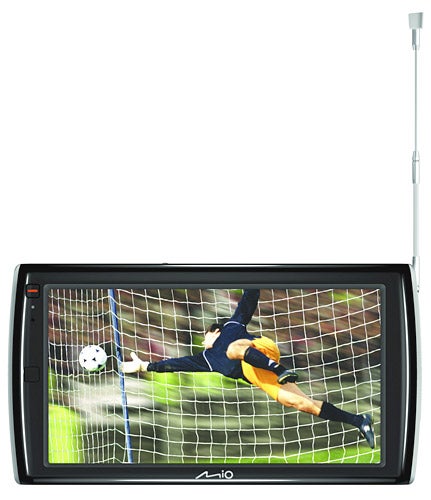 We still think some people will be stupid enough to ignore these messages and watch whilst driving. But then some people are also stupid enough to send texts when driving, operate a car when drunk, or tailgate on motorways in the pouring rain. So you really can’t prevent some people exhibiting criminal levels of poor judgement. Whilst the potential is there for dangerous distraction, Mio has made a reasonable effort to guard against it.


Since the V735 is a lot larger and heavier than most sat-navs, it comes with a meatier screen attachment. This is a fully articulated arm with an industrial-strength suction cup on the end. It should be possible to find a comfortable setup in most vehicles, even trucks, caravans or minivans. 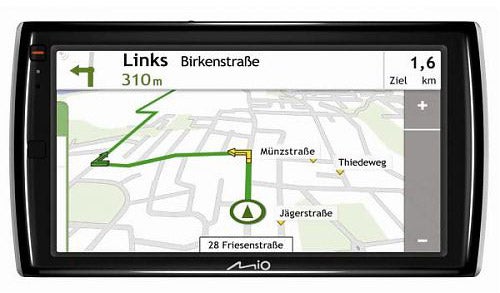 There’s a small aerial built in, but we found this essentially useless. Fortunately, an external aerial is supplied as well, which can be attached to a window using suckers. This is much more effective, and in our suburban London test location the Mio picked up the usual array of Freeview channels, displaying these with only infrequent artefacts. However, the usual caveats about digital TV reception apply. Aerial placement has a major effect on reception, and this could make some TV journeys frustrating as the signal strength varies with vehicle position.

A mono speaker is built in, and in a stationary vehicle this is perfectly adequate for hearing the TV audio. However, it will be a little quiet at full pelt down a motorway in some vehicles. There is an audio output jack on the V735, but annoyingly it’s 2.5mm in size, so regular headphones will require an adapter. Alternatively, the built-in FM transmitter can be used to pipe the sound output to the car stereo for far superior levels of volume. Overall, the V735 is a competent travel television, and there’s a remote control in the box, although our early sample didn’t include this. 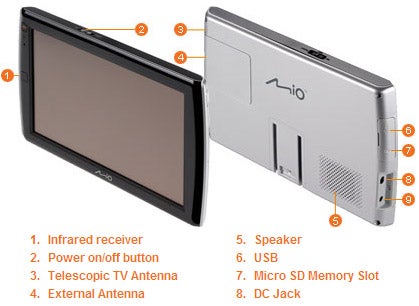 Other than the TV functionality, the V735 has basically the same sat-nav features as the more budget-oriented Navman Spirit 300. It uses the iPhone-alike Spirit interface Mio co-developed with its Navman subsidiary, and fortunately includes the tweaks we first saw in the Spirit 300. So instead of menus that glide around with minds of their own, there are scroll arrows for much more user control. We found the V735 a little more sluggish and picky about where you place your fingers than the 300, but it was still perfectly usable. 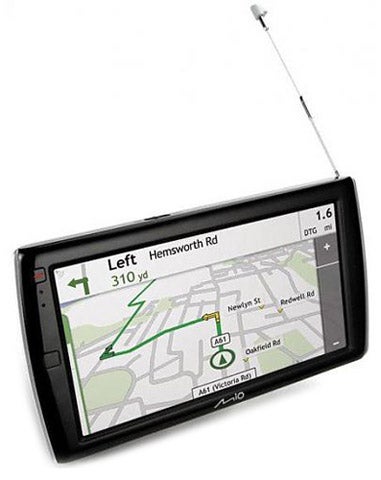 Maps of Western Europe are included covering 23 countries. One of the best features introduced with Spirit is keyword searching, so you only need partial address information to find a destination. This is particularly handy if you know the road name but not the exact city or town it’s in. But if you do know the full address the usual options are there, including finding a destination by postcode alone.


The V735 also includes the Travel Book added with the first members of the Navman Spirit range. This provides tourist information from WCities. By default, the city guides for London, Paris and Rome are included, but more can be downloaded to the device using the MioMore Desktop 2 PC software. The Travel Book is linked into the POI database, so you can navigate to Travel Book entries, and find detailed descriptions of some POIs.

On a more everyday level, the V735 includes a safety camera database and can be set to warn you whenever you exceed the speed limit. Lane Assistance is available, with 3D Junction View. This pops up a realistic three-dimensional image of an approaching multi-lane motorway interchange, showing which carriageway to be in. Virtually every sat-nav now offers this, so not having it would actually be more noteworthy. There’s even RDS-TMC traffic built in, with updates providing the option to reroute if there is a severe jam on your current route. This wasn’t functioning in our early sample, but previous experiences with other Mio devices have shown its RDS-TMC implementation to be effective. 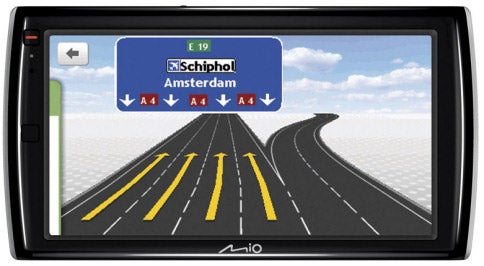 Although the screen is primarily meant for the TV viewing, it pays dividends when navigating too. The Spirit interface already sports a very clear map view, and on a 7in screen it’s very easy to read indeed, although only if you are looking straight at the device. The only display element obscuring the map is the bar along the top telling you the next turning and its road name, with a corner rectangle providing your choice of information such as ETA, distance to destination, or current time. On a display this big, however, Spirit’s Spartan approach almost seems a waste of screen real estate.


At first glance, Mio’s Navman Spirit V735 TV could seem like a desperate attempt to grab headlines, or even a potentially dangerous new way for drivers to distract their attention from the road. But it would make a lot of sense for some types of traveller. If you’re off on holiday in your camper van, it will help you get to your destination and then provide some evening or rainy-day entertainment when you get there. Best of all, it costs under £300, which is relatively competitive for a premium widescreen sat-nav with European maps and TMC traffic – and that’s before you even consider the massive display and built-in TV. So whilst it’s not going to be an ideal general-purpose personal navigation device, it’s great value if you’re after a portable digital TV as well.