A few months ago I was coming back from a press trip with Intel in China when I had the unusual fortune of being upgraded to business class. There was a bit of a mix up with my meal and by way of compensation, Air China were kind enough to allow me to walk upstairs on an aeroplane for the first, and depressingly, possibly the last, time. What I noticed as I looked around after I settled into my wonderfully large seat was how odd everyone was. There were people walking round in bare feet, some covered with makeup, and people who just looked eccentric, probably because they could afford to be. 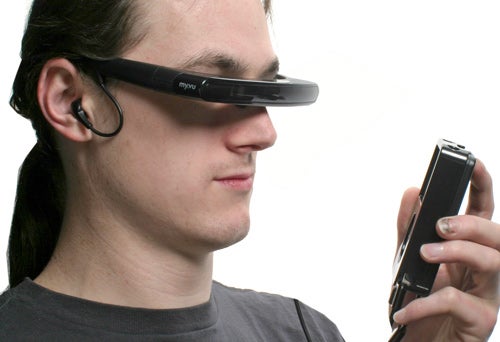 It’s possibly only in this kind of environment that I probably would feel quite comfortable taking out something like as quirky as Myvu’s Personal Media Viewer. This is a set of video glasses for the iPod video (30GB, 60GB, 80GB) that gives the impression of a large TV screen hovering somewhere beyond the end of your nose. I’ve seen devices such as this before to provide so called 3D gaming on the PC, and what they’ve all had in common was that were all pretty crap. Even so, when a press release popped into my inbox announcing the arrival of these in the UK iTunes store, I knew I had to give them a go. It turns out that the US has been enjoying these for about a year, but for some reason it’s taken this long to reach European shores. 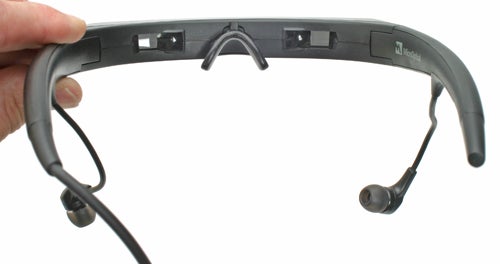 As you can see the design comes straight from the Geordi LaForge school of fashion – though if you’re going to make a pair of video glasses that’s fairly inevitable. They won’t let you view see the whole of the electromagnetic spectrum, but they will let you view videos on your iPod. Each eye contains an LCD with a 320 x 240 resolution that matches the 4:3 shape of the iPod display. The LCDs are 24-bit colour and work at 50 or 60Hz, for NTSC or PAL content. It’s a shame the resolution isn’t higher – after all the iPod can output up to 640 x 480 and that’s the res of the content on the iTunes store.

MicroOptical hasn’t gone for a total immersion experience – the LCDs are in a relatively narrow strip, so by looking up and down you can see the outside world. What’s more there are small windows to each side of the LCD so you see what’s going on either side of you too. The box actually shows someone walking the street while wearing these – quite aside from the not insignificant issue of what you’d look like I have to wonder what would be so important that you have to watch it while walking.

The iPod slips into a cradle with slots for the 30GB version and the thicker 60GB and 80GB versions. A clip is included so you can hang it off your belt if you wish. This contains a 1,440mAh Lithium-Ion battery that according to the manual will give you up to eight hours of battery life, though it says six hours on the box. I have to admit that I simply didn’t have the time to get through that much movie viewing to test that claim – I wish I did! But there’s a button on the back that when pressed illuminates four small lights to show you how much juice is left. After a good couple of hours of intermittent viewing only the first light began to fade, which would fit with the eight hour claim. That kind of battery life is impressive though and means you could get through two to three movies before this thing would run out. 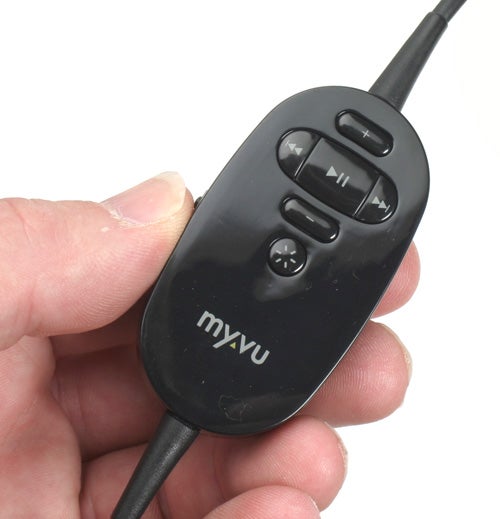 You also get the choice of watching off the mains, with a wall charger included, as well as a car adaptor as well as a very nice zipped hard case to put it all in. The power from the cradle plugs into the connector at the base of the iPod and the Myvu glasses plug into the top of the cradle. This connector is the same as the one iPod, so you can just plug the glasses straight in and power them directly from the iPod battery. This is good news as once you’ve used the power up in your cradle you can just carry on watching. Hopefully not in one sitting though. 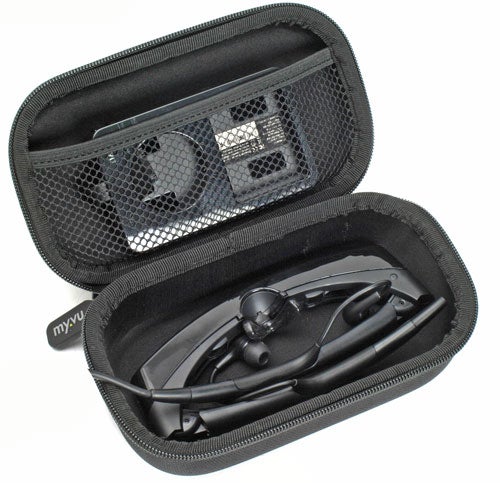 The glasses themselves are quite chunky but weigh only 75g, which isn’t too bad. MicroOptical has put in some effort at enabling you to customise the viewer to make it as comfortable as possible. There are three nosepieces included in the box, but I have to admit I couldn’t get the one that was attached off to swap them out. Instructions are provided and despite following them I could see that I was starting to break the piece attached so I left it where it was. 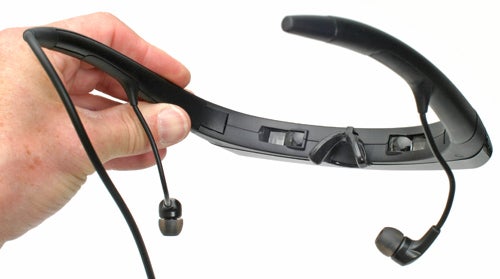 There are also three sets of ear buds provided to attach to the in ear headphones that are physically attached to the back of the frames – you can’ use your own headphones. I’m not a fan of these types of headphones and have frequently been accused of having mutant ears by Riyad. The default mid-sized ones were no use at all, but the smaller ones were better – I managed to get the right ear in, but the left one just kept falling out. It’s not just me though, my wife gave them a try and the same happened to her.

Along the cable cord is a rather overlarge in-line controller for volume, Play/Pause. There’s also a mode button that switches between three gamma levels for different environments, and if you hold it down and press the arrows you can adjust contrast and brightness too. 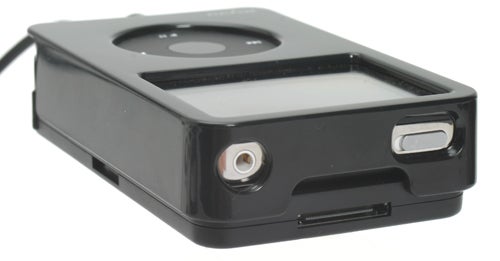 So what’s it actually like to use? I was expecting it to be very uncomfortable and for the display to be fairly pants, but I was quite surprised to find that it was not as bad as I feared. MicroOptical claim that this is equivalent to a 27in TV at two metres, so effectively you’re watching 320 x 240 on a large TV, and quite frankly that’s what it looks like – it’s grainy and not that sharp – it’s not exactly HD.


Even worse are the headphones, which are almost painful to wear. The sound quality is also very harsh – I longed for the warmth and depth of my not expensive Koss Porta Pro’s. No luck here, you’re stuck with these ill-fitting, poor sounding, uncomfortable nibs. 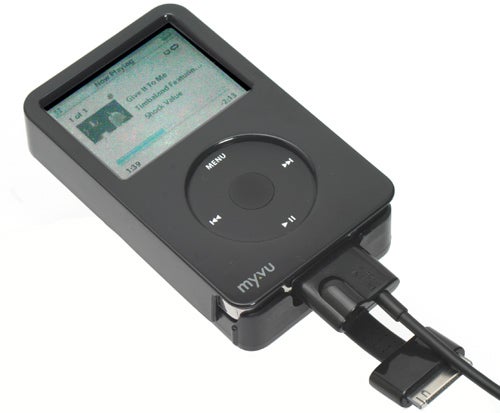 I will admit that once I had jammed them in my ears and sat down on the sofa to watch the movie 300 I was quickly drawn into the movie and became less conscious I was wearing them. I’m not certain though I could have the guts to pull them out on a crowded train – you might not be able to see the odd stares you’d get but you’d probably be able to feel them. The only situation I might use them is sitting in the garden, or on a (private) beach where I might appreciate not having to hold the iPod. Or on that business class seat, where everyone’s a bit wacky.


The concept either appeals to you or it doesn’t. Have we gone so far that we even need personalised video? The box also shows two people, presumably siblings, sitting in a car wearing them. So not only do you not have to sit and listen to each other anymore, you don’t even have to look at each other.


In the end I enjoyed these as a wacky, out there gadget, but to be brutal, the picture’s not quite good enough, the headphones are uncomfortable and sound poor, and there’s just no getting away from the fact that you’ll look like a nutter. And you’ll have to pay £230 for the privilege.


If you really feel the need to watch video from your iPod in this manner, this will do the job, but I’m not convinced that this is a concept that many people will be brave enough to go for, at least at this price.