It's hard to find anything to truly dislike about Marshall's ANC headphones. Their sound is enjoyable and fairly well balanced; they look smart; plus the collapsible design makes them a good travel companion. Other similarly priced headphones offer better sound – but for those who like a fashion-conscious pair of headphones, the Monitor II ANC push the right buttons

As a brand, Marshall is best known for its rock heritage. Born almost 60 years ago, the Marshall design is so iconic you’ll certainly be able to identify one of its products in a lineup.

In recent years, the company has branched out from music amplification. Under the guidance of Swedish company Zound Industries, Marshall has produced wireless speakers and headphones that bear its name.

The Marshall Monitor II ANC are a pair of headphones that certainly know they’re trendy. They resist a splash of colour, though; aside from the Marshall logo and control knob, they’re decked head to toe in black.

Headphones with a black finish can look rather beige, for lack of a better word, but the Monitor II ANC’s rock ‘n’ roll aesthetic is immediately appealing. The ear cups are covered in a plastic hard shell; the earpads make use of a soft synthetic leather; plus the headband offers enough flex to suit different heads. 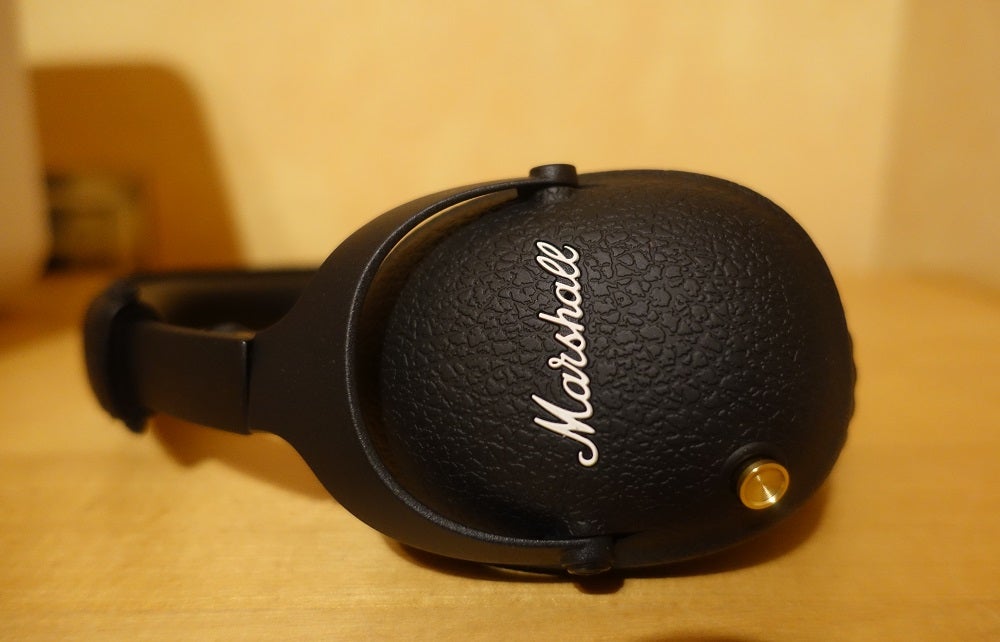 Aesthetically, they’re almost identical to the original pair, with the lack of gold highlights on the 3.5mm jack and adjustable headband the only noticeable difference. It gives the Monitor II ANC a less blingy, more grown-up look.

These headphones are compact and, although they weigh a surprising 320g, the Monitor II ANC fit well; they don’t feel particularly heavy on the head. Extended sessions did result in some minor discomfort around the earlobes, however. 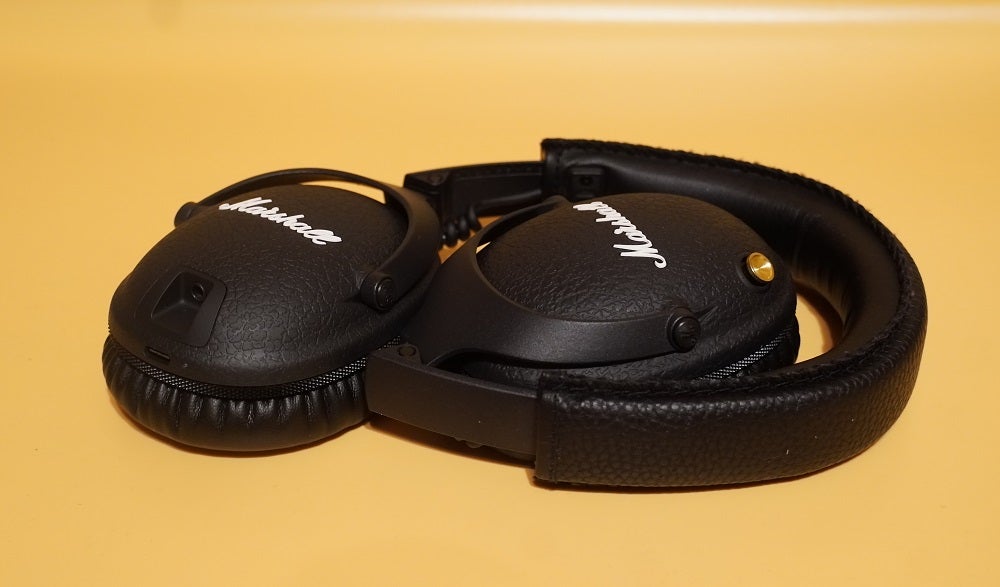 A rather considerate feature is the collapsible design, which allows the Monitor II ANC to be folded up and chucked into a bag. You can put them in a trouser pocket, but the bulge can look rather unseemly. If you’d rather avoid scrapes and scratches, there’s an attractive, denim-like canvas carry bag for the headphones and accompanying cables.

On the right ear cup is a multi-directional knob; a USB-C connection and 3.5mm jack sit on the left. On the back of the swivel hinge on the left ear cup is the ANC button, while on the right is what Marshall calls the “M” button. More on those later.

Marshall waded into the noise-cancelling arena with the MID ANC on-ears, but the Monitor II ANC are its most expensive headphones.

Which is why it’s pleasing to note that noise cancellation is impressive. Wearing them on a flight, the Monitor II ANC significantly reduced the hum of the plane and passenger noise. With a baby wailing in the seat behind, the headphones nullified the sound to the point where I forgot the baby was even there. The Monitor II ANC couldn’t have been treated to a better audition.

They performed just as well in office environments and around London, with distractions dimmed so I could focus on whatever I was listening to.

The ANC button on the Monitor II

ANC activates on startup and can be turned off by a long press on the ANC button. A tap of the button takes the listener into “Monitoring” mode, which is effective in filtering through ambient sound, mainly as pressing the button halts playback completely.

Located on the right ear cup is the control knob for playback, volume and track shuffling. I’ve been wary of fussy multi-directional controls in the past, one example being the Adidas RPT-01 (also by Zound Industries). The execution here proved more responsive and less frustrating. Hold it down for a few seconds to power on (or off), press down to stop (or start), flick up or down for volume, and move side-to-side to skip tracks. 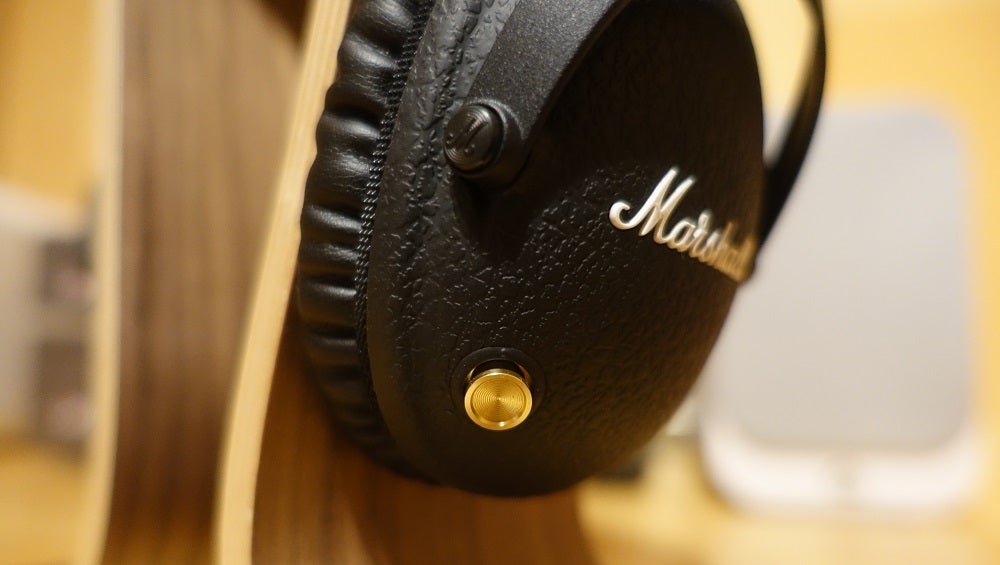 The Monitor II ANC have been optimised for Google Assistant. Open the GA app to register, and you can talk to GA by pressing the “M” button on the right swivel hinge. The M button is customisable and offers quick access to voice assistants or equaliser settings.

Marshall claims these headphones offer battery life up to 30 hours with active noise cancellation activated, which puts them among units such as the Sony WH-1000XM3 and B&W PX7. Turn ANC off and it’s 45 hours. A 15-minute top-up is enough for five hours, and charging to full battery takes two hours.

There’s a Marshall Bluetooth app, although the newer version will coincide with the Monitor II ANC release. Since it was still in test mode, I did experience some issues, such as not recognising the headphones. 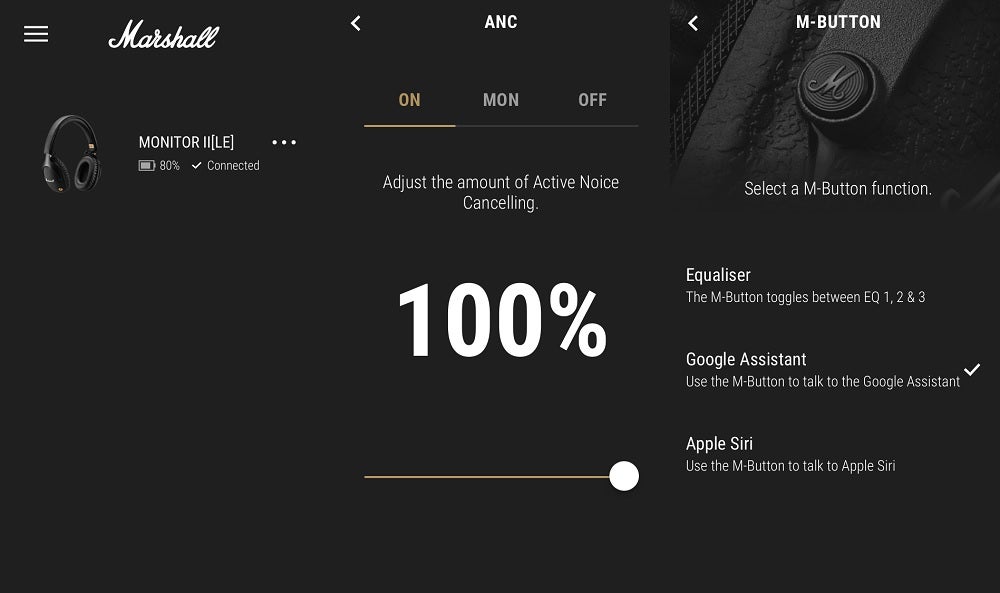 When working it’s an app (on iOS at least) that’s easy to use and swift to navigate. It offers the option to tweak to ANC and passthrough levels, customise the M-button function (Equaliser, Google Assistant and Siri), a choice between the Equaliser presets (or create your own) and an Auto-off timer. Battery life status can be viewed and the app will push updates over-the-air.

Bluetooth is 5.0 and wireless connectivity is the one feature that struggles. Walking through busy areas such as Canada Place in Canary Wharf, the Marshall’s signal strength became increasingly stuttery.

It’s a similar tale in busy transport terminals – and while not unexpected, it makes the signal strength of the Cleer FLOW II even more miraculous.

The Monitor II’s character is slightly tricky to get a handle on since no part of the frequency range stands out. Marshall claims the Monitor II ANC offer crisp treble, clean mids and solid bass – and that’s more or less what you get.

The Monitor II’s aren’t warm-sounding; they do feel lean in places. But, overall they strike a good balance. Feed them good-quality tracks and the Monitor II respond with a satisfying sense of clarity, detail and enjoyable dynamics. 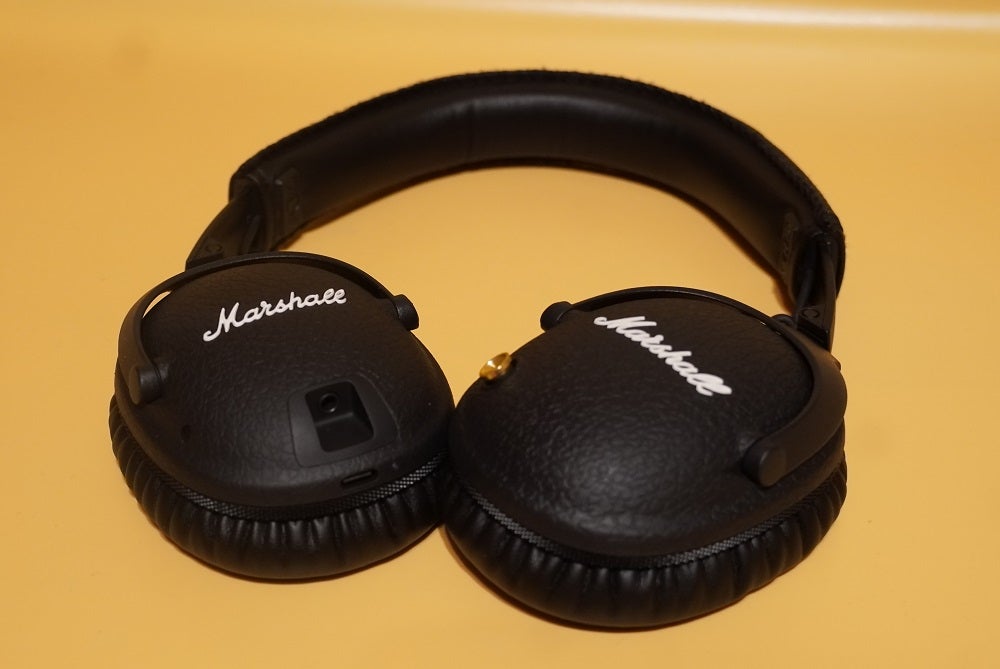 A Tidal stream of Kelis’ Get Along With You, the drum kick present throughout offers a slight hint of hardness, especially at full volume. A switch to a more complex track in Reminiscence Theory from the Solo: A Star Wars Story soundtrack, and the Marshalls keep up with the shifts in tempo with decent timing and an entertaining delivery that captures the track’s attack and propulsion.

The low-end gets a workout with Hudson Mohawke x Lunice’s Higher Ground from the TNGHT album. Bass flexes its muscles, but it isn’t as deep or as muscular as the Sony WH-1000XM3. The Monitor II ANC also leave the impression they could sift out more detail in the treble, with a soundstage that’s less spacious than competing sets. 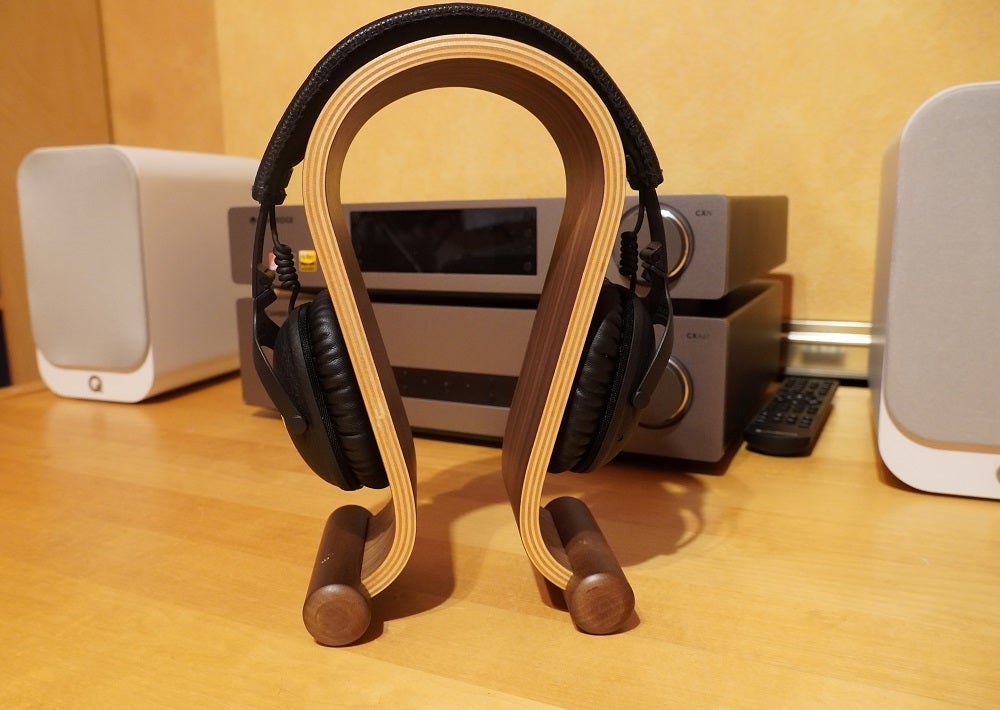 That said, I can’t say that I haven’t enjoyed listening to them. Vocals are conveyed with clarity, with mids engaged slightly higher with ANC turned on, making for an involving listen. Plus, there’s a good amount of flow to their energy.

A Tidal Master stream of Led Zeppelin’s Immigrant Song zips along enjoyably, and while there are  probably aspects I could point out – the Marshalls aren’t the most revealing or the richest-sounding pair – they make listening sessions less a chore and more fun.

Should you buy the Marshall Monitor II A.N.C?

The Marshalls are up against firm competition and stake their claim with impressive styling, great noise cancellation and enjoyable sound. Appropriately suited and booted with their rugged and collapsible design, they’re a good travel companion – and have I mentioned how sweet they look?

The Sony WH-1000XM3 carry more presence with a bigger sound, more emphatic bass and sweeter treble. They also match the Marshalls where it matters on the feature count and can be had for a similar price. Rumours of an incoming WH-1000XM4 may mean it’s best to hold off right now.

Another rival is the Cleer FLOW II. They’re stylish but not as compact as the Marshalls, and slightly less suitable for long listening sessions. Noise-cancelling performance is just as good, and the strength of their wireless connection is superior, with treble performance cleaner and more detailed.

That said, the Marshall Monitor II ANC court a favourable impression. It’s hard to think of anything truly unlikeable about them. Smart looks, great design and enjoyable sound, Marshall’s most expensive pair of headphones are its best yet.