Comfortable to wear, durable and includes features with accessibility in mind, the Adidas RPT-01 are a good pair of headphones for those who play sports. They can be a bit fussy and could use more finesse in terms of sound, but as an overall package they're an engaging pair of on-ear headphones

What are the Adidas RPT-01?

The RPT-01 on-ears present a collaboration between sportswear giant Adidas and Zound Industries, a Swedish-based company that works with brands such as Marshall and Urbanears to develop headphones and speakers.

As you can probably imagine with Adidas involvement these headphones are sports-focused, as showcased by their IPX4 rating, 40-hour battery life and build quality.

So for those looking for a pair of headphones specifically for use during sporting activity, the RPT-01 are worth investigating further.

Rugged is the first word that comes to mind on viewing the Adidas RPT-01. Made using a combination of plastic, nylon fabric and metal, the RPT-01 are lightweight yet durable; I wouldn’t fear throwing them into a gym bag worried that they might break. 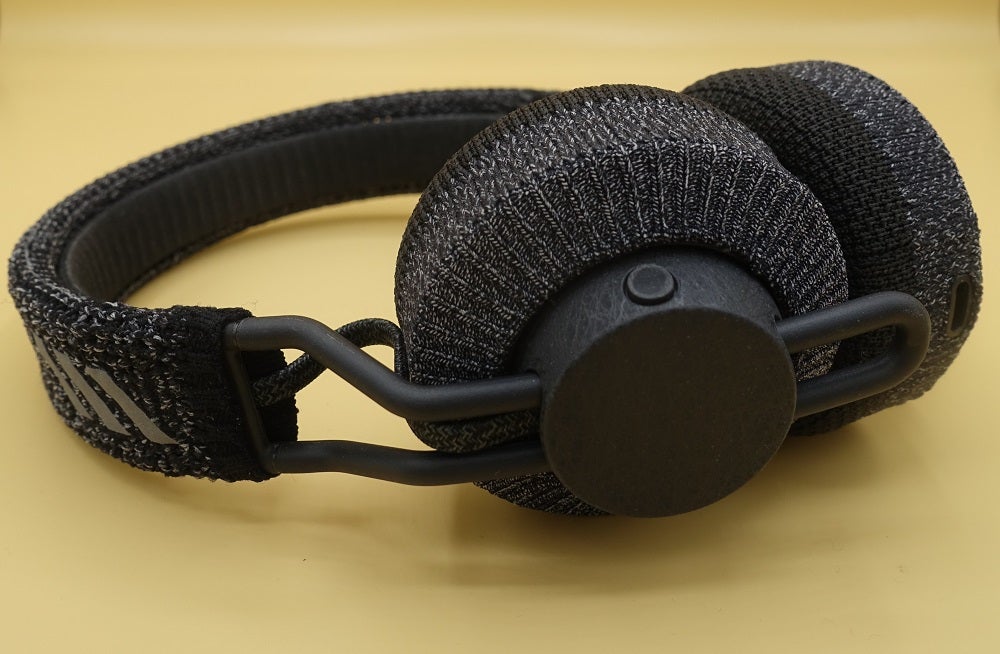 The IPX4 rating means they’re sweat- and water-resistant, and if the knitted headband and ear pad cushions become dirty, they can be removed and washed – a thoughtful touch.

They look good, too. The dark grey camouflage finish of this review sample – Night Grey and White versions are also available – along with the Adidas three stripes gives them a low-key but distinctive look. I can imagine this pair standing out against the bright shirts and football tops in which people tend to work out. 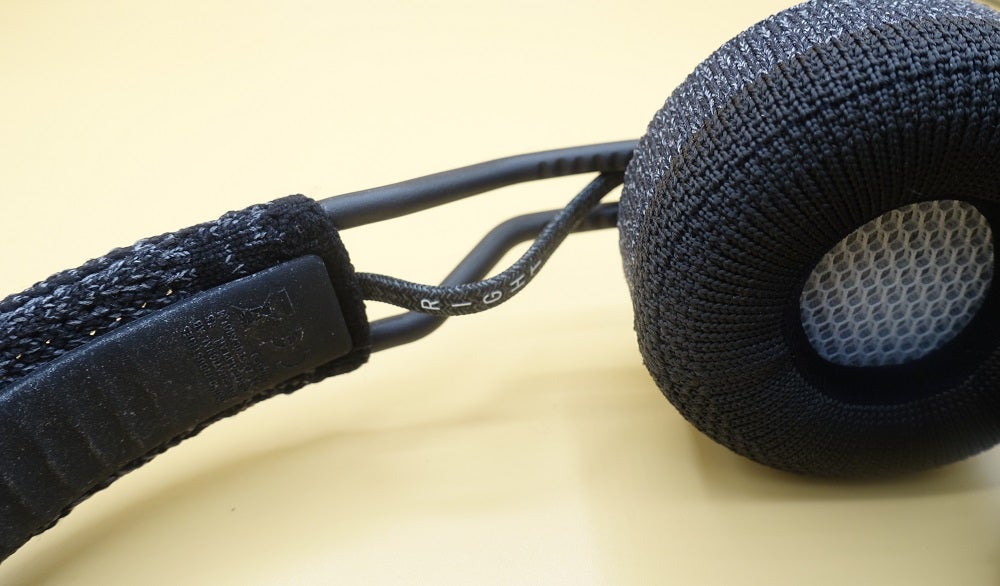 Little tabs indicate which is the left and right

The headband is adjustable and there are helpful indicators attached to the headphones that illustrate which side is right and left. And despite being quite bendy and flexible, the RPT-01 offer a tight and firm grip.

I found them to be comfortable enough to wear, but they did pinch my ears after prolonged periods – although I suffer that with nearly all on-ears I wear. The good news is that they stay put during workouts; whilst doing a set of abdominal crunches, they didn’t fly off my head once.

When it comes to features, the RPT-01 are pretty much of the moment, including Bluetooth 5 and USB-C charging.

They don’t have the quick-charging of the related FWD-01 in-ears, but it’s unlikely you’ll need such a facility anyway. With a battery life of 40+ hours, which, if the RPT-01 are used just for workouts, will see you through sessions into double figures – or more than a week, if you use them more often. Having used them over the past few weeks, battery is only down to 40%. To get back to full charge from zero takes around three hours.

Located on the right ear cup is a multi-directional knob for powering the RPT-01 on and off, pairing, volume control and playback. A long press turns them on or off, an even longer press puts them into pairing mode; a tap can stop or restart playback, a flick up or down manages volume, while side-to-side skips forward or backwards to the next track.

It’s a simple, effective approach that reduces the reliance on using your mobile device. I do find there’s an issue with placing so much emphasis on one button, since there are times where you think you’ve held it for long enough, but haven’t. Try to turn them off you could end up restarting a song. It’s a control method that you get used to, but can feel finicky at first.

On the left ear pad sits the Action button, which is neat in concept and execution. You can configure this button in the companion Adidas headphones app for actions that require a single, double or triple press. 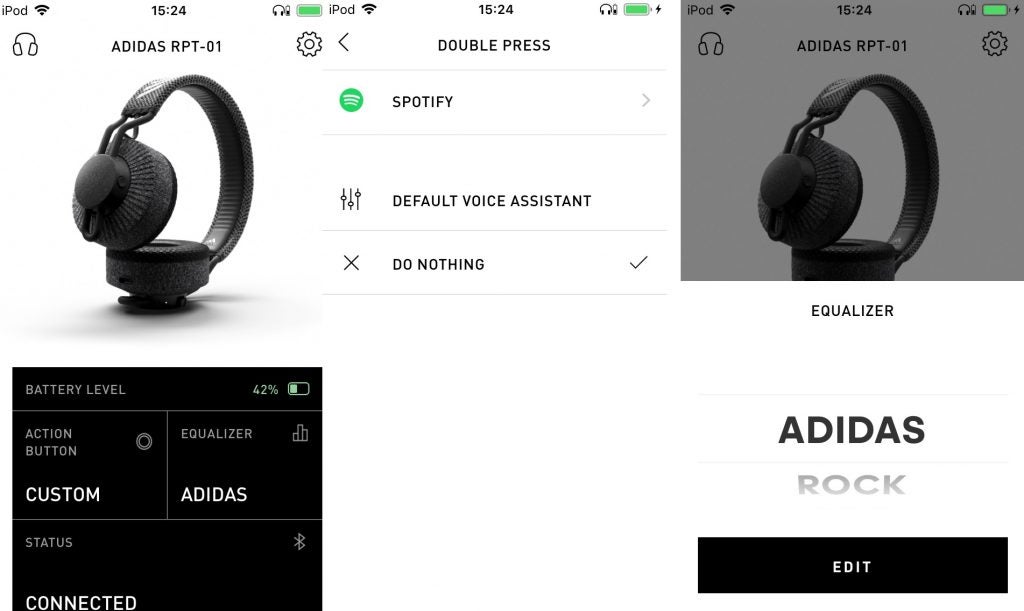 The default for a single press is bringing up the default voice assistant – although I couldn’t get Siri to appear on an iPod Touch – but the Action button can also be used to play content from Spotify once the apps have been connected together, whether that’s a specific artist, album or playlist. It’s another considerate touch, and means you can get into your music faster and more conveniently. The button could do with being raised up a bit more to make it easier to find, though.

The companion app is pretty straightforward and is available on Android and iOS. You’ll need it to pair during setup, but it also offers customisation to the aforementioned Action button, as well as a series of equalizer presets that can be tweaked from options such as Rock, Hip-Hop and Electronic.

Adidas RPT-01 performance — Could use more finesse, but a solid performer

In terms of sound, the RPT-01 put in a solid performance. There are areas that could do with some finesse, but in the main these are a decent-sounding pair of on-ears.

I put them up against the wired AKG Y50, just to get a sense of their character. A play of Electric Light Orchestra’s Mr Blue Sky shows there’s some detail missing in the mid-range and treble. 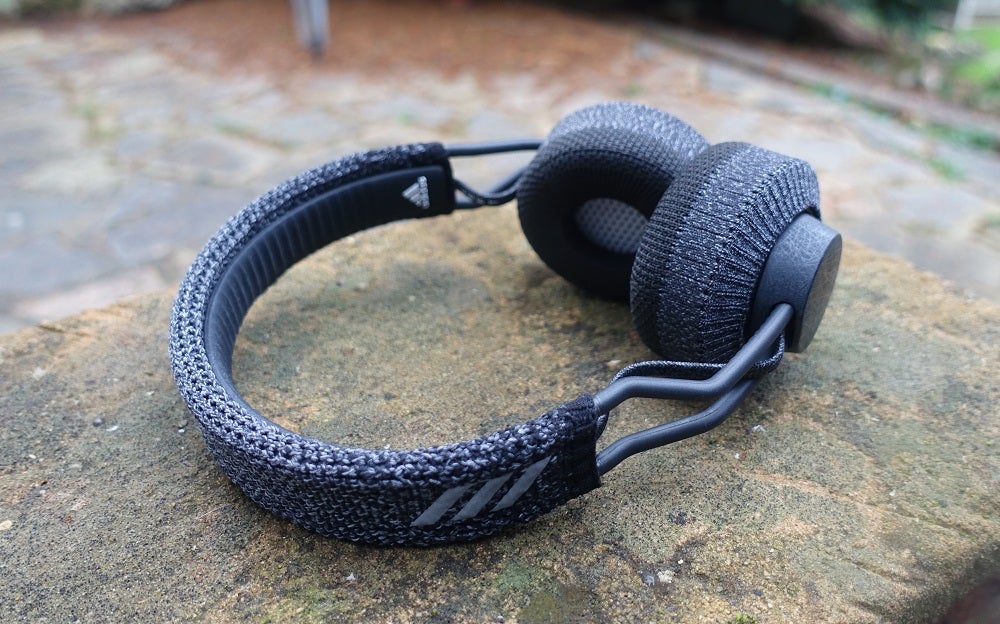 Packing 40mm drivers, the soundstage they create is smaller, too, but they are on-ears so that’s to be expected. In addition, a smaller soundstage isn’t necessarily a bad thing with the RPT-01, even if it means they’re lacking in scale. It has the effect of bringing the music closer and making it more immediate, with vocals pitched further forward. Compared to the AKG’s relaxed performance, the Adidas are more in your face, so to speak. 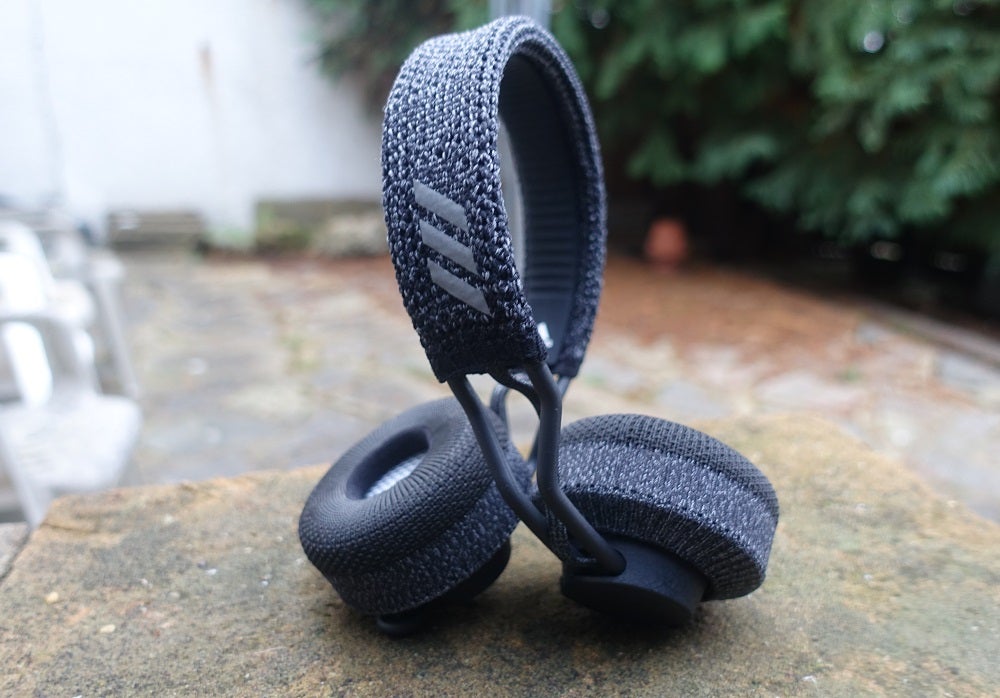 They’re not a particularly warm or energetic pair of headphones, the latter being something I expected from a set of fitness-orientated on-ears. They’re actually on the leaner side, lacking the smoothness of the Y50, but not to the point where they’re harsh-sounding. Bass is taut and solid, as shown in Lupe Fiasco’s The Coolest, while his lyrics come across with clarity.

I do wish there was more depth and separation to the soundstage, and dynamically they wring out a decent amount out of the highs, but leave with the sensation that there’s still more on the table. They’re not fatiguing in any sense, either, which is important whether they’re for use while working out or just general everyday use.

Should I buy the Adidas RPT-01?

If you’re of the sporting persuasion and in the market for a pair of fitness-focused headphones with decent sound, there’s no reason not to consider the Adidas RPT-01. They’re comfortable to wear, durable and have a novel control system – although it can be a little fussy at times.

The £140 price is something of a premium in my view, since I wouldn’t say they’re better-sounding than some headphones at that price.

However, for their thoughtful approach, long battery life and good, efficient design, the Adidas RPT-01 on-ears can hold their head high.