What are the Marshall Monitor Bluetooth headphones?

Marshall has been building a line of respectable headphones for some time now, branching out from its well-established position as a maker of top-quality guitar amps. And now, it’s gone and made its top-of-the-line Monitor headphones wireless.

It’s taken these impressive over-ear headphones four years to go cable-free, with the original wired pair launching back in 2013. Has it been worth the wait? And, at £219, is the wireless pair worth the extra £40 over the wired option?

Well, overall, yes. The Monitor Bluetooth, aside from cutting the cord, are essentially the same as their cabled predecessor, with the same robust design and impressive sound quality – although the enhanced treble may catch you off guard at first.

If you’re looking for a decent alternative to the bass-heavy Beats Solo Wireless range, and numerous other cans that have adopted the boosted low-end approach, Marshall might just have the answer even if they might not be the perfect headphones for everyone. 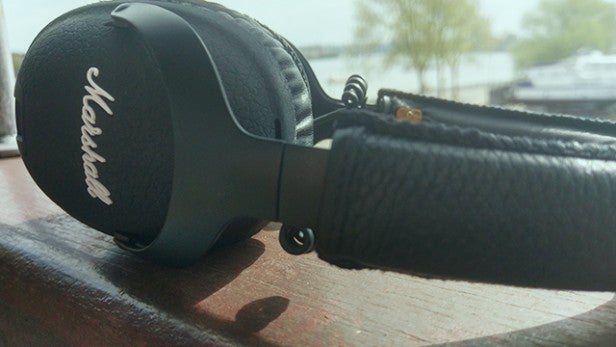 As with previous Marshall headphones, the Monitor Bluetooth have been designed to mimic the look of a classic Marshall amp cabinet. They’re all imitation black leather, with brass accents and, of course, that iconic white Marshall script across the earcups. Even the included cable for wired play and the wires that run from the headband to the earcups are coiled to evoke the look of a heavy-duty vintage guitar cable.

The ear cups themselves are of the over-ear variety, so isolation is decent, and they feature a leather-style texture finish on the plastic cups themselves. They’re also removable for maintenance, and sit on adjustable metal sidearms – painted black, naturally – which in turn sit on cast metal hinges so the pair can fold up for easy portability.

On the bottom of the left earcup you’ll find a gold multi-directional knob that lets you control your music and phone functions. It’s almost exactly the same as the mini control stick you’ll find on the company’s other headphones, such as the Marshall MID Bluetooth, and allows you to play/pause, skip forward and back a track, adjust the volume and answer, reject or end phone calls. It also turn the pair on and off with a long press. 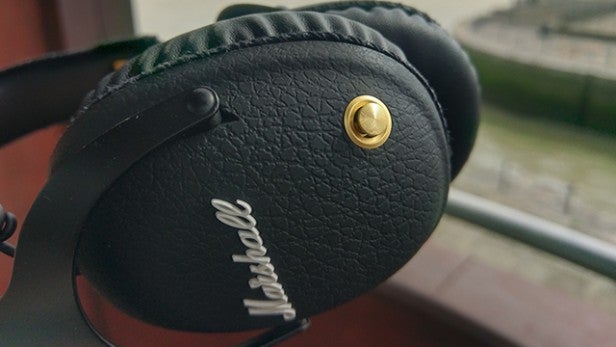 It’s an odd way to control the various functions, and although it suits the overall look of the pair, resembling the kind of switch you might use to switch channels on a Marshall amp, it is a tad fiddly, and seems like a fairly crude way of controlling things. Still, you get used to it the more you use it, and it’s by no means a big drawback – you’re at least getting a physical button rather than the kind of unreliable touch functions that feature on other sets.

Marshall has also thrown a 3.5mm socket into the mix, on the bottom of the right earcup alongside the Micro USB port. This allows you to listen through a wired connection using the bundled cable, which includes an inline mic (the cups themselves also have a less reliable but still usable built-in mic).

It also means, as with the Marshall MID, that another person can plug their headphones into the Monitor Bluetooth when you’re using them wirelessly, so you can share the music between two. Just make sure, if you want to stop using the battery life when you plug in the cable, that you turn the headphones off manually, as it doesn’t happen automatically for some reason.

In all, I found the Monitor Bluetooth to be perfectly comfortable at first, but any extended listening session will inevitably end with some strain on your temples. A couple of hours is about all you’ll be able to take from this pair before the discomfort becomes a bit much. That said, there’s no denying the build quality and attention to detail, which does as good a job as any other Marshall headphones at recalling the design of classic Marshall amps. 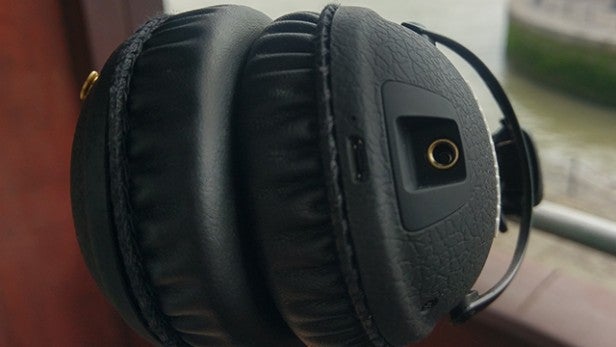 Holding down the control knob on the bottom of the earcup for five seconds turns the headphones on. The Monitor Bluetooth will automatically show up on your phone, tablet or laptop’s pairing menu, and it really is as simple as that. Just as it should be.

Once connected, you’ll be pleased to hear there’s support for Bluetooth aptX, which means the Monitor Bluetooth will play CD-quality audio if your Bluetooth connected device supports it, too. You’ll be able to wander a good 30 feet before the wireless connection starts to break down. I left my set connected to my laptop upstairs while I went downstairs, and the connection lasted most of the way, though once I got to the opposite end of the house on the ground floor I lost connection.

On the whole, though, the Bluetooth element works well, and I didn’t experience any drops in sound quality, as I have with cheaper headphones. 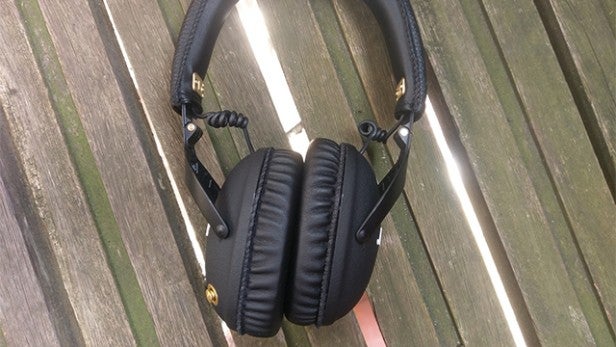 The Monitor Bluetooth make use of the older Micro USB standard – disappointingly USB-C is slow to be adopted on headphones even though more and more phones now use the connection. There’s no doubt this is a minor drawback, and considering Marshall promises a full 30 hours of life with each charge, it’s easily overlooked.

In my experience the headphones lasted a good 25 hours before running out of juice. That’s still a respectable battery life, and outdoes more expensive pairs such as the £330 Sony MDR-1000X and Bose QuietComfort 35 with their shared 20-hour battery life, although these do both have active noise cancelling as an additional power draw.

First off, it should be said that the bass response is good here. There’s no doubt Marshall has created a nicely sculpted low-end experience with the Monitor Bluetooth. Sub frequencies will hit your ear with a decent impact, and the bass doesn’t distort when you crank the volume.

As the pair are over-ear, isolation is also good, though the earcups might be a little small for some. There’s no noise-cancelling tech on board, but the phones do a good job of shutting out external sounds passively.

Now that’s out of the way, I was initially puzzled by the Monitor Bluetooth sound. Why? Well, Marshall has helpfully provided a graphic of an EQ on the box and its website to show you the type of sound you’ll get from its latest headphones. However, the EQ visualisation doesn’t necessarily match my impressions of the Monitor Bluetooth’s sound.

For instance, the bass frequencies are shown as heavily boosted, but they’re certainly nowhere near the kind of thing you’d hear on the Beats Solo Wireless 3. The bass response is great and not overpowering, but still not as deep as I expected. However, the treble is really quite crisp – never harsh but perhaps a little hard-edged.

I compared the Monitors to the Sennheiser Momentum 2.0, and the latter were noticeably less treble-defined, resulting in what I still think is a better overall sound. Sennheiser’s pair, which are actually going for about £20 cheaper than the Monitor Bluetooth (though, they don’t come with any wireless capabilities) seem to have the treble tones at just the right frequencies, with the Monitors seeming just a little too sharp to my ear.

It almost seems Marshall has decided to take the opposite approach to the good Dr and his bass-heavy Beats, as a sort of defiant sneer from the rock camp to the hip-hop sound of the Beats brand. 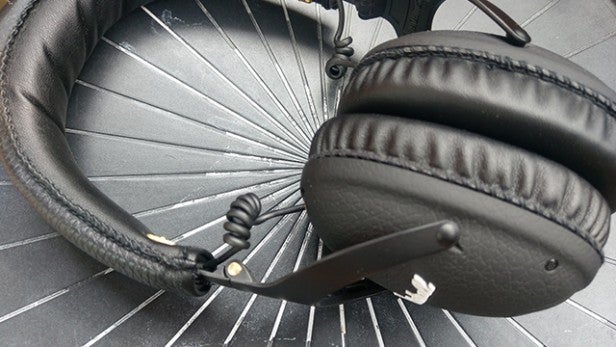 To be clear, the overall sound here is good. It’s clear, and although the bass doesn’t seem to be as boosted as some low-end fans might hope for, bass detail is actually quite good. The higher bass frequencies, in particular, sound nice and clear. Mids I noticed sometimes weren’t as full as I’d hoped. Father John Misty’s smooth croon on his latest offering wasn’t quite as rich and full as I’d heard through other sets (and I’d listened to it entirely too much), but this was a negligible drawback, and mostly down to the high mids being slightly too pushed by the Monitors, thanks to that crisp treble.

For the price, you get a really solid sound from the Monitor Bluetooth, but they definitely have a signature to them, so you shouldn’t be using these for any mixing purposes. It’s also worth noting that the Marshall MID Bluetooth offer similar audio quality and features for a full £50 less.

Should I buy the Marshall Monitor Bluetooth?

If you’re looking for clear audio quality and Bluetooth with aptX support, you can do a lot worse than the Marshall Monitor Bluetooth. While I’d recommend checking out the company’s MID Bluetooth offering before committing, there’s no doubt Marshall has produced a well-built set of headphones with robust sound here. They’re not the most comfortable pair for extended listening sessions, but there’s enough padding in the earcups and headband to allow for a good couple of hours’ listening before fatigue sets in.

The amp-inspired design might not be to everyone’s taste, but the sound should suit those who aren’t convinced by the whole overpowered bass trend, but still want strong low-end balanced by crisp treble. Those upper frequencies can often seem a little too pushed, however, and the mids sometime suffer for it – getting dragged more towards the lighter tones and losing some body.

Battery life is great, there are all the extra features you could want, such as a built-in 3.5mm socket, microphones for talking on your phone’s audio duties, and, of course, the foldable design. It’s hard to fault Marshall for the solid job it’s done bringing its best headphones into the wireless era.

With an iconic design and quality overall sound, the Monitor Bluetooth are impressive headphones for their price, though the lack of bass and slightly too-crisp treble may put some off.