The Mad Catz C.T.R.L.R is a Bluetooth controller that allows you to have a more console-like gaming experience with your smartphone or tablet.

Modelled on an Xbox 360 controller, the C.T.R.L.R will feel familiar to most console gamers, but there are some unique differences with the Mad Catz controller.

It’s certainly not the first Android or iOS games controller we’ve seen in the past 18 months – just take a look at the Logitech PowerShell or SteelSeries Stratus – but it could the one that brings you closest to the console experience. 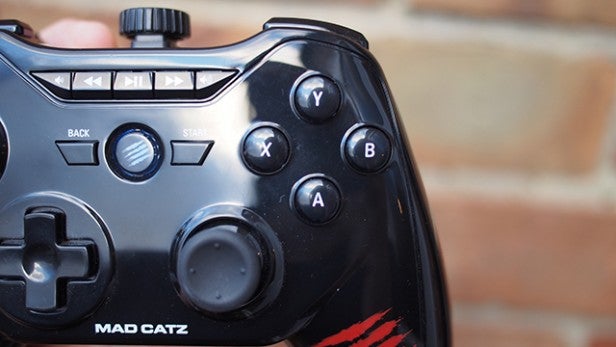 Although it’s not officially stated by the company, there’s no denying that the Mad Catz C.T.R.L.R is modelled on the extremely successful Xbox 360 controller. You can see it in the asymmetrical joysticks, conveniently located D-pad and the right-hand button diamond.

There’s even the Mad Catz logo in the centre that functions as the power button when held down for a few seconds, just as the Xbox version functions. When you first power up the C.T.R.L.R, that button will flash red and blue, letting you know it’s in pairing mode.

Sadly, the C.T.R.L.R is incapable of being paired to two devices at once. So if you want to use it with your phone and your tablet, you’ll need to make sure it’s only paired with one at a time. There’s no manual way to start up the pairing process either, meaning you must make sure it’s not connected to anything else if you want to pair the C.T.R.L.R to a different device. 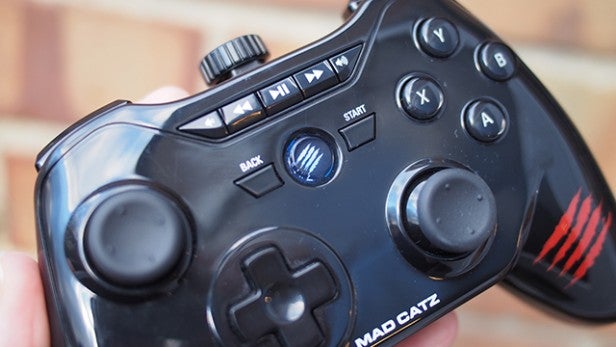 Because the C.T.R.L.R apes the 360’s design, you’ll find it feels incredibly comfortable to hold when gaming. The matte back provides a little extra grip, while the design contours to your palms. It’s even nearly exactly the same size as the Xbox 360 controller, meaning you can easily reach the shoulder buttons without it feeling like a stretch or cramped for larger hands.

But there are a few features on the Mad Catz controller that you won’t find on the Xbox 360 pad. For a start, there’s a row of media control buttons along the top between the shoulder buttons, which enable you to skip, pause or play media, or adjust the in-game music, without having to touch your connected phone or tablet.

The biggest difference is the fact that there’s a screw hole at the top of the C.T.R.L.R, to which you can attach the included phone clamp. This rubber grip stretches out to accommodate smartphones up to 6.5cm wide and 8.7cm tall. That’s plenty of room for an average-size smartphone, but you’ll struggle to squeeze a phablet in that clamp, let alone a tablet.

Due to the size of the controller itself, even with a larger handset clamped on top, the C.T.R.L.R rarely feels top-heavy. You can detach the phone clamp to simply use it as a separate Bluetooth controller for tablets. 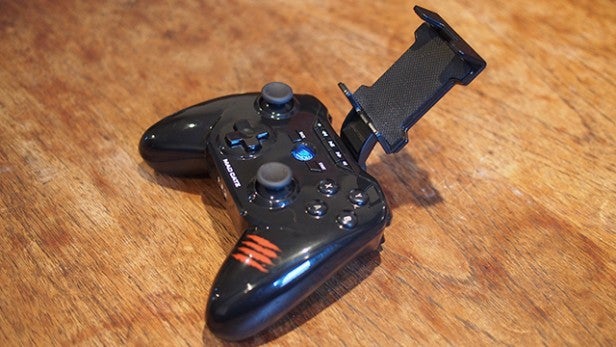 There are some downsides to the size of the C.T.R.L.R, though, because it’s far from portable. You’ll be able to chuck it in a bag you’re taking with you, but it won’t fit in your pocket unless you’ve been gifted with larger than average coat pockets.

However, Mad Catz has made some strange design choices with the C.T.R.L.R. For one, there’s no sort of carry case supplied, which means you’ll have to put it in your bag without any protection.

The front of the C.T.R.L.R has been made out of gloss black plastic, which not only makes the controller feel cheap, but also means it marks quickly and can be scratched very easily.

But it’s important to remember that the C.T.R.L R is only £39.99, so you’d expect it to have a few slightly more budget aspects.

Another of the bizarre choices that Mad Catz has made is to make the C.T.R.L R run on AAA batteries. The company claims you only get 40 minutes continuous play on a single pair, meaning the C.T.R.L.R will struggle to finish a commute, never mind a whole day. 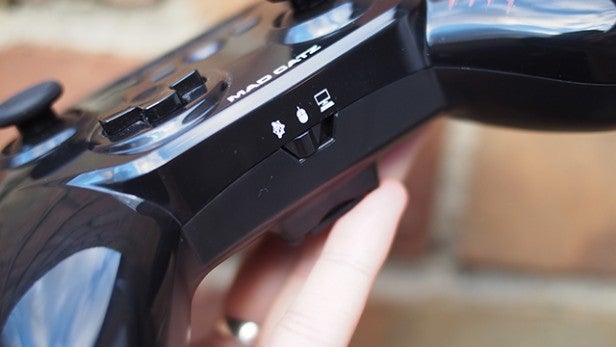 One of the things we do like about the C.T.R.L.R is the switch at the bottom between the handgrips. This switch gives you three options for using the Mad Catz controller. The far left position is your Android compatibility mode for tablets and smartphones, but move the switch to the centre and you’ll be able to pair it with your PC.

The third and final mode transforms the C.T.R.L.R into a mouse input for your Android device. Flick the switch when paired via Bluetooth and you’ll see a cursor appear on your screen that can be controlled using the left stick, with clicks made using the A button. 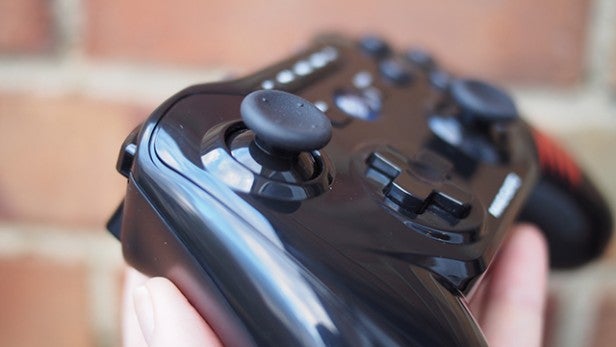 It’s something that we’ve seen far worse in other mobile game controllers, but there’s still a noticeable lag. It makes trying to play quick-response games such as Dead Trigger 2 frustrating at times.

It also affects the reliability of the mouse mode, too. It should be a great way to play games like Angry Birds without a touchscreen, but because of the dead zone, it’s slow and sporadic to use.

But although the analogue sticks aren’t the best around, we found the face buttons and D-pad very responsive – even though both make an empty, unsatisfying hollow click when you press them.

The Mad Catz C.T.R.L.R  won’t give you a mobile gaming experience like you get from a PS Vita or 3DS, but with a smartphone docked, it will feel more like the original Nvidia Shield. 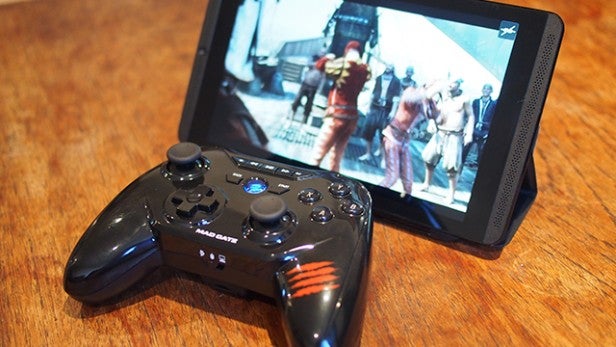 With the arrival of devices such as the Nvidia Shield, the newer Nvidia Shield Tablet or even the Amazon Fire TV, the amount of controller-compatible Android games and apps is growing by the day.

It’s still quite tricky to find controller-compatible games quickly and easily in the mobile version of the Google Play store, but you’ll find that all the big-name games, such as the GTA ports or The Walking Dead, all work with the C.T.R.L.R. Of course, there’s also a ton of Android emulators that make older platform games compatible with the C.T.R.L.R, which may be one of the key appeals for such a controller. 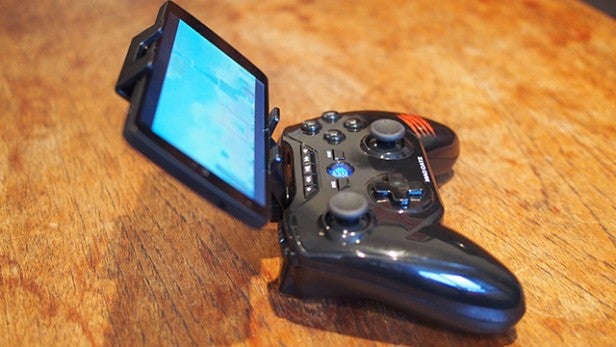 If you’re looking for a cheap way to turn your Android phone or tablet into a mini games console, the Mad Catz C.T.R.L.R is a great choice. At just £39.99 it’s one of the cheapest options on the market and the extra features will help seal the deal.

However, it’s plasticky finish may put some of you off, and there are similarly priced alternatives that provide near on-par functionality. For example, there’s the Amazon Fire Game Controller which, although designed for use with the Fire TV, also works perfectly well with your Android, iOS and even Windows Phone devices. The Fire Game Controller is actually a little cheaper at £34.99, but it doesn’t have the phone clamp for making the controller and your smartphone one complete unit while you play.

Although it’s plastic finish and meagre battery life let it down, the Mad Catz C.T.R.L.R is a solid Android controller for a portable console gaming experience.