What is the Logitech PowerShell Controller Battery?

The Logitech Powershell Controller Battery is an iPhone and iPod Touch accessory that turns your iOS device into a handheld console, replacing the often frustrating touchscreen controls with more responsive physical ones.

Controllers like this have existed before but the difference with something like the PowerShell is that Apple’s decision to provide support for third-party controller manufacturers through iOS 7 now means making game compatible is much easier.

Joining the SteelSeries Stratus and the Moga Ace Power, the PowerShell doesn’t come cheap. Indeed, at £90 it’s the same price as a Nintendo 2DS and even with the built-in battery there’s isn’t enough to suggest it is worth that much. 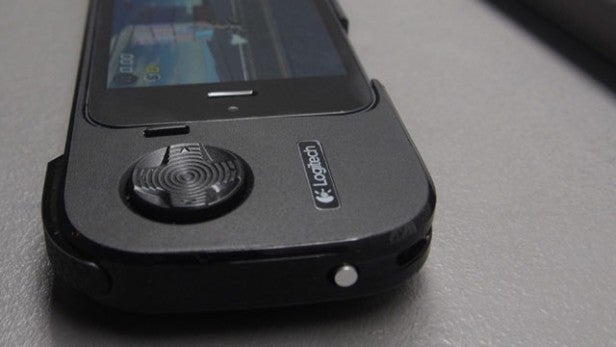 The PowerShell measures in at 200mm long or to put it into more tangible terms, it’s roughly the same length as one and half iPhone 5s’. It’s not exactly pocket-friendly, so if you are planning on carrying it around this is one you are going to need to sling into a bag. At 21mm thick it’s more portly than an iPhone and with its rounded edges and button layout looks like it’s been yanked away from a 16-bit console.

It supports iPhone 5, 5S and the fifth generation iPod Touch, so there’s no love for the iPhone 5C, and comes with an adaptor that is essentially like a rubber in-sole so you can slip Apple’s PMP inside the iPhone-shaped slot. When docked, it’ll hook up to the built-in Lightning dock and sits very tightly enclosed so there’s no chances of it rattling around in its new home.

Going back to the almost £100 price tag, the PowerShell doesn’t exactly blow you away in the looks department. It’s not as cheap and nasty as some of the controllers, though. The predominantly matte black finish with glossy piano black around the edges is reasonably sleek and the textured back with ergonomic curves gives it a nice grippy feel right where your middle finger naturally wraps around the case. 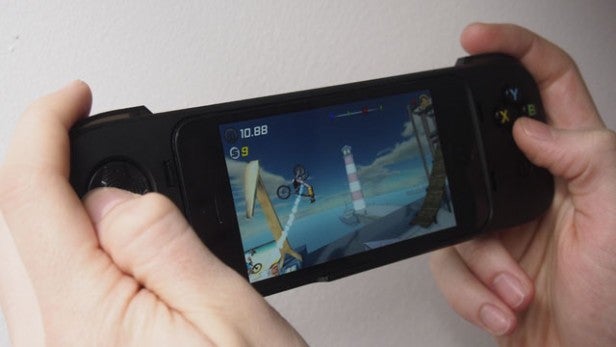 There’s a cut out for the iPhone’s camera if you feel compelled to take a picture with the phone still docked, or perhaps this is to support any games that utilize the camera? Lastly, there’s a G logo that will glow blue when the built-in battery is in use and turn red when you are low. There’s no easy way to know the precise status of the battery, which seems like an oversight to us.

There are two shoulder buttons, a D-pad over on the left with a small switch just beside it to wake the iPhone up now that you can’t get to the on/off button in the conventional way. On the same side is the Micro USB charging port and a switch between the iPhone battery and the built-in battery. Over on the right is a set of four action buttons that have a very Xbox One button look about them, a pause button below and two cavities beside the bottom of the iPhone that direct the sound from the phone speakers towards you.

If you need to plug in some headphones, there’s a tunnel to attempt to thread the cable through or you can alternatively use what the ridiculous-looking blue headphone extender that looks like it’s been pulled off a Smurf. The most disappointing absence is the lack of analogue sticks, something that would have made the PowerShell useful for first person shooters and something that both the Stratus and the Moga Ace support.

Getting your two hands onto it, this is about landscape play so you are not going get any help for portrait games. The extra weight of the iPhone gives it a nice, more evenly weighted feel while the raised, textured back does its job perfectly adding a nice grip. One minor gripe we do have with using the PowerShell for long periods is that the glossy edges could benefit from a more textured finish as they can feel slightly sweaty against the palm of your hands. 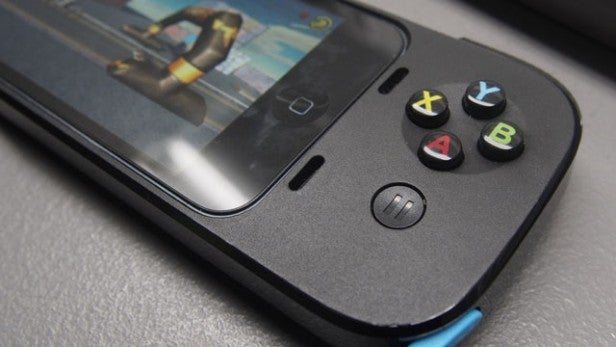 Whether it’s a handheld console like the PS Vita or an iOS 7 controller like the Powershell, success inevitably lies with the game support. Just as we’ve found with Android game controllers, it’s fundamentally down to the developers to decide if they are willing to alter games to support controllers.

Since iOS 7 launched in September 2013, the controller supported games has quickly grown. Currently, the PowerShell has around 60 games that will work. In contrast the Moga Ace Power lists 20 on its website and the SteelSeries mentions 50. There’s a wide range with big games like Anomaly 2, Oceanhorn, Asphalt Airborne and GTA San Andreas among those currently compatible. There’s some titles like Into the Dead for instance where we would question the value of adding controller support.

With the lack of analogue sticks, the Powershell is very restricted to how useful it can be for games that are crying out for physical controls like Modern Combat series or FIFA.  It would also be nice to have some sort of app from Logitech to help collate the supported apps instead of having to search out the website. If you are looking for something, the recently announced PhoneJoy iPhone app does a great job of identifying the compatible games.

Bottom line, there’s no way of gauging how keen developer to adding physical controller support and might seem like a backwards step when they are making games for touchscreen devices. 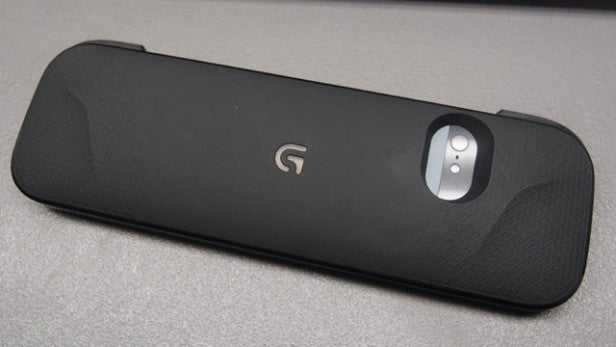 With no real setup required to go through all you need to do is slip in your iPhone or iPod Touch and if the game launched is listed as compatible the PowerShell will automatically connect. It doesn’t mean however, you can abandon the touchscreen altogether. It differs game to game, but most will still require tapping virtual buttons in the menus and there’s no way to navigate through the IOS UI using the controls.

Running a selection of games, the results vary from useful to frustrating. It’s a great fit for the motorbiking game Trials Extreme 3, where the D-Pad and shoulder buttons make up for some pretty frustrating virtual controls. Stickman Soccer and Asphalt 8 Airborne 8 also take full advantage of the action buttons and D-Pad. For driving and steering in Asphalt though, the analogue D-pad feels stiff and unresponsive at times. Playing shooter Dead Trigger 2, you’ll need to use the touchscreen controls and physical controls in tandem and it’s not the most intuitive experience.

The built-in battery does at least do its job well and will get you a significant amount of extra playtime. You can expect to get a day’s play when your iPhone battery is struggling. From an hour’s play the phone battery dropped by less than 5% so it definitely doesn’t whip away significant amounts of stamina.

Should I buy the Logitech PowerShell Controller Battery?

In a word, no. Just the price alone seems ludicrous for a product that could end up being useless after a year if Apple decides to change the size of the iPhone and you want to upgrade.

The controller feels well-built and the battery is a real plus but there are little niggling issues with the design and the buttons like the headphone extender and the not particularly great D-Pad. The controls do work reasonably well for the games we’ve tried, but fundamentally there needs to be a whole lot more games on board to make it worthwhile.

The SteelSeries Stratus and Moga Ace are Bluetooth controllers so work with more devices, but are still expensive for what they are and can do.

Until there’s a significant drop in price, the Logitech PowerShell is very difficult to recommend and the same goes for its rivals. It’s the first controller and certainly won’t be the last. Unless you desperately want something for 2D gaming we suggest waiting it out.

The missing analogue sticks, small catalogue of compatible games and price makes the Logitech PowerShell an iOS 7 controller to avoid.