What is the Nvidia Shield?

The Nvidia Shield is a portable Android games console that can also play PC games streamed from your desktop and now your laptop. Announced way back in 2013, the Tegra 4 processor-powered Shield looks highly unlikely to ever end up on UK shelves.

But now that Nvidia has announced the Shield Tablet, now seems as good a time as any to revisit the Nvidia Shield given this is as close as you can get to the same experience as Nvidia continues to keep the chunky handheld updated adding Android 4.4 KitKat and the further updates to its software features.

This isn’t a traditional review as such, we won’t be handing out a score, but this is a flavour of what Nvidia’s Shield ecosystem is like to live with. 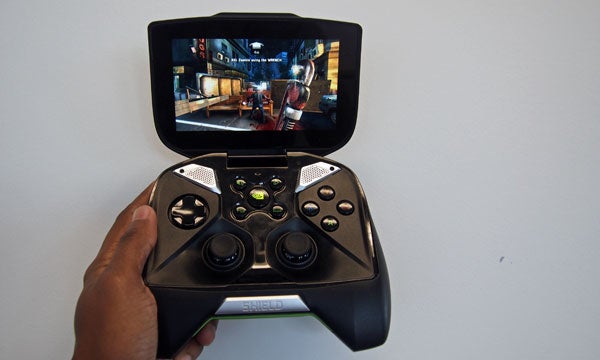 The Shield is basically an Xbox 360 controller with a 5-inch screen built into the lid that flips open. It’s bulkier than the PS Vita and the Nintendo 3DS and at 579g, it’s significantly heavier to hold. It’s more compact than Android handhelds like the Wikipad 7 and the Archos GamePad 2, though. You just can’t slip it in your pocket.

It’s not an especially stylish device, but it is solid, comfortable and well-made, which are all important qualities for a portable gaming machine. The button layout is familiar and easy to get to grips with, and it’s easier to deal with the weight given the controller’s ample handles to grab hold of. 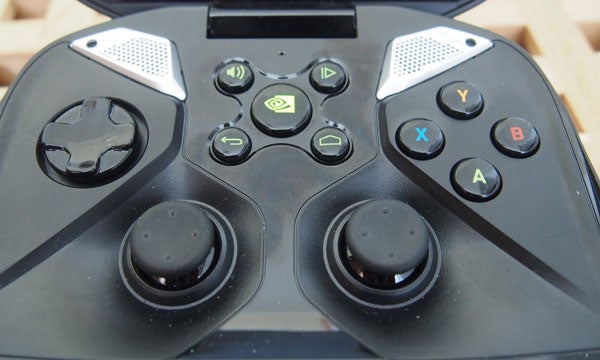 Nvidia includes five buttons just below the screen that essentially substitute the soft keys you get below most Android smartphones and tablets. You can adjust volume, skip back a screen, go back to the home screen and there’s a central Nvidia button taking you to the games store. They are kept away from the main controls and won’t get away from your gaming. 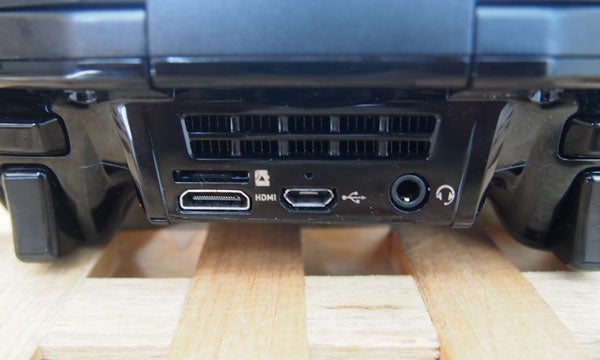 Key connectivity ports can be found between the triggers and bumpers, which include a 3.5mm headphone jack, microUSB charging port, micro HDMI to HDMI port for connecting it to a HDTV and a microSD card slot to expand on the 16GB onboard storage. There’s a 28.8 Wh battery promising up to 10 hours of playtime and completing the package are two stereo speakers inside, which offer surprisingly loud, clear audio.

As an Android console, this is the most comfortable one I’ve tried. The extra weight isn’t an issue when you realise how well distributed it is across the design and the controls have a very familiar feel. It’s probably not one to pull out on the commute but if you are lounging on the sofa, it’s a great little gaming machine. 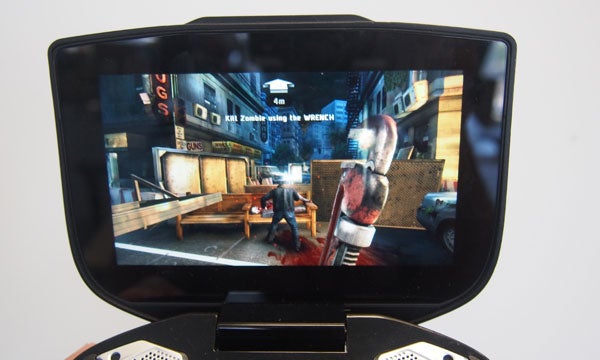 That’s the hardware, but the interesting bit is really the software. The Shield has recently been updated to Android 4.4.2 KitKat up from Android 4.3 JellyBean, which brings features like cloud printing all the usual tweaks Google has added to refine the operating system.

Other than that, this is a largely untouched version of Android. You still have multiple homescreens, an app drawer, app folders and access to the Google Play Store. Nvidia doesn’t pack it with bloatware including native Google apps like Drive and Google Maps, which works with the built-in GPS. There’s some US-centric content pre-installed as well like Hulu Plus and Pandora, while Twitch is also included so you can broadcast gaming sessions.

A flick through the settings shows that Nvidia also includes Miracast support to wirelessly mirror the screen to a TV, although this is better suited for video and picture sharing than lag-free gaming. To help PC gamers make the Shield transition, you can also assign the right analogue stick to work as a mouse cursor as an alternative to navigating the UI.

The most notable addition is the Nvidia TegraZone. This is a dedicated store where you’ll find Android games optimized for the Shield. It’s also the place where you can find a library of PC and Android games that you have access to, so you don’t have to sort through the Google Play Store to find something to play. 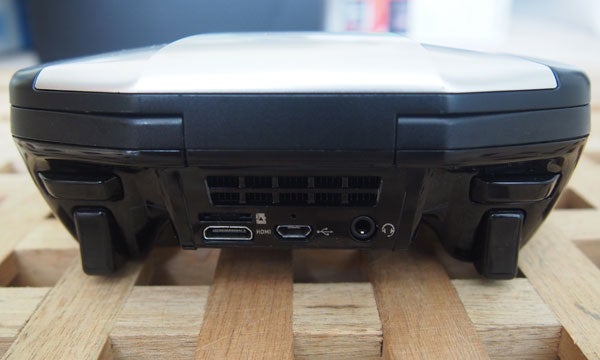 For those Android games that don’t include physical controller support, a GamePad Mapper is also on board to create a gesture and controller support, which you can save as profiles to use again. This is something other Android handhelds like the Archos GamePad 2 have spectacularly failed at getting right, and which the Shield does very well by comparison.

The other trick is to play PC games through Nvidia GameStream. This lets you stream around 100 Shield-friendly PC games over a network, with effectively near-zero lag and optimisation for the handheld’s screen. 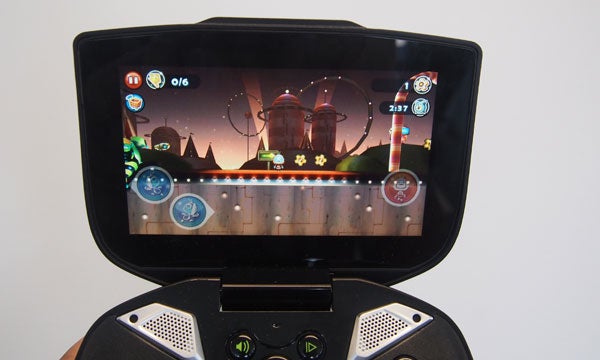 The latest Shield update now makes it possible to do it from a gaming laptop as well as gaming desktops and you no longer need to be on the same Wi-Fi network to do it. This is a very similar principle to the way Sony PS4’s Remote Play works, so your PC can be remotely accessed when you need wake it up and play on the move.

There’s some very specific requirements to make it work, however. For starters you need to ideally have a 802.11n dual band router or a 802.11a/g router at the very minimum to create a Wi-Fi bandwidth of at least 5-megabits per second upload and download. Your gaming laptop or desktop also needs to pass the GeForce Experience software test to ensure it has a GPU suitable to stream PC games to the Shield.

For hardcore gamers this is a very cool and innovative concept. You clearly need a decent home internet connection to use the feature outside of the home, but the fact over 100 PC games support the features is very impressive.

In addition to streaming games to the Shield, Nvidia also includes a Console Mode, which means you can connect the handheld to a HDTV via HDMI and play games at 1080p at 60fps. There’s added support for wireless Bluetooth controllers and keyboards for MMO gamers, too.

One of the newest features Nvidia is testing the waters with is something called Grid Cloud Gaming. Think PlayStation Now or OnLive where you can stream and play a library of games online. It’s currently still in beta and is only available to try out for three months if you live in Northern California.

That’s not all. You need an internet connection with at least 10Mbps download speed, a home network with 40ms or less ping and a Gamestream-ready 5Ghz Wi-Fi router. But the principal is very exciting, and this is clearly the ‘next step’ in Nvidia’s vision for portable gaming. 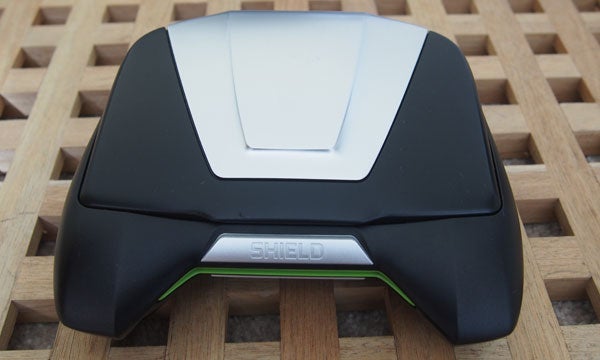 This is the best Android portable console I’ve picked up and used by a mile. The controls work well, games run without a hitch and it’s the most I’ve spent playing Android games in a very long time. It’s for that reason that Shield Tablet feels like such a promising development. It shares the strengths of the Shield, but adds a level of versatility absent here.

It’s also clear that the Shield has been a test bed for future devices away from a dedicated handheld, as proved by the Shield Tablet. But if this is the last Nvidia handheld we see it will be a disappointment because at the very core, there is something great here.

Hopefully the Shield Tablet can capture the potential and make it greater.