What is the Nvidia Shield Tablet?

The Nvidia Shield Tablet is an Android tablet designed specifically for gaming. It’s the spiritual successor to the US-exclusive Nvidia Shield handheld, but it adopts a more familiar and practical form – a tablet and controller duo. That difference aside, however, the aim remains to supercharge your Android games and let PC gamers stream games to their tablet from their PC.

For a modest £240 you get an 8-inch HD tablet kitted out with Nvidia’s custom-made Tegra K1 processor. On paper the K1 provides performance oomph that makes the Shield the best tablet for gamers, though you need the £50 Shield Controller to make the most of this power. That adds to the cost, but even with it the Nvidia Shield Tablet compares well to the iPad mini 3 and upcoming Nexus 9 while adding gaming features neither can offer.

What’s immediately striking about the Nvidia Shield Tablet is its build quality. It hasn’t quite got the premium finish of an iPad, but its metal body is complemented by a soft-touch rear that makes it very comfortable to hold for long periods of time.

To aid its comfort, Nvidia has tapered the edge of the back with a slight curve, making it easier to grip and hold one-handed. That means the back panel seems to blend seamlessly into the Shield Tablet’s matt-black metal edges, which are just 9.2mm thick. Now that might not be the slimmest tablet around – just take a look at the likes of the 6.1mm iPad Air 2 or 6.6mm Samsung Galaxy Tab S 8.4 – but there’s no bend or flex. It looks and feels like a quality product.

From the front it has the look of an elongated HTC One M8, with a pair of front-facing speakers topping and tailing that 8-inch 1080p display. There’s even a daintily placed front-facing 5-megapixel HDR-capable camera in the midst of one of those speakers. 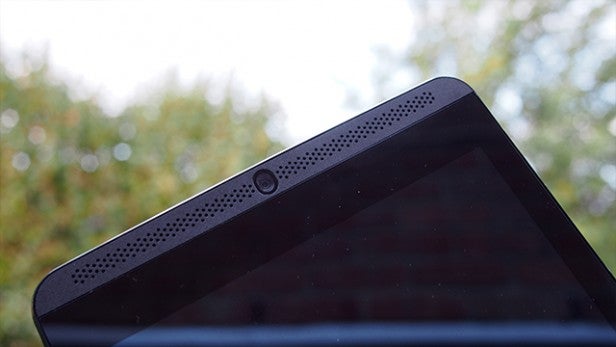 Down the right-hand edge of the Nvidia Shield Tablet you’ll find the power/hold button, with a volume rocker and microSD card slot below that, supporting cards up to a whopping 128GB. At the very bottom, the new DirectStylus 2 is docked securely. In fact, it’s so securely stored that it can take quite some force to actually free it from the tablet itself.

If you buy the 16GB Wi-Fi-only version, as we have here, there’s also a phantom port along the right-hand side that you can’t open. This is for the SIM card slot in the 32GB version, and it would have been better if Nvidia had removed this altogether on the 16GB model for a more streamlined edge.

Another small niggle is how the hold button and volume rockers take a little force to depress. If the buttons protruded a little more, or gave a little more of a click when using, they might feel more responsive. This might just be a default on the review sample we’ve got, but children may struggle with operating these buttons at times.

Along the top edge, there’s another speaker and all the ports you could need. The Nvidia Shield Tablet has a micro USB port for charging, but also a mini HDMI port for connecting the tablet to your TV for big screen Android gaming, which is quite the treat. There’s also your standard 3.5mm headphone jack.

The left-hand side has two strange-looking slots that are used to connect the Shield Tablet Cover. If you’re willing to splash out the extra £24.99 for this cover (which doesn’t protect the sides or back of the tablet), we’d strongly recommend it. It builds on the Apple SmartCover triangular support feature, but is the best execution of it we’ve seen yet. It’s far more secure and manoeuvrable than the Apple alternative. Plus, if you plan to buy the Shield Controller, too, it’s the best way to prop up the Shield Tablet for those gaming sessions. 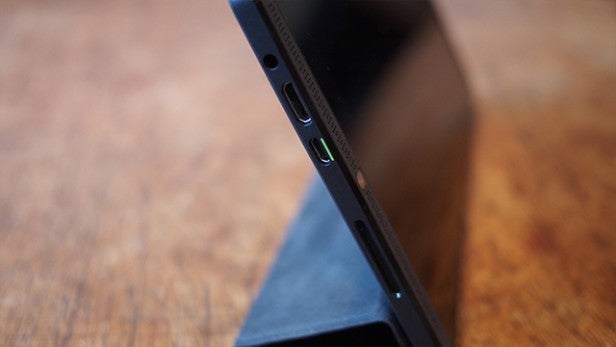 We loved the portability of the original Nvidia Shield, but its small screen meant it wasn’t much use for anything other than games. It’s a very different story with the Shield Tablet.

The Nvidia Shield Tablet has an 8-inch, 1920 x 1200p HD display. While it might not compete with the Retina display of the iPad mini 3 or Nexus 9, it’s still a great display. Colours are rich and the clean, pure white level makes reading a pleasure.

It hasn’t quite got the punch and contrast of a Super AMOLED display, but when you’re runnning Tegra-optimised game you’ll notice the detail and finesse of the Shield Tablet’s display. Also, that 8-inch size makes the Shield the perfect size for gaming on the go — as well as everything else an Android tablet should be used for.

There is one downside to the screen in that it isn’t as bright as we had hoped. Watching particularly dark video content makes it pretty difficult to discern the more minute details of your movies and TV content. We haven’t found it the biggest issue for gaming, but can be problematic for video content. 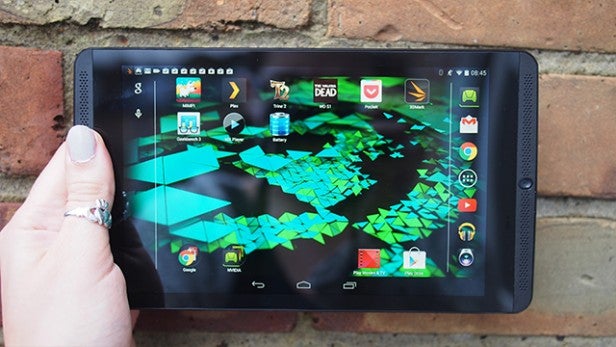 The Shield Tablet has two front-facing speakers, plus two more along the top and bottom edges of the tablet.
That means the sound in the Nvidia Tablet really packs a punch. You’ll rarely need to turn the volume up the whole way, but if you do it’s quite capable of filling a room with music.

Unlike rival tablets, the Shield Tablet isn’t equipped with Dolby technology or any other audio enhancements that Nvidia has mentioned anyway. However, it does have a dual bass reflex port to help reduce distortion at high levels.