For fans of the classic JRPG, big-budget entries are becoming increasingly few and far between. With genre posterboys like Final Fantasy and Dragon Quest moving in different directions, many gamers are finding it hard to scratch that old-school stat-grinding itch. Luckily, Japanese developer Tokyo RPG Factory aims to bring the JRPG back to its former glory. After the success of 2016’s I Am Setsuna, the studio is now working on the follow-up, Lost Sphear. Curious to see how the sequel is shaping up, I sat down with game director Atsushi Hashimoto at this year’s E3.

As he boots up Lost Sphear’s title screen, nostalgia immediately kicks in. In a firm nod to the genre’s forefathers, the game’s logo fades into a beautiful environment, accompanied by the kind of haunting piano melody that soundtracked countless childhoods in the ’90s. For Hashimoto, the hallmarks of a traditional JRPG are still as captivating as ever and he’s determined to celebrate that.

“This is the second game in what we call Project Setsuna – the overarching project which started with I am Setsuna last year. The idea there, of course, is to use modern technology to recreate the Japanese RPGs from the ’90s, which is widely seen as the golden age of the genre. We want to give gamers our unique take on the JRPG.”

Despite bearing similarities to I am Setsuna, this is an entirely standalone adventure. Players take control of Kaneda, a young hero who returns home to find his village of El Garth completely wiped from existence. In a mechanic reminiscent of Warren Spector’s Epic Mickey, objects in the game world are defined by memories – and once those memories cease to exist, they are erased from existence.

“Who Kaneda is as a character and what he can do is crucial to the concept of the world and the game’s lore itself,” explains Hashimoto. “Obviously we just showed you the idea of things becoming lost and removed from existence, and that phenomenon is what the story centres on. Kaneda has the ability to restore these lost memories, these lost things, so as a character that’s part of his adventure – rebuilding what’s been lost using the power of memory.” 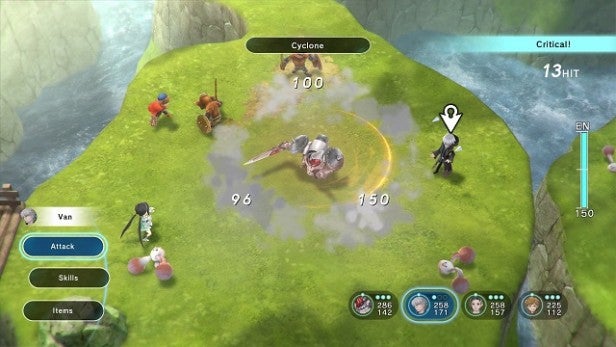 While Hashimoto declines to show exactly how this mechanic would work in the game, he does give a taste of Lost Sphear’s battle system. Building on the foundation of I Am Setsuna’s Active Time Battle System, he explains that the team has added a new dimension to the traditional turn-based combat. Instead of just attacking straight on like in the last game, in Lost Sphear players will be able to move their characters, factoring the direction of their attacks and their party’s positioning into account.

“One thing, of course, that we got a lot of feedback on was the ability to move your character around freely in battle. We did a lot of experimentation in order to figure out how best to make that a part of the game, which is how we ended up with the current version of the ATB system. We feel that the positioning really adds to the tactical and strategic elements of the game, rather than just having players choosing the attacks. “

He then demonstrates, using a cursor to send one character behind a floating enemy, before unleashing a devastating blow on the unsuspecting monster. “So, depending on the character and the attack, they can catch more enemies in the area of effect than if they’re in a different position. This works with single-point attacks as well.”

As he takes us back into the world map, Hashimoto walks the party into town, revealing another new addition that fans have been passionately clamouring for: inns. Any JRPG player worth their salt will know that these are part and parcel of the genre, and while for many it won’t exactly be the most exciting new addition, Hashimoto was happy to accommodate fans.

“There weren’t actually any inns in I Am Setsuna, so we tried to put some in this time. Fans were asking for them, so now if you see an inn you can go in and do all the standard things you’d expect.” 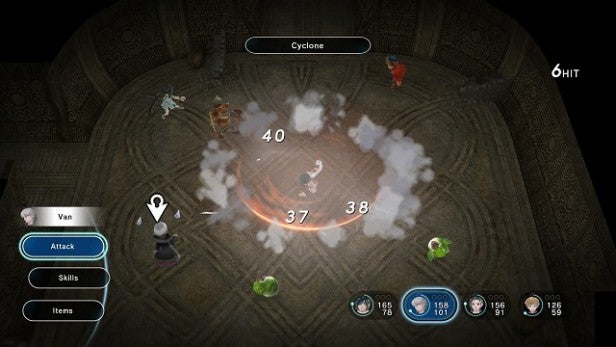 While I Am Setsuna was largely a charming nostalgic adventure, over the course of its 12-hour story, the core gameplay loop left a little to be desired. Players were largely just sent roaming around the world map, repeatedly travelling from town to dungeon, so the game’s enjoyable story was hampered by a lack of gameplay variety. This time around, however, Hashimoto is keen to change that.

“When we created the original I Am Setsuna we had an idea in our head and created what we thought would be a fun and interesting game. But we found that there was maybe a little bit of a gap between the perceptions of what we felt made a good game and what the audience and fans were looking for.”

When pushed again about whether Lost Sphear will contain side quests or ways to break up the lengthy grind, the director reluctantly teases some more information: “We have learned a lot from what people said about Setsuna and the gameplay cycle there, so we’ve tried to reflect that and improve on that with Lost Sphear.” He pauses. “We just can’t go into exact details.”

Aside from Nintendo’s Xenoblade 2, this year’s E3 showed a gaming landscape lacking in Japanese RPGs. When asked why the genre seems to be in such sharp decline, Hashimoto revealed that he believes it’s largely due to spiralling development costs. “There are certainly fewer Japanese studios making RPGs these days. I think the development resources and costs required to make a game of that size are maybe getting a bit much for some people in Japan now. It’s an opportunity for us, though; it allows us to really shine through and make the stuff that we only think we can make.”

When asked about the future of Tokyo RPG Factory, Hashimoto hints that traditional RPGS may not be the only thing you can expect from the studio in the future.

“I think we’re still finding our feet a little bit, so we want to concentrate on orthodox RPGs for the time being. With RPGs you’ve got a lot of different variation within the genre itself, you’ve got more orthodox stuff like Setsuna and maybe Lost Sphear will fit into that category too. Then you’ve got action-based RPGs, your simulation-style RPGs. Certainly in the future we want to look at these other possibilities.” 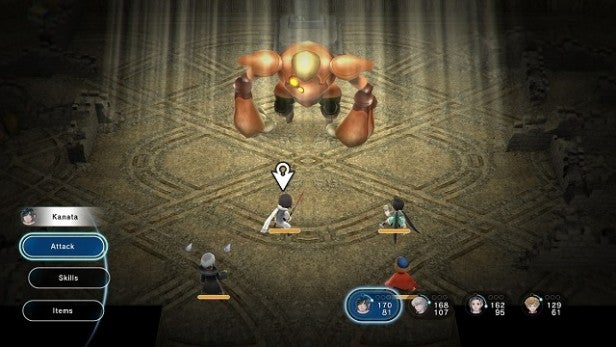 What I saw of Lost Sphear hinted at a sequel that offers all the improvements fans requested, as well as a few new surprises. It’s still too early to tell whether there’ll be enough gameplay variety to break up the repetition of the grind, but one thing was clear from my time with Hashimoto: Tokyo RPG Factory is absolutely determined to make the best JRPG that it can.

While it seems unlikely that Lost Sphear will reinvent the wheel, for many gamers pining for the ’90s classics, this team’s unwavering commitment to the declining genre will be more than enough.