What is the LG G Watch?

The LG Watch is one of the first smartwatches, along with the Samsung Gear Live and Moto 360, to run on Google’s new Android Wear operating system. It’s also the Korean company’s third attempt at making a watch with smartphone functionality.

This time it’s thinking about the G Watch as a companion for your phone instead of a standalone device like the LG GD910 was when it launched back in 2009. At £159, it’s one of the cheapest available but a combination of hardware issues and need to iron out some of the software bugs means it’s not the complete Android Wear smartwatch package yet. 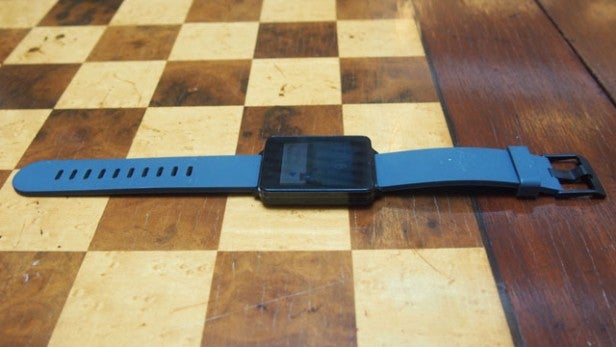 What’s striking about the G Watch is how ordinary it looks. There’s the rectangular glass touchscreen display, with a stainless steel case that works as the Bluetooth antenna, as the focal point, plus a matte black rubber watch strap. You can replace the watch straps, ideally 22mm straps work best, but out of the box it’s a very underwhelming experience. It’s not ugly, but it’s not very stylish either. Despite all of our issues with the Samsung Gear 2 and Gear 2 Neo smartwatches, they did at least try to make something a little more pleasing on the eye.

We wouldn’t call the LG G watch cumbersome, but at 9.95mm thick it’s not all that slim, either. It only weighs 63g, though, which makes up for the rather chunky body. Moreover, this chunkiness comes with the bonus of IP67 water and dust resistance, which means means it can survive a shower — just don’t take it swimming. 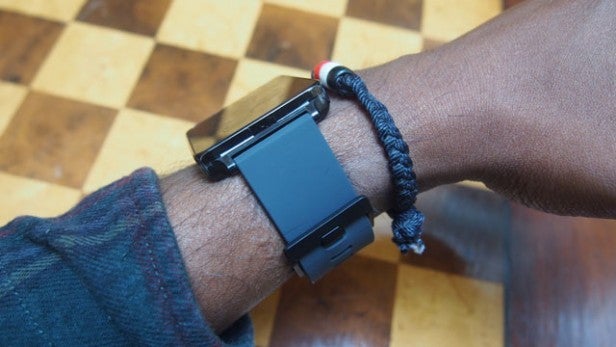 It doesn’t take long to notice that there’s no main buttons. Everything is done via interacting with the touchscreen, plus there’s a microphone on the bottom edge of the watch for voice recognition. If you want to reset the device, it can be done through the settings on the watch or pressing a tiny button on the back of the watch with a pin.

This also sits alongside the row of charging pins, which means the G Watch requires a proprietary charging cradle. It’s small magnetic plate that connects to a micro USB cable and is definitely a sleeker charging alternative to Samsung’s smartwatches, though we’d still prefer a standard cable connection. 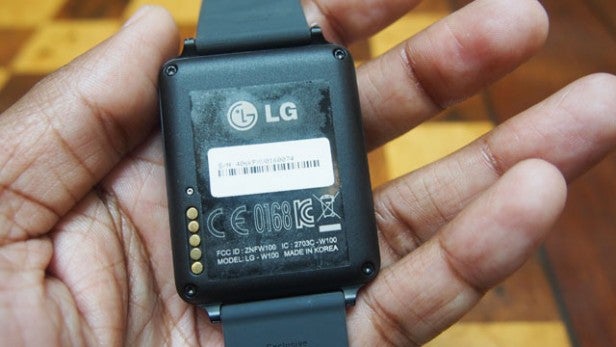 LG has gone with a 1.65-inch screen, which the company says is the sweet spot for a smartwatch, making it marginally larger than the 1.63-inch screen on the Samsung Gear Live Android Wear smartwatch. The always on display aims to keep that sense of having a traditional watch around your wrist, although you do have the option to turn it off to help battery life.

It’s a 280 x 280 resolution IPS LCD touchscreen with 240 ppi and Gorilla Glass 3 on top to add a layer of durability and in theory improve viewing angles. It’s a nice sized screen but with the thick black bezel surrounding an already a narrow display, it doesn’t do it much favours in the looks department.

Interacting with the display is not a problem, however screen visibility outdoors is. Indoors, brightness is not a problem and there’s no need to jump to the highest setting. When you step foot outside, however, it becomes a problem in bright sunlight. Moving to a lighter clock face can help matters, but the screen is not well equipped for sunny days and that is a fundamental problem. 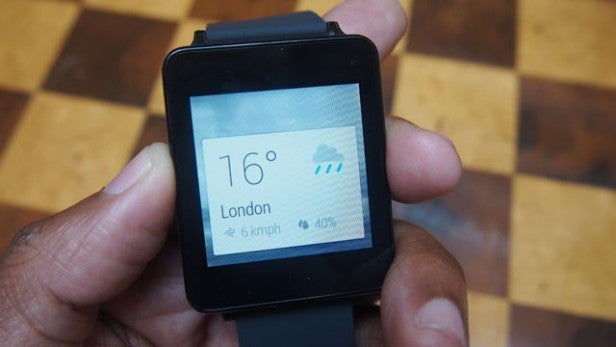 Screen sharpness and clarity is not quite on par with the Super AMOLED displays on Samsung’s smartwatches either. For reading text, notifications and viewing app icons it’s perfectly fine. It’s when images are pulled through from applications where the difference in quality is more noticeable.

On a more positive note, there’s no problem with screen responsiveness as it handles swipes and screen presses with few issues. It’s the G Watch screen’s performance outdoors is really what lets everything down.

Behind the small touchscreen lies the kind of specs that sound like they belong to a mid to low-range Android smartphone. There’s a 1.2GHz Snapdragon 400 CPU, with 4GB of storage and 512MB memory. That’s more than sufficient for launching apps and moving between screens, although there’s just the slightest of lag in screen transitions. It’s not going to ruin your overall experience, though.

Inside is a 9-axis movement sensor, which includes a gyroscope, accelerometer, compass and altimeter. For anyone that uses an activity tracker, the altimeter helps track elevation and combined with the built-in pedometer gives the G Watch decent fitness credentials.

There’s a vibration motor that works with notifications, but sadly no built-in GPS — perhaps not such a huge surprise given the price. LG also opted against following Samsung in including a heart rate monitor. Features like GPS need to be harnessed from the Android smartphone synced with the G Watch, which is done over Bluetooth 4.0 low energy.

Without stating the obvious, the G Watch needs to be connected to your phone, specifically one running Android 4.3 JellyBean or higher to get the optimal experience. When disconnected, you do still get some stripped back functionality like the ability to check the time, view your step count, change watch faces and use the stopwatch so you are not stuck with a entirely redundant device when your phone dies.