Available on Xbox One, PS4 (reviewed), Wii U, PS3, Xbox 360, PS Vita, PC
Think of what all the best Lego games have in common. First, a foundation of rock-solid, tried-and-tested Lego gameplay. Next, some brilliant new feature or innovative twist that takes that gameplay up another level. Then the brilliant split-screen, co-op gameplay, followed by a beloved franchise with a big ensemble cast of recurring characters you’ll want to collect. After that comes a rich open world where you can build up your supplies of Lego studs and then collect them. Whether your favourite Lego game is Lego Lord of the Rings, Lego Marvel Super Heroes, Lego Batman 2 or the second Lego Harry Potter, it’s likely to have most or all of these things.

Lego Jurassic World? Maybe not so much. It has the Lego gameplay, with all the usual scenery-smashing, brick-building, puzzle-solving stuff you might expect. It also has the co-op action, and a healthy bunch of characters to collect. Yet this is unquestionably the weakest franchise that the series has yet explored. Sure, many of us love the original Jurassic Park and the latest movie is a huge smash hit, but who really spends much time thinking fondly of the flawed The Lost World or the forgettable Jurassic Park 3? And is there anyone out there for whom unlocking Pete Postlethwaite’s Roland Tembo or Vince Vaughn’s Nick Van Owen will be as exciting as unlocking Wolverine and Captain America or Saruman and Golum? And those are just the characters who actually have names. A sizable proportion of Lego Jurassic World’s unlockable characters are generic dino hunters or InGen employees. 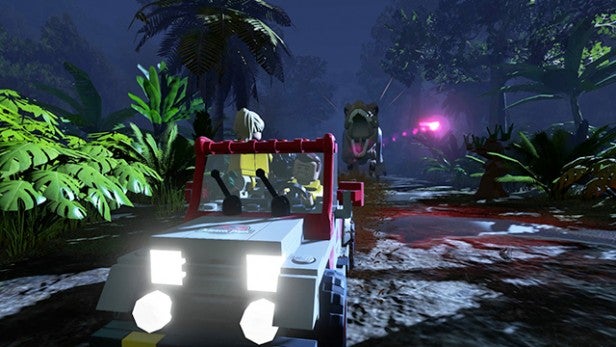 It also must be said that Lego Jurassic World’s new twists aren’t all that thrilling. It has two open world settings, Isla Nublar and Isla Sorna, but neither does much more than link the five episodes fashioned from each film together, with a handful of fairly simply puzzles to add a little ballast. There are several rushing-out-of-the-screen chase sequences (more on these later), a new rapid-button-press mechanic and what looks suspiciously like quick-time events.

The most exciting feature, being able to play as a big, rampaging dinosaur, is restricted to a few areas of the open world setting and some key sections in the game, and though you can splice together your own creations later, there’s not an awful lot you can do with them once you have. A new weather system gives the game some added visual drama – and this is the best-looking Lego game yet – but it doesn’t impact gameplay much at all. Overall, if you felt that recent Lego games showed the series coasting, Lego Jurassic World won’t change your mind. 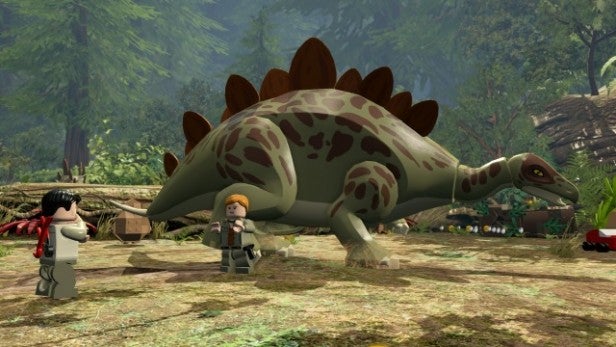 All of which explains why, an hour into Lego Jurassic World, we were beginning to think that this was the game where the Lego series jumped the shark. From the characters to the special abilities they used to solve problems to the vehicles, collectibles, puzzles and settings, it seemed that the Lego games had nothing new to show us.

Yet by the time we’d worked our way through Jurassic Park and The Lost World, we’d changed our mind. Lego Jurassic World might not be the most innovative game in the series or the one with the most varied settings or exciting cast, but it still showcases TT Games’ genius at transforming memorable movie moments into smart, interesting levels that both parody and celebrate their inspiration. In fact, Lego Jurassic Park has some of the best levels and cut-scenes of the series – not to mention some of the funniest.

Take some of the high points of the original Jurassic Park. That first T-Rex encounter where the car is overturned in the mud and rain becomes a series of gags and block-bashing and building puzzles, which retains some of the movie’s tension while making fun of the big dino and softening one of the film’s grizzliest moments. The sequence with the velociraptors in the kitchen fares similarly, the toothy varmints playing up to the cameras, the kids using their abilities and fiendishly building to escape. There are some fantastic silly sight gags, some ingenious puzzles and some really clever subversions of movie dialogue to make a background joke. The early Lego games worked because they were built by people who knew and loved the movies but weren’t afraid to take the proverbial out of them. The same goes for Lego Jurassic World. 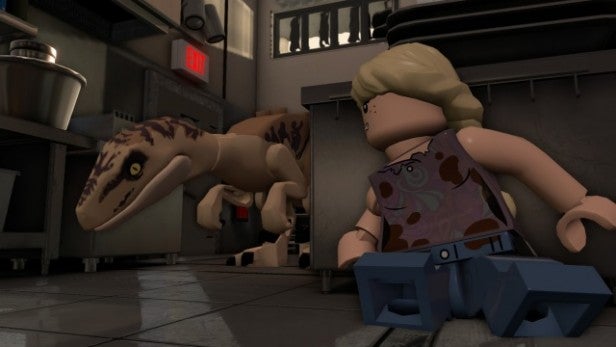 The characters and abilities also help. Did you find the first film’s Lex a hugely annoying scream machine? Well, now all that screaming has a purpose, while her ludicrous hacking skills are turned to the game’s advantage too. Jeff Goldblum’s Dr Ian Malcolm is animated with something of the actor’s energy and knowing humour, and even Vince Vaughan’s dull photographer from the sequel gets more interesting when it turns out that he can temporarily daze dinos with flash photography, resulting in a cheeky snapshot every time.

The gameplay isn’t consistently brilliant. The open-world bits that link up the levels sometimes feel like busywork, shoved in simply to space things out. There are numerous out-of-the-screen chase sequences that don’t give you anything much to do beyond steering left-and-right to avoid obstacles and collect power-ups, with too little time to see what you’re supposed to be hitting or missing, and no real penalty when things go wrong. And while quick-time events are minimal, a recurring mechanic where you have to fend off a dinosaur by tapping a specific button recurs a bit too often for our liking. Once or twice is exciting, but by the seventh time it’s getting predictable and tiresome. 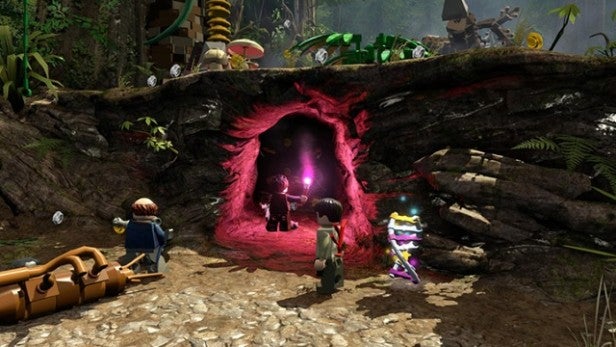 This stuff might put off some grown-up gamers, but then pleasing them isn’t really what the Lego series is about. Younger gamers who have loved previous Lego games will still love this one, and it’s a fabulous effort for families that like to play together. Puzzles that are fun to solve single-handed are even more enjoyable with two of you at work, and there’s more scope to explore, collect, mess around as a destructive Triceratops or push forwards to find and unlock the next big dino.

What’s more, while adults might find some of the humour unsuccessful – there’s a lot of new background dialogue that’s not actually all that amusing – kids will lap it up. This, after all, is a game where one of the key character abilities is the power to dive into dino poo and retrieve lost items, and where the raptors are keener on sausages than human flesh. Some of the scariest dinosaurs reveal an unforeseen knack for slapstick gags. Only the most po-faced miseryguts won’t crack a smile.

Verdict
Lego Jurassic World isn’t a high point for the Lego series, but it’s more enjoyable than last year’s Lego Batman 3: Beyond Gotham, despite the absence of exotic alien worlds and a slightly dull cast. It doesn’t stop the feeling that things need shaking up in the world of Lego games, but it still delivers what matters most: strong co-op gameplay, plenty of laughs, some engaging puzzles and a smorgasbord of silly slapstick fun.