Available on Xbox One, PS4 (reviewed), Xbox 360, PS3, Wii U, PC
TT Games’ fourth Lego superhero opus could have been its best, fixing the few complaints fans had about Lego Batman 2 and boasting some of the strongest levels in the series. Yet while Lego Batman 3 is fantastic fun, it’s also slightly less satisfying than its predecessors. Put it down to a failure to introduce something fresh and unexpected, or to a structure that doesn’t leave as much room for free play, but it’s the first major Lego game in years that doesn’t feel like an essential family game.

There’s nothing wrong with the minute-by-minute gameplay, which sticks to the tried and tested formula laid down by Lego Batman 1 and 2. Each level is effectively a series of simple puzzles where Batman, Robin and the other playable heroes have to work their way past each obstacle en-route to the level’s conclusion. The heroes themselves have their own specific capabilities, but Lego Batman has already focused on the role of suits, with Batman and Robin switching costumes to tackle certain tasks. 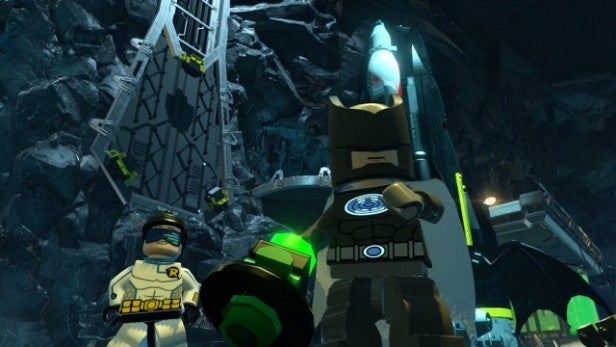 Batman’s sensor suit, for instance, can highlight hidden grapple points or enable him to sneak past security. His power suit has missile launchers which can shatter silver objects, while the space suit has a jetpack and a laser that can cut through gold bricks. Robin’s hazard suit is proof against chemical spills and can hoover up and deposit useful bricks, while his magnet suit has magnetic boots and the power to attract glowing objects. Only by switching characters (if you’re playing solo) or through teamwork (in co-op play) can you use all your powers and all your costumes to make your way from start to end.

The one thing we didn’t like about Lego Batman 2 was that it sidelined its other DC super heroes, giving you a little time with Superman, but holding back the rest of the Justice League until the last few missions. Lego Batman 3 doesn’t make the same mistake. While the early sections stick to the dynamic duo, it’s not too long before you’re handling Superman, Cyborg, the Flash, Wonder Woman and Martian Manhunter, and not too long after that before you’re playing as the villains too, with Killer Croc, Solomon Grundy, The Cheetah, Lex Luthor and the Joker joining in with the main campaign missions, not just the unlocked free-roaming stuff. 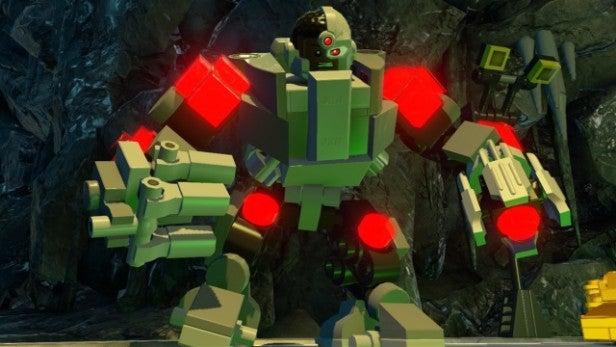 What’s more, more of these characters get extra forms or extra suits, so that Cyborg, Lex Luthor and the Joker get variations of Batman and Robin’s kits, while Martian Manhunter gets a larger, secondary form and cool mind-control powers.

There’s plenty of fighting, too, as you bash, smash and sometimes tear your enemies apart, plastic piece by plastic piece. Following on from Lego Marvel Super Heroes, each of the game’s stars gets his or her own distinctive moves, and the giant-sized characters (or those with transforming robot suits) can really trash the scenery in style. There’s nothing all that new here, but the old adage ‘if it ain’t broke…’ still applies. Even the traditional arcade elements – particularly an excellent Resogun-style shoot-em-up – work better here than they have in years. 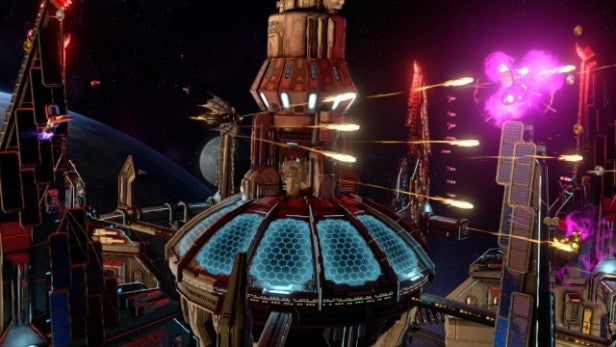 The series’  secret ingredients have always been fan service and humour, and here Lego Batman 3 doesn’t disappoint. We get a huge 150-strong cast of DC heroes, villains and side-characters, while po-faced Batman and youthful, attention-seeking Robin have never been such an entertaining team. The other heroes and villains – with more of them voiced – get their own share of dastardly puns and self-consciously cheesy lines, and there’s some great slapstick stuff to enjoy. Kids will seriously bust a gut with the Joker’s routine about ‘pants’, and even adults as grouchy as Batman might be caught smirking from time to time. And while the graphics aren’t exactly cutting-edge, they do more with plastic surfaces and coloured lighting than any Lego game before. The visuals might not be convincingly lifelike, but convincingly Lego-like? We’d certainly say so.

Why, then, the slightly downbeat reception? Well, the goal of Lego Batman 3 is, as the title suggests, to take the series ‘Beyond Gotham’. Out goes the familiar gothic city of the Tim Burton Batman movies and the animated series. In comes a bolder, more sci-fi plot involving Brainiac, alien worlds and the Green Lantern corps. 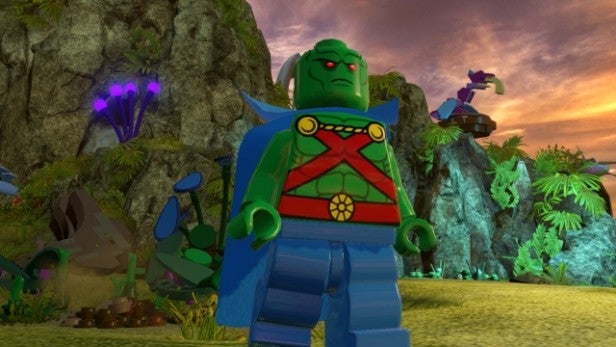 This approach has its upsides. The game suffers from  a slightly dull first chunk which focuses too much and for too long on the Batcave and the Justice League’s orbital Watchtower. Our grown-up tester started to get bored, our younger tester even more so. Then, suddenly and brilliantly the action goes all cosmic, with different planets to explore and some fantastic levels that play with scale  or defy expectations. At times, Lego Batman 3 is the most imaginative and playful Lego game you’ve ever seen.

But the downside? With Gotham gone there is no central open-world, just a series of levels tied together by a handful of hubs. There’s still a big endgame to enjoy once you’ve conquered the story; exploring every area, unlocking every character, finding every secret by taking new heroes and villains into the levels in Free Play mode, and there’s a whole mass of content hidden away. Yet the hubs just aren’t as interesting as Gotham was, with fewer distinctive areas and landmarks to explore, and while there are still vehicles to race around in, they don’t the same toy box feel. 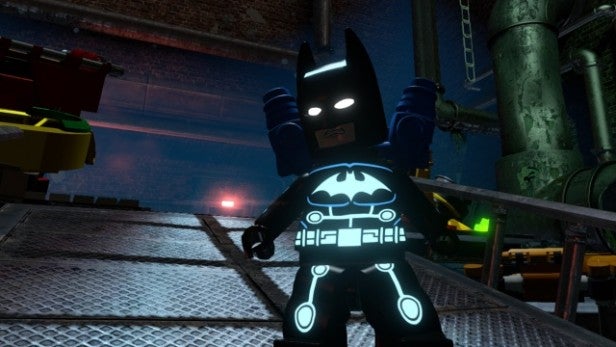 And that’s where Lego Batman 3 falls down. It’s a brilliant, funny and thoroughly enjoyable game with the best and biggest cast of any Lego epic – even if Lego Marvel Super Heroes wins on the familiarity front. Yet where Lego Batman 2 and Lego Marvel Super Heroes kept us playing for hours after we’d polished off the campaign, working to discover and unlock every last hero and villain on the map, we’re not so sure that the threequel has what it takes.

Meanwhile there is one further irritation: unwelcome celebrity cameos. We’re happy to see sixties Batman Adam West put in an appearance in the Stan Lee ‘person to be rescued’ role, but not so happy to see US talk show host, Conan O’Brien, bundled in for no reason whatsoever. While brief, his appearances are annoying, adding nothing and slowing down the flow. 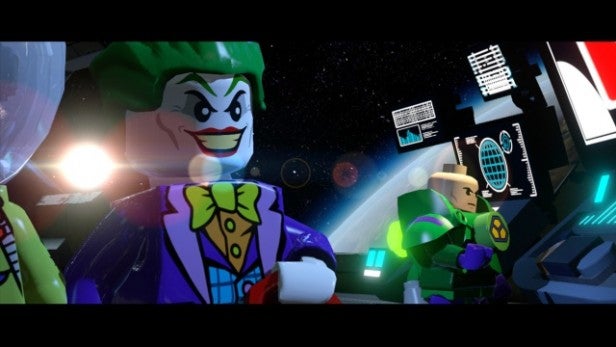 This isn’t by any means a bad game. It isn’t even a bad Lego game, and we’re sure it’ll be as popular this Christmas as Lego Marvel Super Heroes was last year or Lego The Lord of the Rings the year before. All the same, there’s something missing. It’s entertaining, exuberant and perfect for a spot of co-op play, but while lovable it’s still not quite as lovable as the Lego games that came before.

Verdict
On many counts this is the best of the Lego super-hero games, with some fantastic missions and a feast of characters and costumes. Yet without an open world to tie it all together it feels like it’s missing something at its core, and the pacing in the early missions could be better. It’s still a must for fans of the Lego games and DC Comics, but it doesn’t pack the super-powered punch of Lego Batman 2 and Lego Marvel Super Heroes.